Last weekend at the Modern Grand Prix, I competed under the camera in two features matches. You can find them here, here, and here. Commentator Martin Juza noted my brew of Azorious Legends seemed designed to defeat Hogaak. It was, but as we know, decks tuned to beat Hogaak only did so 45% of the time. In the post-Hogaak metagame, the brew may be even better.

I'm not great at Magic, but I can still have a great time playing it. If winning had been my primary goal at GP Vegas I would've brought Hogaak, but I find mirror matches boring. More than that, I wasn't likely to beat the better Hogaak players. What I do enjoy doing is testing, savoring card flavor, and expressing myself with original deck-building. For those reasons I brought something legendary.

I had worked on Boros Legends lists in the past, even played one at last year's GP Vegas, but after the printing of Lavinia, Azorius Renegade I realized she could make the deck good in Modern. In the Magic Story, she suspected Dovin Baan of corrupting her guild, so she heads off alone in search of truth. A private investigator, if you will. 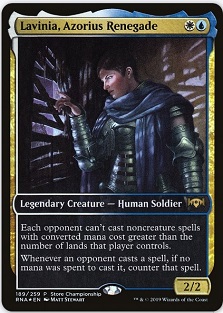 Lavinia will get to the bottom of the degeneracy of Modern and make certain players obey the laws of mana costs. Here's a short list of what she stops:

Hogaak no longer mauls Modern, but Lavinia may yet be relevant because of how many things she stops in the Whirza deck. Ensnaring Bridge and a wall of thopters are no match for Urza's Ruinous Blast. Ironically, if Urza, Lord High Artificer plays a large role in the upcoming meta, the Legends archetype may be even better positioned than when I played it in Vegas. In my testing, Legends was favored against Whirza and about 50% against the previous Modern field.

Speaking of winning half your matches, that is what happened to me in Vegas. I won my first four against Humans, Burn, Elves, and Hogaak. I lost the next ones against Hardened Scales, Dredgegaak, Dragons-Eldrazi (seriously), and Tron. The luck that put me on the play and gave me the cards I needed reversed in the second half of the day.

Before we go on, let's talk about that. I wrote previously how stoicism is important for Magic players. Ours is a high variance game. 20% of your win percent in Modern is likely determined by the die roll. You have limited control over your match wins. What you can control is how you react to your losses.

In Game 2 of my second feature match, I made a series of bad plays involving my Planeswalkers. Everyone saw it. Everyone watched me lose, likely because of my errors. I could well have tilted. I could well have decided to stop having fun. Instead I kept playing and got lucky enough to win an unfavorable matchup. Later, when I lost favorable ones against Hardened Scales and Dredgegaak, I did not get angry. I had set reasonable expectations and goals for myself. I kept playing and had the privilege of facing an innovative deck in the next round with dragons, Eldrazi, and Madcap Experiment. That deck versus my legends represented the true wonder of the Modern format, and I was able to enjoy it, even though I ultimately lost, because of stoicism. (The Dragons-Eldrazi player went on to 7-2 the day.)

Out of contention, I even chose to play the final round. I was happy to be paired against Tron. It wasn't a favorable matchup because it preys on midrange decks like Legends, but we do have tools to fight it. The night before I had even added a second key card to my sideboard: Hokori, Dust Drinker. I had it in my hand in my hand for the final game of the match and likely would've won, but my opponent cast Karn Liberated and decided to make me discard my last card.

Tron is an example of a bad matchup for the deck because it doesn't care about your best card, Urza's Ruinous Blast. Mox Amber allows you to play the legendary sorcery early enough for it to be relevant, and those two cards are the payoffs for playing Legends.

To enable your payoffs, you have to include some underwhelming legends. Isamaru, Hound of Konda is a good boy but not a particularly good card. Kytheon, Hero of Akros dies to all the one-damage pingers in the format. They both are still important to help accelerate with Mox Amber into turn two Geist of Saint Traft.

Because legends are useless in multiples, looting them away with Jace, Vryn's Prodigy is even more valuable. For the same reason I will test a few Gemstone Cavern going forward. The deck wants to accelerate and discard excess legends.

The young Jace, Geist of Sain Traft, and Thalia, Heretic Cathar are the more powerful cards in the deck, so I included three of each. The only four-of legend was Lavinia, Azorius Renegade because of the dominance of Hogaak. Going forward I would trim her to two copies, take out the maindeck Declaration in Stone, and test a couple Heart of Kiran alongside Jace, the Mind Sculptor.

I will now go over the sideboard cards and how to use them, briefly because the future Modern metagame is uncertain.

2 Leyline of the Void

Before we leave this article to begin testing, I will point out you have more options for Legends.

To discuss decklists and see my most recent brews, follow me on Twitter. You can also follow h0lydiva, who has played even wilder variants of Legends.