Last weekend I battled in CommandFest Seattle. Naturally, most people were playing Commander, but at the Saturday scheduled Oathbreaker event, twelve players shuffled fifty-eight card decks. We placed into our command zones lockets of Planeswalker and signature spell. I enjoyed the tournament structure, two rounds with a flat prize payout, and the games were intense. Oathbreaker presents high-stakes turns faster than Commander. Players start at only twenty life, and if a Planeswalker remains in play, you may cast their signature spell, which often snowballs advantage toward one player and makes them the archenemy. That is, if they don't win outright.

Oathbreaker games can be shorter than Commander ones but aren't necessarily so. If the players counter each other, killing opposing Planeswalkers each turn cycle to prevent them from executing their end game, then the suspense can stretch an hour or longer. Failing to kill a more dangerous Planeswalker in a turn cycle gives a player an opportunity to untap and win. And even those 'Walkers paired with less dangerous signature spells will most often kill you if you let them ultimate. At least, that's how I understood the format. Then one player cast their Planeswalker and ultimated it that same turn to effectively win, with The Elderspell.

It only took five mana and two other Planeswalkers in play to ultimate Liliana, the Last Hope. This strategy bypasses the most common way in Oathbreaker to interact with Planeswalkers, by attacking them. Stopping the combo requires instant-speed cards such as Counterspell or Hero's Downfall. Before we go onto the decklist, let's compare The Elderspell to other cards that destroy Planeswalkers.

For the cost of Dreadbore, The Elderspell can kill more and bigger enemy Planeswalkers than Hour of Devastation. Murderous Rider at three mana seems to be the going rate for instant-speed killing. At sorcery speed, only Spark Harvest is more efficient at destroying a single 'Walker. The Elderspell was pushed in War of the Spark, likely to make the card feel momentous. And by "momentous" I mean villainous. And by "villainous" I mean overpowered.

The Elderspell would be strong even if it only killed Planeswalkers. It also adds loyalty to one of yours. If you enjoy Doubling Season to immediately ultimate your Planeswalkers, you'll love The Elderspell. It costs less and is harder to disrupt.

In a format that revolves around Planeswalkers, I question if The Elderspell should be legal. But until it's banned, let's exploit it. Sure, its power as a signature spell is obvious, but what are your opponents going to do? Most decks require their Planeswalker to function, and you can pressure them to tap out with your zombies and cast your two-card combo faster than they expect with rituals.

The cards Duress and Defense Grid can protect your combo from instant-speed interaction. Better yet, catch your opponents defenseless by casting (or recasting) your combo faster than they expect with Bubbling Muck or Culling the Weak. If your opponents are cagey with their own 'Walkers, instead ritual other threats into play like Grave Titan or Liliana, Dreadhorde General.

The other Planeswalkers in the deck fulfill a secret function. You can target your own Planeswalkers and to channel their sparks through The Elderspell. If your foes let you, you can even use the sorcery to power out an ultimate for Liliana, Untouched by Death or Liliana, Defiant Necromancer. Remember, you can have multiples of the same emblem, and once they're in play, they won't go away, even if you sweep the board with Oblivion Stone.

Say your foes are wise to your plan. They either are holding up instant-speed disruption or refuse to leave two Planeswalkers on the battlefield, the number you need to harvest for your ultimate. So be it. Attack them with your zombies. Force them to react and tap out. Then execute your combo. 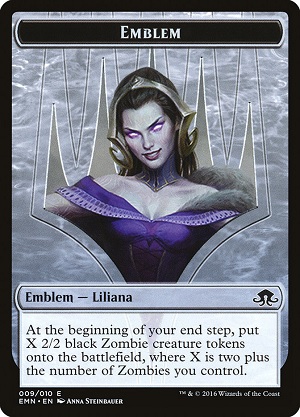 Once you have your emblem, win by attacking or draining. Vengeful Dead and Plague Belcher will kill your foes even if they wrath you. To speed things up you can even blow up the board yourself with Dead of Winter.

Liliana, the Last Hope pairs well with The Elderspell because she requires only four more loyalty to gain her emblem, and the combo takes only five mana to cast. But though her ultimate is powerful, it's possible to imagine gaining it and still losing. The same is less likely of another Planeswalker who also needs only four more loyalty. You may have heard of him.

In War of the Spark, Nicol Bolas lured all the Planeswalkers in the Multiverse to Ravnica. Then he gathered their sparks with his eternal army. Devouring them all would've made him a god, as immortal and omnipotent as he was before the Mending. In the official story, he was thwarted, but the ending could play out differently in your next game of Oathbreaker.

Again, the plan here is hold back your Oathbreaker until you can cast and ultimate it in the same turn. Casting The Elderspell should sweep away most of the opposing legendary permanents, allowing you to win the game for seven mana. Rather than traditional control elements, this list focuses on attaining that seven mana as efficiently as possible, protecting the combo from instants, and discouraging attackers in the meantime with Propaganda and No Mercy.

If you untap with Overeager Apprentice or Bog Witch, you'll likely win. The other Planeswalkers in the deck are snacks. They are low power, and your opponents may not prioritize killing them. But they have to, or you'll drain their sparks with The Elderspell.

When The Elderspell wins you the game outright, why would you do anything else? And if it's a clear best strategy that's hard to interact with, then perhaps it should be banned from the format. In the meantime, you can play with it if you wish, but at the least you should be wary. If you see The Elderspell across the table as a signature spell, rally the other players together. Make clear the card's dangers. And if a Black mage tutors their deck, beware! Treat the threat of The Elderspell like a turn-one Sol Ring in Commander. Everyone should unite against this archenemy. 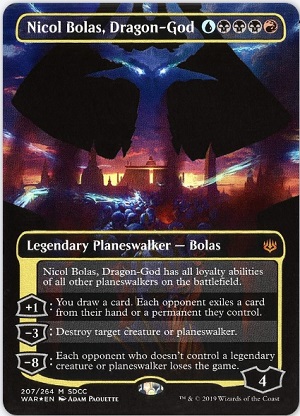