The first thing you should know is that Chandra Nalaar is bi. She's queer. She may even be pansexual, meaning anyone can set ablaze her fires of romance, regardless of their gender identity. In the past she kindled for Gideon. During her time in the Gatewatch she smoldered hotter and hotter for Nissa Revane, who is decidedly female.

The second thing is that Chandra and Nissa are together, partners, an item. They fit in the same Oathbreaker locket. In this new multiplayer format, Planeswalkers serve as commanders, and as long as they're in play you may cast their signature spell from the command zone. Each card has its own individual commander tax. When Planeswalkers are partners, they live in the command zone together, each with their own signature spell.

To cast Fall of the Titans, Chandra, Bold Pyromancer must be in play. And if you also have Nissa, Genesis Mage you can cast Rude Awakening, untap four lands with her +2, and activate surge in Fall of the Titans, as happened in the conclusion of Battle for Zendikar. Nissa connects to the land's worldsoul to help power Chandra's fire. They work well together, and they're closer than coworkers. Their partnership has been implied for years. Other Planeswalkers like Will Kenrith and Rowan Kenrith have their partnership written explicitly on their cards, but in this casual format there's nothing wrong with Chandra and Nissa from Planeswalker Decks in your command zone together holding hands. Your friends should know what's up, and if they don't, be bold with your pride.

Overgrown Battlement and the other defenders can provide much-needed acceleration, but they're mainly to give Chandra and Nissa some privacy from attackers. Spend the first few turns ramping and hoping people have better things to do than break up these Gruulfriends. The battlefield should be cluttered with other more powerful Planeswalkers.

The Oathbreaker format was so named because it pits Planeswalker against Planeswalker, with no oaths of unity between them. However, in the lore, Chandra and Nissa both took oaths to join the Gatewatch. More than that, they bring out the best in each other. Nissa's Tranquility helps Chandra focus her tempest of emotions. Chandra's fiery spirit draws Nissa out of her closed gardens to experience new wonder.

They grew closer together during the Gatewatch arc, until their defeat at the hands of Bolas on Amonkhet caused Nissa to leave in Broken Bond. The Gruulfriends seemed to be no more, but their relationship would Grow from the Ashes. Nissa returned in War of the Spark: Ravnica.

"But Chandra barely noticed the towering elemental, or the chaos in its wake. Nissa Revane was her entire panorama. Chandra's eyes filled with tears, though she was already burning so hot that the tears instantly turned to steam. She watched rapt as Nissa descended, leaping lithely from balcony to terrace..."

The relationship between Chandra and Nissa was the best part of the first War of the Spark novel. The story had issues, trying to do too much too fast, but at least one of the many plot points was making Gruulfriends official.

Chandra smiled, and together they set off once again for New Pravh."

"As they left New Prahv behind, Chandra smiled at Nissa. And Nissa smiled back. Everything seemed so right, Chandra just knew they were going to win."

After the death of Gideon, Chandra admitted she had loved him. Nissa was there for her as her grief roared.

"This time her tears did not turn to steam. They ran freely down her face, and Nissa surprised her by reaching out and wiping them away with her thumbs. Chandra leaned against the elf.

Nissa stiffened for a moment. Then she eased her body and allowed Chandra to rest against her. She put an arm around the younger woman's shoulder and even began to slowly, gently rock the softly sobbing Chandra back and forth.

Without looking at her, Chandra whispered, 'I love you, too, you know.'

Nissa whispered back, 'I love you as well, Chandra.'"

The community had been rooting for #Gruulfriends for years and considered the matter beautifully settled. You may have heard differently after the release of War of the Spark: Forsaken, but never mind that. It's not canon. Beyond what we read in the first novel, their love was established in the card rules themselves. Amy the Amazonian was the first to notice. 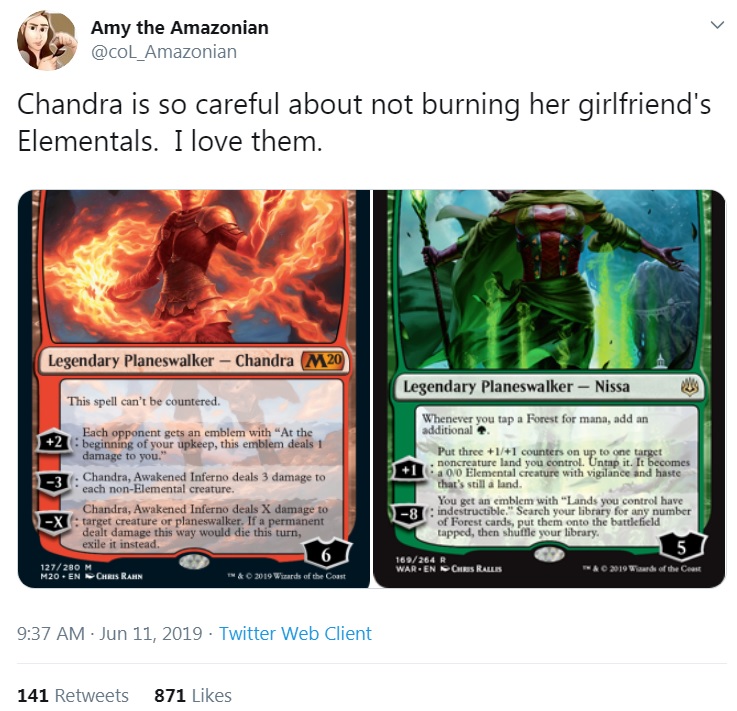 Imagine those two powerful women together in the command zone. The awakened inferno of their love would shake the world. If you present them as an Oathbreaker locket, your opponents are more likely to object, out of fear. What could withstand the synergistic strength of their love? Only mighty decks could compete. Make certain your friends are up for the challenge first by asking them if you can play these Gruulfriends as partners.

In this deck, Nissa goes tall with Awakening of Vitu-Ghazi and Chandra goes wide with Tempt with Vengeance. Your artifacts all synergize with the latter, and Vitu-Ghazi loves gaining trample from Embodiment of Fury.

As the locket provides such strong late-game cards, the maindeck is focused on cheaper elementals, many of which accelerate. Catalyst Elemental or Generator Servant can power out a turn four Chandra, Awakened Inferno. Her sweeper doesn't kill your elementals, but they can still die to opposing ones. Hasty threats such as Hell's Thunder and Hellspark Elemental can get in quick hits around sweepers and burn away opposing Planeswalkers before they ultimate.

Chandra raises a lot of hell in this deck. It's majority Red and requires more Mountain and fewer Forest cards. That hurts the passive of Nissa, Who Shakes the World, but relationships always require compromise. I also had to change my initial game plan. I had wanted Chandra's signature spell to be Decimate, but although the deck is Gruul, the signature spell has to match its corresponding Planeswalker in color identity. To play Decimate we would need a combined card for Chandra and Nissa, similar to The Royal Scions. Alas, Wizards of the Coast has not printed such a card.

A good way to avoid over-committing into wraths is by playing more Planeswalkers. Chandra, Flamecaller can burn away one or even two opposing Oathbreakers post haste. It's always important to note that if you have two Chandra cards in play at once, that's not a flavor fail. It means she's committed enough to bring multiple areas of her expertise to the battlefield.

One great thing about Magic around the kitchen table or in casual multiplayer games is that you can decide how to play it. The only rule is to have fun. If you want to partner Chandra with Nissa, find friends who will enjoy that with you. Another wonderful thing is how making our own decks and playing with our cards allows us to tell our own stories. Begin with Once Upon a Time, and if you wish it, end with Chandra and Nissa together happily ever after. 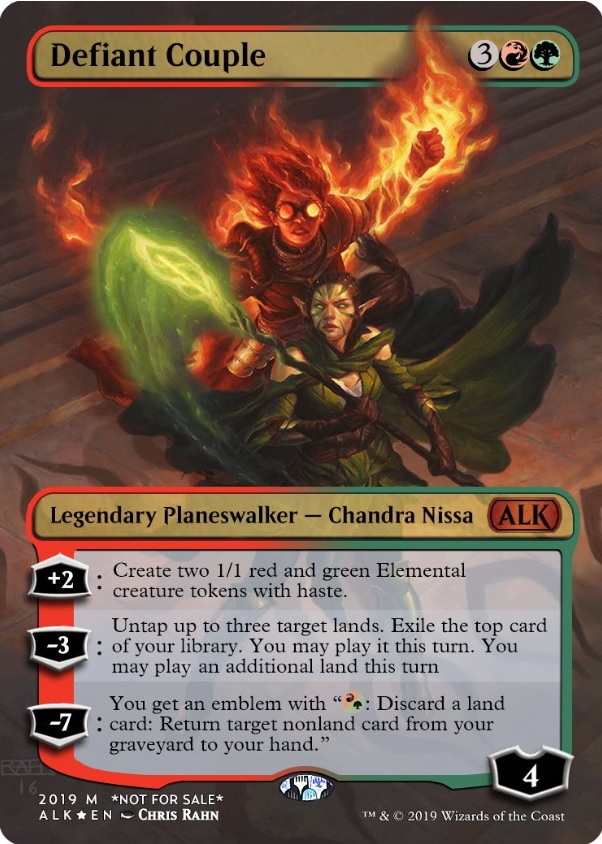