If you know one character from Magic's history, it should be Jeska. The renowned men, such as Urza and Teferi, generally made a mess of the Multiverse. The time rifts they left would've caused everything to implode into a black-hole of anti-magic, if not for a barbarian named Jeska.

As of writing this article, this card is woefully underpriced. It's time we showed Jeska a little respect, and it'll be up to you to educate your foes by crushing them on the battlefield. They may have heard of the young Radha, Heir to Keld. Pretty fierce, right? Well, Jeska, Thrice Reborn kidnapped her on her quest to close the time rifts and save Dominaria in the most brutal way possible. Jeska cauterized the temporal hole left after Teferi's Protection and sacrificed her own life to stop the collapse of the Multiverse.

You could well partner her in Commander with Dargo, the Shipwrecker, as three times seven commander damage is twenty one. But today I'll focus on another casual format, Oathbreaker, where everyone starts at twenty life, and she's ready to slay, even without a partner. I'll include a secondary Rakdos decklist, but first I'll let her stand alone.

You may have noticed this sorcery also in the command zone. In Oathbreaker, every commander is a Planeswalker, and as long as they're on the battlefield, you can cast their signature spell (taxed two more each time). I recently talked about this new format with Shivam Bhatt on Casual Magic, which should release soon as a podcast. I told him I hadn't built a deck with Goblin Guide yet, but I well could. Here, our favorite aggressive threats have value, which they would lack in a forty-life format.

Even in casual formats I like my decks to have a clear strategy. Today we are deploying cheap creatures with high power, like Goblin Rabblemaster. Then we're casting Jeska, Thrice Reborn, tripling our goblin's damage, and attacking for the kill. If needed, we will cast a pump spell like Brute Force, which deals nine damage for 1 mana thanks to our Planeswalker. Should any of our opponents try to kill our creature in response, we'll brush the spell away with Deflecting Swat, which we can cast for free the first time.

The sequencing is key. We want to have a creature already in play, without summoning sickness, to attack with. We retain priority once Jeska arrives in a cloud of dust and fury, and we immediately zero her, targeting our creature. Casting Jeska, Thrice Reborn and waiting to deploy a later threat is a losing proposition. She only has one loyalty the first time, and Oathbreaker decks are bristling with ways to interact with 'Walkers. That's why we're not playing cards like Ball Lightning. As appealing as supercharging that card is, it's not practical. You would have to cast both spells in one turn, which is a more reasonable play with Spark Elemental, which can do a quick nine for one

If by some happy chance Jeska does survive a turn cycle, perhaps because you slew the most threatening foe, then you can cast a bigger creature, give it haste, and attack for even more. Territorial Hellkite is naturally speedy. Eater of Days will need some help to get haste, but you may not even need Jeska to make this leviathan lethal. I included this horrifying artifact for the lols. Clearly, you don't want to play it except as a finishing move.

While some goodstuff Red creatures will be familiar, like Rampaging Ferocidon, others may well seem questionable, such as Chained Brute. Think of this devil as a 4/3 blocker, which can sometimes kill someone thanks to its high power and Jeska. Blocking is critical in this format, and life is your most valuable resource (as opposed to Commander, where cards in hand are more prized). Because hit points are so important, Vexing Devil poses a dangerous question to the table. Will one opponent take it for the team? In doing so, they put themselves in lethal range to the rest of your deck.

Just because you're playing Red doesn't mean you can't also win at politics. When Vexing Devil goes on the stack, you can reassure certain players if they let it live, you won't attack them with it. Or you can single out a single foe, the most dangerous deck on the table, and let the others know you're going to bedevil that player for the greater good. Instead of letting yourself be portrayed as a villain, pump yourself up as a hero for taking out someone before they can combo off with Ral, Storm Conduit. You may not be able to negotiate the survival of your own Planeswalker, but it won't hurt to try. Remember, you can always offer to target an opponent's creature with Jeska, if they have a spicy one. It also bears mentioning that our aggressive strategy won't seem out of place in Oathbreaker, which is another difference with that format compared to Commander.

Now let's talk evasion. Clearly, we can't afford to let Jeska bless Greater Gargadon with sublime rage only for the beast to be chump blocked. Though we're playing the best Red menace threats, the primary way we're getting through is with trample. Say we equip Greater Gargadon with Shadowspear, and our opponents line up blockers with a total toughness of five. Then four trample damage will get through, which Jeska would triple to twelve. We would also gain seventeen life. This will often be more valuable than slaying a foe, and we'll look into more lifelink creatures in the multicolored version of this deck.

Our other fearsome equipment grants trample, O-Naginata. Equip it to Bonecrusher Giant, and Jeska now has a lethal attacker. I was torn about Embercleave, as it will often cost four or five in our deck, so I included it in the second list but not the first. Some of our pump spells also give trample, and if you feel the deck needs another, you could always swap out Brute Force for Rush of Adrenaline or Invigorated Rampage. As we saw with the Greater Gargadon example, trample isn't perfect evasion. The blocked power isn't tripled by Jeska. For a solid hit we'll need to fly over our opponents' defenses. For flying threats cheaper than dragons, we'll require a secondary color. If you wish to go this route, Jeska's partner ability allows it, but we only have one option: Tevesh Szat, Doom of Fools.

The crazy thing is in Oathbreaker, not only do you get to play two commanders with partner, but they both have their own signature spells. That means you have a starting hand of seven plus four cards in the command zone. This will influence our deck-building, in that I won't worry about discarding a card here or there, especially if it's Anger.

For selecting our signature spells, you could always go flavor first, playing Jeska's Will and Szat's Will, as suggested by Weirdcards. But also in terms of lore, Jeska and Szat have nothing to do with each other. I prefer the free spells for these Planeswalkers, as I expect to tap out the turns I play them, and if they survive to my untap phase I'm already happy.

Delving into the forbidden tombs of Black grants us some truly scary creatures. Hunted Horror into Jeska, Thrice Reborn is quite the curve. The

does strain our mana, but it's something to dream about while you cackle to yourself. And don't concern yourself with the two centaur tokens. Those aren't a downside in a multiplayer format. Use them as political tools to win over an ally. The same is also true of any tokens produced by Wanted Scoundrels and Varchild's War-Riders.

The other boons to playing Black are the keywords flying and lifelink. The former will let you get a clean kill, and the later will let you survive a turn cycle to attack again. We get both at once on this nightmarish creature.

Though we have many ways to discard Anger in this deck, we won't always have a Mountain. You could play more fetch lands rather than cheaper multilands. It would also increase the strength of Zektar Shrine Expedition and Kroxa, Titan of Death's Hunger. I wouldn't go that far for a casual deck. Neither would I include The Elderspell by default, but again that's something you could do to make the deck more cutthroat.

So, which version of the deck would you play? Tell me in a comment, and also if you think of some sweet tech, do share it. If you want to see other Oathbreaker strategies, feel free to explore my earlier articles.

Before closing I should mention why Jeska is called the Thrice Reborn. As you might imagine, it's a long story, and the stories in the early era of Magic were often bizarre and not necessarily worth telling at length. Suffice it to say when the Cabal attempted to murder Jeska, her Planeswalker spark instead brought her back as Phage the Untouchable. Her cursed existence was ended by her brother Kamahl, but dying in close proximity to Akroma, Angel of Wrath, combined them into a new being: Karona, False God. That was her third birth, but her story was only getting started. Later she regained her true nature and saved the Multiverse. What a gal! 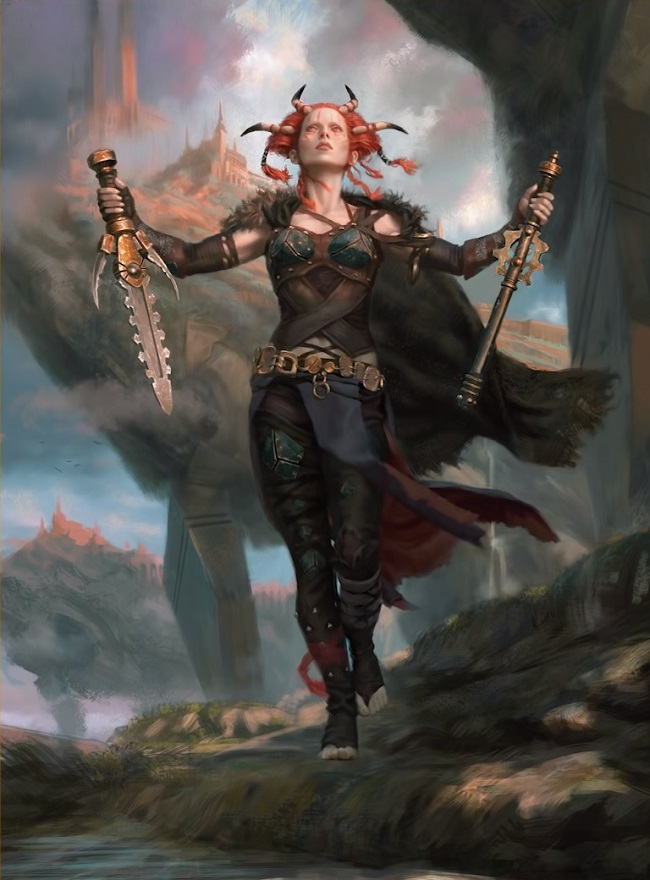