So Peregrine Drake did not get banned. While I was not surprised that nothing changed, I had hoped Wizards would take aggressive preventative action. When I look at Peregrine Drake, I see a card that has not started from zero in the format. Drake was easily able to pick up where the combo half of Cloud of Faeries left off. Even though this was the case, Drake was only legal for a few weeks before the Eldritch Moon Banned and Restricted list update was revealed. While there was much talk leading up to Monday, July 18th, there was no action.

Instead Pauper received a call out in the July 18th Daily Magic Update. What I consider the relevant portions of text have been quoted below:

âThere was some chatter that Peregrine Drake, newly made common by Eternal Masters, would get the axe due to its rising popularity and power in Pauper. However, the rise of the Drake is relatively recent, so it survived this time. Whether it survives the next one will be a function of what happens in Pauper in the meantime.â

âThe rest of the deck is a blue-red control shell, packing cheap removal, card draw, and counterspells, in that way reminding many people of the old Splinter Twin deck in Modern. That kind of power in Pauper certainly gives some people pause.â

There is a lot packed into these statements. First is the acknowledgement of the temporal conditions of the announcement. Reading into the first quote, it appears Wizards can see the issues Peregrine Drake is causing in Pauper. The ominous âwhether it survivesâ line indicates that the Drake is on some unofficial watch-list.

If that does not provide some food for thought, then maybe the rest of this article will provide a feast.

Pauper, for whatever reasons, attracts players that become highly invested and emotionally attached to the format. I am not trying to delve into the psychology of this because it is a statement borne of my own experiences and observations. In other words, I have seen people form strong bonds to strategies, and I myself care deeply about the format. It is why I try to correct for my bias with data.

It is easy to claim a deck is overpowered after losing to it, but that represents a single point of information. Years ago I started to keep track of the Pauper metagame to try and understand if these feelings were just sour grapes or were a notion that something is actually going wrong. Back when there were Daily Events, I started tracking every reported 4-0 and 3-1 and weighed their standings in a manner similar to Frank Karstenâs metagame math (before simply adopting that method). In every different iteration of competitive Pauper, from 8-person queue results to three round Daily Events, to the current Leagues, I have been recording what wins in an effort to understand the overall landscape of Pauper.

Now, every so often I come across a new idea that spurs me to create a new chart in my spreadsheet. The presence and apparent dominance of Peregrine Drake was one such moment. While Eternal Masters season is only a few weeks old it is nearly over and Drake has barely dipped below 20% of the metagame. What I wanted to explore was exactly how it stacked up to the other archetypes. So I made a new table that tracked every event (38 through the writing of this article) and attempted to provide a day-by-day image of metagame development. 340 decks later (and average of just under 9 per event), this is what the Pauper metagame looks like: 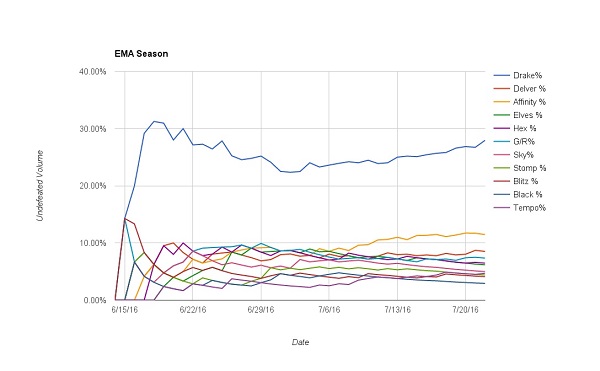 The data set is of course, incomplete. A maximum of ten 5-0 decks are reported per day which leaves a glut of 4-1 and 3-2, performances one could qualify as âsuccessfulâ, out of the mix. It also excludes winners 11 and above. All that being true over time such results may not be able to tell us the exact location of an evergreen, but it can surely provide information about the layout of the forest.

A few notes before diving deeper into the results:

With that out of the way, letâs get granular. 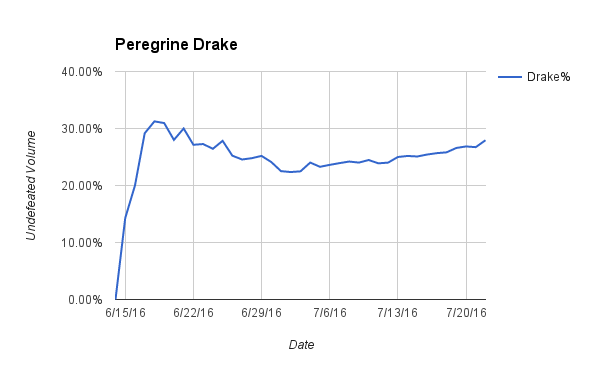 Drake decks have defined and dominated Pauper as of late. They achieved an apex at 31.25% of the metagame 3 days into the season but bottomed out two weeks later at 22.36%. Since July 2nd, they have steadily climbed in popularity to almost 28% of the undefeated metagame. There is not much to say that cannot be shown in the chart. Simply put, Drake is the best and is fairly insensitive to the relative success of other decks. 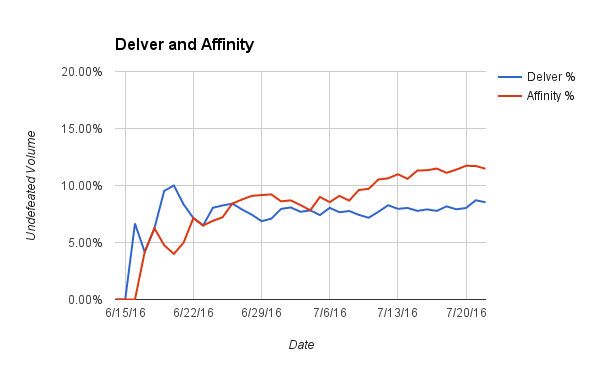 These two decks have a history. Delver, regardless of everything going on around it, has consistently been one of the top performers in Pauper. Affinity has also been near the top due to its raw power level but has largely been held in check by the presence of Gorilla Shaman and other strong artifact hate.

Delver started out strong, but has largely leveled off and maintains around 8.5% of the undefeated metagame. Affinity is one of the few decks to maintain an upward trend over the past five weeks. Delver is a strong deck but it is under attack from the saturation of decks players are running to try and defeat Drake. Pauper players have decided that the best way to fight combo is to go under or present multiple cheap threats, and these are strategies where Delverâs strengths are mitigated. Despite this, it is still one of the five most popular decks.

Affinity is benefitting from the fact that very few of the decks people are running out there are capable of running Gorilla Shaman. That is not to say these decks are not Red. Rather, the time constraints placed upon a deckâs desire to win, Red Deck Winâs need to use all its mana every turn for haste creatures and Goblin Heelcutter, make it so the Mox Monkey rarely gets a shot. Combine this with the fact that Black based control is at a nadir and we get a metagame where Affinity thrives. Black controlâs emphasis on creature kill helped to keep Affinity in check and with that strategy largely absent the robots are taking over. 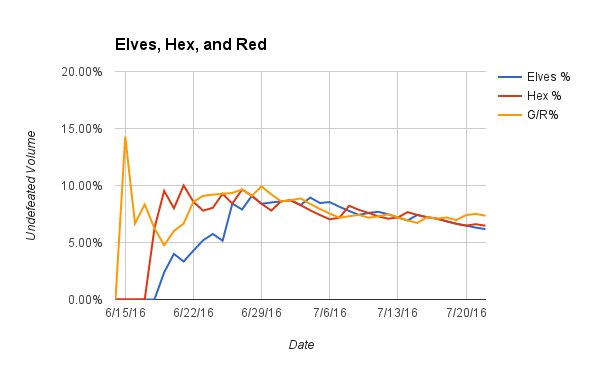 These three strategies were picked up as a way to try and defeat Peregrine Drake. All three attempt to race the combo in different ways: Elves tries to go wide with Priest of Titania and Lys Alana Huntmaster and tall with Timberwatch Elf and Elvish Vanguard. Hexproof wants to create an unsolvable threat and tends to thrive in a metagame where Black control is absent. Goblins and Red Deck Wins both want to soften up a life total with creatures before sealing the deal with Lightning Bolt.

Despite early returns, these decks have been trending down. Whether this is because they are unable to keep up with Drake and other invisible metagame factors, or people are abandoning them for better strategies is unclear. If pilots are jumping ship, the most likely options are Drake decks and Affinity, the only two making gains. 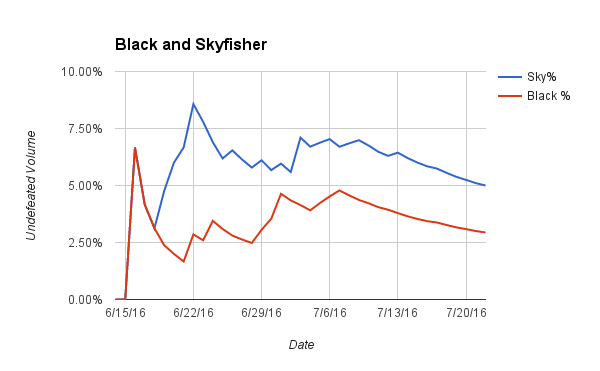 The last area I want to explore today are the performances of Black-based control and Kor Skyfisher-based midrange decks. Both of these fall firmly into the âmidrangeâ camp and have been staples of the Pauper metagame for years. Rarely world-beaters, these two buckets often find themselves in and out of the top five strategies on any given season and rarely tumble below 5% of the aggregated metagame. Right now Skyfisher decks are hovering at exactly 5% while Black control decks are under 3%. Considering the raw power of some of these cards, Gray Merchant of Asphodel comes to mind, this is a tad surprising.

And at the same time, it makes sense. These decks used to have strong endgames but they have been completely supplanted by Peregrine Drake. When turn five rolls around, it is much better to be casting Drake and doing broken things than it is to attempt to drain your opponent for multiple life points.

Taken together the old structure of Pauper, tempo, aggro, and midrange, has been replaced with and triumvirate of combo, aggro, and tempo. In it of itself, this is not a bad thing. Other powerful formats have similar looks but are able to adjust in part due to the strength of potential answers. Pauper is a different animal entirely. As shown, Drake is a dominant force that is the best victory option for both combo and control decks and it is slowly forcing other strategies out of the format.

It is still early, and Eldritch Moon may very well bring about a change. The ability to go Fierce Empath into It of the Horrid Swarm is attractive, and could apply pressure to Drake decks before they can assemble the pieces. Black control could come back in force with Ravenous Rats on the two and Okiba-Gang Shinobi on the four. In other words, I am not ready to declare the format under the totalitarian rule of Peregrine Drake just yet.

But numbers donât have emotions; and, if these are to be believed, if these trends continue, then come Kaladesh it is very likely for Drake to take flight for good.