"You need an introduction!" Trick yelled, so I will comply. I'm Mike Linnemann, a writer by trade. My last name rhymes with 'cinnamon' because I'm all about the flavor, which is why I'm here.

I work for a science non-profit in Minnesota overseeing grant writing by day and writing flavor text for Wizards of the Coast by night. (You'd be surprised how many scientists and engineers play Magic FYI.) You can find me on them internets on Twitter: @vorthosmike likely yelling at uninformed Vorthos players or yelling at the hivemind. I'm passionate about this game and something that has caught my art history major eye: alteration.

Let us take a thorough examination of the current and future state of alteration in Magic: The Gathering.

Before I delve in, for those aren't up to date on what an altered card is, read Customizing Your Collection by Aaron Forsythe, A Practical Approach to Handling Altered Cards by Claire Dupre, Alterations Guide by David de la Iglesia, Altered Cards on MagicCardMarket.eu, and A Tale of Card Alters by Noah Winston.

This uncommon occurrence is now a mainstream observation and transcending from a blurry camera picture uploaded to them-interwebs to a kitchen table near all of us.

At best, an alteration creates a vision that the card didn't have before, unleashing an alternate reality of the artist's or patron's inner, or hidden, vorthos. He or she will appropriate the prior usage and create an assemblage of something entirely new, foreign, beautiful and meaningful.

At best, an artist creates a Rauschenberg-esque piece, mixing and matching styles and experiences to create a derivative work:

At worst, well, you've seen the terrible ones. They have paint rippling across the card and Picasso-esque faces. (Unintentionally cubicle.) I'll omit these. You know you've seen them.

This is more than a trend. It's a revolution of empowerment that the player believes he or she is entitled to create. It creates a deeper connection to the game and is making Vorthos a psychographic that is finally marketable. Vorthos players have found something to grasp onto besides flavor and storyline.

Digital art has become the norm for most of the art generated from the creative department on the Jarvis side of Wizards. Oil painting takes days to weeks and changing entire areas from a commission take a similar amount of time. Digital art isn't easier; it is just arguably the best medium for commissioned art for changes and corrections. As the digital medium has arisen, oil, acrylic and watercolors have become quite rare indeed to find. Pertinent to players, and Vorthos players more specifically, "original" pieces of Magic art no longer exist. We have a simulacrum or prints for sale at conventions. These prints have replaced artist proof cards and original art has been replaced by alterations, ideally from the original artist. Many Vorthos players, (usually), wish to have a piece of art, but when the cost to join is hundreds of dollars for a jank common, it's considerably easier to get an alteration instead. Thus, the demand is dwindling.

This is in addition to the recession's effect on the art market. (One can buy an original Warhol for $15 and a bag of chips.) Owners have kept Magic's original artwork prices relatively stable throughout the recession, despite the art market's plummet. Magic has a finite amount of original artworks but the costs are quite high for the remaining pieces and the information on each piece is quite low for collectors. For example, why doesn't StarCityGames name what medium the art is on their site? Oil paintings aren't acrylic and stretched canvas isn't the same as Dwight Scrute archival paper ISO 11108.

Formality of an Alteration

Becoming a fantasy artist and breaking into the biz is not for this article, reading Jon Schindehette's ArtOrder blog is the best starting point. He is the de-facto mentor for all new and aspiring artists. If you're interested, read it daily. What is relevant is to alteration how an artist can, in theory, use an informal altered art piece in his or her portfolio and exhibit said work to an art director at a convention during portfolio reviews. During these reviews Jon Schindehette (D&D) or Jeremy Jarvis (MTG) will comment on the art, give tips or insight into how to improve and if they're impressed, ask for a takeaway to remember the artist. (They do hundreds of reviews.) This takeaway can easily be an altered Magic card and showcase their strengths directly as applicable to a commission. "Here's my version of a Serra Angel on a card."

If this hasn't happened yet, I know it will. (Conversely, an artist who makes a four-page, mini D&D supplement will be lauded as genius.) It's simply too convenient for an artist to align him or herself to another's brand to showcase their skill in dragon painting.

This informality of alteration could create an end-product created piece which is quite awful for student artists. I'll summarize and tell you that it corners them into a mindset of omitting the process. The process itself is what makes art, well, art. Andy Warhol could tell you that he believes Campbell's soup is the symbol of the American's embrace of consumerism, or he could paint a picture of a soup can. A picture still tells a thousand words and it has impact on culture. Drawing another portrait of a half-naked woman holding a sword or a dragon perched on a mountain tells no story, it has no meaning, and it's.... worthless. Alteration can dwindle the supply of artists who truly innovate and push the medium forward.

Artists can also use this informality and time savings for professional submission. Could an artist submit an altered card to Spectrum? Spectrum is the annual compilation of the best in Fantastic Art. Arnie and Cathy Fenner have artists submit their works with a small fee and choose the best pieces of the year with the aid of professional art directors and artists. Wizards of the Coast used to have 1-2 pieces a year. They now have over a dozen each year accepted. Jeremy Jarvis has motivated his artists to create genius. Would said art be considered unpublished work? Institutional? How many copyright lawyers would it take to stop an altering artist?

Let us take a look at an alteration: 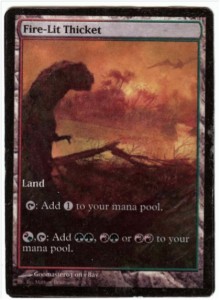 Can this photo be considered an "original?"

Since it uses the copyrighted symbols of

, and border, is it a collage?

Is it considered "after the original?"

The complexities alone are numerous and copyright laws are beyond vague.

Time Spiral used this technique on purpose. See below for an example on Thorn knights. Keep in mind that if an artist recreated his or her work, it isn't "after the original." Balance and Restore Balance would be said exception because it's the same artist: Mark Poole.

("After the original" is an art term done in the style of a particular artist by other than that artist. If the artist had no creation or supervision and had no involvement at all with the edition, then each piece in the edition would be considered as "after" the artist. It does not connote after the artist's death. See Robert Indiana and Marsden Hartley for an example below.)

The foiled power nine fakes popping up constantly on eBay are necessary for the game. Proxies can be stickered onto cards, (Ever play-test a commander deck?) or the ever popular permanent marker, but for usage in cubes, reserve list cards are in high demand. The Gaming Etc. tokens for the Power Nine have alleviated the demand for a real card to some extent and some alterations are quite good. Using Volkan Baga's art from the Vintage Championship each year has been largely positive. What I find difficult is that the foil power nine reproductions are usually so awful.

Marginal reproductions are bound to happen in every culture and have occurred since Etruscan pots. (A local museum that I worked at in Minneapolis had dozens of fakes in their permanent collection. But even a 500-year-old fake is still wicked old.)

There really isn't a way around the issue. Should we revert to using markers on forests? Is that really better? Really?

The demand, personal expression and necessity are reasons why Wizards hasn't clamped down on all alterations. Blatant copyright infringements on eBay or third party forums are bad for business, but to squash the individuality of the casual player and the majority of their market, they have little choice but to turn a blind eye unless it's systemic. What is a systemic operation? If a business makes hundreds if not thousands of these altered cards, it's systemic. Think Korean camps of World of Warcraft players mining gold for resale on the secondary market. That, my friends, won't fly. Gnat Alley Creeper swinging for three to your face if it tries to fly.

These "farms" will be trained by a Bob Ross-esque personality. They will us quickened techniques but devoid of independent skill and talent. Watch more than five Bob Ross shows and tell me how much creativity is really involved. Is extending the borders of Magic cards so different? If you've seen one extended art Dark Ritual, you've seen them all. It's also the reason that Terese Nielsen's Force of Will's are so unique. Because they take a large amount of independent thought, creative grease and talent forged of time and effort, not merely blending colors to a landscape.

Look at the following examples of figures extending out of the frame, boxes becoming an area for art and the frame itself extending beyond the card.

The demand is for the medium, the card frame, to change and it has been. Future Sight played with this already but it didn't feel quite right. They will perfect an idealized card I assure you.

They will have YouTube videos detailing how to do it. Fantasy Flight Games, my neighborhood gaming company, has modeling master classes on their website for altering Warhammer pieces. Check it out. Would it be so far fetched for Wizards to do the same? They could sell the paint, the blank foil cards...

The only definite thing we know is that the trend isn't going to die anytime soon and that marginal alterations will always be present at a commander table near you.

There's plenty more, but I need to get back to painting my happy Grixis skulls.