One unfortunate thing Iâve had to deal with as I improve as a 3D alterer is that the better I get, the longer it takes me to make a card. You might be surprised to learn that; it definitely surprised me, since I was expecting the opposite to happen. Itâs true that as I get more experience, I become better and faster at the individual skills involved, from visualizing layers to cutting pieces to gluing things together. However, as Iâve improved, Iâve also changed my approach to making cards.

When I first started making 3D cards, I worked almost exclusively with basic layers. I usually did a bit of detail work, but not very much. Most of the first fifty or so cards I made were chosen because they had art that I knew would be easy to alter.

Since I started working on Commanders, thatâs no longer an appealing option. If I chose my Commanders based on how easy their art is to 3D, Iâd be stuck with decks led by guys like Tobias Andrion. Occasionally, I find a good one that can be made 3D almost entirely with simple layers, like my Atogatog: 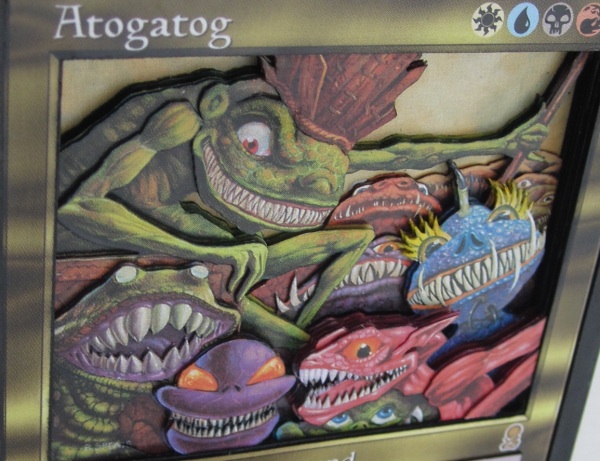 Other times, I find myself working on cards that have very little going on in the art other than the Legendary creature. Making this partially foiled Mangara of Corondor was challenging because I couldnât figure out a way to 3D the storm that would look good, so I only had Mangara and the ground beneath his feet to create depth. 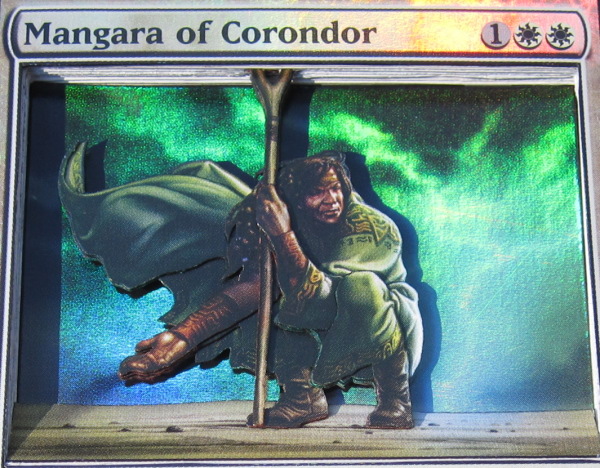 Recently, Debbie (wonderful editor, co-host of Avant-Card Show, creator of the Llanowar Sentinel) contacted me about making 3D cards for a couple of her co-hosts. Both of the cards chosen were ones that I had wanted to make for a while: Jenara, Asura of War and Brion Stoutarm. However, they also both were similar to Mangara in that most of the 3D would be in the main character since there is little else in the artwork of those cards.

Today, Iâll be going through the process for making a 3D Brion Stoutarm. You can also jump to the end if you want to see the completed Jenara.

At this point, I often take some time to stare at the cardâs art and figure out what my starting layers will be. 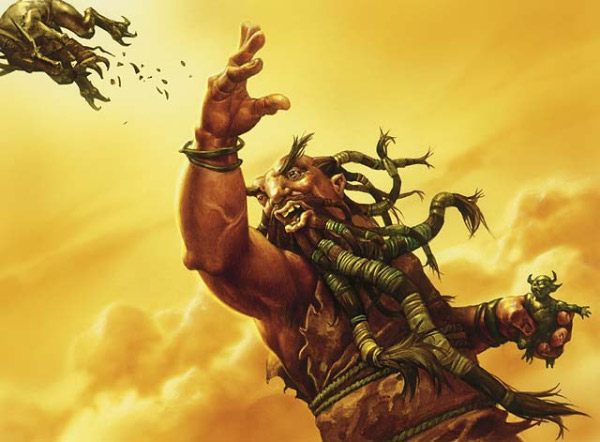 As I said, itâs pretty clear that there wonât be much in the way of basic layers. Thereâs the goblin in the foreground, Brion in the middle, and the sky in the background. What this art has a lot of is overlapping details. A few stand out to me immediately:

Because I know that I will be doing a lot of detail work on Brion himself, I know that Iâll want a lot of large scraps to work with. This means that Iâm free to make each piece of the goblin that Brion is throwing into its own layer. I start with those: 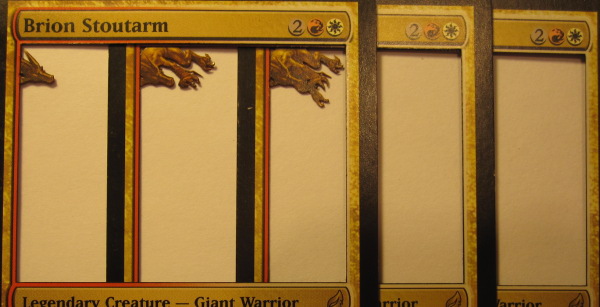 These three pieces will be stacked to make the goblinâs body.

Next, I cut my primary Brion Stoutarm layer: 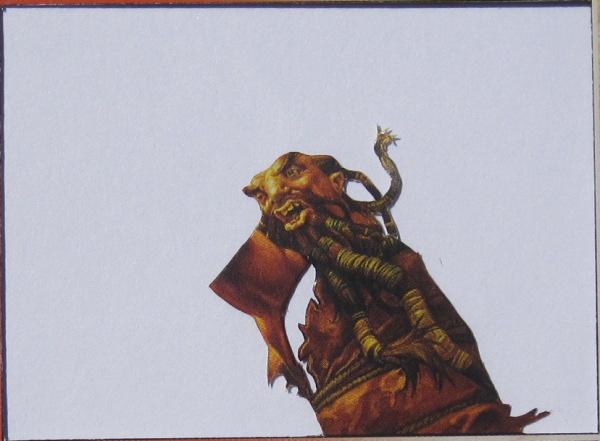 When I cut it, Iâm not sure if that is what it will look like in the end, but itâs a good place to start. Some parts may need to be removed later.

The first time I cut Brionâs right arm, I leave his entire hand intact, but eventually decide to feather out the fingers, so I cut his index and middle fingers off of the arm.

After assembling the arm and testing how it looks inserted into the primary Brion layer, I decide that the part of Brionâs shirt that borders the arm hole needs to be shaved down: 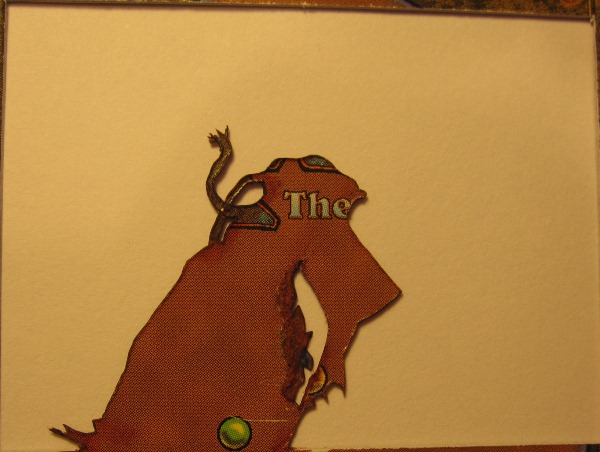 For the giantâs left arm, I use two copies of his arm to cut these pieces:

As mentioned, I cut the thumb free and bend back the palm: 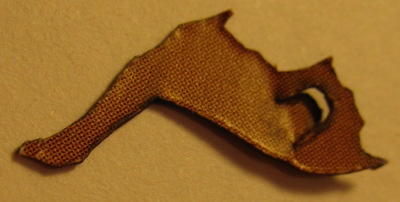 In order to get the goblin to fit tightly into the corner between the thumb and palm without warping the shape of the hand, I shave off part of its back on that side. After gluing him into place and gluing the fingertips onto his side, the completed arm looks like this:

The most difficult part of Brion is his beard. The problem is that the way his numerous locks of hair overlap and intertwine does not lend itself to full detailing. This is because multiple locks are connected at one point but overlap at other points. In situations like this, as an alterer, youâll need to decide whether to underdetail or overdetail. I usually fall somewhere in the middle, underdetailing some spots and overdetailing other spots.

In addition to those five small pieces, I cut Brionâs head piece, which looks like this: 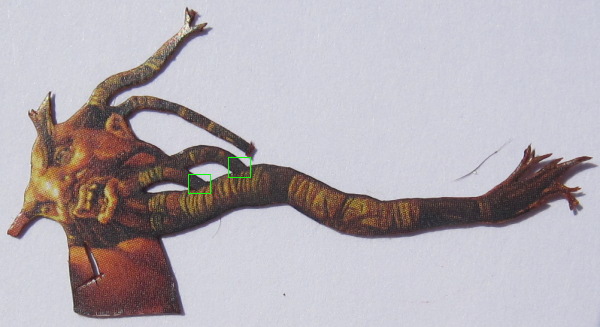 I cut the connection points outlined by green so that I can raise the main lock a bit and simulate tucking the smaller locks under it. Since the lock behind the giantâs ear will be visible in this piece, I remove it from the primary Brion layer, as you can see in this picture of a partially constructed Brion: 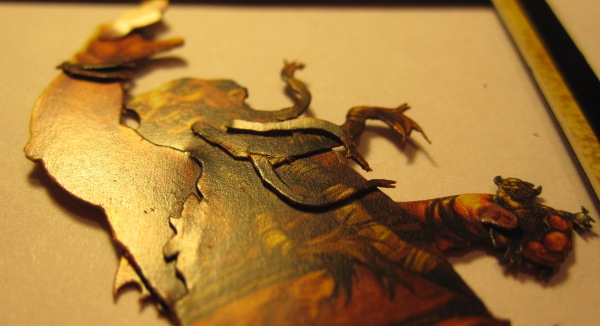 As you can see, both arms are attached, and a couple of locks are in place. All thatâs left to do is attach the head and the rest of the locks, and then construct the rest of the card! 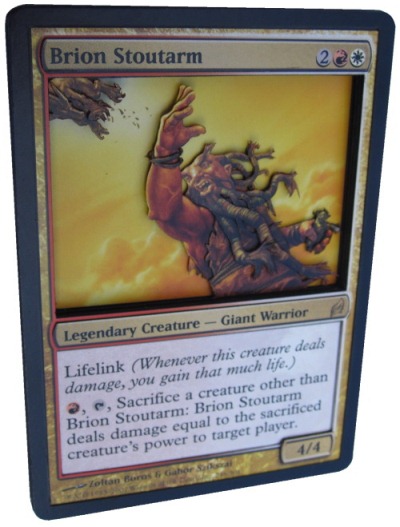 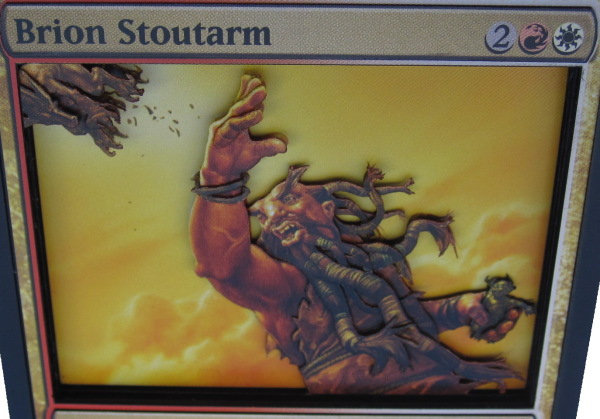 In addition to having little to layer other than the main characters, Jenara and Brion share another challenging aspect: small floating objects. On Jenara, itâs her sigils; on Brion, itâs the bits of debris trailing behind the boggart that heâs chucking through the air. For examples of this type of challenge on other cards, consider the floating orbs around Sharuum the Hegemon or the bits of flame flying away from Ishi-Ishi, Akki Crackshot.

For Jenara, I raised the sigils as much as I could, and in the finished card, it looks natural to have some of them floating slightly behind her. 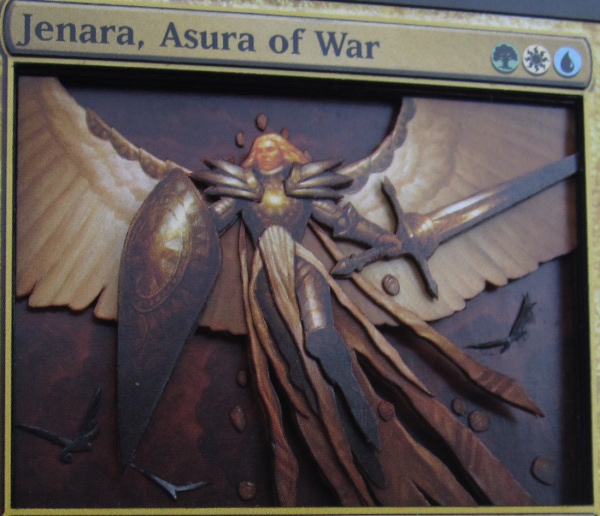 On Brion, you may have noticed that I didnât actually do anything with the debris. In his case, I trusted the 3D elements of the card to draw the attention of the viewer so that the debris goes unnoticed.

If you have thoughts on a potentially better way to handle small floating objects, please let me know in the comments. As much as my process and skill set have changed, Iâm always looking to try new things. During GenCon, I finally got to see a 3D card made by Master Ookubo, and it gave me ideas for new techniques that I want to try soonâIâll be sharing the results in a future article!