For as long as I can remember, I've had obsessive tendencies. Whenever I'm interested in something, I give it my undivided attention. It's to the extent that it often makes it difficult for me to focus on anything else. As Magic players, I'd imagine a fairly large amount of you can relate. And it's for this reason that I was hesitant to check out the Dominaria spoilers after hearing about the leak.

Building Standard decks after the release of a new set is one of my favorite things to do in this game. During spoiler season, every second of the day that I allocate to Magic is focused on working with the new set; it's essentially like the other formats don't exist. I obsess over every minute detail of every list I put together, and I don't stop until I'm satisfied. This is probably the reason I've had the amount of success I've had in new formats. I'm able to dedicate this much time to one format because there generally aren't too many tournaments between the start of spoiler season and the release of the set. But because Dominaria leaked significantly earlier than intended, I still have a lot of tournaments to focus on before I get to play with the new set. Being self-aware and knowing that taking a look at the new set would be severely detrimental to my results in the next few tournaments I play, I initially intended to just completely ignore the existence of the spoiled cards. But also being self-aware, I knew it probably wasn't going to be long before I took a look at it. I held out a bit longer than I expected, but I did pull up the spoiler page this past Sunday.

Despite having to prepare for a Standard tournament and a Modern tournament this weekend, and still needing a non-trivial amount of QPs to even play in both if needed, I haven't played a match or had a Magic related thought that wasn't about Dominaria Standard. There's still more to come, but I'm quite pleased with how the set looks at this point. It seems like a nice healthy mix of innovation and callbacks, so it's been pretty interesting to work with. Despite entering such a large format, I fully expect Dominaria to have a significant impact on Standard. Some of these cards just seem way too powerful to not see play. 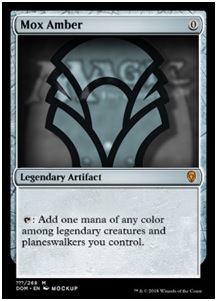 Indicative of my enthusiasm for working with new cards and my impatience, we're starting off with my favorite card from the set. I genuinely don't know how good this card is, but there's never been a Mox short of completely busted. Mox Amber is almost certainly the weakest of the bunch, so the comparison may not be appropriate, but I'd have to imagine the ceiling for it is still absurdly high. So while there is a chance it's completely unplayable, it also has the potential to be format warping. In addition to being a powerful card to build around, it's also been incredibly fun. Finding the right balance between enablers and payoffs has been surprisingly challenging, and it really forces you to get creative. Getting all of the numbers right is going to take a ton of time and effort, but I have some rough drafts that seem promising.

A throwback to week one Kaladesh Standard, the first deck I built around Mox Amber was

Vehicles. Again, this list is far from perfect, but I actually really like what's going on here. An easy mistake to make would be to just throw Mox Amber in a deck with some legendary stuff and call it a day, but I really wanted to build a deck that had a reason to actually be playing it, and I think I did a pretty good job of it here. Mox Amber serves several purposes in this deck, and I've tried to incorporate a few things to mitigate the drawbacks.

The primary purpose of Mox Amber in this deck is to provide a huge tempo advantage. Being an aggressively slanted deck,

Vehicles has the ability to capitalize off of the mana advantage Mox Amber provides early on in the game. Tempo oriented games in Standard often come down to who can start double spelling first, so the player with an active Mox out would be a sizeable favorite in these situations. This is actually the reason why I'm maxed out on Shocks despite there being so few slots for removal in this deck because of all of the requirements for Mox enablers, Depala hits, Vehicles for Sram, and artifacts for Toolcraft. Being able to play one of your Red legendary creatures on turn two or three and Shock in the same turn has to be absolutely backbreaking in some matchups. I can't imagine losing in the scenario in which you lead on a Toolcraft Exemplar and follow it up with Kari, Zev Skyship Raider, Mox Amber, Shock their play.

Unfortunately, we live in a world where we don't always draw perfectly, and there are going to be times where our Mox is underwhelming. I don't know the math on it (I'm waiting for the Frank Karsten article to tell me that my deck sucks and that I'm dumb), but some amount of the time our Mox Amber will be a glorified Darksteel Relic. But like I said, I worked pretty hard to ensure Mox is going to worth a card even when it isn't at its best. In the early game when you don't have legendary creature, it's still a cheap artifact for Toolcraft. And in the mid-late game where the extra mana normally wouldn't as relevant, you have Depala, Pilot Exemplar as a mana sink.

My favorite tribe in the game is receiving some massive support in Dominaria. The reprinting of Llanowar Elves has the ability to completely change how Standard plays out. For a long time now, the starting point for most decks in Standard has been on turn two. But with Llanowar Elves in the mix, decks might need to speed up or risk falling too far behind. As someone who despises tapped lands and loves cards that cost one, I'm pretty excited to see what this does to the format.

Like RW Vehicles, this deck is also aiming to leverage the power of Mox Amber. This list is definitely more of a fastball than the last one. No subtlety here, just a deck that wants extra mana and a bunch of legendary stuff for Kamahl's Druidic Vow. 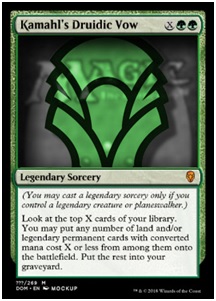 I'm not particularly high on this card, or the concept of a legendary sorcery really, but it seems powerful enough to warrant a chance at least. It's possible that you need to diversify your legendary stuff more in order to get the most out of this Genesis Wave variant, but maxing out on the legendary permanents that also serve as ramp and the cards that have the highest immediate impact seems important in order to maintain a level of consistency. I'm also not sure what the best way to go about winning is once you Vow for a large amount. I think the way the list is now it shouldn't be too hard to close the game out, but I could see running into some problems.

Another way to possibly win with Kamahl's Druidic Vow card is to combo it with Paradox Engine. You could generate a large amount of mana then try and Vow into Paradox Engine, Rhonas the Indomitable, and Tishana, Voice of Thunder.

I'm not sure if Paradox Engine is a bit too cute, but there is definitely a real upside to being able to win the same turn you Vow. And looking at it now, Blue might just be better than White on the splash anyway, even if Engine ends up being a bust. Ajani is certainly great, but being able to find your Blue engine cards off Growing Rites of Itlimoc is pretty nice. The Immortal Sun also becomes an option without any planeswalkers. In addition to that, Sanctum is a huge upgrade to Scattered Groves in your Llanowar Elves deck, and some counterspells out of the board could really help your matchup against control.

The last deck I worked on for a bit doesn't contain any copies of Mox Amber unfortunately, but there are still some sweet new cards.

spells matter theme has been present throughout a few Standard legal blocks at this point, but it's never quite had what it takes to be a real player in Standard. We're seeing it again in Dominaria this time stapled to Wizard tribal. Similar to Zombies after Amonkhet, I think we've reached the point where there's just too much support for this to not be a deck. Finding the right configuration may take some time because there's such an absurd amount of options and directions for the archetype, but I feel strongly that it will be successful in some form. In my first crack at it here, I kept it simple, and it closely resembles lists that have been played to some moderate success here and there for a bit now. But just because the list still looks similar to its predecessor, the new cards do provide a serious upgrade. Recurring damage sources are always the most important aspect of any sort of Burn deck, and Ghitu Lavarunner and Adeliz the Cinder Wind are both exceptional. With eight 1-drops, you can consistently get in damage in the early game. And with more flyers and premier burn spells, your reach plan becomes significantly more potent as well. I'm excited to see what direction this deck takes, and it's definitely something to keep in mind when actual spoiler season starts up.

It feels weird to have all of these cards thrown at me at once. I've barely scratched the surface at this point. I still have countless ideas I want to work on and discuss, but it will unfortunately have to wait until next time. I have at least a dozen more lists jotted down at the moment, and it's only been two days; I can't imagine how many I'll have in two weeks. Hopefully I've found something great by then, and ideally not at the cost of my success in any of my upcoming events.