In this experiment, we cross the threshold to hell, bent on madness, arrogance, and avarice.

Magic Origins is coming! And previews have already begun for the likes of evergreen mechanic updates and sample deck reveals. Among the previewed cards is Avaricious Dragon. 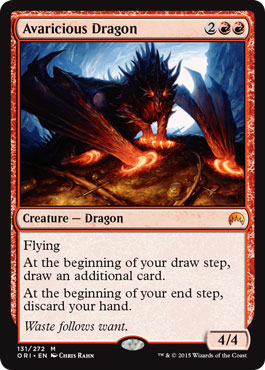 Iâm sure better players than I will find more powerful things to do with thisâand in smaller formats. But nonetheless, today, weâre going over a casual deck built around this Dragon and some mechanics of old that happen to synergize with dumping our entire hand.

The first card that came to mind was Pyromancer's Swath. It has the same drawback but offers a different upside. The Swath doesnât enhance the damage of the Dragon, but other than that, these two cards work quite well together since we arenât penalized for having the same drawback twice.

From here, though, the deck is mostly straightforward: Play a lot of burn spells and maybe some of the hard-to-come-across card-advantage spells in red. Sarkhan, the Dragonspeakerâs ultimate generates the same drawback again, so that could work well in this deck if it werenât for the fact that we canât rely on achieving Planeswalker ultimates. This oneâs loyalty cost isnât too relatively high, though, so maybe itâs worth a shot.

However, Pyromancer's Swath isnât the direction I decided to go withâI just am not really into long lists of burn spells, as they tend not to be particularly interesting.

The big risk of Avaricious Dragon is succumbing to its drawback but not benefiting from its advantage. Notably, if we cast it on turn four or on turn three (with mana acceleration) and discard five or so cards, weâre really counting on the Dragon to do a good bit of attacking and card-drawing. But if our opponent kills the Dragon before our upkeep, weâll just have become One with Nothing for no particular advantage.

We can play around this, though, by playing out our handâperhaps a hand full of burn spells and cheap creaturesâand only then casting the Dragon. In this case, we may only discard zero or one cards and then start netting advantage immediately if the Dragon isnât answered. That seems to be the way to go.

But there are other ways to gain the advantage before the drawback. If we cast Avaricious Dragon at the end of our opponentâs turn, the upkeep trigger will occur before the end-step trigger, and weâll have a whole turnâs worth of mana and an extra card. And on top of that, even if our opponent has a removal spell for the Dragon, he or she will be incentivized to let it hit for 4 so that weâll have to discard leftover cards. (Although in that case, our opponent probably should have used the removal spell during his or her own end step after we resolved the Dragon.)

Of course, Avaricious Dragon doesnât have flash. So how are we planning to cast it at instant speed? There are multiple ways to do this, such as Vernal Equinox, Prophet of Kruphix, and Yeva, Nature's Herald. All these are pretty expensive thoughâat least as expensive as the Dragonâwhich doesnât really help our curve.

The first card I thought of for this purpose was Insist. Rereading Insist, though, I realized I confused it heavily with Savage Summoning. A hybrid of these two cards would be amazing here. Iâm not so much worried about the +1/+1 or uncounterability as I am with the flash and the cantrip, but unfortunately, thatâs not the way Wizards of the Coast distributed these upsides across the two cards.

Nonetheless, since weâre going to be dumping all our cards anyway, maybe the lack of a cantrip on Savage Summoning isnât too terrible. And, hey, a 5/5 Dragon is a reasonable upgrade over a 4/4âif we do no damage other than through Dragon combat, weâll win in four turns rather than the five turns it would take without Savage Summoning and its +1/+1 counter.

Several mechanics from Magicâs history play pretty well with discarding our hand. None of them fully compensates for card disadvantage, so we still have to play carefully, but letâs take a look at some of our options.

Madness is perhaps the most obvious of these. We have to discard cards to the Dragon, but with madness, we can still cast the cardsâand for cheaper. Madness can be a great form of virtual card advantage because we can pay the cost of discarding a card while still gaining of the benefit of casting a card.

Basking Rootwalla â This can be a 3/3 1-drop or a 0-drop with madness. We have to pay for the Rootwalla activation whenever we want to use it, but if we pitch our hand, we may sometimes be grateful for having a way to usefully spend our mana. Also, Basking Rootwalla also offers us the dream: Can you imagine having to discard four cards to Avaricious Dragon and having them all be Basking Rootwallas?

instead. That doesnât seem like too bad of a disadvantage considering the number of ways weâll have of discarding.

Violent Eruption â The closest analog I can think of for this one is Arc Lightning. But the Eruption deals 1 more damage and is only slightly more mana intensive with madness. Without madness, it costs 4, but itâs still an instant, which is another upgrade over Arc Lightning.

Arrogant Wurm â I wanted to find more room for this and its color-shifted Planar Chaos brother Reckless Wurm, but they donât play well into our curve without madness, and they may be harder to play with madness, as compared to the

of Basking Rootwalla and Fiery Temper, respectively. Violent Eruption has the same casting issues, but splitting 4 damage can be super-powerful, while just another 4/4 may not add a ton compared to our other threats.

Cards with threshold can work well with discarding our hand since all those cards end up in our graveyard. Now, discarding a bunch of cards doesnât turn on threshold immediately. Consider playing a turn-one One with Nothing. On the play, we still only have six cards in our graveyard, as one of our opening cards was a land that we played to cast the spell. On the draw, weâll have threshold from turn one, but now weâre out of lands and spells to actually use the threshold.

As you can see, no matter how âefficientlyâ we can discard our cards, having and leveraging threshold can still take several turns. However, Avaricious Dragon also draws us extra cards, speeding things up, and a couple other cards in our deck will help this as well.

Nimble Mongoose â As a 1-drop, this can come out before the Dragon so we wonât have to discard the Mongoose. It has shroud, making it hard for our opponent to deal with, and when we reach threshold, itâll fully come into its own as a 3/3 beater.

Werebear â This costs 1 more mana than Nimble Mongoose and doesnât have shroud, but it is a point of power and toughness larger with threshold, and its Llanowar Elvesâstyle ability will let us resolve Avaricious Dragon a turn earlier. (Letâs hope the rest of our hand is Basking Rootwallas!)

This one is perhaps as obvious as madness. Clearly, cards that enhance when you have no cards in hand will be stronger when we discard our whole hand. That said, there havenât been a ton of powerful madness cards. Rakdos Pit Dragon is strong, as is Gathan Raiders. Demonfire is a great finisher. But I ended up just playing a singleton hellbent card.

Keldon Megaliths â Lands with abilities can be great for a deck that expects to hold few to no cards in hand. The Megaliths give us a bit of inevitability, and they give us an outlet for mana when we have nothing else to do.

Finally, we have suspend. This one isnât like the others. It doesnât benefit us for discarding cards. What it does, however, is avoid the drawback of being discarded. Because suspend lets us pay time instead of mana for a spell, we can take it out of our hand early in the game, discard our hand as many times as we like in between, and then finally actually resolve the spell.

Wheel of Fate â And in this case, that spell we finally resolve will be a card that actually does reward us for having discarded our handâor at least itâs going to make us discard our hand anyway, so we better have made use of it before that point. This can benefit our opponent as well, and we may very well be discarding our hand anyway at the end of the turn, but the idea is to make use of as many of the cards as we can and refuel the game if weâve hit a lull.

Here are the remaining cards I used to round out the deck.

Faithless Looting â I usually donât like this card, as it provides card disadvantage. We draw two cards and then discard two cards, which seems like breaking even until you consider that we expended the Faithless Looting. It has flashback, sure, but flashing it back just breaks us even. The filtering it provides has a lot of work to do to make up for that disadvantage. However, with this deck, weâre expecting to suffer a bit of disadvantage. In addition, it will help with threshold, and with madness around, the Looting can actually generate virtual mana and cards by letting us cast our spells cheaper and while discarding them.

Sarkhan, the Dragonspeaker â I mentioned him earlier because of the similarity his ultimate emblem has to Avaricious Dragon. Its ultimate canât be relied on, but it is another 4/4 Dragon body, this time with haste, and as a Planeswalker, of course itâs going to be powerful. It may be a bit extraneous, but I just like having one thrown in.

Kessig Wolf Run and Hellion Crucible â These are a couple other lands that, like Keldon Megaliths, are around for when weâve spent our hand and need more stuff to do.

Forgotten Cave and Tranquil Thicket â Finally, these couple land cards can provide mana when needed, but they can also cycle. That doesnât play into direct synergy with Avaricious Dragon necessarily, but it does help threshold, help us find key pieces when we need them, and keep us on the gas instead of flooded.

If you needed more madness, if you want to try Avaricious Dragon in something casual, or if you just needed a reason to force yourself into some card disadvantage, give this deck a try.