In this experiment, we reconnoiter the groves and realize the myths of Nyx.

Opalescence is a pretty cool card. Starfield of Nyx basically blows it out of the sky. 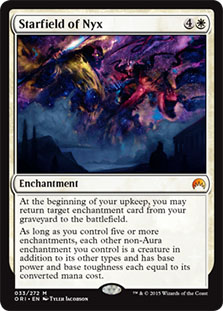 It costs 1 more mana than its predecessor, but it adds an extremely powerful Debtors' Knell for enchantments for that cost. Iâve been looking for an efficient way to cheat my Decree of Silences onto the battlefield for years.

Now, there is a restriction to our Opalescence clause: We have to have four other enchantments, and thatâs kind of a lot. We wonât just be swinging for 8 with our big enchantment with nothing else around. Fortunately, there are plenty of enchantments in Magic. And since weâre going to be animating them, letâs see if we canât curve out. Casting a 1-drop enchantment on turn one, all the way through a 4-drop enchantment on turn four and Starfield of Nyx on turn five, will let us attack with our first four plays for 10 (or more) damage immediately.

Weâll save Decree of Silence for a future article.

Gerrard's Battle Cry â Imagining enchantments as creatures is an interesting experiment. This cute little 1/1 Battle Cry can pump our whole teamâonce we have oneâwhich will be especially helpful since, otherwise, our creatures will only be as big as the mana we spent to cast them.

Reconnaissance â Speaking of small creatures, this one will let us swing with everyone, let our opponent block, and then decide what we actually want in combat.

Myth Realized â This is our best option as a 1-drop, so I included all four. Every enchantment we cast (all our nonland cards) will pump this upâand we can even pump it manually for

to bring it up to full power when needed. It makes for a great âthreat-of-activationâ combat trick: We can attack with it as a 1/1 and wait to see how our opponent blocks before activating it. And if our opponent blocks it with a deathtouch creature, we can just use Reconnaissance to pull it from combat altogether!

Mirri's Guile, Testament of Faith, and plenty more offer reasonable 1-drop options, but I had to make a lot of cuts.

Afiya Grove â I feel that I bring up some new pet card of mine almost every week, and this is another one of them. Even overlooking its downsides, the rate of three +1/+1 counters for 2 mana isnât too much better than the three counters for 3 mana on a card like Cached Defenses. Afiya Grove presents an interesting opportunity in a deck like this though: When animated, itâs a 5/5 for 2. The risk is that if we have no creatures but our opponent does, weâll be forced to move a +1/+1 counter onto our opponentâs creature during our upkeep, so actually casting this Grove on turn two could be dangerous. But if we play it while itâs already a creature, we can have it put a counter on itself during our upkeeps, and the counters never have to move.

Sterling Grove â This is an enchantment staple thatâs hard to turn down, especially considering our reliance on finding Starfield of Nyx. It protects our threats, finds our combo piece, and is even recurrable by the Starfield.

At 3 mana, things start getting crazy.

Banishing Light â Oblivion Ring works, too. While animated, this is a 3-mana 3/3 thatâs also removal for any type of permanent. Thatâs insane value. When not animated, it helps hold off our opponent until we can bring things online.

Enchantress's Presence â And hereâs a Nessian Courser that also draws us a card whenever we resolve any spell in our deck. Why are 3/3s for 3 so much better than 2/2s for 2? Well, I guess Afiya Grove is a 5/5 for 2â.â.â.â

Lashknife Barrier â Cutting these from four copies to two was my last culling to bring the deck down to size. It virtually grants our enchantment-creature army absorb 1 (see Lymph Sliver), which is slightly better than +0/+1. But the real excitement factor is the Elvish Visionary ability of replacing itselfâbut on a 3-mana 3/3 instead of a 2-mana 1/1. One of my saddest moments building this deck was when I realized I couldnât play Ground Seal as a 2/2 cantrip because of its negative interaction with Starfield of Nyx.

Citadel Siege â Cards like this can provide so much potential threat (adding multiple +1/+1 counters per turn) because they arenât actually threats on their own. With Starfield of Nyx, itâs a 4/4 that also pumps things up each turn, which takes it from being really powerful to really amazing. It also gives us the option of staving off attackers when weâre not in a position to go aggressive. Incidentally, those staved-off attackers are also staved-off blockers, so even if the dragons mode doesnât give us as much raw power as the khans mode, it can still help us play aggressively.

Eidolon of Blossoms â This is the only card in our deck with the creature type printed on it. But with Starfield of Nyx, it grows from 2/2 to 4/4, and just like Enchantress's Presence, it lets us draw a card whenever we resolve a spellâand the Eidolon even counts itself.

Light from Within â Hereâs the gem I wasnât expecting when I built this deck. Afiya Grove is cute, but the Light is a powerhouse. With a few good card choices, itâs a souped-up Glorious Anthem (which is another reasonable inclusion for a deck like this). An animated Light from Within is already a 6/6, and it makes Gerrard's Battle Cry and Reconnaissance 2/2s, and it gives Myth Realized +1/+1 on top of whatever it activates for. Sterling Grove becomes 3/3, Banishing Light and Lashknife Barrier jump to 4/4, and Citadel Siege becomes 6/6 as wellâbefore two +1/+1 counters even come down.

Starfield of Nyx â We have all four of these, and they usually wonât be creatures. Itâs not legendary, so we can follow up with a second Starfield to get an extra 5 damage in with the first one if we really want to, but itâs probably going to be better to hold back the second copy for after the removal of the first.

A fun curve-out sequence with this deck might be Myth Realized, Afiya Grove, Banishing Light, Light from Within, Starfield of Nyx. That lets us attack for 17 on turn five while still controlling a ton of beef, so if you were looking for a different take on an enchantment deck, if Light from Within is as impressive to you as it suddenly is to me, or if you just want to Debtors' Knell some Sterling Groves, give this deck a try. 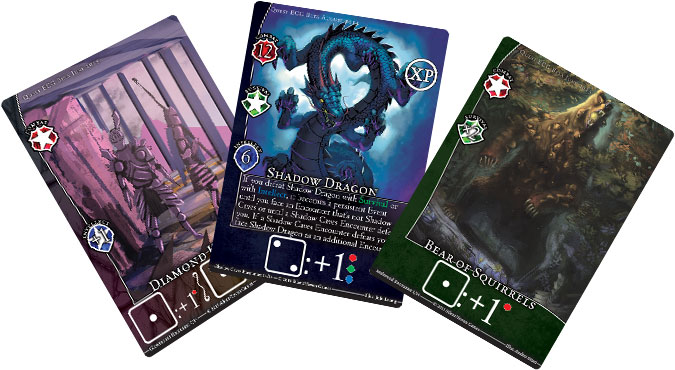