In this experiment, we indulge myriad biovisions with a sword and sundial.

Commander (2015 Edition) previews have begun, and one card in particular jumped out at me. 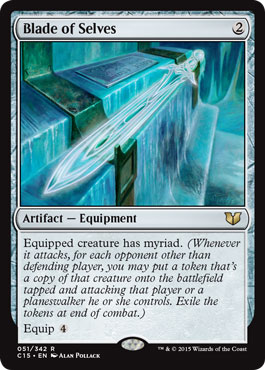 This Equipment lets us make a bunch of copies of our creatures, which seems pretty exciting. Itâs a bit reminiscent of Nacatl War-Pride, which was crazy on its own and even crazier with a little bit of combos thrown in. Myriad should be interesting on its own, but the Blade lets us make any creature myriad.

The first card that came to mind for me was Cylian Sunsinger. I asked myself what creature wanted to have more of itself around, and the Sunsinger came to mind. Of course, Timberpack Wolf is in a similar space.

Then, the Sunsinger idea led me toward Elvesâor tribal in general. Gaining additional copies of a creature that already pumps itself, and possibly others, will compound that effect. But this leads to the question of how much weâll actually be benefitting from our extra creatures. And that comes down, essentially, to how many opponents we have.

In a duel, myriad has literally no effect. The more opponents we have, the more powerful it becomes. Imagine a Blade of Selves on Faerie Miscreant. If we attack an opponent in a three-player game, weâll draw a card. But in a ten-player game, weâll draw eight cards. When Iâm playing a multiplayer game, I generally assume Iâm playing a four-player game and therefore have three opponents. So when one equipped creatures attacks one of those opponents, there are two other opponents, so in general, I assume Blade of Selves will be giving me about two creature copies.

There are a few ways to benefit from Blade of Selves. First, we can just make copies of huge beaters and deal damage to all our opponents at once. This is perhaps the most obvious use. This category could also include triggering when-this-deals-combat-damage-to-an-opponent abilities. Basically, this category is for copying creatures that greatly benefit us for hitting opponents, whether thatâs for damage or for value.

The second category is for combat-related abilities. This is similar to the previous category, but while that one might have included something like Putrefax, this one is for something like Elvish Archdruid, the aforementioned Cylian Sunsinger, or even Borderland Behemoth. The previous category is for creatures that hit hard on their own, while this is for creatures that will hit harderâor help your other attacking creatures hit harderâthe more of them you have around.

The third category is just pure valueâfor these creatures, the fact that theyâre attacking is probably more downside than upside. A good example here would be Shriekmaw, Mulldrifter, Eternal Witness, and the like. Weâd rather not attack with these creatures because we donât want to risk losing them in combat and no longer being able to reuse the value-generation of the Blade.

Todayâs deck involves a bit of the first category and a bit of that third category, but itâs actually built around the fourth category.

Astute among you will notice that Biovisionary requires we have four copies on the battlefield at the end of the turn. And the myriad keyword exiles the token copies at the end of combat. Enter Sundial of the Infinite to end our turn with that trigger on the stack and let us keep the Biovisionaries around indefinitely. The Human Wizard triggers at the beginning of the end step, so we can win on the opponentâs turn who is immediately after us.

There are several ways this wonât work. First, we have to be playing a multiplayer game or the Blade wonât do anything at all. Ideally, weâll have four opponents (a five-player game), so attacking one will give us three token copies, letting us activate the Sundial and then win at the end of the subsequent turn. Finally, our Biovisionaries have to survive combat. Our real copy is the most important, of course, but if weâre not keeping at least one token copy around, weâre not making any progress toward winning the game.

Here are a few cards that will help let us attack with Biovisionaryâor another equipped creatureâand not lose it.

Wingcrafter â Pairing Biovisionary with Wingcrafter means we can fly over opposing forces. The tokens may still be blocked, but the important one sticks around. Itâs unlikely all of our opponents will have flyers that can take out our 2/3. If we have extra Wingcrafters, we can have them pair with the tokens as they appear in the combat phase and then become unpaired, ready for future combats.

Writ of Passage â For

during our upkeep, we can make one of our creatures unblockable, changing our selection each turn if necessary. And for

, we can make that selection permanent, though we then run the risk of losing the Aura.

Thassa, God of the Sea â Thassa can sit on the battlefield and provide an effect similar to Writ of Passage. She can also become a 5/5 when we hit devotion, which will sometimes happen during combat after generating myriad tokensâwhich is pretty awkward since, by then, it will be too late to have attacked with Thassa. But really, sheâs around for the value scry and the unblockable-granting ability.

When weâre not going for the win with Biovisionary, here are a few other creatures to put the Blade on.

Faerie Miscreant â This is like a tiny Mulldrifter, but it keeps our curve lower. Itâs already pretty low, so maybe Mulldrifter would just be better, but I like finding uses for less-used cards. Itâs nice that we can play this on turn three and easily attack with it on turn four, equipped with the Blade, for value, even leaving our turn-three spot open.

Elvish Visionary â This is like the Miscreant, but it draws us the card up front and doesnât fly. It has a better reputation, quite possibly because of its efficacy in Elf-driven decks, but it should be reasonable here.

Coiling Oracle â The epitome of G/U value, Coiling Oracle should be great as an upgraded Elvish Visionary. You donât have to win when youâre already high from all that value.

Brackwater Elemental â As long as weâre ending the turn during our end of combat, we may as well attack with this guy. We can use Sundial of the Infinite to end the turn with his sacrifice trigger on the stack, allowing us to keep him around. Keep in mind, though, that it wonât work with blocking or with unearth. We can use the Sundial during an opponentâs turn, and unearth will just come back and exile the Elemental during the next end step, even if itâs not ours.

So if you love Sundial of the Infinite, if you have more selves than you can manage, or if you just want more, give this deck a try.