In this experiment, we manifest Phyreixan power and alarm the summons of the soul.

Fate Reforged previews have begun, and three new keywords have been revealed. Manifest makes anything into a morphlike creature, from right off the top of our library, so if youâre in the market for 2/2s, and morph and Illusionary Mask havenât cut the mustard for you, give manifest a chance. 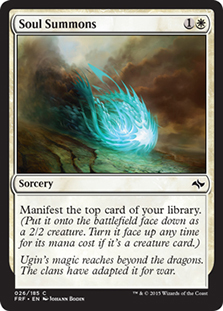 Manifest has a few weird things going for it, so letâs take a look at a few.

First, manifest isnât actually morph, and it doesnât give morph to the cards it puts face down. It only makes them walk, talk, and look like morphs. Yes, theyâre face-down cards that are 2/2 colorless creatures with no subtypes, but being a morph technically means having the morph keyword, and manifested cards donât necessarily have that text on themâthough our opponent may never know (until the card leaves the battlefield or the game ends, at which time weâll have to reveal the relevant cards to him or her).

Second, and as kind of an extension of the first, manifested creatures gain the ability to be turned face up almost as though they had morph. Basically, the manifested card doesnât have morph, but if itâs a creature, we can pay that creatureâs mana cost, kind of like a morph cost, and turn the creature face up. In this way, manifest functions almost identically to morph once the 2/2 is already on the battlefieldâexcept, of course, that morph cards are turned up for their morph costs and not their mana costs.

Third, and perhaps most odd, is the interaction manifest has with noncreature cards and, especially, with cards that can turn such noncreature âmorphsâ face up. In Standard, this shouldnât be an issue. Once a card is on manifested, itâll just be a 2/2. If itâs not a creature, no problem. We can basically treat it as a token. If it returns to our hand, we can cast or play it as normal, and if it dies, it just goes to our graveyard. But what becomes weird is when we combine manifested noncreature cards with old, morph-related cards such as Skirk Alarmist, Ixidor, Reality Sculptor, and Break Open.

According to the âMechanics of Fate Reforgedâ article at the time I write this, a face-down instant or sorcery card that would be turned face up by such an effect is instead revealed and kept face down (as a 2/2). If the card is an artifact, enchantment, land, or other permanent, it will turn face up and stop being a creature, in the same weird, but totally legitimate, way that Lumithread Field, Zoetic Cavern, and Whetwheel work. What the article doesnât address is what happens when the top card of your library, when you would manifest, is a double-faced card such as Huntmaster of the Fells (a.k.a. Ravager of the Fells). Those cards canât be turned face down (as they have no back), so it will take some kind of rules loophole to solve that. But neither face-down double-faced cards nor instant-and-sorcery manifest shenanigans is the topic of todayâs article.

When you morph a creature, any of its enters-the-battlefield abilities donât trigger. Thatâs because their abilities virtually donât exist as they enterâas the creatures are face down. The same is true when manifesting a creature.

If I manifest, say, a Phyrexian Dreadnought, I wonât have to sacrifice any number of creatures with total power 12 or greater. Of course, I wasnât able to benefit from the low, low cost of

because I had to use whatever card allowed me to manifest, including paying the mana for that spell.

Then again, since manifest gives its creatures virtual morph costs of their mana costs, I guess playing Soul Summons on turn two and then unmanifesting for

on turn three to attack for 12 trample isnât too bad.

Maybe we could build our deck around that.

Leveler is a cute option, never really finding much a home since its release in Mirrodin. Here, we can have it enter the battlefield for cheap and then turn face up for only

. Itâs no Phyrexian Dreadnought, but we can only run four of those. Etched Monstrosity, though, seems to be a better option than Levelerâpoor guy, that Leveler.

We have the same exchange rate on power to mana (5 mana for a 10/10), as the Monstrosityâs failure to enter the battlefield properly means it wonât ever have those 5 -1/-1 counters. And if we decide just to cast a 5/5 for 5 without any synergies, we wonât have to worry about exiling our library.

Here in the morph category, letâs talk about Artisan of Kozilek. I specifically looked for creatures with 10 or more power, as a way to end our opponent in just two swings, and Artisan of Kozilek seemed great. Then again, once we manifest it, weâll still have to pay

to gain access to that 10-power body and annihilator trigger.

Thatâs where Skirk Alarmist comes in. Cheating on morph costs since the early days, Skirk Alarmist works as a kind of Sneak Attack for manifest in our deck, and if we Soul Summons Artisan of Kozilek on turn two and then turn it over with Skirk Alarmist on turn three, weâll leave our opponent with few to zero permanents.

And as a totally honest, Iâm-not-tricking-you-this-time morph option, we have Ashcloud Phoenix. Its interaction with Skirk Alarmist is quite intriguing, worthy of a listing on some list of subtle combos somewhere. The Alarmist will un-face-down a creature for us, but that creature will die at the end of turn; if that creature was Khans of Tarkirâs favorite Phoenix, itâll just come back, face down, due to its own trigger. From there, just repeat. The Phoenix will keep hitting for 4, and its other trigger will hit all players for 2 each time, making for quite a quick clock for players without 4-power flyers on the battlefield.

You may have been asking, âHow were you planning to be so lucky as to manifest the correct creatures? Donât we just lose when we use our manifest spells and end up with face-down lands?â

First of all, I write a column about casual combos every week. Iâm totally fine with relying on a little luck! But Iâll agree this deck probably needs some more consistency to be fun.

Of course, blue offers some powerful options for such things. Brainstorm is among Magicâs most powerful cards, and it does exactly what we want to do here. We can cast a Brainstorm on turn one and have nine or ten cards to work with when deciding what cards to put where. Stack it right, and we should have something to manifest during one of our early turns.

Dream Cache is a much worse version of the same thing, costing three times as much mana and being a sorcery. We need some redundancy, though, and Dream Cache earns some portion of its mana cost through its ability to put the cards on the bottom of our library. The circumstances in which weâd cast this 3-mana spell and then put two cards on the bottom of our library, however, seem quite dire.

Finally, the scry lands can do some work. Theyâre not as powerful for moving cards from our hand to the top of our library, for example, but they do let us peek to see if now is the right time to cast that manifest spell. They do enter the battlefield tapped, though, so that can put quite a strain on our expediency. Still, Iâll start the list with all twelve on-color Temples (Temple of Enlightenment, Temple of Epiphany, and Temple of Triumph) and one of each of the other two

-producing Temples (Temple of Malice and Temple of Abandon) for Etched Monstrosityâs sake.

Okay, so Soul Summons isnât going to be enough. I havenât mentioned it yet, but we also have Rageform. 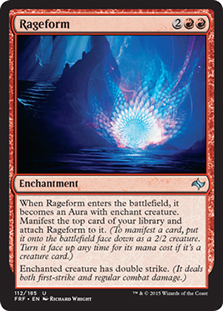 This Aura gives the manifested creature double strike, though

is quite a bit more expensive than

. I mentioned earlier that I was looking specifically for 10-power creatures as ways to end an opponent in two swings, but I was actually distilling my options to that category for the purposes of ending my opponent in one swing with Rageformâs granted double strike.

A Rageformed Phyrexian Dreadnought can kill on turn five, perhaps even through a blocker.

Finally, Fate Reforged previews have just begun. I recklessly assume there will be at least one more cheap manifest card in one of our three colors, and if youâre willing to stretch a bit more, weâve already seen an instant that manifests two creatures for

If you needed another use for Phyrexian Dreadnought, if you like the interaction of Skirk Alarmist and Ashcloud Phoenix, or if morph just wasnât confusing enough for you, give this deck a try.