Sharing the game of Magic is generally a very positive thing; you make new friends, you support your local game store, and of course, you create memories. Iâve been able to share a lot of great memories since I began playingâranging from the first coffee table game to my first Pro Tour Qualifier and finally into the present day. Iâve had the bust-a-gut laughing six-man road trips, crazy, fifteen-man multiplayer chaos games, and a ton of others. Of course, there were a few that werenât so magical. Upsetting my wife for playing way late when I said I would be home earlier and the scary six-man car rides through snowstorms would be on that list. Even with those small bumps, Magic has been great fun for a long time.

Now that Iâm coming into my twentieth year playing, Iâve had the good fortune to be able to share this game with my boys. Chase, my oldest, entered his first Draft back during Magic 2010, and Jarod, my twelve-year-old, cut his teeth on the Innistrad prerelease. Iâve been playing before either of them was born, so theyâve always had Magic in their lives. The majority of the time, Magic: The Gathering was just âthat card game that Dad playsâ and made a mess of on the living room floor. Every so often, theyâd ask questions and show a little interest, but theyâd then go back to whatever else they were doing. Iâve always been willing to share it with them, but Iâve never forced itâ.â.â.âit just doesnât work. Still, at about ten years old, they were asking more often. The big push for each of them began when they started watching Yu-Gi-Oh! on Saturday mornings. They would occasionally ask if we could grab a few packs during an occasional grocery run. Finally, once they got a hang of that, they started asking more about what I was playing and wanted to join in. 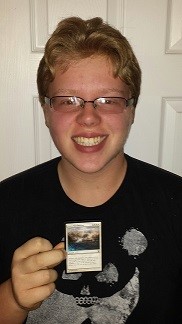 Fated Retribution â Chaseâs most recent favorite card. He came back from behind (5 to 26) to win his match at the Born of the Gods prerelease.

Now I was able to share one of my most enjoyable hobbies with two of the most important people in my life. Even though itâs not really something youâd shed a tear for, it was still a nice feeling to be able to include them in this fun part of my lifeânot as a child to a parent or adult to kid, but as peers.

To be honest, they didnât jump right in. They started pretty slowly, playing every now and then with a couple of my decks at home or a Mini-Masters game when Iâd bring home some of my Draft winnings. Not only did this help them with the general rules of the game, but it helped me to get a feel for their personal play styles. Coming from their Yu-Gi-Oh! backgrounds, they initially wanted to play decks with big creatures. âBut, Dadâ.â.â.âisnât an 8/8 fiery Dragon just better than a 2/1 Human Wizard?â Jarod still gives an awe-and-wonder look whenever I show him the left and right sides of B.F.M. (Big Furry Monster).

Chaseâs play style started from a bad decision on my part. As I mentioned earlier, his first official event was a Draft after M10 was released. Now, I really enjoy drafting. I would almost always choose to draft over other options if given the choice. So, I figured since I enjoyed drafting, I thought he might as well. I taught him the basics: what to expect, how to draft, and some of the cards to watch for. He seemed ready to go.

Big mistakeâ.â.â.âhe was overwhelmed. He drafted a W/b deck with a bunch of small creatures, a couple of huge creatures, and not very many tricks. He lost in the first round and did not enjoy it. With most of the local Drafts being single-elimination, he really didnât enjoy it. Fortunately, I was able to get him to go to the Alara Reborn prerelease, and once he realized that he could keep on playing after his first loss, he was able to still enjoy it. Even with that, he didnât try another Draft until we joined in a Modern Master Cube last fall. With that initial rough start, it gave me insight into what he liked. In the true style of Craig Wescoe, all of his decks so far have been white-based aggro decks.

Fortunately, I learned from the errors of the past and didnât immerse Jarod into drafting right away. Even though he started with Innistrad, his play style wasnât realized until Return to Ravnica. Looking forward to the prerelease, the boys took the Which Guild Are You? test. Chase ended up, typically, with the Azorius Senate, but Jarod blasted right into the Izzet League. He was as pleased as an eleven-year-old could be since he had his sights on Hypersonic Dragon since he saw it. Dragons (and dinosaurs) are close to his gamer heart, and seeing this hasty fellow solidified his style into U/R midrange decks.

Their play styles really came into play when they both wanted to start coming with me to Friday Night Magic and play in the Standard tournament. Since I normally Draft during FNM, I often donât have Standard decks ready to goâ.â.â.âat least not good ones. So before I brought them with me, we sat down and talked about what theyâd like to playâwhat colors they liked, did they want to play fast or slow, and did they want more creatures or more spells in their decks. Once I was able to get a bead on what they wanted, I checked the Internet with the plethora of decks that were out there. For context, this all started right before Gatecrash came out.

Chase initially started with a G/W Humans deck that also had a small populate theme. He enjoyed it to a point, but it had a really hard time closing the game. Chase has a Spike personality, so of course this bothered him. After Gatecrash, we were able to morph it more toward the standard Naya Blitz deck similar to this one wielded by Ben Weinburg. He had a lot more fun playing it since it still matched up to what he wanted and allowed him to get more checks into the âWâ column than before. 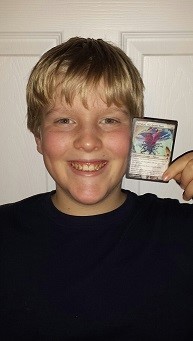 Jarodâs all-time favorite card is Emrakul, the Aeons Torn. Bigger is always better according to him, and with Emrakul, heâs not far off.

Jarod was a little more difficult. We tried our best to create a decent deck that included his favorite Dragon and other Izzet-type elements, but everything just came up lacking, and he wasnât able to compete with what was out there. He went either 1â4 or 0â5 three separate times before I was able to talk him into letting go of his speedy Dragon for the time being. So I scoured once again to find a similar midrange deck that he would at least win a couple games with and still have fun. After a week of searching and running each deck by him with little resultant enthusiasm, he raised an eyebrow at the Esper Spirits deck that Jon Finkel ran for the Dark Ascension Pro Tour. Jarod liked the general theme, but he wanted more creatures. So, we developed it into the token version that had cards such as Midnight Haunting and Favorable Winds, and he loved it. He didnât win every time, but he started winning more. Sometimes, he just didnât catch an interaction or timing correctly, but he kept learning and improving.

One of my favorite moments was during an FNM back around July. Jarod was in the third and final game of his fourth match, and he was just about to attack his opponent with six 3/3 Spirits for the win. Normally, you wouldnât think of that being very special, but in this case, his opponent was playing a B/G deck. He sideboarded in and had in play all four of his Illness in the Ranks. When that game ended, Jarod had two Drogskol Captains, three Favorable Winds, and one Intangible Virtue to allow his Spirits to triumph. I believe it was also his first FNM in which he ended up on the plus side (3â2). Chase had a tremendous night as well. He ended up with either a 4â1 or 3â2 to make it a total brother win! It was a short road trip back home, but it was one of the more enjoyable ones. As we were cruising down the stretch, each of them shared in the amazing plays and close losses that he experienced. Those road trips back home are usually good times and can be a lot of laughs. When your children accomplish what they didnât think they could and you see their exhilarationâ.â.â.âwell, itâs that and a whole lot more.

After Theros came into the picture, both boys were depressed. They didnât want to change decks especially since they were doing well with them. I reminded them that this is a part of the Standard format and weâll just have to adapt and change (at least until I get them into Modern, but thatâs another article for another time). So, shortly after the Theros prerelease, I started developing again. This time around, Jarod was easy to figure out. He went back to his love of Hypersonic Dragon. Heâs now equipped with Young Pyromancer and Purphoros, God of the Forge and was able to work out his decent midrange Izzet deck as shown below:

It has run well for him, but lately, it hasnât been winning as he would hope. Heâs recently been toying around with the Big Boros deck that Michael Kenney took to the finals at StarCityGames Open Columbus. Heâs looking to try out just a couple of cards from Born of the Gods, such as Searing Blood and Acolyte's Reward.

Chaseâs deck was the hard one. He stayed in white and wanted to try out the W/U heroic deck. He tried it at a couple of FNMs, but he couldnât really get it going. He always felt he was a step behind. Fortunately, Grand Prix Fort Worth happened, and there were a few mostly-white Orzhov Aggro decks that did pretty well. I showed him the decklist, and he was all for it. Heâs been able to play in only one FNM so far, but he said it felt better and allowed him to put that pressure on his opponent. I even took it for a 4â1 record last week (since he was playing D&D with friends), and that helped to confirm it for him. Here is the list that heâs playing currently:

Chase has more options to choose from Born of the Gods. Heâll be testing out Archetype of Courage and possibly Brimaz, King of Oreskos or Pain Seer if we can grab a couple of those. He wants to test Acolyte's Reward and Glimpse the Sun God for the sideboard as well. Of course, like any aggressive, small, creature deck, Drown in Sorrow will be a pain, so he may be onto another path here soon.

I hope you enjoyed this leg of our magical journey. Iâm trying to prepare them for Grand Prix Cincinnati in March, so with any luck, Iâll be able to share more of our magical exploits in the coming months. Along with Standard, Sealed, and a little bit of drafting, Iâve also been able to get them involved in Commander and a smattering of Modern.

May you be able to share in the joy and growth of those around you.