This month marks exactly one year that I have written articles for Gathering Magic. If you have been following along since the beginning, I just want to say, Thank you! Without any readers, I would not have such a wonderful outlet for all of the ideas fighting for dominance in my brain meat. Ant jams his finger into his ear and quells idea rebellion.

In that time, we have covered a wide range of topics, involving but not limited to the flavor of Elder Dragons, a trio of tasty snacks, powerfully written epithets, and (for some) the acquired taste of comedy. What all of these articles have in common is that each discusses a flavorful facet that added to the overall taste of the game we know and love.

Today, I want to try something a little different. Today, we will look into the absence of flavor and how that can have a taste all its own.

Books and the Art of Learning

First thingâs first: This article has a musical component. If you will, please click the following link and allow the music to wash over your ear parts as you read on.

I absolutely love to read. Before I started writing for Gathering Magic or producing Snack Time with @VorthosMike, I used to try to read one book a month. While I am a huge fan of the fantasy genre (R. A. Salvatore being one of my favorites), I also really enjoy books that are completely removed from fantasy all together. I find the interruption from my normal interests to be refreshing, and it often leads to new ideas that I can use in my writing. The book that I am currently reading is called The First Four Notes: Beethovenâs Fifth and the Human Imagination by Matthew Guerrieri. 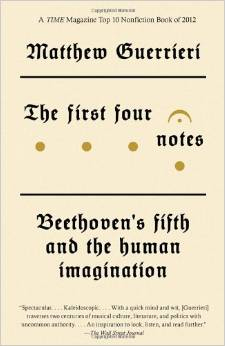 This book is a deep dive into the musical history behind what is arguably Beethovenâs most well-known symphony. I havenât finished it yet, but so far, it has been absolutely fantastic, and I highly recommend you check it outâliterally. Go support your local library, and check it out.

Anyway, there was one part of the book that I found extremely interesting, in which the author takes some time to reflect on the very first ânoteâ of the symphony: a rest.

Quite literally, the fifth opens with silence. There is a rest slipped in right before that first note. When you go see a movieâor a concert, or a playâthere is a point when the gathered crowd begins to quiet. The murmurs of conversation begin to die down and echo across the room along with any other sounds until there is a brief moment of silence beforeâ.â.â.âshow time! Thatâs the moment when the thing you went to see breaks that silence with its beginning. Often, you may have even encountered instances when this quieting of ambient noise bleeds into the beginning of whatever you have gone to see, seamlessly moving between hushed whispers and the opening credits of the latest Marvel film with no differentiation whatsoever.

In the case of the fifth symphony, that brief moment of silence before the beginning of the show would have been immediately followed by even more silence at the start of the performance, creating an air of brief discomfort right before you are blasted by the next four notes.

Reading this got me thinking about the power of silence and other examples of how the lacking of something can have a far greater impact. 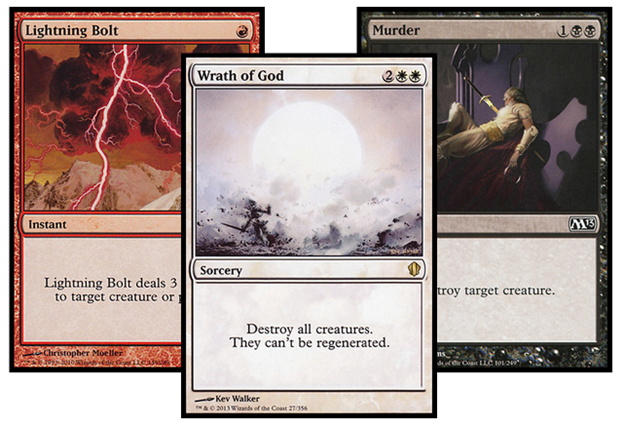 Iâm talking about instances when the lacking of flavor text, even when the card so readily provides the space for it, can actually say more than any quippy one-liner or world-building text could have.

There are well over ten thousand printed Magic cards to date, and yet, the available space for flavor text is tight. This is due to two major limitations:

One would think that cards like the ones above would be akin to heaven for a member of creative, a golden opportunity to slam as much flavor into the game as possible. Why, then, do we see some cards with nothing but a centered line of simple game text? The answer lies in the power that silence has. As a player, you see hundreds, if not thousands, of cards, many of which are crammed to the gills with text. When you come across a card lacking a sufficient wall of words and symbols, you are prone to stop and take a double-take at that card. The absence of text is going against the norm and causes you to physically stop and take notice.

The majority of people read cards top to bottom when they see them. When you read a card like Wrath of God, you start with the name, look at the incredible Kev Walker (in this case) art, move down to the text box, and see:

Cool, a sweeper, you think as your eyes start darting around the text box, desperately searching for more words to devour. Thatâs when it hits you: There is no flavor text, thereâs no other line of rulesâthereâs nothing. Desperate, you find yourself reading the line a second time.

Wow, you think. This card destroys all creatures and they cannot regenerate. No wonky drawback or rules baggage, no witty one-liner to groan at. Just a pure, powerful mechanic. If you are a flavor goober as I am, you might even think, I wonder if the absence of flavor text is meant to convey the utter shock and emotional turmoil involved in ending so many potentially innocent lives. Perhaps the writer is trying to convey that he or she is literally at a loss for wordsâ.â.â.â

The absence of flavor in this case helps to further reinforce the mechanics of the game, and that can often speak more loudly than any other line of text could have. We can quite literally see the silence on the card.

Tarkirâ.â.â.âand How Ant Brings This All Together

The plane of Tarkir offered us another example of how the absence of something can speak loudly. In order to fully understand why, we need to understand the concept of an âiconicâ creature in Magic. If you already know what an iconic is, please feel free to skip down a little. The following is a refresher for those of you who may not be as familiar with the term.

The cards in Magic are split across the five colors of what people refer to as the color pie. The pie represents each color and the mechanical and psychological spaces that are used to differentiate each color from one another. 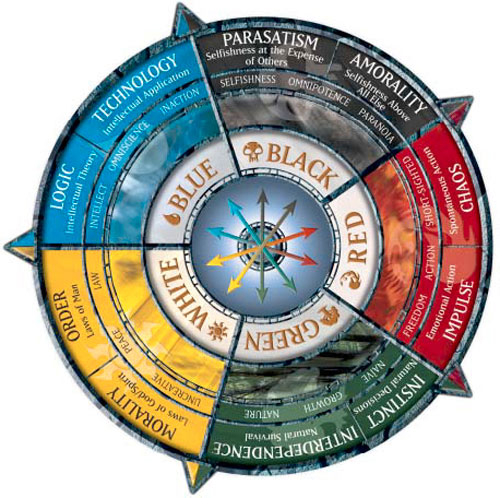 Each color has different creatures associated with that color because those creatures tend to more or less line up with what that color is about. Black, for example, has zombies more than any other color because zombies make the most sense in a color that cares about the graveyard and uses death as a tool.

Each of the five colors also has what is known as an âiconicâ creature. These creatures are meant to be the pinnacles of what their colors are all about, and they are often featured on powerful rares and mythics as a way to say, âHello, player! I am the best thing you can summon in this color.â

As of this writing, the five iconic creatures are Angels in white, Sphinxes in blue, Demons in black, Dragons in red, and Hydras in green. 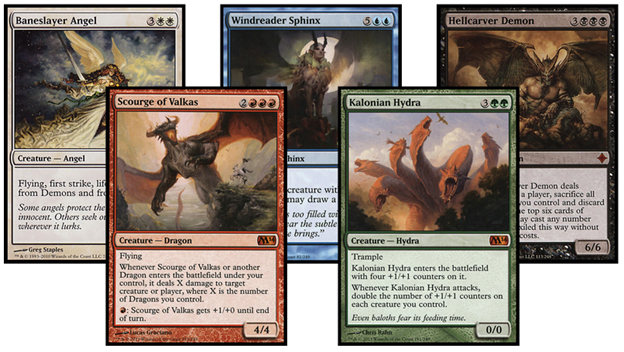 These five creatures are used set after set, being altered to fit whatever plane we were on in order to show us the âInnistrad version of a Dragonâ or the âZendikar version of a Sphinx.â

For those of you skipping, now is where you reconnect and join us for the rest of the ride.

Where Tarkir differentiates itself is in that the dragon takes the place of the iconic creature in all five colors. 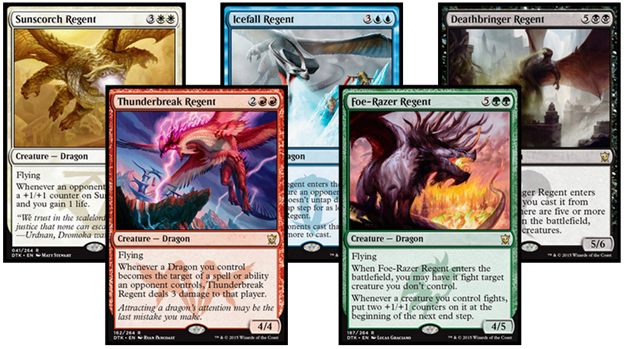 When Tarkir was first revealed to us, the following question was posed to Mark Rosewater on his blog: 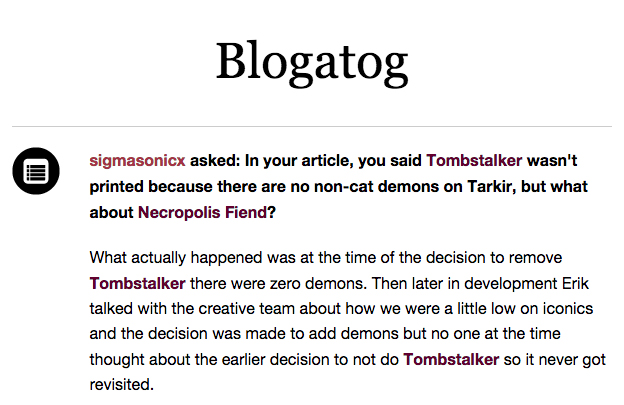 It wasnât until reading the above book that it hit me: Tarkir was originally supposed to be devoid of all iconics.

Think about it. There are no angels on Tarkir, no sphinxes on Tarkir, and no hydras on Tarkir. If Maroâs answer above is any indication, there were not supposed to be any demons either (apart from the rakshasa). Thinking about it now, I wish they would have figured out a way to stick to that original plan. Imagine, if you will, opening a box of Khans of Tarkir. You break open pack after pack and find not only that you are lacking Dragons, but that you have opened zero iconic creatures all together. Imagine drafting KTK-KTK-KTK. You would open no iconics, pass no iconics, and play with and against no iconics. Most iconic creatures fly, and the Limited environment would have instead revolved around massive ground battles of clashing armies. The complete absence of iconics in general, that silence, would have been the loudest note in the set. Follow that up with Dragons of Tarkir, and you have a world with a larger-than-normal number of iconics, all of which are Dragons. You open your box of DTK and rip Dragon after beautiful Dragon. You draft DTK-DTK-FRF, cracking Dragons and passing and being passed Dragons, and your Limited games are filled with climatic air battles between clashing Dragons. The silence of the set prior would help frame the loud, draconic notes of what would follow.

While the presence of some flying demons in Khans of Tarkir takes away from that sense of silence a little bit, I still think the overall absence of not only Dragons, but most iconics, from Tarkir being followed up by an overwhelming symphony of flying teeth, claws, and powerful breath weapons in Dragons of Tarkir is a beautiful example of how silence can be used as a part of a gameâs mechanical makeup in order to convey powerful story notes to the players experiencing the set, and for that, I applaud you, Wizards of the Coast. You guys may have just composed your finest symphony.

Until next time, may all your experiences with Magic end on positive notes.