Welcome back, fellow Vorthoses, to yet another flavorful article. Today is quite special, as I have not one, but two special Vorthos preview cards from Magic Origins to show off. Since you would all just scroll down until you see them anyway, Iâll just start off by showcasing the cards:

Soak in that awesome flavor.

But waitâ.â.â.âthereâs more. Did you honestly think I wouldnât be bringing you a super-awesome extra dose of flavor? Last week on Uncharted Realms, we were able to witness the ignition of Lilianaâs planeswalker spark in James Wyattâs incredible article Lilianaâs Origin: The Fourth Pact. If you have not taken the time to read it, I highly suggest you do so now.

As we learned in the article, Lilianaâs first planeswalk was (spoilers!) to the gothic-horror-themed world of Innistrad. We here at Gathering Magic have it on good authority from the folks over at Wizards of the Coast that, when Liliana made the return trip to Dominaria after honing her necromancy on Innistrad, a host of angels led by none other than our Archangel of Tithes recognized her dark power and attacked Liliana. Letâs just say that this âencounterâ didnât end so well for the angels. Using her necromantic powers, Liliana summoned a horde of zombies and allowed the undead to sate their unholy hunger on the angels, including the Archangel of Tithes. In true Liliana fashion, our favorite black-mana-wielding Planeswalker took the archangelâs distinctive headdress as her own, a delightful little trophy and a testament to her newfound power.

As you can clearly see on our preview card, Unholy Hunger depicts this story moment and shows the Archangel of Tithes being consumed by a hungry undead horde while Liliana walks away with her prize. I absolutely love this card pairing, as it depicts such a cool story moment that perfectly fits into the overall themes of a character's origin. Akin to Captain America first obtaining his shield, this scene with Liliana is a great example of a common trope used in different origin stories that depicts the moment when our main character obtains part of his or her trademark âsuperhero suit.â With these two cards, we are shown the origins of Lilianaâs famous headpiece, allowing us to uncover more about her origins as a character. This epic battle between angels and zombies will be just one of many moments we experience through Magic Origins, and it will be featured as part of Lilianaâs campaign in Duels Origins.

This type of âmini-storyâ being featured on cards is something that we have been seeing more and more of in recently released sets, but the idea is far from new. Way back in the day, Magic used to have an ongoing story that revolved around the Skyship Weatherlight and its crazy crew as they embarked on a large-scale, plane-hopping adventure. Within the blocks containing this epic tale, we would often see story moments spread across two or three cards that, when put together, would form into a cohesive mini narrative.

However, back in the day, this trick was a tad overused, and to make matters worse, some of the cards contained narratives that didn't line up so well with what the cards were doing mechanically, causing some players to voice their disapproval. Eventually, these mini-stories would begin to fade from the game, much to the sadness of my Vorthosian heart.

With cards like Deicide, Bitter Revelation, and Crux of Fate, we started to see a return to having important narrative moments depicted on the actual cards. The difference this time around was that not only were the moments being showcased pivotal to the storyline, but they were often high-profile cards that generated a lot of discussion.

Archangel of Tithes and Unholy Hunger exemplify the rebirth of mini-stories being depicted on cards, and following in the footsteps of earlier story moments, these two showcase a pivotal moment in an important character's origin. It also doesn't hurt that Archangel of Tithes is an awesome mythic card and will most likely be the subject of a few discussions, inevitably bringing Lilianaâs story into the spotlight. Our very own Heather has a Commander deck that could easily include this entire mini-narrative.

After an eternity of playing Vintage exclusively (or battling with the World Championship decks), my Magic buddies wanted to spice things up and join this decade. I couldnât imagine anything spicier then an opening hand with Library of Alexandria, but they insisted we build Commander decks and give it a go. Knowing absolutely nothing about Commander, I naturally went to my friend Chas Andres and told him I needed (Angels, all of them, naturally) a list with the baddest broad in town: Kaalia of the Vast.

âDonât go easy on me,â I said. âWe are Vintage players after all.â Little did I know I would fall in love with Commander and that almost two years later, I would still be slinging Kaalia almost every Saturday at our regular nerd meetupsâand loving every face-pounding second of it.

Naturally, when it was time to venture outside my group at Grand Prix Las Vegas and play Commander with the grown-ups, I brought my girl Kaalia. Grand Prix Las Vegas was the first time I ever played Commander outside my group or comfort zone. I learned some interesting things, such as that I like casting Angels more than all the other things. I mean, Iâve always known this, but I found myself extra-disappointed when I drew a Dragon or a Demon instead of an Angel.

I also learned most groups donât play with cards my group does. Maybe it is the Vintage blood flowing through our coldblooded veins, but no one at my table blinks when Armageddon hits the deck. Players at Grand Prix Las Vegas didnât like Armageddon (at all and loudly), and they really didnât like Rakdos the Defiler. I mean, honestly, I donât really like Rakdos (Angels rule; Demons drool), but whatâs a girl to do? We didnât see any cool new Angels in Theros block or in Khans of Tarkir block or in a century at least, so I am super-excited about new Angels and Antâs preview card Archangel of Tithes. She is going right into my Kaalia Fly-at-Your-Stinking-Face Commander deck, and the first Demon being replaced is sacrifice-all-your-children-to-me Rakdos.

Thatâs Not Even the Best Part

Part of what makes Magic so great is its ability to tell stories through gameplay. Let's say you are piloting a newly-created Kor Equipment brew. Using the deck, you might find yourself experiencing two completely different narratives as your creatures help you find a path to victory: 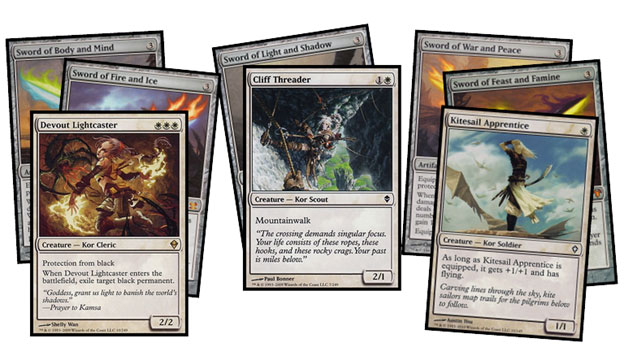 Our first example creates a story in which a kor trio infiltrates the enemy in order to secure a win. The cleric uses her innate abilities along with the magics contained within her twin swords to protect herself from any danger as she charges through the front lines. The scout pairs the magical properties of his blade with the cliff-threading skills he has honed to sneak undetected through the opponent's lands and launch a surprise attack. Finally, the soldier, dual wielding powerful blades of her own, sails over the front lines in a full-on charge against the opposition. Combined, these three generate an attack from all angles, leaving the opponent with little they can do to stop it. 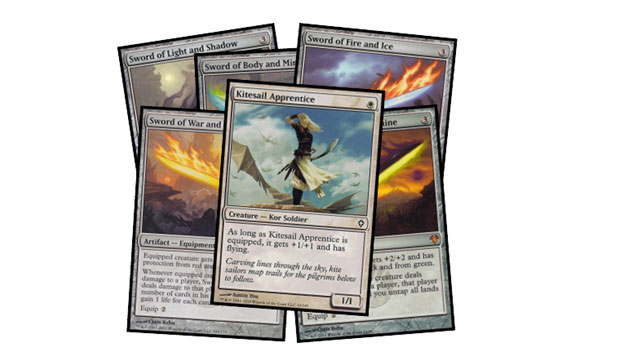 In our second example, perhaps two of your Kor took Lightning Bolts to the face. Maybe the lone soldier picked up the swords of her fallen comrades and charged into battle in a last-ditch effort to land the final blow. Both these experiences can be created using the exact same deck in back-to-back games; however, each is a vastly different narrative experience and is a large part of what keeps Magic always feeling so fresh and interesting.

What I truly love about the combination of Archangel of Tithes and Unholy Hunger is that the narrative they create when played together puts you in the shoes of Liliana as she experienced it herself.

When you use Unholy Hunger to kill a creature, you can imagine it probably felt the same way for Liliana when she used the spell to take down an archangel. When you gain 2 life off its spell mastery trigger, it isn't a huge bonus, but it will still make you feel that you are taking away something a little extra (just as Liliana did when she stole her victimâs headpiece). When you actually use Unholy Hunger on the Archangel of Tithes in game, it will recreate the narrative, allowing you to experience the story exactly as Liliana did, creating an immersive narrative experience. This is a trick R&D has used before, and I am so happy to see that they are continuing to infuse the game with the possibility to experience these cool story moments for ourselves. 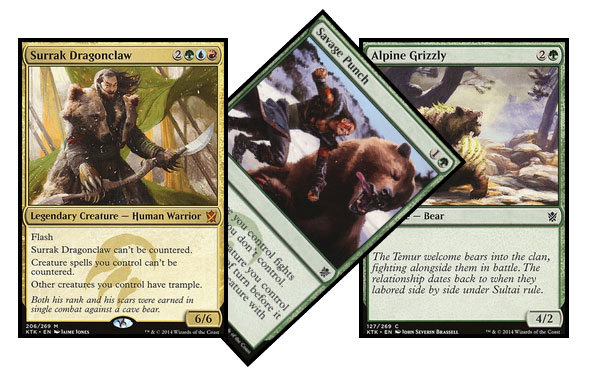 A Great Year for Vorthos

2015 has been one of the best years Vorthos has seen in a long timeâand we are only halfway through it. As pointed out by story team manager Jenna Helland in her kickoff article "Magic Origins: A New Era", Magic Origins will mark a shift in the way we are presented Magicâs storyline. Our two preview cards today comprise just one example of the amazing work Jenna and her team are capable of, and I am extremely excited to experience many more immersive moments in my games to come.

Have you ever experienced a game of Magic that seemed to be telling a really cool story through gameplay? I want to know about it! Send me a quick e-mail at anthroplasm at gmail dot com, and tell me about your experience. I hope you enjoyed this very special Vorthos preview! Until next time, may Magic be a medium for your own stories.