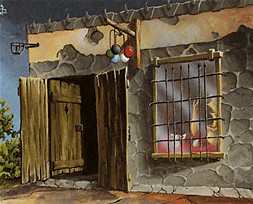 The day had started at a small pawn shop on the edge of town. It was a front for darker dealings, and the real treasures of the boutique could be found if one knew where to look. Walking through the false back of a large, antique wardrobe against the rear wall of the store led to a black market trafficking in everything from exotic beasts to stolen jewels. 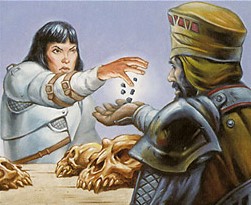 Your âtrip to the marketâ this morning was not to indulge in the items found there, but to secure work. With a freshly-signed contract resting inside the leather scroll pouch at your hip, you made your way out of the pawnshop and back toward the harbor along the eastern side of the city. Arriving at the docking quarter, you sought out one of your established contacts. A common bandit to those not in the know, this gentleman was an exceptional thief and a master of infiltration. 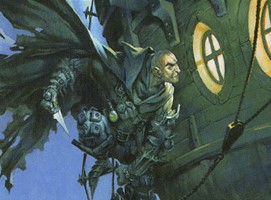 After describing your target, the bandit pointed you in the direction of a mercantile ship docked nearby. âYouâre lookinâ for Egran,â he told you. âA hired guard on the Windsong. Been staking out that ship for days now. Lookinâ to pinch me some of that Trading-Compâny gold they keep holed up in there.â You thanked the man with a nod as you tossed him a small bag of coin before making your way toward the Windsong. Creeping along the base of the ship in quiet reconnaissance, you overheard Egran talking with one of his fellow guards.

âCanât wait until I'm off for today,â Egran said. âIâm going to head over to the pub one more time before we set sail tomorrow.â

âYou can drink all you wantâthat waitress ainât gonna notice you if you never talk to her,â replied the other guard.

âOh, and you are just the ladiesâ man, are ya?â said Egran in a huff. âCome to the Baloth with me tonight, and Iâll show ya how itâs done.â

âIf I wasnât pulling a double-round tonight, I surely would just to see you drown yourself in self-pity and beer,â replied the other guard, but you had already heard enough. There was only one bar in this city with Baloth in the nameâthe Black Baloth, and you knew the owner was no man of virtue.

You made your way over to the Black Baloth. Dangling a large coin purse in front of the manâs face, you informed the barkeep that he may or may not find himself with a body in his bar by nights end. Dark dealings were commonplace on Mercadia, and the keep knew well enough to accept a bribe when he was presented with one.

âJust be sure to keep it clean; I just had my floors waxed,â the barkeep said, taking the bag of coin and immediately counting its contents. You flashed him a smile, and you dropped a second bag of gold onto the bar.

âFor your door guard,â you explained, before heading out of the bar. As you rounded the corner of a busy street, you could not help but chuckle at how easily the owner had been duped by your conjured currency. 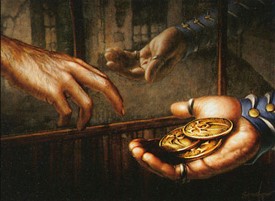 Interrupted from your thoughts, you looked up to see a beautiful barmaid standing over you, eager to scribble down your order. This must be Egranâs girlâ.â.â.âyou thought with an improvised alteration to your plan taking shape within your dark mind. You stood and placed your hand on the barmaidâs hip, pulling her close enough to whisper into her ear. With your other hand, you dropped a fist-sized ruby into the front pocket of her apron before making your way toward the bar.

You put on a fake stumble as you moved toward your target. With theatrical precision, you tripped, knocking into Egran and sending him and his drink spilling onto the ground.

âHey, whatâs the idea?â Egran said as he started to collect himself from the tavern floor. You helped him to his feet and put on an apologetic face.

âLet me get your next round,â you explained in an attempt to ease his frustration as you sat down next to him at the bar. You ordered two dark ales and began to offer another apology, but Egran cut you off when he noticed the bar maid walking in your direction.

The barkeep brought your drinks, and you offered one to Egran.

âThanks,â Egran replied without taking his eyes off the girl. âHey, wish me luck, will ya?â He turned to pick up his drink, and you raised your mug and flashed him a smile.

âGood luck!â you said to him in a friendly toast. He knocked his mug into yours with a clink before downing the drink in a few, large gulps.

You left some coin on the bar for the keep before heading for the door. Behind you, Egran could be heard making a poor attempt at flirting with the barmaid as she cleaned spilled brew off the floor at his feet. 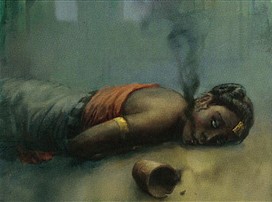 As a master of subtlety, the cards contained within will allow you to sneak, sabotage, and steal your way to the top. Is there a creature on the board causing you misery? Have one of your Assassins take it out. Want your opponentâs creature to further your schemes instead of his or hers? Have one of your Shapeshifters assume its identity. Does someone at your table have a deck filled with priceless artifacts? Steal them for yourself. From Coerced Confession to Cheatyface, every card in this deck was selectively chosen to allow you to embody what it means to be a street-savvy rogue, a silent master thief, and a deadly assassin.