Login
0 Item
Advanced Search
Sign In
Create Account
Attention: This is a sacred place. Please observe silenceâ.â.â.âand follow the signs to the gift shop for deals so unbelievable Peter is spinning in his grave!

Of course, the announcement, made in English, hadnât actually said thatâat least not the last part. But that was the message I received as the disembodied voice attempted to employ some form of decorum while, literally a few feet from the tomb of Saint Peter, a sign pointed the way to the uscita (exit) and the souvenir shop, where they mostly sold religious-looking relics. At least they werenât selling Pope bobble heads. You could only find those outside the Vatican walls.

How does this relate to Magic? It doesnâtâat least not to anyone paging through the multitude of photos on my Facebook page. But to you and to the people who will be standing beside me covering Pro Tour Born of the Gods, itâs a big part of the reason we do what we do.

Magic has taken me so many places over the years that it has become a significant part of the experience for me. I donât do coverage just because I love Magic and writingâthough I do bothâI do it, in part, because it takes me places I might never have gone to on my own. I have passport stamps from Japan, the European Union, Brazil, Chile, and Canada all in the past two years because of this silly, not-so-little game.

And itâs like that not only for other coverage writers and video-minded folk, but for a lot of players. Iâve watched Martin Juza fall asleep while karaoke raged around him at 5:00 A.M. in Japan, Iâve watched the Japanese contingent chug beer from their newly-won trophies, Iâve beaten Shuuhei Nakamura in a draft mere hours after he won the corresponding Limited Grand Prix all while stuck inside during a hurricane, and Iâve eaten the best ribs in my entire life with Nate Price in a random bar in Brazil.

So, as I sit here in my hotel room in Rome, packing and preparing to fly to Barcelona tomorrow, where Iâll stay for two days before hopping on a train to Valencia for the Pro Tour, I thought Iâd share some of my adventuresâand picturesâthat could only have come about because I am a powerful wizard.

Thereâs too much to cover everything I did in my five days in Rome, but Iâll cover the important things. Plus: sculptures with genitalia cut off!

The first and most obvious stop in any trip to Rome is the Coliseum and Roman Forum, ancient, incredibly-well-preserved sights where people used to kill each other or vote on whom to kill next. 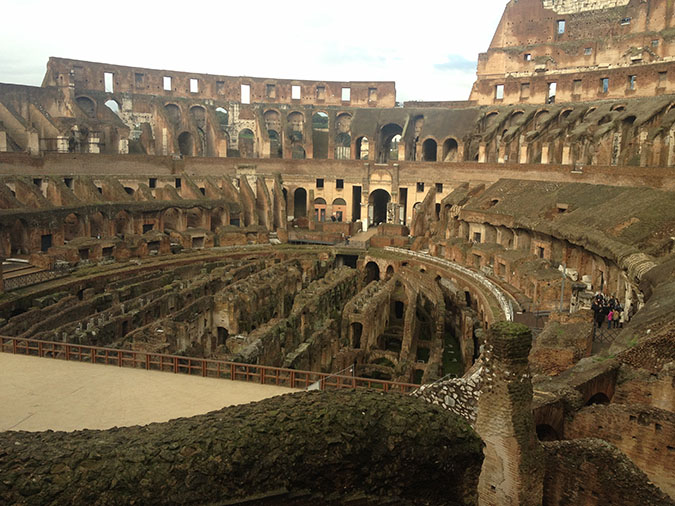 A site mostly famous for that one scene in Jumper. Donât pretend you havenât seen it.

Itâs astounding, and I couldnât do it justice if I posted each and every one of the eighty or so photos I took that first morning. The site is remarkably well preserved for something built literally thousands of years ago and, at times, used as building blocks for other buildings that probably werenât featuring lions fighting humans.

Itâs iconic for Rome, but itâs also odd to think about the fact that it was basically just the sports stadium of its day (built with taxpayer money, because politicians, am I right?). It would be like people trolling through the Rose Bowl in two thousand years and taking audio tours on the famous battles between the Trojans of USC and the Longhorns of the University of Texas, complete with marble busts of Mack Brown, Vince Young, and Pete Carroll. Iâd pay 35 Euro to see that.

Next door is a site thatâs even more impressive, if youâre a political/history geek. And who isnât? 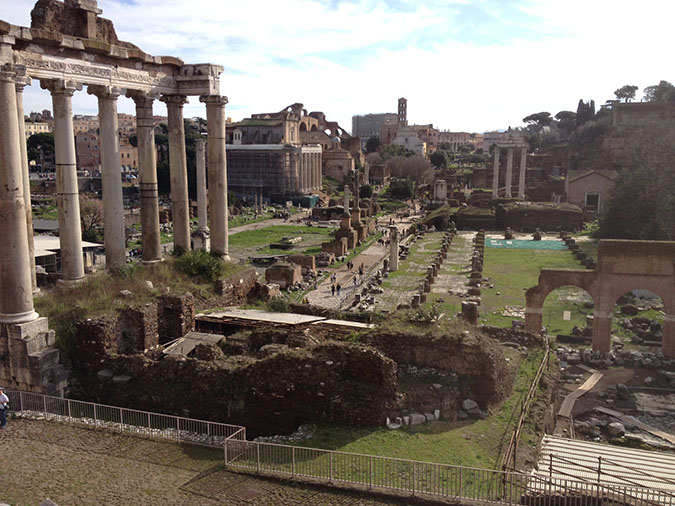 A funning thing happened on the way to, well, here.

The Roman Forum was the site of one of the worldâs earliest Republics and housed more intrigue than an entire House of Cards season (Do not tell me what happens in Season 2! Iâm still in Europe!) To see the columns still standingâand shadows of what was once the seat of power for the entire Western worldâwas pretty awe-inspiring. I strolled the ruins for hours, hovering over even the smallest detail, including this one: 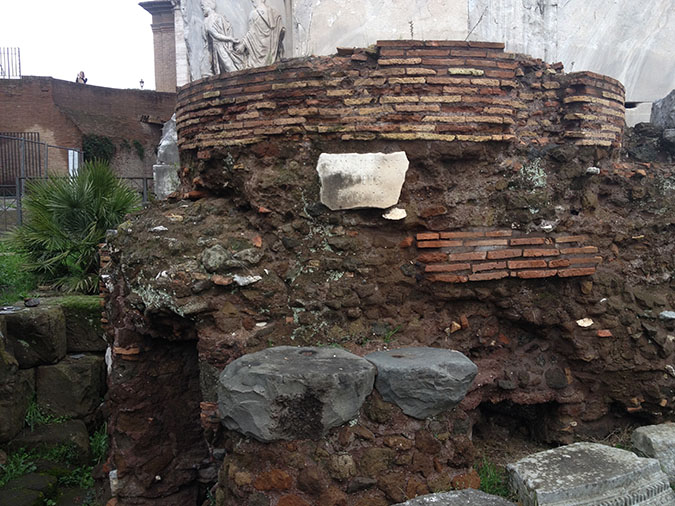 What happens when it freezes here?

According to a nearby sign, this was once considered the ENTRANCE TO THE UNDERWORLD. Thatâs right, this was Hellâs front door.

Nearby were a host of other ruins of places loosely associated with the ancient city center, including this stadio, an ancient non-Coliseum stadium. For, ya know, sports and stuff. 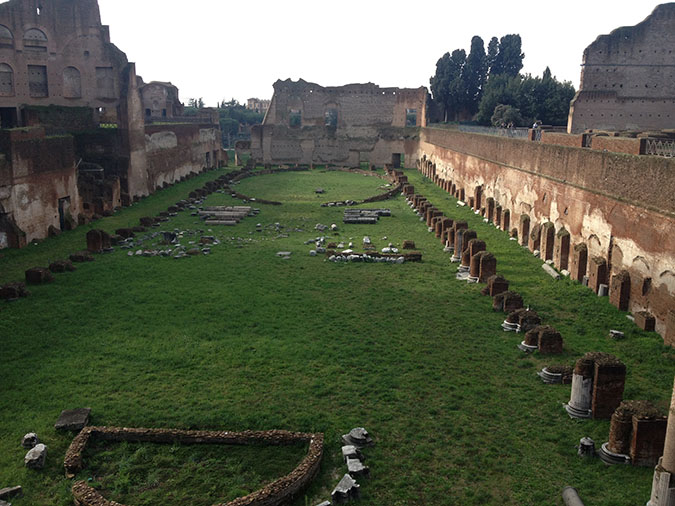 Having conquered the truly ancient stuff, I strolled northward to visit the Pantheon and Piazza Navona. Now, I know itâs a bit confusing, but pizza and piazza are not the same thing. Piazzas are basically public squares. Pizzas are food sold in every restaurant ever here.

The Pantheon is the worldâs largest unreinforced concrete dome. But, come on; you knew that already.

The Pantheon is a big, round building that used to be used to worship the Roman pantheon of gods (get it?) but later became a church. It also holds the final resting place of Raphael. 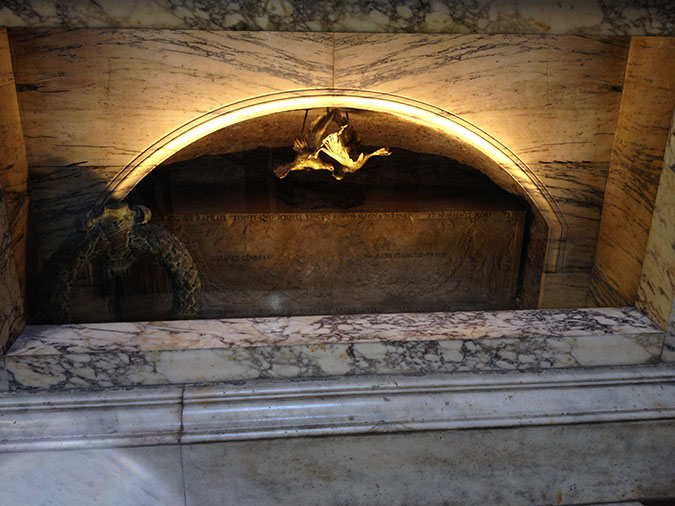 Shredder finally got him. He never could control that temper.

Nearby is the famous Piazza Navona, famous mostly for being a place tourists gather to look at fountains and things like this. 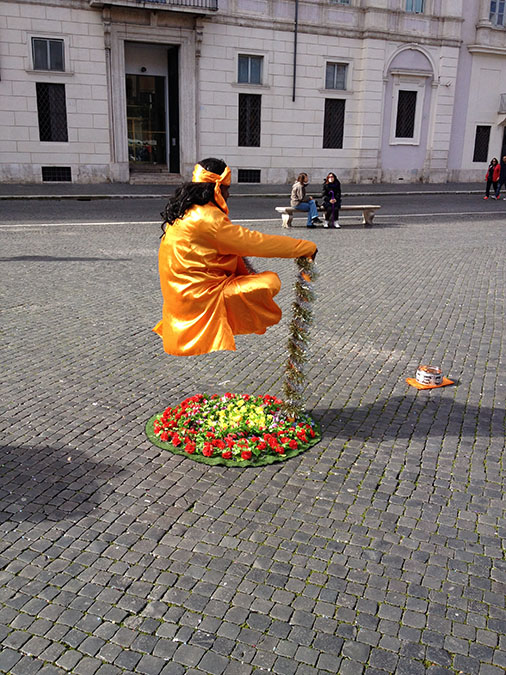 This is either real magic or the easiest trick to figure out since they invented harnesses and hard plastic.

With jet lag setting in, that was it for my first full day, but I had a Vatican tour planned for the next day that could not arrive fast enough. Thankfully, my need to sleep immediately sped things up considerably.

Sped things right on up to 5:00 A.M. the next morning, when I found myself staring at my ceiling. Since my tour was at 1:00 P.M., that meant I needed to kill approximately a million hours.

Now Iâm going to give you a piece of advice. Donât do what Iâm about to describe. Iâm pretty sure Iâll never walk correctly again because of it.

Genius that I am, I decided to kill time by walking to the Vatican from approximately the Coliseum. It wasnât a terribly far walk, but I had a ton of time to kill, so I figured Iâd meander and get to see a whole bunch of Rome that way.

And I did. But so did my feetâso much so that I started out an e-mail to my girlfriend back home with one simple line.

By the time my tour came aroundâa tour scheduled to last three hours, by the wayâI had already been walking for hours and hours. It was literally painful to stand.

But, along the way, I did discover a few museums, a farmerâs market, and even a bar run by former Americans that can be described as, at best, a hole in the wall and, at worst, the kind of place idiots go when they hear âAmerican barâ and canât find the Hard Rock CafÃ©.

The tour covered the Vatican museums, the Sistine Chapel, and St. Peterâs Basilica, and I took many, many picturesâjust not of the Sistine Chapel. They donât allow them in there. Suffice to say that everything is much smaller in person. Still, there were some amazing classical-period pieces of art. 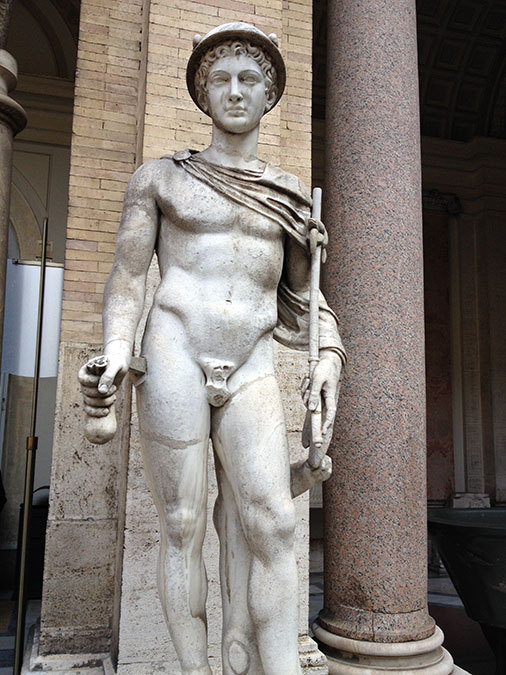 Here you have a wonderful example of Roman attempts to copy Grecianâ.â.â.âPENIS. YOU CAN SEE HIS PENIS, AND IT'S MISSING! 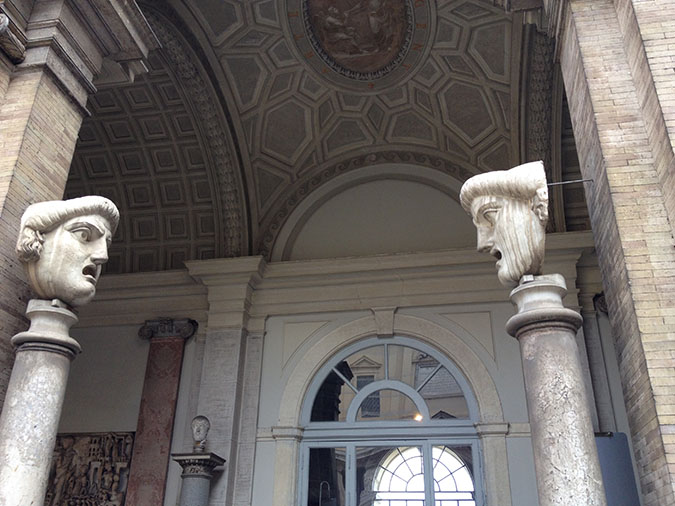 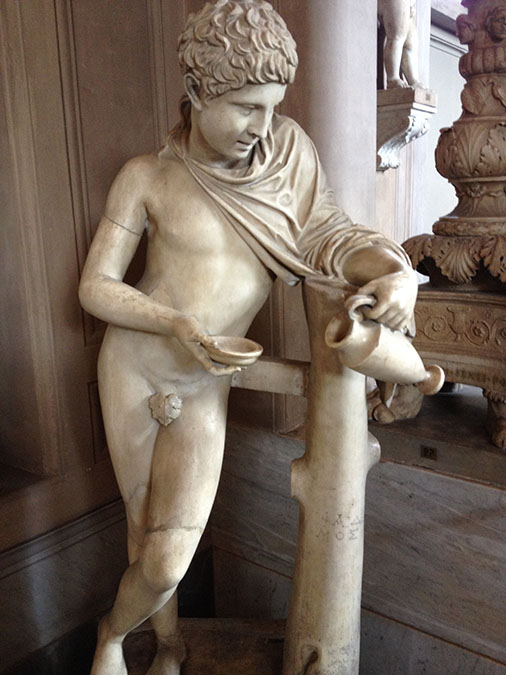 Did you see Mad Men this weekend? I totally called it. 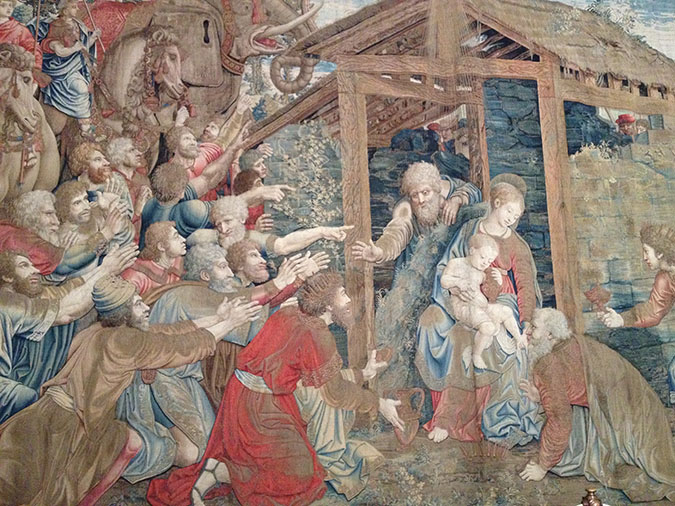 I said weâre out of Modern Masters! Stop asking! 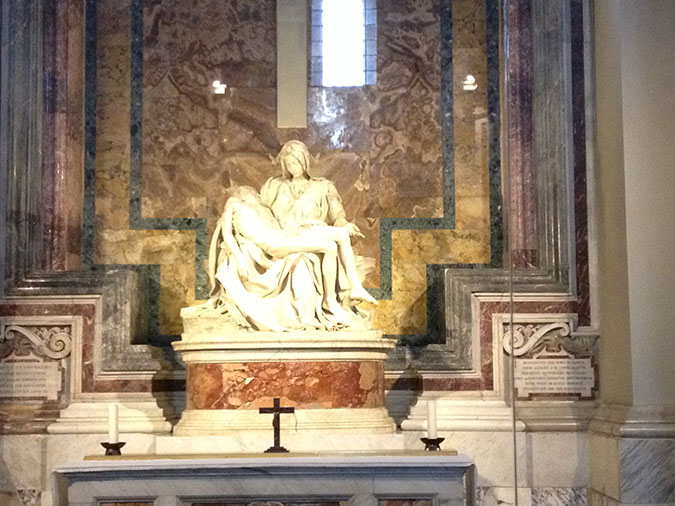 This is a pretty sacred depiction of Mary and Jesus. There is zero chance Iâm attempting any joke here. Plus, you have to hand it to the sculptor Michelangelo. The guy could sculpt. And he knew his way around a pair of nunchucks. 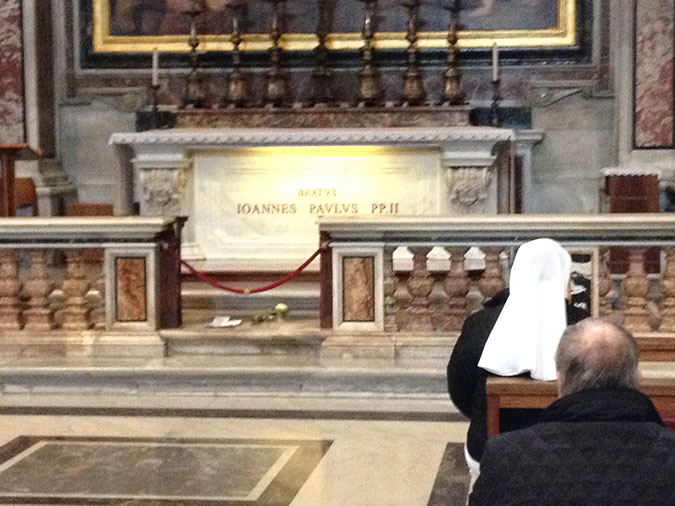 The tour guide called this a âmodestâ tomb for Pope John Paul II, as if people get solid marble coffins all the time. 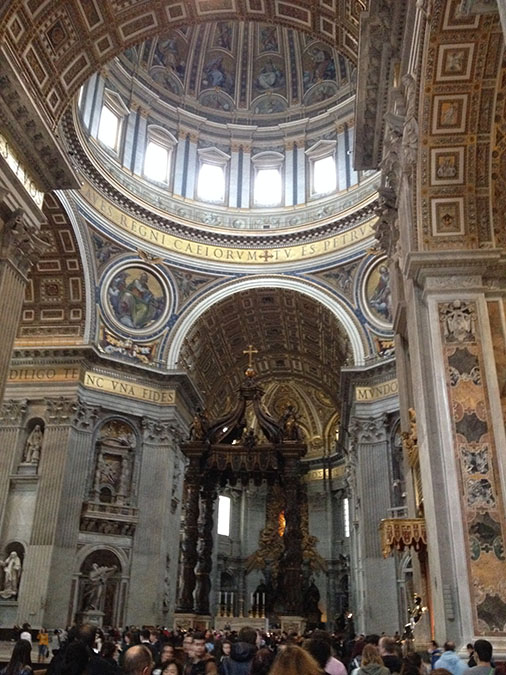 The dome of St. Peterâs Basilica is literally lined with gold. Seriously, âmodestâ isnât a word that should be used in here at all.

The tour was absolutely worth both the pain and the cost, and part of me wanted to go again before I left. But there was so much more to do, including seeing the acres of well-preserved ruins and a still-standing castle in Ostia Antica, the one day trip I would have time for in Rome. 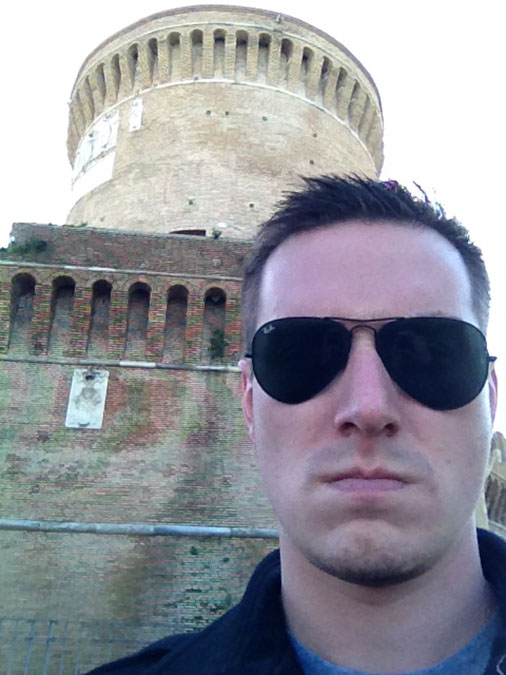 Sorry, the princess youâre looking for is in another castle.

Ostia Antica was once a port town for Rome and has been remarkably preserved by, apparently, closing down for like a week after it rains.

So I took the trip down only to discover this after arriving. The castle was closed tooâfor reasons I canât fathom. This left me with little to do once I returned to Central Rome, as I had planned out what I wanted to see pretty exactly.

Instead, I meandered to see a few sights andâas luck would have that it was Fridayâa Magic store! 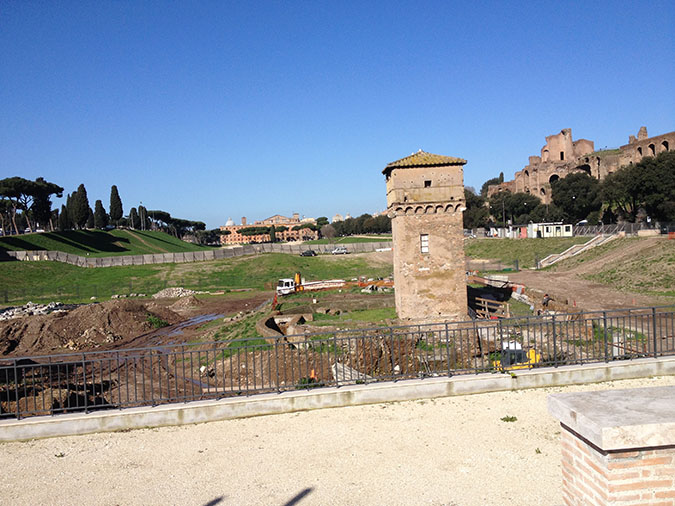 A literal hole in the ground

Thatâs not the Magic store. Thatâs Circus Massimo, the place with the chariot races and whatnot. Only there wasnât much to look at. It was, as it turned out, not far from this place, however. 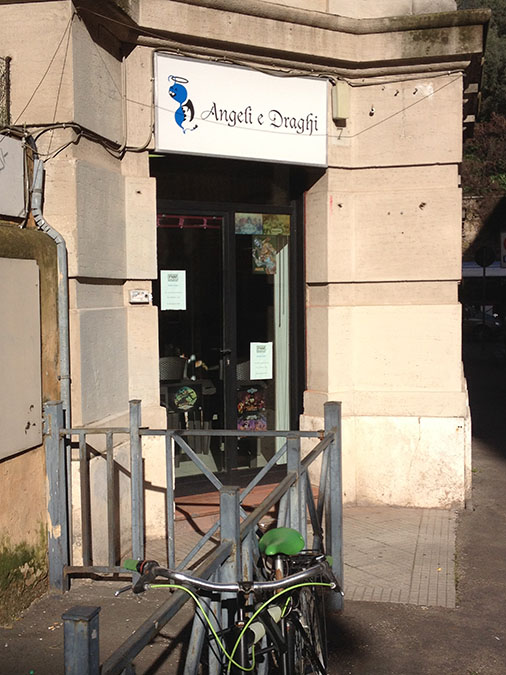 I chatted with the owner for a bitâsort of. His English was limited, and my Italian was pretty much just âhelloâ and âthank you.â He did manage to tell me the store pretty much played just Standard and Modern and that Friday Night Magic that night would start at 16:00 (4:00 P.M.), which he typed out on a calculator. I had my Commander decks with me, but as I rarely play anything but Draft and Commander while on the road, I didnât have any Standard decks with me. I certainly wonât let that happen again, as a night playing FNM in Rome would have been pretty cool.

Plus, I already have my set of Kiora, the Crashing Waves for Bant Control.

Are you ready to be thrilled and excited? Check this out! 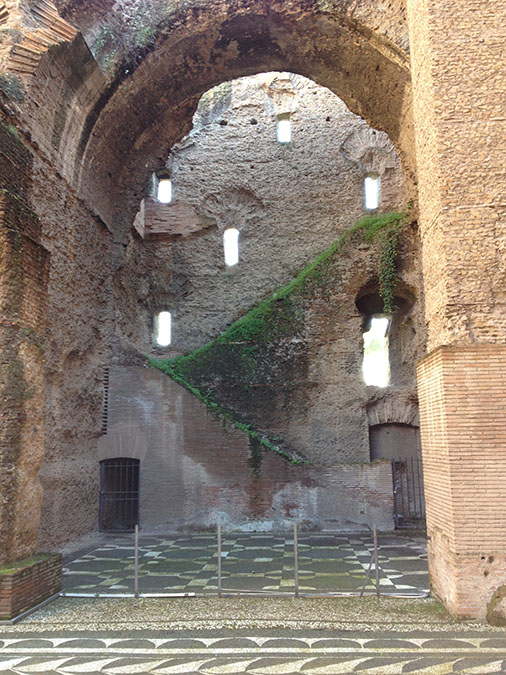 Terme di Caracallaâessentially a giant bathhouse-turned-park with all kinds of ruins still standingâwas the start of my fourth day in Rome. And it was pretty awesome. Ya know, for ruins. 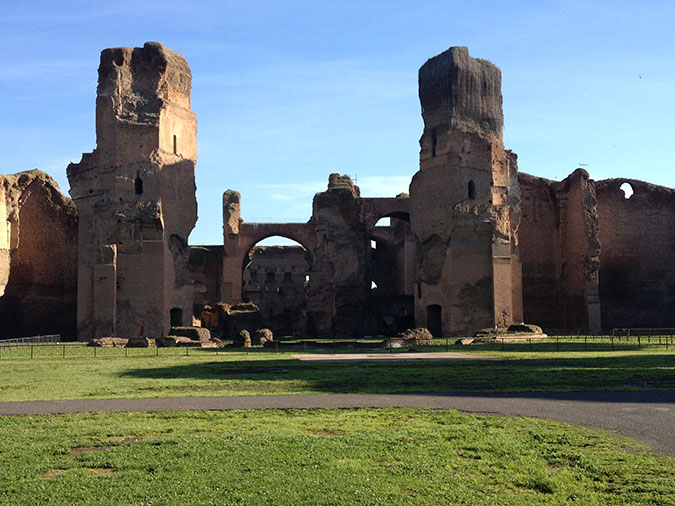 I donât know if youâre ready for it, but MORE RUINS! 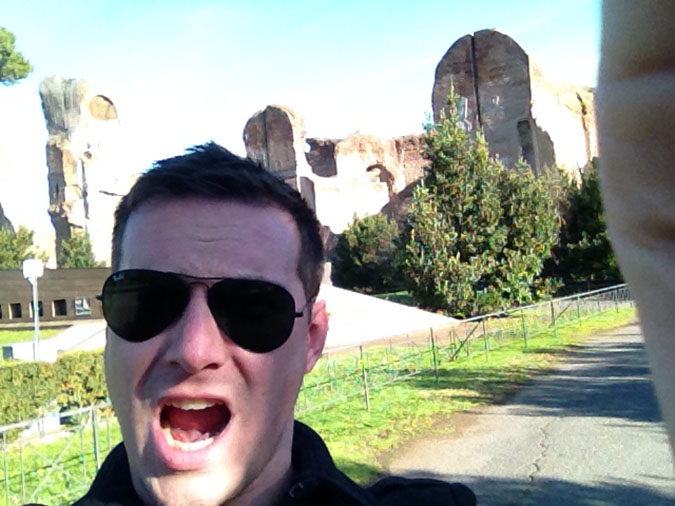 After Terme di Caracalla, it was on to the northern part of town and the Trevi Fountain, famous for being really awesome and for a hot chick dancing in it in a 1960s movie. 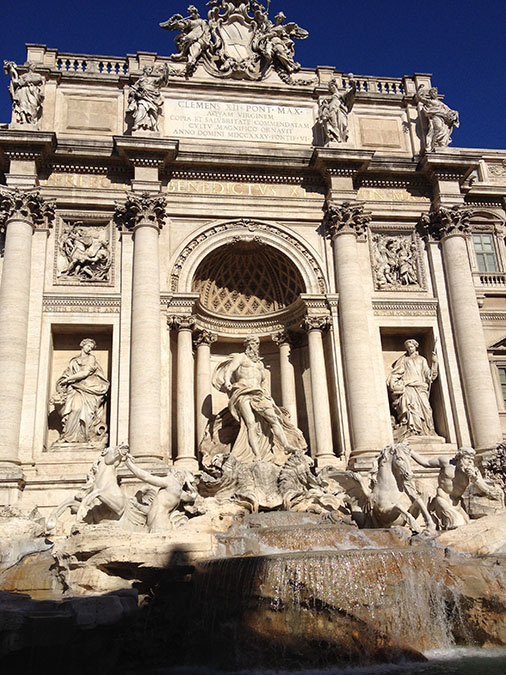 Not shown: Hot chick dancing in the freezing water.

I also checked out the Spanish Steps, another place famous for its beauty, for its craftsmanship, and for being a place where a lot of people wander aimlessly and take pictures of themselves. 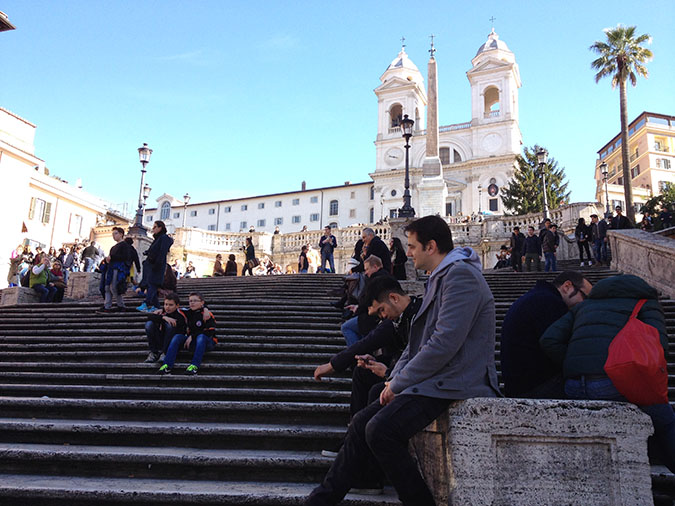 Along the way, I made sure to take note of the random and beautiful art that could be found absolutely everywhere. 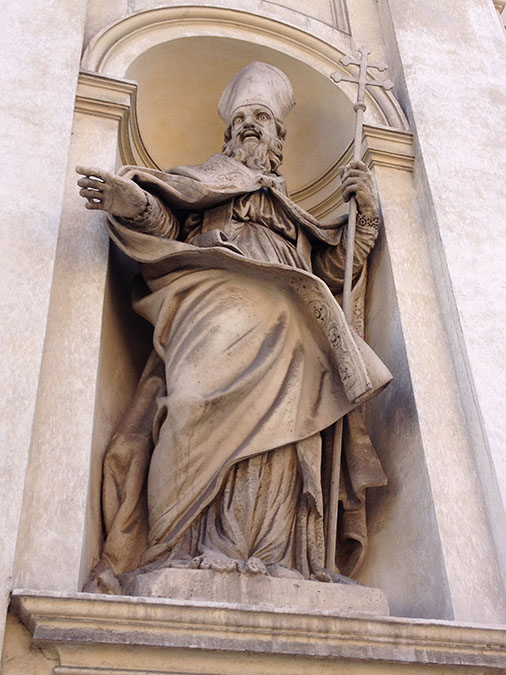 Banisher Priest, presumably after Fiend Hunter was deemed too difficult for new classical sculptors to understand. 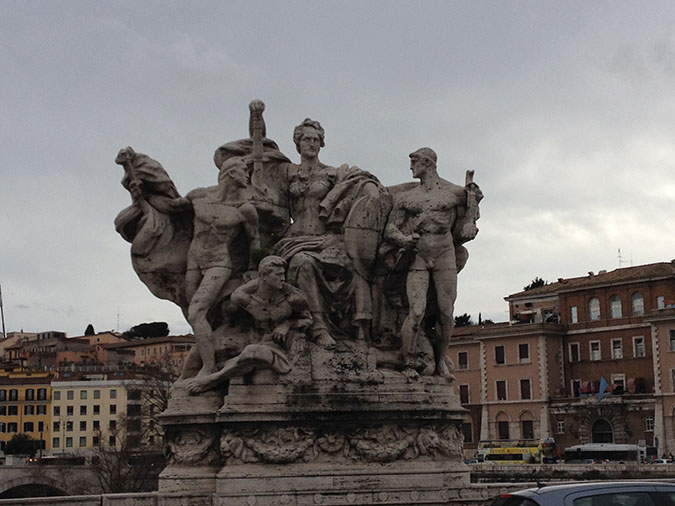 Team ChannelFireball poses for a picture. 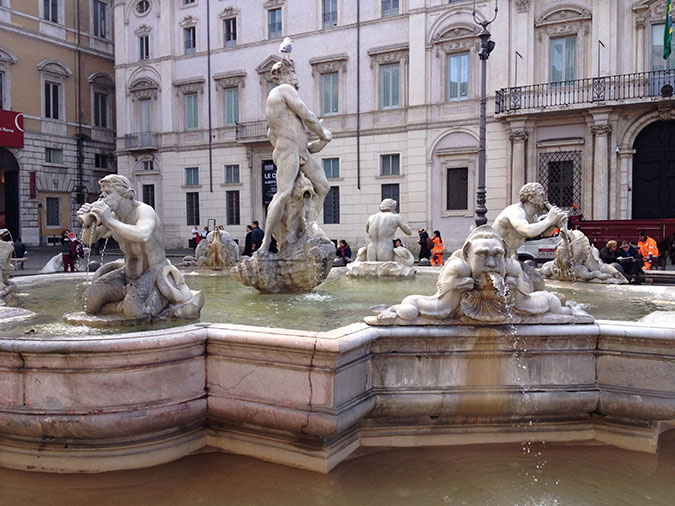 The fountain swore it would never drink again. 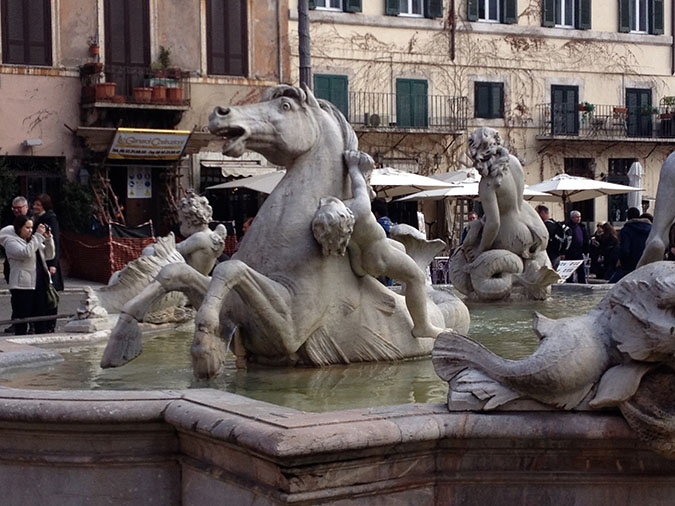 GET THIS BABY OFF ME!

One: Everyone loves Americans. 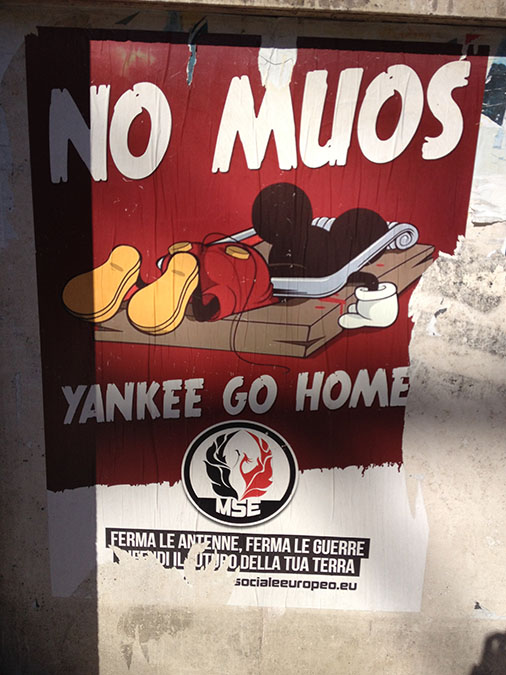 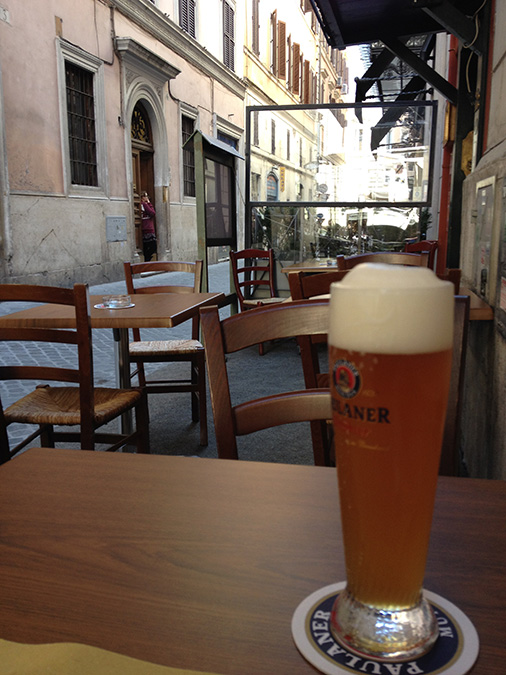 And three: Italy truly embraces the tourists who flock to its city. 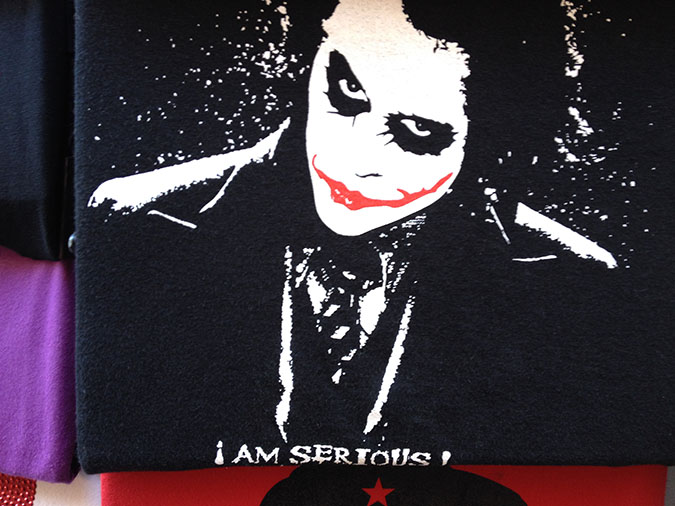 Italy totally gets us.

But, most of all, I learned that Magic can take you to some amazing places. And when you get there, the best thing you can do is stop to look around for a while. 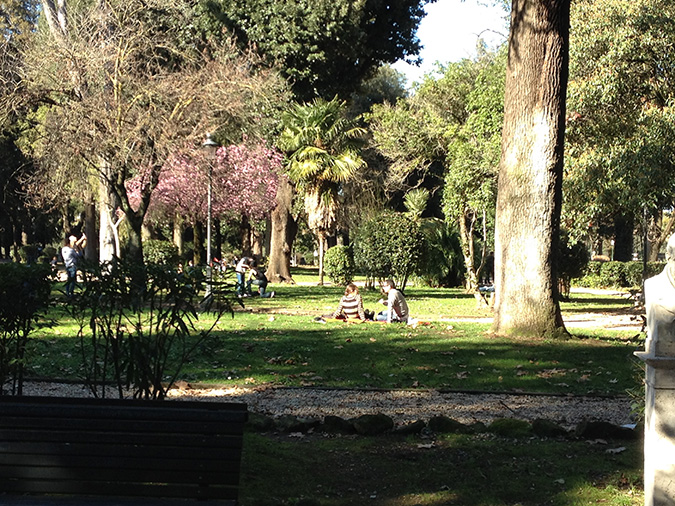