I expect most of you reading this attended a prerelease somewhere. I know I did (or at least I hope I did, since I submitted this article before prerelease weekend). I'm betting most of you had a good time. You probably pulled a mythic or had a fun deck. Some of you won prizes! Most of you had a chance to laugh and hang out with your friends while getting a feel for what looks like an amazing set, Guilds of Ravnica.

You know who didn't get to a Guilds of Ravnica prerelease? 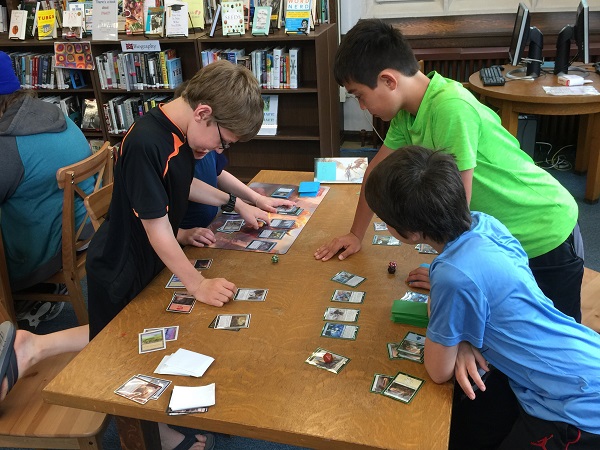 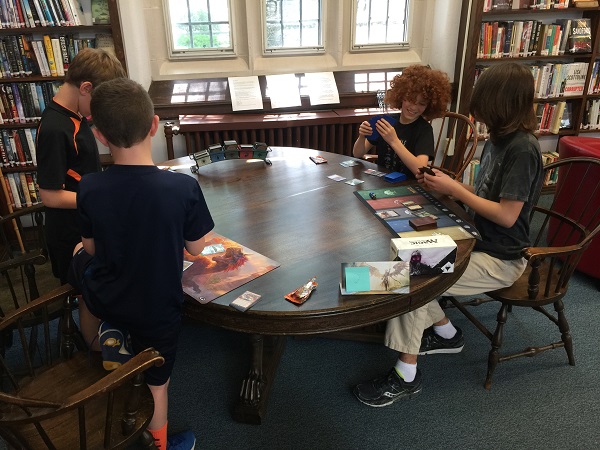 These kids, along with more than 30 others, would have been at the prerelease I regularly hold at our local community library, but the Wizards Play Network (WPN) shut down my prerelease.

The situation is pretty straightforward. I went to my local card store (I am excluding the store name and owner's name to keep their privacy) over eight years ago and offered to be the TO for his store. The store itself is tiny. There is a row of glass cases that feature mostly baseball cards, with Magic packs and other products on the shelves along the walls. The store is simply too small to hold any tournaments. This means that all of the store's tournaments were held, and were always held, at our local library.

This had worked out really well for everyone involved. I was able to host the prereleases at the local library for the neighborhood kids, and a few from the surrounding towns. We do relatively small events, virtually always capping out our attendance at 36 players. I send out an email to all the regular players and their parents over a month ahead of the prerelease and I'm sold out long before the date of the prerelease. The store owner had a store that was a WPN store, so his store was listed on Wizards' website and he received all the perks a WPN store gets: Buy-a-box promos, From the Vault sets, Commander Anthology packages, and the like. Many of the WPN perks are items with extremely limited supply and higher profit margins. This was a boon for his store.

The library loves the setup. They let us play for free. We have the best attended program at the library and it is one of the longest running programs there too. They love having the children in the library; it has even led several of the children to take out books and read!

The kids like having a place to play nearby where they get to play with their friends. I give out deck boxes, play mats, and dice. The friends I play Magic with have extensive collections, so most times, the newer, young players all walk out with hundreds of cards from our collections. I wanted everyone to win at least one pack, so even the newer players who are 0-3 are still fighting for a chance to win a pack! In the second round, I give away a pack to everyone (we call it the Oprah round ie. "You get a pack, and you get a pack, and you get a pack!"), and if anyone ends the tournament without a win, that player gets a pack too.

This has been a great situation.

A couple months ago, the store got an email from WPN requesting a re-verification. They wanted a video walkthrough of the store to update their records.

We contacted WPN and explained that none of the events we ran were at the store, and asked if they would prefer a video of the local library. A video of the store seemed pointless, especially since there was no play area or public bathroom in a store that small. They wanted both though, so, a week later, we submitted both.

We were surprised that we would lose our status over this. We expected that we might be asked to upgrade something or improve on something to keep our WPN status, but deactivation seemed harsh. I wrote a long email back to WPN (edited below), appealing their decision.

I'm Bruce Richard, the TO for [our store]. I am writing to appeal the deactivation of [our store]'s WPN account. The reason the store doesn't have a dedicated play space is not for lack of effort, but simply due to the size restrictions of the store itself. The space [between] the glass display cases is barely six feet. Even removing all the glass cases on one side of the store would not create a space big enough for 12 players to play Magic.

In fact, it was for this reason I initially approached [the owner] and asked him to sponsor our Magic group at the Library. At that time, we were told we could no longer run prereleases without a store to sponsor us. [The owner] owned the closest store, the only store in Newton that sells Magic cards, but the store isn't big enough for tournaments. [The owner] sponsored our tournaments and in return became eligible for all the products only WPN stores can get. While the situation is different from many other locations, it has worked out wonderfully here.

The Magic group at the Library is different in that it is made up completely of school age children. Our Prereleases have had players as young as 7 years old and as old as 18 (excluding myself once)! I wrote about our prereleases for Trick and Blake on the Mothership! Check out the links below to see some of the articles that went up on Wizards' own site:

The reason it is so important to [the owner] and I that we keep WPN status is for these prereleases. Most of the children who attend would not be permitted to attend prereleases otherwise. Their parents are hesitant to allow children so young to be dropped off at the closest game stores. Those stores tend to be in more questionable neighborhoods. The children will be left to play against opponents who are college age or older. The parents would have to stay at the store the entire time and that simply won't happen. The stores don't offer the flat prize structure and door prizes that we offer, as they are catering to older teens and college age players, while we are trying to create a fun experience for even the youngest player who is 0-3 but still excited to win a pack in the final round of the prerelease. Without our prerelease, over half of the players who attend our events simply will not be attending any prerelease.

The all-volunteer staff at the Library (it is a community supported library) love the tournaments as it is one of the only ways they are able to get young boys into the library and around books...

I understand [the store] doesn't meet the new standards for the WPN, but I'm confident the intent of the standards isn't to shut down a thriving Magic community of young players. I have almost 200 email addresses in my mailing list that I send out before each prerelease. The children enjoy the weekly events, but the prereleases are the special events that the children are so excited about. Please reactivate our WPN account so we can bring the Guilds of Ravnica prerelease and future prereleases to these young players!

If you have any questions or concerns, please don't hesitate to contact me...

I know that some friends inside Wizards of the Coast offered their support, vouching for me and what I was doing at the library. All of this fell on deaf ears:

To be up front, we will not be re-activating [your store]'s WPN account. If the store were able to have a dedicated play space that is suitable for at least 12 players, we would reconsider. WPN guidelines are aimed at enforcing standards that ensure consistency among other qualities that we feel are important to the player experience. We cannot grant an exception, given that the WPN membership rests with the business, and not with your separate play location.

With there being a number of stores in the area outside of [your store], we suggest reaching out to others to consider sponsoring your Magic group. That way, you have a chance at providing your players with the same experience.

There isn't much point in relaying the next bunch of emails. The guidelines that they have laid out make sense... if you are running tournaments out of your store. The idea that there should be a dedicated play space for at least 12 people makes sense. The idea that there should be a bathroom also makes sense. I would love to see clean bathrooms everywhere I go to play Magic! My store, however, doesn't run tournaments in the store, so forcing these guidelines on them is pointless. I reminded WPN that these are guidelines, something by definition that is meant to guide, not rule. I spoke to the next person up the chain and explained the situation again, with the same result. I suggested the guidelines be changed to read, "locations where WPN events are played," thinking this would be even more broad, since it would still include the stores that hosted events in store, and those that ran their events outside the store. Simply no on all counts.

It is just amazing to me that WPN guidelines, guidelines that could easily be changed to be better than they currently are, have created a scenario where young players aren't getting to play in a prerelease. The library prerelease is a good thing that is providing young players a chance to play in prereleases and he WPN, even with encouragement from other parts of Wizards, doesn't recognize this! I appreciate wanting "consistency," but different can be good too. Consistency means no split cards. Consistency means no double-sided cards. Consistency means no planeswalkers. What was happening at the Library was producing planeswalkers for years to come, along with profit for Wizards right now! 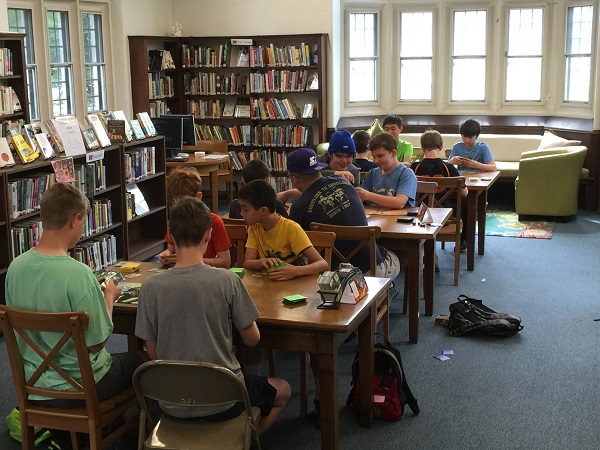 Of the 36 children who would have attended the Library's Guilds of Ravnica prerelease, about half of them will go to prereleases elsewhere. The remaining children are just missing out. 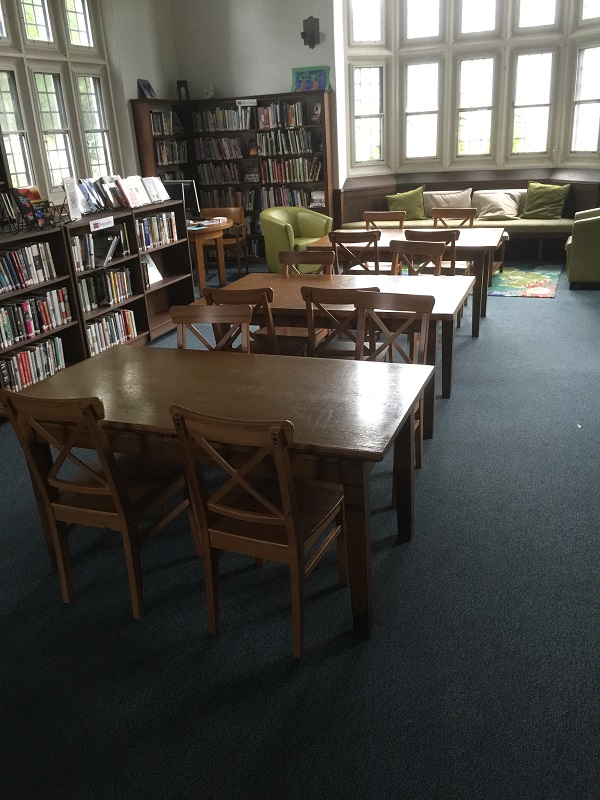 As a quick update, Wizards reached out to me the same day this article went live. They have offered to send product to make a tournament happen for the children at the library! They have also offered to help facilitate getting together with a new store. One of the difficulties in working with WPN stores is that allotments are based on previous prerelease numbers. If a store were to suddenly offer another prerelease and request 36 more prerelease packs, WPN would give a handful of packs, which would mean that their store would be very limited if I was to get 36. WPN has offered to help with the allotments, so everyone gets all the prerelease packs they need. This will go a long way to setting up the library for the next prerelease!

So, while WPN is still unwilling to change their guidelines, the children that were affected will not suffer! I'll be sure to post pictures after the tournament is run!