Our first visit to Zendikar introduced us to a wide cast of characters and locations, many more than most people realize. Oath of the Gatewatch continues the trend Battle for Zendikar began, providing us with renewed glimpses at signature sites and people across the plane. What icons of Zendikar have changed in the years weâve been away?

Bloodchief Tenihas was once ruled over House Ghet, the poorer of the five vampire families that existed on Zendikar. As a leader, Tenihas took great efforts to hide the vampiresâ history of Eldrazi enslavement from Anowon, the Ruin Sage. In a mysterious and almost legendary event, Tenihas was murdered in his own bedroom. The only witness to the event claimed it was the absent Anowon, and a void opened up in the leadership of House Ghet.

Kalitas, Bloodchief of Ghet controlled the house when we first visited Zendikar, though it is unknown whether he had access to the historical texts of Tenihas. When the Eldrazi awoke, Kalitas was all too willing to return to subservience. After the Culling, an event in which Ulamogâs brood slaughtered countless vampires who refused enslavement, Drana and Kalitas were the only bloodchiefs to remain on Zendikar, each in strong opposition to the other.

Kalitas, Traitor of Ghet now leads his mindless ranks across Zendikarâs landscape, eliminating all vampires they come across who managed to avoid the Culling. He directed an attack on Malakir, attempting to force Drana and her followers to join under the dominating Eldrazi will, but he failed miserably when Drana liberated the city. Kalitas continues to sire more vampires to refill his Eldrazi-controlled ranks, but in contrast to those he leads, Kalitas maintains some level of autonomous thought while under Ulamogâs twisting influence.

Kabira Conservatory once stood as an outpost for research and scholarship on the plane of Zendikar. This Onduan academy dedicated its resources to studying the Hedron Fields of Agadeem, relaying findings to the Lighthouse at Sea Gate on Tazeem, where academic minds like Kendrin were hard at work unlocking the puzzles of the leylines and hedrons.

Following the freeing of the Eldrazi titans, Kabira Evangels have remained in denial of their godsâ true forms. Their sect believes that the angels are using the Eldrazi as a tool for punishment, making the alien monsters agents of retribution for sins of the Zendikari people. Despite the evangelsâ restrictive policies for atonement and repentance, Ulamogâs brood took no caution in the destruction of their community and home. 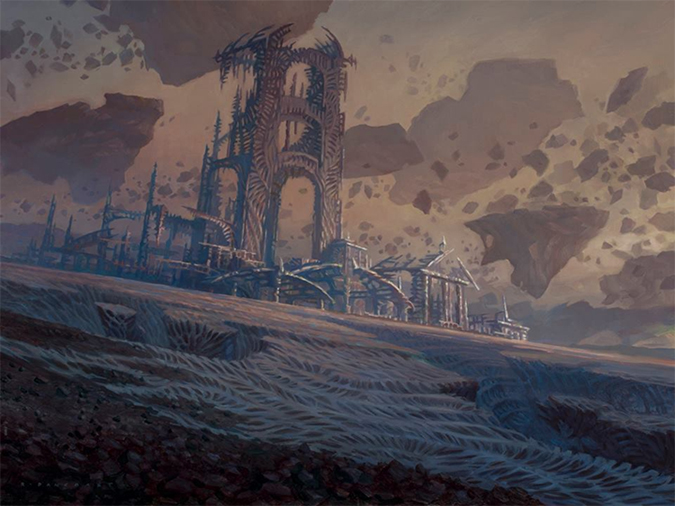 When Linvala, Keeper of Silence was debuted by Doug Beyer, she was recognized as a powerful ally for the Zendikari forces. Linvala was the angel who represented an idealistic future of Zendikarâone of peace and tranquilityâ but that true destiny is held too far in the future. Two titans now ravage Zendikar, hastening its destruction, and Linvala cannot sit idly by in hopes to rule over quiet times to come. Linvala now serves as a preserver of life on Zendikar, bringing angelic support and much-needed vitality to the battle for Zendikarâs survival.

âLinvala may be a sign of a bright future for Zendikar. Her weapon is a subtle but powerful oneâit is silence, the power to halt the noise of evil powers. She's helping forge a new world with this gift of silence, cutting off the roars of the oppressors, letting gentler voices be heard.â
âDoug Beyer, The Defiance of Angels

Throughout the story of Battle for Zendikar, an important point of resistance in the fight against the Eldrazi has been Sea Gate. We entered the story of Battle for Zendikar with âSlaughter at the Refuge,â a losing battle to hold the location as Ulamogâs brood continued its onslaught, leaving retreat as the only option. With âThe Liberation at Sea Gate,â the allied forces were able to retake the vast wall some time later, quickly declaring it their tactical headquarters once the titan Ulamog was spotted in the distance.

There were two knots in their plan. First, the Planeswalker Ob Nixilis had followed Nissa Revane back from the barren continent of Bala Ged. Second, Ob had plans of his own, summoning Kozilek from the undergrounds of Zendikar after the reignition of his spark. âThe Rise of Kozilekâ followed Kiora as she tried and failed to combat the powerful titan Kozilek with her theived Bident of Thassa and awoken Lorthos, the Tidemaker. Both Ulamog and Kozilek are now loose on Zendikar, but Kozilekâs signature bismuth wastes are seen on Sea Gate Wreckage, leaving a massive chasm for waters to flow freely from the once-dammed Halimar sea.

Last, we have Oran-Rief, the Vastwood. It was one of the most visually complex locations on first visit, presenting us with a massive web of vegetation and stone that endlessly tangled to shroud almost all light. The environment concealed under the overlapping branches and brush thrived in the magically wild and isolated habitat. It was home to the larger creatures of Zendikar, but its proximity to the Eldrazi-controlled Sea Gate on Tazeem did it no favors. 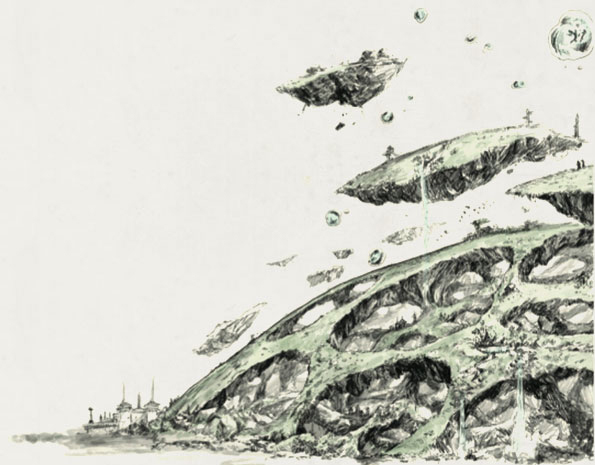 At Oran-Rief, the many layers of life are lost, consumed entirely by Ulamogâs brood. Ruins of Oran-Rief are added to the growing list of lost locales, absent of mana and everything they once were. Even if the Eldrazi are defeated on Zendikar, these places can never be restored. What will be left of Zendikar to inhabit if location after location fall, unprotected from the Eldrazi titans?

Zendikar is changing, but itâs not for the better. Have you spotted any other revisits throughout Oath of the Gatewatch? Keep an eye out for more and, until next time, happy planeswalking!