It's been a few weeks of valuable theory, but it's time to put that away for a minute to talk about Kaldheim cards. Based on the previews so far, the set has a lot of interesting ideas and themes to mess with, some of which are revisits from past releases that I've really enjoyed. Snow belongs in January. With you so far.

I'm at a point in my Magic life where I'm much more concerned about the game being co-herent and set up for the long term than I am about parroting about what I think is broken to other players doing the same thing in a cold huddle somewhere. Ikoria, in particular, was a scary set for me in terms of seeing what a runaway train some of the development values are now. 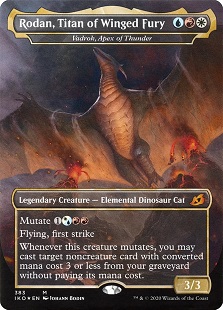 Ikoria was the first set where I became concerned that the fundamental ingredients that make up the Magic ecosystem had become so warped that it might be heading toward detrimental turbulence. In 2021, Wizards of the Coast is both circumventing the card alters market and the self-awareness inexperienced designers feel when doing weird rubbish on MTGCardsmith because that's what a lot of the output looks like: unfriendly, convoluted, complex.

This is not an image of a product in which the creators are concerned with complexity creep.

I'd love to comment on this card and what it means and what it does, but by the time I get halfway through the passive part of the back, I've lost interest. The card obviously seems playable just on the front business, so why it had to have another card glued to the back to presumably justify a lot of creative worldbuilding that won't connect or come across in 99.9% of real game experiences, I don't know.

I mean... it looks busted or whatever.

Would This Article Fit on a Magic Card?

No, but seriously, but that's the issue here.

The most glaring problem with this set so far is that the word counts are packed. When we read some of these cards it becomes instantly easy to empathize with everyone throughout our lives that we wanted to teach about Magic but that who had no idea what we were on about. Forgive us, friends and parents. Until now, we didn't understand.

In a clever bit of design here, reading this card is a winding journey of twisted, serpentine information tracking. Flow charts, bullet points, and the overgrazing of the double-face card space is not on my personal wishlist, but everyone loves a legend!

Hey, speaking of overgrazing and legends, here is another Kaldheim feature:

Between the supplemental products bonanza always going on right now, the (belated) move to just move planeswalkers over to legendary rules space already, and Dominaria, I think it's safe to cut back on what we do with legendary. I know it's the fuel that drives the format that drives the game's biggest undercurrent, but we've reached such an oversaturation that it feels prudent to remind the world:

Same situation. We went forever without Gods, legends, planeswalkers at various points, but now it's all of them all of the time. No finesse, no scaling - just take whatever does well in the surveys and do more more more of it, regardless of how it affects the rest of the elements. The result is a feeling of complete mechanical claustrophobia. And I've played this game forever. I can keep up with game states (ish), but not all cards should be designed for me; people need to be able to approach this already intimidating game without having to sit down in a comfortable chair to read its most powerful new game pieces.

Other elements that weren't even around that long ago that are constantly trying to find space in the conceptual elevator also include vehicles and sagas.

There is already an equipment (costs colored mana, by the way) previewed that has no room to explain what equipping even does in its text. That's not very New World Order, and I don't think doing it is a good idea.

Speaking of dirty and wordy, look at this:

This is an uncommon with a middle line that goes all the way across the card. It's obviously legendary because what isn't. Look at this ability, though! It reads like a child coming up with a story on the fly.

"It's a monster that lives in the snow. And it can copy things and pretend to be like them. And except if..."

I seriously don't even like making my Cube experiences for veteran players this mechanically complex. These cards really seem overdesigned and underdeveloped to me. There are always going to be cards for me to enjoy picking out and playing with for my own purposes, but this set has done nothing to lower my long-term concern with the game's increasingly insulated design principles.

It reeks of a game being made by and for only those already waist-deep in it. We need a way to make the game friendlier, even if only selectively, or it's never going to grow, no matter what arbitrary metrics and analytics get put out in the service of satisfying an invisible shareholder class with nothing to do with the culture of the game.

Though I've been critical of the direction this set seems to have taken (among others), I do want to give a happy shout to whoever worked on this little bonded pair.

I'm over the need to include every subtype in every set these days, but as far as legends, vehicles, or colored artifacts go - mind you, all novel in their own right in a more disciplined regime - this is conceptually adorable, delightful, and fun. I wish to own foil copies and I hope they reach a battlefield of which I am attached someday.

It's a little bit Leonin Warleader, but you know. I like them.

Good on you, thankless card designer and/or developer. You've made a tattered mage purr with distant, abstract companionship. Meow meow.

Please note this is not an invitation to give them names, exhaustive backstories, or to ignite their planeswalker spark. Don't try so hard to impose.

Let us lie together and form our own attachment. That goes for any other cards you care to apply it to as well.