As I write this, every casual player is salivating at the thought of Conspiracy! As a proud member of the Casual Tribe, I look forward to forking over many rupees when Conspiracy hits my LGS. But now that the set has been spoiled in all its glory, take a second to look under the hood.

The reprints are fanfriggintastic; you had me at Pernicious Deed, but there are also some very smart pieces of multiplayer technology at the lower rarities. Some of my favorites are Mana Geyser, Victimize, and Respite.

The Draft cards are a little bit different; theyâre brilliant (at least three of them making me laugh out loud in public when I first saw them), although they only work in Draft, so once you play them, you may need to play more Draft formats, make a Cube, or forget about them.

But naturally, I most want to talk about the new multiplayer cards. Itâs a great set, and I donât want to look a gift horse in the mouth, but some of the cards rub me the wrong way, because the ideas behind the cards make it clear that Wizards of the Cost is full of folks who donât really understand casual multiplayer. The majority of Magic players are casual, but the majority of card designers and developers are tourney types, and there is a cultural difference between us that I think makes it hard for them to design multiplayer cards. My goals today are to show that, at some level, Wizards doesnât fully understand casual play, explain how this hurts their multiplayer card designs, and suggest how they couldâve been designed better.

All of the mechanics for Conspiracyâdethrone, parley, and will of the councilâbetray the same basic misapprehension of multiplayer, which is that itâs all about playing politics and not making enemies. Think about it:

Should we be insulted that Wizards doesnât really give us credit for play skill? Perhaps itâs too much to ask that Wizards understands the strategic complexity of adding more players to the game. Sure, politics can play a role in multiplayer, but it is hardly primary and often irrelevant.3 Every multiplayer writer who has ever graced the mothership has said the same thing time and again: The most important skill in multiplayer is threat assessment. The fact that these new mechanics are built around the idea of politics rather than threat assessment is a serious problem, not just with Conspiracy but with the way Wizards makes cards for us.

Itâs not all bad though; let me show you the flaws, but also the upside, in each mechanic.

Dethrone speaks to the lowest common denominator of multiplayer strategy: attacking the player who is on the most life. How many times have you seen some rookie lose a game because he or she focused his or her attacks on the person with the most life instead of the player who was the biggest obstacle in his or her path to victory? This is especially true in Commander, wherein you are never more than 21 points of damage away from death.

So why am I so disappointed in dethrone? Because the potential for this kind of card is so great, but Wizards doesnât seem to understand multiplayer enough to take advantage of it. Dethrone offers interesting strategic choices in some cases: Specifically, how much is that +1/+1 counter worth to you? Is it worth attacking the player with the most life just to put more counters on your team or should you focus exclusively on The Threat?4 Would you rather make your Trygon Predator a 3/4 or get rid of a mana rock from a player who is on less life but is more dangerous to you? Focusing on this, which is the essence of the mechanic, would lead to much more interesting designs. 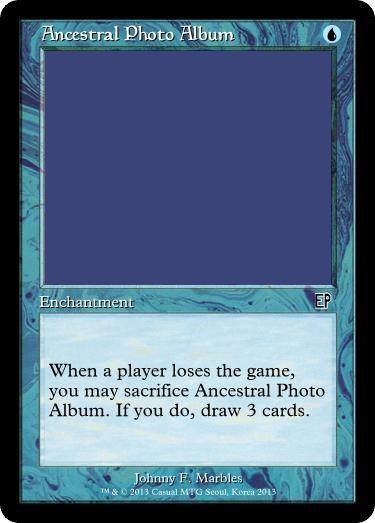 Now you have a real choice: take the weakest player out of the game and gain significant card advantage or leave him or her in the game to potentially help you against a stronger player. And everyone else has a choice, too: use resources to save the weakest player or let you gain significant card advantage. Now thatâs a goddamn multiplayer mechanic!

Want to turn it up a notch? How about a Dark Ritual on crack? 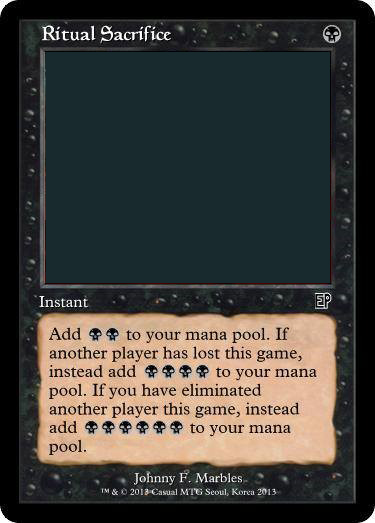 (Thanks to my buddy Johnny F**king Marbles for making the cards all awesome and stuff.)

I call this mechanic Enderâs Game because it really puts the focus on the decision of whether to oust a player who isnât your primary threat and whether to allow others to do so. If Wizards realized this was the strategic core of the dethrone mechanic, Iâd feel better, but based on what they have said publicly, I just donât think they get it.

Whatâs the worst flavor text in Magic? To my mind, itâs Reparations: "Sorry I burned down your village. Here's some gold." God help the emissary who comes around with that half-assed apologyâthe villagers will take the gold, but theyâll also fashion a decorative hat from his scrotum. In real life, if someone screws you over, you arenât going to be satisfied with a token apology, and in multiplayer Magic, itâs just the same. âSorry I killed your dudes; hereâs a card.â Sorry, bro. Thatâs not going to cut it.

And this is even truer of a card like Selvala, Explorer Returned, which is a clear and present danger, at least in the early game. âSorry I ramped like crazy and overwhelmed you. Hereâs a card. Which isnât card advantage for you because everyone else gets a card, too. Even me.â Anyone who falls for that is too stupid to play this game. However, there is a glimmer of hope here, too. Designs that assume that multi-players wonât recognize a threat when they see one are insulting, but cards that truly complicate threat assessment are good.

So why am I so disappointed in parley? Because the threat assessment isnât even a little bit complex. Everyone gets a card, so while Selvala definitely helps her controller, she also helps all your other opponents. She cries out for removal, and everybody knows it. Even simple cards like the Hunted cycle are far richer and more challenging multiplayer design than this.5 What makes parley hypothetically interesting is that the card is hurting you on one axis but helping you on another, so why not focus on that strategic core and makes cards like this: 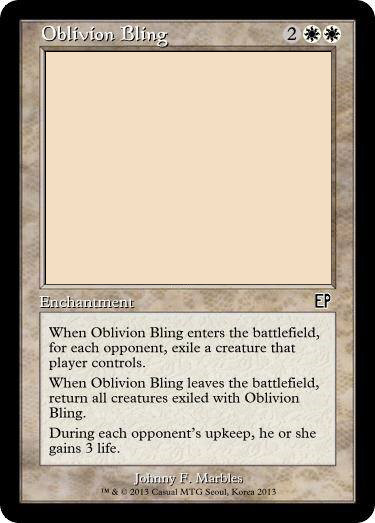 Itâs massive card advantage and tempo for the stinking white mage, but each opponent gains life and knows that his or her opponents receive their dudes back when the Bling is destroyed. No politics, all strategy, and the threat assessment is going to be different for each opponent every time you play it.

Will of the Council

Discussion about targets is one of the elements of multiplayer wherein the strategic, political, and social layers kind of intersect, and I canât deny that I sometimes change the targets of my spells if someone points out a better target for it. But ultimately, Iâlike all of youâmake my decisions about what I think is most likely to help me win the game, which is why I cringe at the thought of Wizards assuming this kind of thing is a regular feature of multiplayer.

In fact, I have a little bit of experience with will of the council, as my playgroup has let me proxy Magister of Worth in my Vish Kal, Blood Arbiter deck since it was spoiled. Hereâs what I know about Magister of Worth:

IF YOU DONâT HAVE A CLUE HOW YOUR OPPONENTS WILL VOTE, YOUâRE DOING IT WRONG.

In maybe a quarter of cases, you might play it uncertainly but know that youâre happy either way; maybe for one case in ten you will play it and be unpleasantly surprised by the result, usually because of hidden information. As always, you can add more politics to your games, but you never have to, and my group usually doesnât.

So why am I so disappointed in will of the council, other than the insinuation that all multiplayer games are decided by politics? Because your opponents are just as smart as you are, and they will vote in the way that best serves their interests. Maybe Wizards assumed that you can get your opponents to agree to anything you want because casual players arenât very good at strategy, but most of the time, a will of the council will be the worst of the two options for you, so the card sits dead in your hand or underwhelms when you cast it.

Look at two of the cards that were spoiled on Monday: Custodi Squire and Council's Judgment. Notice a difference?

Custodi Squire is almost always going to be an Eternal Witness for the worst card in your graveyard. There will be some situations in which some of your opponents might want you to have a particular answer (e.g. Return to Dust), but thatâs probably the best you can hope for. There is some potential for surprise, but it wonât be that often, and it possibly wonât be enough to make the card worth running. On the other hand, there is much more variation for Council's Judgment; maybe you pay

to exile a particular permanent and everyone else votes for that same permanent, or the rest of the table votes for a different permanent, or each person removes a different threat from the board and you gain a ton of card advantage.6 But the difference between asking, âHow much can I talk my opponents into giving me?â and, âWhat threats are my opponents most afraid of?â is huge, and itâs that latter question that is going to lead to the most interesting plays.7 But I donât think Wizards sees the distinction. 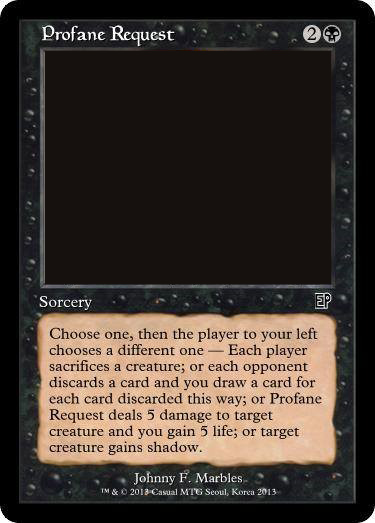 This kind of mechanic forces you to think explicitly about how your opponents see the board, which is where the great gameplay is, and it stops pretending that politics and strategy are interchangeable. In the case of Profane Request, you are guaranteed to receive what you want, but your opponent is able to choose from three pretty tasty options, and you arenât able to choose which of your opponents makes the decision, as it is always the player on your left.8 The cost of this type of card could be lower than any of its constituent parts, as your opponent might use your card to hurt you, but if youâre a wascally wabbit, you just might be able to have your cake and eat it, too. Imagine that one opponent ramps into a brutal fatty and you then cast Profane Request choosing the Syphon Mind option, forcing the player to your left to choose the Innocent Blood effect. I love the smell of value in the morning!

(Legal disclaimer: I renounce any intellectual property related to the design of these cards if Wizards of the Coast wants to use them for Magic. Take my ideasâ.â.â.âplease!)

I hope it is clear that I am speaking as a fan. Conspiracy is a really good product, and I will be first in line for it this Friday, but there seem to be some pretty clear limitations to how well anyone can design cards for multiplayer without understanding multiplayer strategy. I know the good folks at Wizards are doing their best, and I hope they're willing to listen to a little constructive criticism!