Full disclosure - Magic has been far from the top of my mind these past few days and weeks. As Commander Legends previews have flowed out into the world, we in the United States are also focused on a little thing called The Most Important Presidential Election of Our Lifetimes. That's true for me more than most because I happen to be working an election-related job this year. But I've been trying to keep up as best I can with spoiler season, and...

Commander Legends sure is a thing that's happening, isn't it? Let's dive in.

We always knew this would be a set filled with reprints of Commander favorites. That's a good thing straight away. We also hoped these reprints would include cards that had grown ever more expensive, giving players a new chance to get their hands on them without breaking the bank. In that regard, Commander Legends has delivered a handful of home runs. 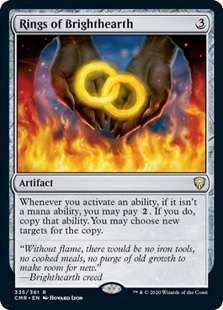 Let's begin with one of the cards we debuted exclusively on CoolStuffInc last week. Rings of Brighthearth, seen only once in Lorwyn and then never again, was near the top of many players' reprint wish lists, including mine. I'll reiterate how stoked I am to have it in this set, and to finally be able to afford a copy or two myself.

That's not the only Yahtzee of a reprint we're getting. Mana Drain, Scroll Rack, and Vampiric Tutor are among the most highly sought-after Commander cards that many players simply can't afford. As with all reprint-heavy sets, secondary market prices on these should come way down in the weeks immediately before and after the set's release before beginning a slow, inexorable march back upward. Grab them while you can.

I also highlighted Command Beacon because - believe it or not - it's a $30 card. That is nuts. This is a card that can go in any Commander deck, providing a helpful but by no means overpowered effect, especially given another card in this set we'll discuss later. I don't know why it hasn't been reprinted in every Commander precon. I don't know why it wasn't in Brawl decks. (Something about Hasbro profits, I'm sure.) But it's here now, and hopefully many more times to come.

Of course, each of us can think of dozens if not hundreds of expensive cards we'd have loved to see in Commander Legends that didn't make the cut. The medallion cycle immediately springs to mind for me.

These also fall into the "why the heck haven't these been reprinted into the ground by now" category. When I got into Magic almost five years ago, these were $5-$7 cards. Now they're in the $20 neighborhood. Unlike Command Beacon I don't think these necessarily go in any deck, but certainly plenty of decks employ cost-reduction synergies that cry out for the medallions. Next time, maybe.

I applaud Wizards of the Coast for trying new things (when they aren't naked, shameless money grabs; looking at you, Secret Lair). I admit I was intrigued to hear that Commander Legends would be a set that's meant to be drafted. As we've learned more about what that draft process looks like and seen the cards revealed... I'm not sold. Nowhere near it.

First, the ongoing elephant in the room - we can't draft right now. The COVID-19 pandemic is as bad as it's ever been in the United States, certainly, and remains bad in places around the world. Many thousands of Magic players can't - and certainly shouldn't - gather for close quarters activities right now, and they most certainly shouldn't be handing pieces of cardboard to one another.

So, what's left, then, is an overstuffed Standard-esque set filled with unremarkable chaff that we'll tuck away in boxes never to be played again. Chaff is the cost of doing business as a Magic player, I get that, but I can't help but wonder what this set would have looked like had it not been designed with Limited in mind.

On top of that, the way Wizards wants us to draft this set frankly doesn't appeal to me at all. I've never been a big Limited fan, though I know a great many players are and I hope they find a lot of fun in this. It's just not for me.

What were they thinking with some of these cards?

Hullbreacher should be a White card. It just should. Maybe it could also be Red. But Blue already has Notion Thief, et al and I could have sworn Wizards promised us powerful new White cards in this set. Total whiff.

Reshape the Earth is a mistake. Don't tell me "but it's expensive" - this is Green, someone will find a way to cast it on turn three before the end of the year. Don't tell me "but it could have been worse"- sure, it could have gotten EVERY LAND IN YOUR DECK. In a format where Landfall is an eternally popular deck archetype and coming immediately on the heels of a lands-focused Standard set in Zendikar Rising... why would they think this is a good idea?

I lashed out on Twitter the moment this was spoiled. I said I hated this card and everything it stood for. I said it validated my long history of begging Wizards not to design for Commander.

I've calmed down quite a bit since then. But my concerns remain.

My worry isn't so much about the card itself. Many people pointed out to me that as a planeswalker, it's unlikely to stick around long enough to use its ultimate ability, and they're right. People also said the salt that would come from having that ult go off would make the Tevesh player the table's target, and they're right, too.

It's more about what this card represents. Stealing opponents' stuff is part of Magic, I do get that. For me - and for a lot of players - stealing commanders is an entirely different thing. It's one thing to have your commander removed - just pay the tax and cast it again. Having it taken away from you, however, feels so much worse, especially if you don't have a way to prevent it or easily get it back. Having every commander stolen doesn't sound like my idea of a fun time in a social format.

This, of course, begs the question - who did think it sounded like fun? Well, Wizards did, of course. And herein lies the heart of my concern. Wizards clearly intends to treat Commander like any other format. Since every other format prioritizes winning above all else, Wizards is printing cards that push the power level of the format ever upward and/or signal to players that they should want cards that make them win faster, easier or more consistently.

I've said this before and I'll say it again. Wizards, don't tell us what we want. Listen to us when we tell you what we want. Example - pretty sure absolutely no one asked for this card:

First, I've never been a fan of Cascade at all, especially in a social format. So already I'm out.

Not only does this card have Cascade, it gives Cascade to all your expensive spells. In Simic.

Or whatever the hell this is:

There are so many other examples I could cite from this set, and that all underscores my overriding fear about Commander Legends. By making this set "for us" Wizards has exerted pressure on players to play Commander a certain way. And sure, we can just choose not to play the cards - I don't see an Imoti Cascade deck in my future - but plenty of people will. And why wouldn't they use the tools available to them? I can't fault people for thinking these cards are fun and wanting to play with them.

The problem comes when players sleeve up these decks and these cards and run over a table that was simply looking for a good time. Even if they didn't mean to run the table over, it's going to happen. It'll cause bad feelings. It might ruin someone's day.

That's the problem. It's been the problem all along with the Year of Commander. Wizards wants us to play Commander like we play Standard and Modern and Pioneer. Many if not most of us don't want that.

Be clear, I'm not putting on a sandwich sign saying "THE END IS NIGH" or anything. But this yet another data point in the trend toward Wizards using the power of its printing presses to alter the very DNA of Commander. I don't like it. Commander remains the best Magic format by far and will only get more popular with the release of Commander Legends. There are, however, dark clouds on the horizon. We'll deal with them another day.

For now, though, imma get me a dozen Rings of Brighthearth while the gettin' is good.