Iâve got a Commander preview card for you today. I imagine that there will be a majority of you who will skim down to the preview card. I get it; I do it, too. If you want to go down and take a look at the card, I canât stop you. However, if you want to play along for a few minutes, letâs have some fun. Donât worry, this wonât be one of those cards that light up Legacy that you need to hurry up and preorder before it shoots up to $20.

What Iâve got for you today is not for Spikes. Timmies might like this card, but it clearly fits into the Johnny design mold. In fact, this card does something that almost no other card has done before. But, you have to understand its roots from existing Johnny cards to show you how far this has come.

Letâs take a trip back through time. Yes, I may be going all Michael J. Flores on you for a few minutes.

This was the first card that exiled cards from your library. The âbonusâ of casting this was twofold. First, you got the slowtrip (drawing a card at the beginning of your next upkeep), which Iâm sure made anyone excited. âI get to draw an extra card on my next turn? What a game we play!â This of course was trumped by the cantripping Manipulate Fate in Invasion; if you want to make the argument that Manipulate Fate was strictly better, you can do that on your own time.

But surely the benefit of this card wasnât just to make you jump through hoops to draw a card. Both of these cards made use of statistics. If there were cards in your deck that were going to be âdead drawsâ (cards that would have no effect on the opponent because they were specialized removal or the like), this pair of cards could exile them from your library to give you better odds of drawing a card that you would need in this game. The fewer cards there are in your library, the more likely youâll draw a business spell. Itâs just math.

Neither of these cards were too heavily played in constructed tournaments, though they did blaze the path for the upcoming cards.

Now, this is a real Johnny card.

Much like its Worldwake brother, Selective Memory, Mana Severance doesnât target you. Thereâs no way you can use this to target an opponent, which is what most people were thinking when they first read this card. Alas, it removes your lands from your library. Why would anyone want to do that?

Sure, it improved your draws so you were drawing fewer lands later in the game and more spells, but it just didnât see any serious play. The card doesnât affect the board at all, but only what you might be drawing in future turns. It seems horrible as a turn-two play, and there would be other cards youâd want to cast later in the game than Mana Severance, so this card was left off deck lists.

That is, until this baby came around:

It was a fun combo deck in Extended when Tinker was still legal at the time of Mirrodinâs release. While there were plenty of awesome artifacts that players wanted to Tinker up into play, the Charbelcher/Mana Severance combo would outright win games. Some were even saying that if Tinker didnât get banned, that could have been tuned to be one of the more format-defining decks.

Of course, Tinker was banned (along with Oath of Druids, because both of them would be used to get the unrevealed Darksteel Colossus coming up in the next set), and Mana Severance once again was relegated to the junk rare bins. But there was another card in Mirrodin that paved the way for our new Commander card.

This was the first card that actually exiled selected cards from your library that did something besides just improve draws. The more artifacts you removed, the more 1/1 Myr tokens you got. The cost of a 1/1 Myr was an artifact from your library that you were never going to play. Was it worth the cost? This was a cute card and made use of an entirely new resource.

A timely Rain of Blades or Earthquake for 1 suddenly ruins your whole play. Just like most combo cards, it put the game into a win-or-die mode that you had to protect. But you would know when to crack it to get the maximum effect.

All of these cards have been the ancestors of todayâs Commander card: 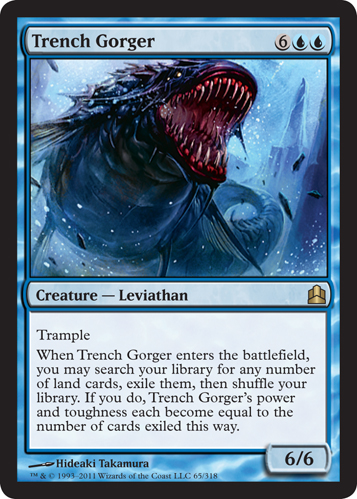 I love this name, and from what Iâve seen of Commander, there are plenty of cards that have pretty awesome names. And if I was going to have someone alter this art, it would clearly be the scene from The Empire Strikes Back where the Space Wurm is coming out of the asteroid trying to eat the Millennium Falcon. Once you see it, you canât unsee it.

Iâm not going all Evan Erwin and telling you that this card will break the format. Clearly, thereâs a majority of players who wonât think twice about this card. But for you select few who want to see what we can do with it, letâs have some fun.

Thereâs the obvious problem/drawback/awesome benefit of exiling land cards from your library. This was smartly designed so that you donât have to do it each time it enters the battlefield. If you do decide to exile lands, it doesnât get a power/toughness boost; its power and toughness become the number of lands you exile. Donât think if you exile one land, it will become a 7/7, because it wonât; youâll have a 1/1 trampling Leviathan instead.

If someone kills or bounces or blinks your Trench Gorger, you can still have it come back into play as a 6/6 trampling creature. The exile effect is not mandatory. If you want, you could also use it as a shuffler by âfailingâ to find any lands and just shuffling your library. Youâll just get a 0/0 for 8 mana.

But letâs say you do exile lands. What do you have, besides a really big fish?

Going the Mana Severance route, you can exile all your lands and plug in Goblin Charbelcher (it only says Mountain, and there are no Red mana symbols on the card at all, so itâs safe to play in a deck of any color). Then, you can constantly do damage to a creature/player equal to the number of cards you have left in your library. Unwinding Clock and artifact mana means game over most times. At the beginning of your opponentâs upkeep, untap all artifacts, then Goblin Charbelcher that player for 40+ damage. Repeat for the next opponent.

Now for a quick Vorthos Monday. Luckily, there is already a Commander who I want to use with this new card:

Iâm creating a fun Commander deck called âThe Revenge of IvarsââIvars being a popular seafood restaurant chain here in Seattle thatâs known for its clam chowder. The deck will be filled with Leviathans, and Octopuses, and Fish, and quite possibly a clam or two.

All helped with this card:

But this Leviathan has something in common with older Leviathans in the past: They have to deal with sacrificing lands to get the benefit of their large size. With Trench Gorger, itâs âsacrificingâ the lands that havenât even come into play yet. By having to sacrifice so many lands, you will want to keep extra lands available, which is something you canât do if you donât draw any more lands. And for this, I would recommend Crucible of Worlds.

But of course, any Commander deck would benefit from it.

As I said before, this card isnât everyoneâs cup of tea. But at 8 mana, this is clearly a better mana curve for the point in the game where youâll want to remove all those âOh, I drew another landâ problems that we tend to have from time to time. Some people will really like this card; others will simply trade it away.

If you run into me, Iâll happily take your Trench Gorgers.

Just a small note: Iâm no longer going to be on Mondays. Yes, this is the only time youâll get Vorthos Monday from me. Iâll now be published on Thursdays. Not this Thursday, but starting with the next one. Right before the Commander release. Until then, you can still find me on Twitter (@MTGColorPie), and my two blogs MTGColorPie.com and 99edhproblems.com.

Iâll see you in a week and a half.