Bruce Richard, writer of Serious Fun and longtime Gathering Magic contributor, challenged chef Ant Tessitore to a flavorful duel. Our Chairman chose one of the most otherworldly options to truly test whose deck-building cuisine could reign supreme:

I can't even tell you how odd this week's @IronrootChef secret ingredient is - Void Winnower from #MTGBFZ! Good luck @manaburned & @AntMTG!

Will the Eldrazi eat the potential away from our challenger and chef? Itâs time to find out on this weekâs Ironroot Chef! 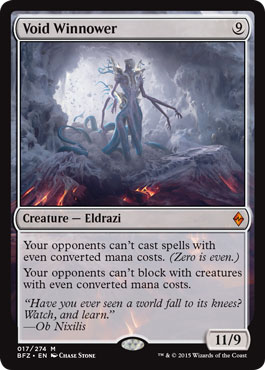 After reading Void Winnower, I knew right off my theme deck needed to be odd. I started looking for cards that referenced âoddâ in the name or flavor text, and then I started thinking of all the great puns I could come up with when describing the deckâ.â.â.â

And then I woke up from your nightmare and looked at the entire card. My favorite part of the card was the quote from Ob Nixilis, âHave you ever seen a world fall to its knees? Watch, and learn.â In fact, Ob, I have! The flavor text got me thinking about the troubles Magic has seen in Dominaria, Zendikar, Mirrodin, and Mercadia. I jumped to a theme deck that only uses cards that reference destruction on a worldwide scale in the flavor text. The building started from there.

Initially, I imagined an Ob Nixilis Commander deck, but it became obvious that I would be stretching my theme in the preposterous. Instead, I let the cards start building the deck for me. The deck is primarily black, with significant red and white splashes. Including every version of the quote provider, Ob Nixilis, was a requirement. Ob Nixilisâs cards donât offer flavor text, but since he provides the inspiration, heâs in! Other than Ob and the lands, every card in the deck includes world-ending flavor text. Even Volrath's Stronghold and Urborg, Tomb of Yawgmoth reference the end of days! I chose the basic lands that looked the most like lands that had been completely decimated.

1 Pestilence Demon (Rise of the Eldrazi)

1 Pathrazer of Ulamog (Rise of the Eldrazi)

1 Consume the Meek (Rise of the Eldrazi)

I loved the opportunity Void Winnower has provided. The inspiration for the deck fits perfectly with the other cards. I enjoyed the chance to put together this deck and include creatures from Magicâs original set, right up to the latest set, as well as so many cards in between. It also opened up the flavor of so many cards I had used in the past but never considered much past their practical utility in a game. I hope you find the flavor as tasty as I have!

The Eldrazi: an ancient and unfathomable race of word-devouring monstrosities, able to traverse the Blind Eternities as they seek out new worlds to consume. Since their inception during the original Zendikar block, the Eldrazi have gone on to be considered one of the âbig badsâ of Magic. Alongside such destructive forces as Phyrexia and Nicol Bolas himself, the Eldrazi are considered equally dangerous, and they are equally feared. In order to capture their status as one of Magicâs primary villains, I thought it would only be fitting to construct a deck which would allow them to be the archenemy they are. 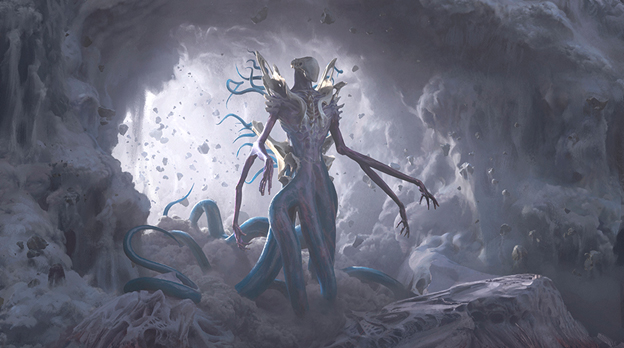 If you are not familiar with the Archenemy format, click here. What I am presenting you with today are two flavor-filled decklists: an Eldrazi-themed, sixty-card Constructed deck paired with a side of twenty Archenemy scheme cards that were hand-picked by the chef himself to perfectly align with Eldrazi flavors.

The deck itself has a strong Eldrazi theme with a focus on creating effects on the battlefield that will startle and confound your opponents. Four copies of the secret ingredient was a must, as the card perfectly captures the Eldraziâs ability to warp a battlefield as it sees fit. Some other flavorful notes include three copies of Titanâs Presence, as there are only three known Eldrazi titans (one of each is lurking in the deck). A single Perilous Vault offers a reminder that, while it has been proven the Eldrazi can be contained, Planeswalkers should also remember that it was also proven that nothing can hold their power forever. 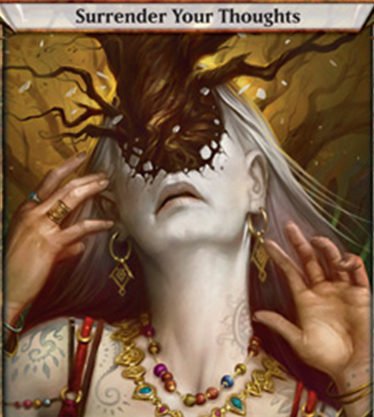 With this deck, you will embody the unfathomable Eldrazi as you shatter the minds and worlds of your opponents. Watch as every hope vanishes from your opponent's eyes as you force him or her to surrender his or her thoughts. Laugh as you thrice seal your opponentsâ fates as you call forth each of the three legendary titans. Though slow to start, in good time, your deck will summon beings your opponents puny minds cannot begin to fathom as you cause the very soil to shake and collapse the very foundations of civilization.

{six different polls, each with an end date of midnight 6/25}

This week, two titans of flavor square off in a savory slugfest of Magic's biggest, scariest monsters. I am surprised and somewhat disappointed that the oddly themed numbers on Void Winnower weren't tackled head on by a plucky chef. Perhaps it was too tall an order for even the skyscraping Eldrazi to handle. However, our chefs are resourceful and observant, and the themes they present today are clever, fun, and tasty as hell.

You picked a neat theme. While the flavor text did not leap out to me as the most interesting flavor on Void Winnower, you won me over by fully committing to it and building strong parallels between the Eldrazi and countless other doomsday scenarios from Magic's past. Honing in on flavor text gives your deck great attention to detail, and the greater theme of worlds ending ties it all together with a broad perspective that suits the Eldrazi quite well. Nice job finding ingredients from different erasâthat's always satisfying. Who knew Yotian Soldier's flavor text was so ominous? We know now.

I wanted more boldness. You picked a theme, stuck to it, and didn't stray. Feels a little safe. Void Winnower has a golden opportunity to go off the rails a little bit with its bizarre numerical flavor. I was disappointed that that couldn't also be incorporated into the deck. There're sixty cards in a deck. There's room to explore there.

Your opponent focused on flavor text! Thatâs a bold play, to try to top the flavor-text king at his own game. How does that make you feel? Angry? Perhaps you have a new archenemy!

I have to remove my own bias from this judgmentâI personally love the Archenemy format, particularly the flavor of the scheme cards. If the chairman's heart was voting, your score would be auto-3s. But I must remain impartial.

Like Bruce, you focused your deck more on the general menace of the Eldrazi than Void Winnower's unique properties. Archenemy is an under-utilized goldmine for expressing that. Props to you for dusting it off and showing the people what they've been missing. It's a very creative jumping-off point that serves Eldrazi flavor quite well.

Like Bruce, you also seemed to pick a theme and stick to it without giving us the unexpected twist I look for to award 3 points for boldness. Because Void Winnower provides a golden opportunity for that, I'm leaving this meal wondering what could have been.

How odd. The most obvious path to inducing flavorâthe source of endless âI canât even!â deadpans for years to comeâwas eschewed for a more obtuse end: the literal one for so many of Magicâs locations.

I love that you looked for illustrate what the Eldrazi truly are, calling upon the myriad ways the end of days was shared in flavor and spirit. But thatâs all we saw. You created a very solid dish, but it lacked a final kick of spice to hook me. Iâm not unhappy enjoying what you made, but I would look to try something else next time.

For handling a true oddity of Magic with flavorful finesse, but leaving out that little something extra, my score is a solid one:

Archenemy is a format thatâs much maligned in multiplayer circles. Unlike Planechase, where every player stands alone in the midst of wild effects from planes, Archenemy is a team format where one overwhelming powerful force with effects beyond normal Magic are called upon.

Brilliant way to fire the flavor for a two-deck combo, though I fear it became a touch overdone by the end. Including the Eldrazi titans and evoking their command of destruction is befitting for the archenemy, but chaining together the coordinating deck began to feel like more of the same. It would have been great to see some of the otherworldliness of Void Winnower shine through the dominating shadow the titans cast over it all.

Your score this week reflects the bold initiative of finding the right deck format and thematic cards to follow through, but missing the mark on making Void Winnower a bigger piece of the puzzle.

Voting closes midnight Thursday, and the first winner will be announced Friday (9/18/2015). Follow @IronrootChef on Twitter for the final score, and be sure to share your ideas for secret ingredients: Our chairman Nate will continue to use your ideas to challenge our chefs to the core.

If you think you have what it takes to challenge the chefs, send an email to IronrootChef AT gmail DOT com with all of your flavorful qualifications.

And donât forget to tune in to all the Ironroot Chef action happening at the Community Cup this weekend!