Weâre all searching for something. Every day, weâre in the process of moving toward what we want, often slowly with just a whisper of a thought. But now and again, we take a leap forward, demarking a measurable gain on our end goal.

When we finally clear the last hurdle, itâs a moment of payoff a lifetime in the making.

Quests were an alluring affair from Zendikar, and our return with Battle for Zendikar reminds us past quests matter, too. This weekâs challenger hails as one of the two that completed the quest of The Great Designer Search, winning its second tour in 2010 and securing a dream job as a designer for Magic. With a background filled with creative knowledge and knowhow, it was his work laying down some of the creative foundation for Theros block that earned his place at Wizards of the Coast.

With a chance at Ironroot Chef glory, he went straight to the top chef to take on:

What flavorful and rich ingredient could Chairman Holt come up with?

For this week's @IronrootChef, the secret ingredient is a blast from Zendikar past...Quest for the Holy Relic! pic.twitter.com/MkTyrFgmxP

A literal quest for a literal holy grail is what Challenger Fleischer had already accomplished. Can he do it again?

Whose deck-building cuisine will reign supreme?

This is Battle Quest for the Holy Relic.

I was happy to receive the special ingredient from The Wizard last week. Quest for the Holy Relic formed the basis of one of my favorite Standard decks. I enjoyed using Glint Hawks to bounce Ornithopters to trigger the Quest multiple times, finding Argentum Armor. But The Wizard had given me the task of building a flavorful deck, so it was time to get medieval on his assignment.

The title of the card suggests an Arthurian grail-quest: noble knights, searching for the chalice once held by the one they hold most holyâor perhaps a pilgrimage. Pilgrims would go on long journeys to see relics. 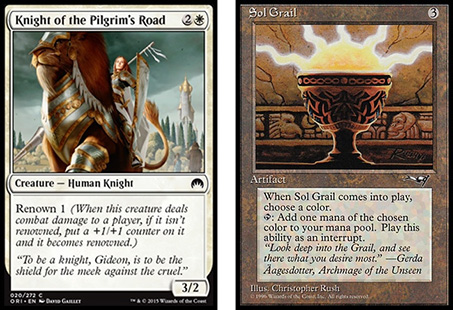 Of course, the most traditional definition of the word relic refers to the veneration of saintsâ bones, the hand of a warrior, the skull of a philosopher, the foot of a pilgrim. 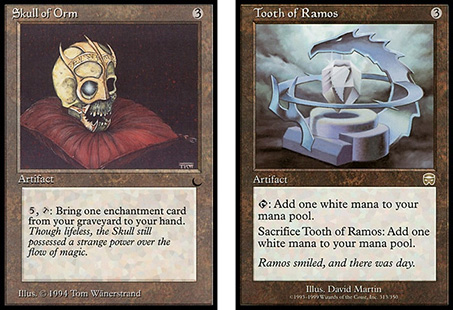 In a pinch, any object held or worn by the martyred saint will do: Urza's Miter, Akromaâs sword, Elspethâs spear. These are our Heroes Remembered.

This led me to a theme, both creative and mechanical, or martyrdom, to provide some contrast to the main story of ancient artifacts uncovered. How are relics made, but by the death of saints? And how are saints made, but by suffering and sacrifice? Asmira is here, inspired (or incensed?) by the deaths of the faithful. Martyr's Bond ensures that both sides are fully committed to their respective causes. And a relic of the chief deity of Innistradâs church, Avacyn's Collar, ensures that the deaths of her favorite worshippers will not go unremembered.

Avacynâs presence is felt here more than most. The objects touched by her angelic form, her priests, and her worshippers; theyâre all here.

I struggled a bit to find the right format for my deck. Legacy finally won out. It would allow me to focus on the special ingredient, which really wants to be a four-of, while giving me access to all the flavorful cards needed to support it. Most of the other cards are singletons, so I could cram in as many different cards as possible. A few flavorful lands supplement a normal Legacy mana base, and especially narrow or situational cards were relegated to the sideboard.

This is the story of Ayenti, a Relic Seeker hailing from a long-forgotten plane. Visited one night by a vision, Ayenti would embark on a quest to find a powerful holy relic. His journey would take him to an Ancient Tomb, buried beneath a Deserted Temple of some forgotten god. Within this eldritch tomb, Ayenti would find not a holy relic, but a binding blade of considerable and sinister power. Like a puppet dancing on demonic strings, Ayenti would take up that dagger and slay the first innocent life to cross his path, unlocking an ancient seal protecting his world from destruction.

Cursed by the gods for his foolishness, he was forced to take on the form of a hideous purple hippo. Ayenti would struggle to find a way to not only restore himself, but prevent the evil he had released from devastating the world.

Ayenti would encounter a powerful Seer wandering the unknown wilds, a man who would recognize Ayenti for what he truly was: someone seeking a way to right his past wrongs. The seer would tell Ayenti three parables about three sister goddesses and set him on three separate quests to find a holy relic belonging to each goddess. Only by combining the might of each would Ayenti have any hope of stopping the Demon. 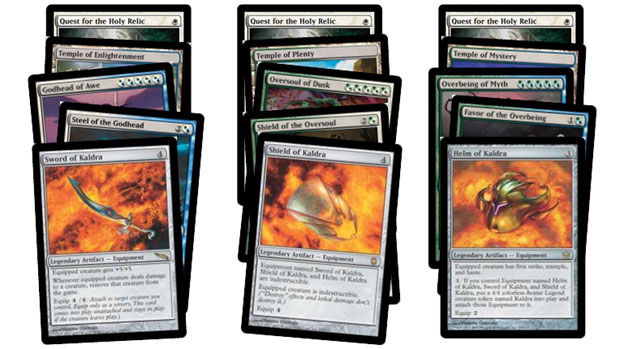 Ayenti would travel across the world, visiting three temples, each erected in honor of a goddess. He would prove himself against the champions of each and ultimately uncover the prize they protected: a holy sword, an indestructible shield, and a powerful helm. When combined, the artifacts would summon an immense avatar of justice, one capable of wielding the weapons against the risen demon. With the combined might of the goddessesâ weapons and their blessings, Ayenti was able to slay the demon, break his curse, and restore peace to the world once more. 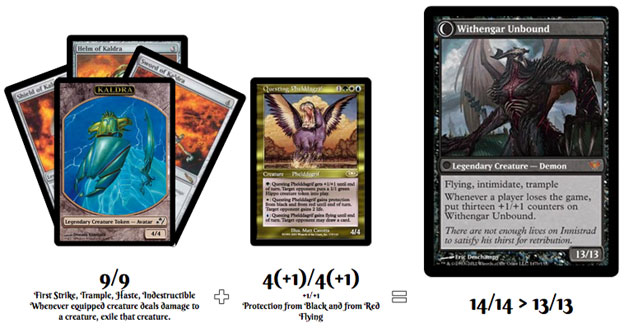 Ayentiâs Quest for the Sword

Ayentiâs Quest for the Shield

Ayentiâs Quest for the Helm

Every chef needs that extra-special personal garnish: that ingredient that defines a dish as being his or hers. I included a single Springleaf Drum as an homage to my absolute favorite drummer of all time, Ahmir Khalib Thompson, a.k.a. ?uestlove, whose name ties in nicely with our âquestâ theme.

Below, you can read the judgesâ scoring to see how Nate and Stybs cast their ballots. However, this is your chance to score the winner of Battle Quest for the Holy Relic.

What a battle! It seems we here at IRC have succeeded in our quest to bring flavor to the people.

This deck is covered in years of dust, but it is tasty nonetheless, and I'm glad we all discovered it, buried deep in the recesses of your imagination. I love the focus on sainthood, martyrdom, and the original definition of relic: the bones of dead saints. Very creative. You found some real gems from Magic's past to bring this story to life. Some of these cards are so old they could be considered cardboard relics themselves.

For such strong and creative themes to build upon, I feel that your execution crumbled a bit, like a relic returning to dust in the palms of my hands, its beauty fleeting. I wanted more. If Asmira is your hero (excellent choice, the halo in her art is a great Easter egg), what, specifically, is her quest? There're a bunch of relics here. Is one of them "the" holy relicâthe object of her quest? It's unclear. The deck feels more like a museum than a quest.

Holy moly, you hit that ball into the parking lot. I'm really tired of IRCs beating challengers. Maybe you should retire or something. Ethan's deck is great, but this is just unfair. What a masterpiece.

At first, I was a little disappointed that you didn't choose a single relic, much like Ethan. Quest for the Holy Relic seems perfect for a Joseph Cambellâesque linear monomyth, and "artifact soup" wasn't gonna cut it for me. But as I read on, your story jumped to life, each artifact having crucial importance to Ayenti's journey. It clicks. It's intuitive. It takes Kaldra's relics, which have a built-in story of their own, and builds a world around them that's so much more than the sum of its parts.

You also went deep, earning big points for boldnessâthe choice to have included a prologue quest, the unbinding of Withengar, the twist out of left field to be cursed and transformed into a Phelddagrif, and that damn drum. A nod to ?uestlove that hammers upon my roots here in Philadelphia? You've gotten too good at buttering me up. Even without that hint of personal bias, the thoroughness of your story is rich with bold flavor.

We need to start thinking about your weaknesses when issuing main ingredients. I'm sick of watching great chefs get in the ring with you and come up short.

I often want to see incredible flavor called up for open-ended cards. You didnât disappoint me here Ethan. I agree: Quest for the Holy Relic needs to be a four-of, but where it goes from there should cover the breadth of Magicâs holy relics.

I loved the dive into the ways holiness and the figures that represent it have appeared in Magic. Pulling together their artifactsâand not necessarily the holy figures themselvesâfelt like a tour de force of flavors without any one outshining the search itself.

While at a glance your deck may appear elementary, your choices were clearly intentional beyond the pithy description you were allowed. My score for you represents your skill in bringing the flavor of Quest for the Holy Relic to its full potential while balancing the rest of the ingredients to just complement the secret ingredient.

Chef Ant, weâve been here before. Youâve taken a card and crafted a cleverly capable story around the cards you added to it, culminating in a wonderfully tight tale down to the very last card.

Iâm not buying what youâre selling this time.

I admit, as Chairman Holt attested to with his score, your story is interesting and fun. But there are too many pieces competing, and the center of your story isnât the quest, but the transformational journey of Relic Seeker. Relic Seeker didnât even take most of the quests in your storyâitâs a âcursedâ purple Hippo instead.

Did these quests start on Mirrodin, where Kaldra existed? Where they on Shadowmoor, where avatars of ideals (not Gods) lived? The Temples you included feel right, but they were a tribute to the Gods of Theros.

While your pieces puzzle together cohesively, itâs only based on your narrative description: convenient, but not as compelling for me as what your competitorâs careful construction without a forced story provided.

My score for you reflects your (as always) strong delivery, but it demerits you for not exploring what more universal cards could have provided:

Voting closes midnight Thursday, and the first winner will be announced Friday (10/9/2015). Follow @IronrootChef on Twitter for the final score and victory announcement and to share your ideas for secret ingredients. Chairman Holt will continue to use your suggestions to challenge our chefs to the core.

And if you think you have what it takes to challenge the chefs, send an email to IronrootChef AT gmail DOT com with all of your flavorful qualifications. Weâre looking for new Ironroot Chefs and competitors, and you could be the next to take a shot at impressing the judges.