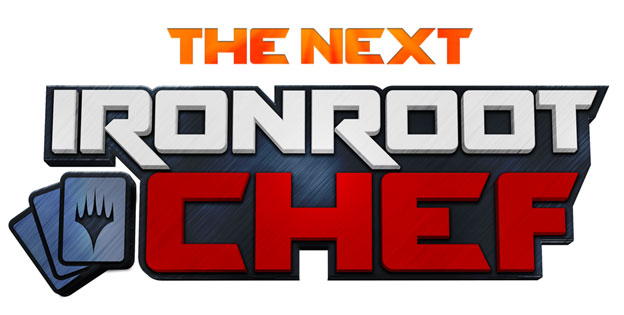 Commander (2015 Edition) is upon us, and it couldnât be a better time for flavor. With throwbacks to old characters and stories, Commander releases have become annual adventures into Magic creative.

Itâs almost painful to wait until this Fridayâs release, which is exactly why our chairman, Nate Holt, chose an indelible delight to unleash upon our next two Ironroon Chefâtoâbe contenders.

We're looking for The Next Ironroot Chef! This week's hopefuls will build with a CMDR classic: Nin, the Pain Artist! pic.twitter.com/0HTBlVOJ2G

This week features the other half of our entrants into the Next Ironroot Chef showdowns. Matthew Nielsen is a longtime student whoâs studied Magic since Mercadian Masques. Russel Lee edged out competitor Nielsen by following the game since Urzaâs Saga, challenging himself to go wild with the craziest cards in the game.

Can either stand up to the pinch of plotting down flavor?

Whose cuisine can be supreme first? This is The Next Ironroot Chef: Battle Nin, the Pain Artist!

Ninâs Ink: Finest tattoos, piercings, and body modification in the Multiverse
From basic branding to intricate Ravnican magemarks (our specialty) to exotic ancient Tarkiran and Theroan designs, if you want a personal look that will last even longer than the memory of the pain, visit to Ninâs Ink.

When you come, Ninâs various assistants, all well qualified and enthusiastic, will help you prepare for your experience, but rest assured the work itself will be done only by the Pain Artist herself.

Although Nin performs most of her work with the traditional needle, other instruments are available for more specialized operations, and her operating theater is state of the art. As Nin is a pain artist, numbing doses are unavailable; however, for weaker customers, secure restraints can be provided.

If youâre still uncertain, listen to some of Ninâs satisfied customers:

âWhen Griselbrand contracted Nin for my Infernal Scarring, I was skeptical at first. Shouldnât a demon make its own scars? Now, though, Iâm glad I listened. You can really tell the care she puts into each cut, how much she enjoys the process. Iâve had her touch up the other threeâs scars, too, âcauseâdonât tell them thisâbut demons have no sense of style. Nin, though, sheâs a real artist.â

âWhen I was cursed and turned into Phage, it really messed up my tribeâs facial tattoos, but no one dare come close enough to fix them. Thank Urza for Nin. She wouldnât let a little chance of death stand between her and painâahemâI mean, her craft.â

â Hurloon Minotaur, as the rest of the tribe nods in unison

Stop by the Rakdos Carnarium for a public demonstration, and then make an appointment at our main branch location near the Rakdos guildhouse (theyâre our best customers, after all). Multiple locations and entrances from the undercity are also available for customers who need special discretion.

Little is known about Nin, the Pain Artist save that she was found broken and scarred in the lair of unspeakable atrocities. Rescued from what would have certainly been a slow and torturous death, no one suspected that Nin harbored a terrible secret. The young woman that she was before was gone, and in her stead was the ancient artificer once known as Ashnod.

Thought dead at the hands of Gix, Ashnod escaped death by transferring her consciousness to another vessel using a rudimentary Mindslaver of her own device. Later, adapting mind-shifting techniques (Thalakos Deceiver, Soul Seizer/Ghastly Possession), Ashnod has been able to live for millennia, attempting to slake her Thirst for Knowledge.

Some of her favorite tools remain the sameâ.â.â.â 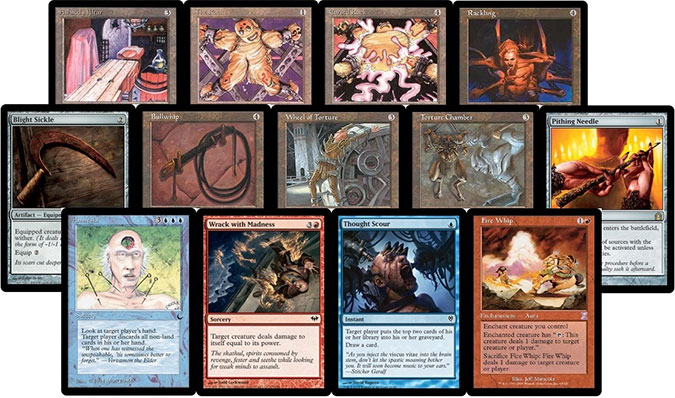 â.â.â.âwhile others have evolved over ages of Compulsive Research: 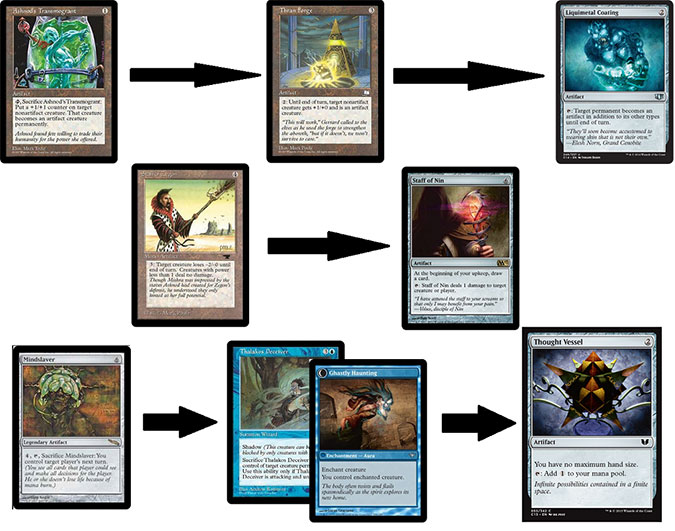 Though preferring to work alone, she often enlists minions to assist her in menial tasks such as subject procurement (Willbender, Beguiller of Wills) and bone-breaking (Bonebreaker Giant, Oracle of Bones, Whipkeeper). She has gained potent magic over the ages, but much of it is twisted by her studies, rendering her able to turn Bone to Ash, cause a Suffocating Blast, and even cause Dream Fractures.

Ashnod remains a master artificer, bending metal and sinew to her very whims. Whether Reshaping, Transmuting Artifacts, or simply destroying defective work with a Shattering Pulse, she displays an utter Metal Mastery. Often, she tries her devices out on her favorite Stuffy Doll, seeking perfection before putting them through their paces.

She is fond of mementos, keeping a Jar of Eyeballs next to her workspace, along with other bric-a-brac she has accumulated through the years and planes. While not a Planeswalker herself, a Planeswalkerâs (Venserâs) Journal is among her prized possessions. Ashnod has also been to myriad planes in her long life, often favoring towers (Command Tower, Desolate Lighthouse, Arcane Lighthouse, Reliquary Tower), ruins (Academy Ruins, Buried Ruin, Kher Keep), and locales strong in blue and red mana. She has preyed on the naivetÃ© (Chandra), curiosity (Tamiyo), or outright greed (Dack) of a Planeswalker to visit other planes, discarding entire lives behind her in search of new ways to wrench the secrets out of the very marrow of her subjects.

Another reason she scours the planes is the loss of Tawnos, perhaps the only living being she cared about. He lives on as a Solemn Simulacrum, tended by Diaochan, Artful Beauty, only recently freed from her Biting Tether in the inevitability of Ashnod-now-Ninâs predations call for vengeance, leaving behind another meek girl, tortured by a ruthless monster.

Below, you can read the judgesâ scoring to see how Nate and Stybs cast their ballots. However, this is your chance to score the winner of Battle Nin, the Pain Artist.

I read your decklist and smiled ear to ear. I pictured all the cards in my head. I knew exactly what you were going for. So when I read your descriptionâNin's InkâI pumped my fist. Well done. When the flavor of a decklist leaps off the page without even needing an explanation, you know you have a handle on serious flavor. I'm not talking about just card names either. The artwork on Vedalken Anatomist, the face tattoos on Phage and Hurloon Minotaurâ.â.â.âthis was a well-illustrated theme.

You chose a strong interpretation and went all-in on that direction. It's funny, but also pretty cool. I never thought of Nin as a tattoo artist, butâ.â.â.âof course she is. And it's amazing how much support for that theme you found in cards old and new. I hope to never have a Bloodletter Quill scratch across my skin. But it needs to happen; I hope it's Nin who does it!

The other side of this coin is that the deck comes across as a hodgepodge of stuff. I get it. It's all part of her story. But the story is muddy to me. The events, the character relationshipsâ.â.â.âI'm not sure they come across as strongly as you had hoped. It seems a bit abstract for my taste. And "hodgepodge" isn't a strong central theme.

Tattoos have been symbols of taboo and power for thousands of years. Nin, the Pain Tattoo Artist didnât have the same ring to me when I read your rundown. However, your words were more convincing.

The mix of visual elements to drive a cohesive narrative is tough when youâre reaching across Magicâs long history. Art and style and direction make plunging into flavor-by-art a tough approach. I found your thoroughness and dedication thoughtful and considerate and, most importantly, convincing for me.

I dug in to find what flaws I could, but I found myself debating semantics in a circle. For your first shot at chefdom, Iâm sincerely impressed with your efforts. Iâve only awarded one perfect score to this point, and now Iâm issuing my second:

Like competitors before you, I hold a high bar to using props for storytelling. Integrating the flavor of a card with the secret ingredient is a difficult, multi-level goal. While I appreciate the overall taste of what you prepared, I agree with Chairman Holt: Thereâs some murkiness and missing clarity of flavor to turn a fine submission into an outstanding dish.

Whether itâs more time drilling down into distilling what you really want to illustrateâensuring itâs a continuous piece of the true taste of the secret ingredientâyour score reflects the potential youâre hinting at. I expect you to truly show it next time.

Voting closes midnight Thursday, and the first winner will be announced Friday (11/13/2015). Follow @IronrootChef on Twitter for the final score and victory announcement and to share your ideas for secret ingredients. Chairman Holt will continue to use your suggestions to challenge our culinary challengers to the core.

Next week is our first elimination faceoff. Roberto Moser is looking to put his lessons to practice facing off against the fallen from this weekâs competition. Will either claim his first victory? Who can put down the biggest step forward in skill?

Follow us as the search for the next Ironroot Chef continues! 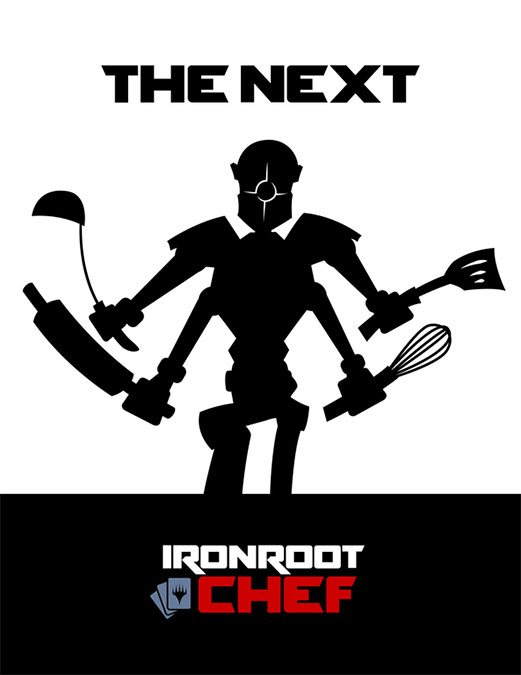