The previous nightâs revelries reverberate in your headâperhaps a bit too loudly. Knowing the day has not waited for you to begin, you drag yourself off the sleeping mat as delicately as possible. It is not delicate enough.

After a lightâand very lateâbreakfast, you decide to visit the old man. The new year is always marked by a day of rest, and there is very little that will avoid upsetting the pounding in your head. You hope the old man will be able to distract you long enough to forget it.

As you cross a courtyard along your path, you are greeted by the new year in full. The air is cool and crisp, but ripe with possibilities. Smells hint at new beginnings. Even the sky suggests a fresh start, the sun a bright yellow orb against a vivid blue canvas with no clouds in sight. You canât help shaking the thought that nature enjoys the new year as much as humans.

Eventually, your slow shamble of a walk helps you to Issar Roonâs study. With your head still in pain, you forego a knock and shove the door open with as much energy as you can muster.

No need to enter so rudely. A simple, âHello,â would suffice.

The old man continues without giving you a moment to respond.

A, âHappy New Year,â would be ideal, but I understand I must set low expectations for you. It is why I have sat here telling you tales for the past two years. You were not ready to learn what it is I truly wish to impart upon you. That time will soon come, but it is a topic better left for a day when you are feeling better.

You lean forward after sitting gently on the rug, hoping to hear the old manâs explanation, but it doesnât come. A second later, dizziness strikes, and you wish you hadnât moved.

Today shall be spent finally providing you with the ending to a tale from one of our first encounters. This addled mind seems to have forgotten to finish the account of Taysir, one of the greatest planeswalkers to ever âwalk between planes. I shall remedy that mistake now. 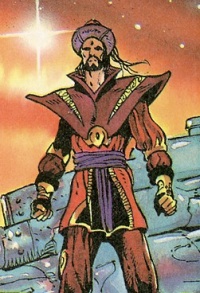 When Taysir ascended after merging with his disparate selves, he experienced what almost all planeswalkers go throughâa sudden and violent shove into the Multiverse. He hurtled through the Ã¦ther, unable to control where he was going.

His destination, however, is unimportant. What Taysir did after ascending has not been written down on any scroll, vellum, or surface I have ever seen. Even the time of his ascension has been lost, absorbed by the Ã¦ther that took him from his home plane, leaving us to guess at how many centuries or millennia passed before he arrived on Dominaria.

When Taysir finally did arrive on Dominaria, it was ill-timed. The Brothersâ War was still fresh in the minds of the planeâs inhabitants, and the Shard of the Twelve Worlds was forming. Taysir was stuck. Yet, there were numerous benefits to remaining within the Shard for so longâthe greatest of which was love. 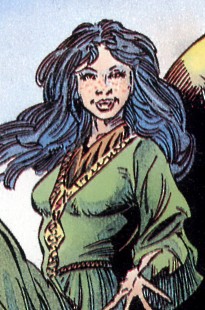 While traveling in the White Woods of Corondor, Taysir met a female planeswalker named Kristina. They began their travels together as friends and companions, but they soon became much more. The two of them fell in love, traveled the Shard, and helped to ease what suffering they could among the people they found.

Said in so few words, it sounds like a fairy-tale romance, but I cannot do it justice through mere words. Their relationship lasted for centuries. Though they overcame many trials and troubles from within and without, there was one that remained firmly wedged between the two planeswalkers: Taysir wanted to return to his home plane of Rabiah.

Thanks to Nailah, Taysir was unable to ever return, and his desire only increased with each passing year. After a few millenniaâ.â.â.

The old man changes his tone and ends his usual method of rambling at no one in particular. He addresses you directly.

Imagine putting your finger in a water pipe then waiting for a few days of rain. The pressure would be unbearable. Now, imagine doing this for a few months, or even years. Then, you will have a small understanding of how Taysir felt.

Youâre not sure about the old manâs analogy, but the renewed pounding in your head at thinking through theoretical situations certainly makes itself known.

Over the course of their relationship, Taysir and Kristina came to understand that only Kristina, from among the planeswalkers they had met, had the power to return him to Rabiah. When the Shard was broken and Taysir insisted, Kristina refused, and the wedge between them became too large to overlook. Kristina went off to travel the multiverse while Taysir remained to train the newly ascended Ravidel.

The old man stops, clearly unfinished with his narrative.

I think that is enough for today. You are not able to pay attention to my tale, and so, there is no reason I should continue. I expected better of you.

Come back when you are able to keep your wits about you, and I will finish teaching you about Taysir.

The old man turns away without acknowledgment. With nothing else to do but find a quiet corner to curl up and sleep in, you make your way out, careful to close the door as gently as possible behind you.