Itâs a fun alternative to the grind of sanctioned Constructed.

Restrictions in deck building breed creativity and innovation that are valuable skills to have for constructing decks in other formats. Depending on the format, you will get to see old archetypes or cards you might not even have known existed.

The most recent eight-man that is ongoing is âGG 8-man: Tournament of Championsâ.

To quote the person who started this:

Here's this tournament's schtick:It's an 8-man, double-elimination, bracketed by Challonge.The decks that will be played will be eight decks that won Worlds. Lists are here: http://en.wikipedia.org/wiki/Magic:_The ... ampionship . After eight people sign up, a random order will be drawn. Players will pick their decks in that order, from the past Worlds winners.

The pick order for decks broke down as follows:

For those of you who havenât encountered some of the decks covered in those various Worlds, Quasius started by picking Miharaâs Dragonstorm deck from 2006, which seems quite strong against everything since it packs four Gigadrowse main for control decks and has a pretty good game against aggressive decks.

Seraph picked Malinâs Faeries deck from 2008, which is about as good as we all remember Faeries being.

Next, Kelvandil selected Finkelâs Tinker deck from 2000, while Seeker picked Buddeâs Wildfire deck from 1999. (Both of these decks abuse the fast mana in Urzaâs block to power out huge artifact threats.)

I selected Romaoâs Psychatog deck from 2002 since I think it has a pretty good game plan against most of the decks, although quite a few matchups seem like coin flips (big-artifact mana decks in particular seem like they can just drop a huge threat on turn two if they are on the play, and Iâm on the back foot).

LSK picked Coimbraâs Naya Lightsaber deck from 2009, which is among the weaker options, but we were down to the dregs by this point.

Rylinks selected Zinkâs Mirariâs Wake deck from 2003, which is designed to beat aggro decks but not much else.

Prolepsis chose to select Matignonâs U/B (six-Jace) control deck from 2010, which seems better than both Naya and Wake by a fair amount in this metagame of degenerate decks.

The brackets of this eight-man can be found here and resulted in the initial pairings of:

My predictions for the Round 1 results were:

Psychatog versus Wildfire comes down to the die roll; Dragonstorm over Tinker; Faeries over Naya; and Matignon U/B over Wake.

I managed to take down Wildfire because I won the die roll and he flooded out in Games 1 and 3.

I think this is a flaw in his deck if we examine the decklists of Psychatog and Wildfire respectively:

Meanwhile, Psychatog is packed with nothing but card-draw, counter-magic / removal, four Psychatog, four Nightscape Familiar, and two Upheaval. If the game ever goes long, it almost certainly favors Psychatog since Wildfire will inevitably flood out on irrelevant spells, which is exactly what happened to Seeker. It is still pretty scary to play against Wildfire on the off-chance he has a really good draw, leading into a turn-one or turn-two large threat (Mishra's Helix, Covetous Dragon, and so forth).

Dragonstorm defeated Tinker in a 2â0 blowout, while Faeries beat Naya 2â1, and Wake defeated U/B in a 2â0 match.

Further details, pairings, and game logs can be found hereâit is still ongoing.

Another recent ten-man that fired (in Swiss-style brackets) was Promo-Only Magic: The Tournament.

The rules were as follows:

I managed to 4â0 with a build of Isochron Scepter / Orim's Chant as follows:

The other decks were:

An example of Elves! That I found interesting was:

The thread with all of its gory details can be found here.

Another interesting format that Benjamin âPumbles Mumblesâ Peebles-Mundy came up with was Terrible constructed; the tournament rules were:

Build a normal 60+15 card constructed deck from the pool of cards rated 2 stars or less by the Gatherer community! Ante and dexterity cards are banned.Tournament FormatThis will be a double-elim 8-man, as seeded by random.org and bracketed by challonge.com.

Oracle wording will be used for all cards.

You are expected to play on MWS, but if you and your opponent want to play on another client that is fine.

Matches are expected to finish within a week.

Once 8 people are /in, you have a week to build your deck and PM it to me.

I managed to lose to the Pumbles Mumbles himself once in the first bracket, and then a second time in the finals as B/R aggro versus his R/G large idiots.

This resulted in Challonge telling us:

I was a WORTHY ADVERSARY to Peeblesâs SUPREME CHAMPION!

The matchup did not seem terribly good on paper since he has mostly large creatures that line up pretty well against my choice of removal spells. Slay is an all-star against him boarded, and it is telling that the only game I won against him was in the finals when I drew three Slays.

The further details and decks can be found here.

However, not all of the eight-mans we have played have been Constructed-only.

Prolepsis decided to fire another take on Sealed: âGG 8-man: Choose your own sealed 2â.

The rules were as follows:

In this eight-man, we had quite a few good players with their chosen sets afterwards:

One of the more interesting strategies in this eight-man was to choose as many sets as possible with X spells, such as Fireball, Rolling Thunder, Disintegrate, and Blaze, or as many sets with gold cards (since they tend to be above the average power level).

Also, modern sets tended to have more and stronger playables, but there were people willing to roll the dice on dual lands and/or Moxen.

I managed to take it down with my awesome Jund-themed Sealed deck:

"Choose Your Own Sealed: Jund"

Further details and results of this eight-man can be found here.

The last interesting recent eight-man that we have run was Mana-Cost Singleton.

All decks must choose 1 mana cost (for example,

), and all cards in your deck must be a basic land or spells with that mana cost.edit: Hybrid cards are their own mana cost, so are likely unplayable.

editedit: Split cards are ok as long as one half counts.

.Format is Vintage. This is not "singleton" despite the title.

All games will be played at a reasonable pace on MWS, and tardy players will be forfeit.

Notable players in this eight-man included:

Prolepsis ended up defeating me yet again to become the supreme champion yet again, in a mono-red mirror in which most games were decided by whoever got to draw first (and drawing first was actually the correct strategy).

More in-depth and interesting details and decks can be found here.

Iâd like to thank GoodGamery for having all of these alternative Constructed (and Limited) formats that have helped me develop as a deck builder and playerâit forces you to see unique situations and deck-building decisions that you normally do not encounter within the sanctioned formats.

Jason Ford: just asked my cointern to help me tape something up

Jason Ford: it was about as embarassing as if i asked you to do a belly dance for me 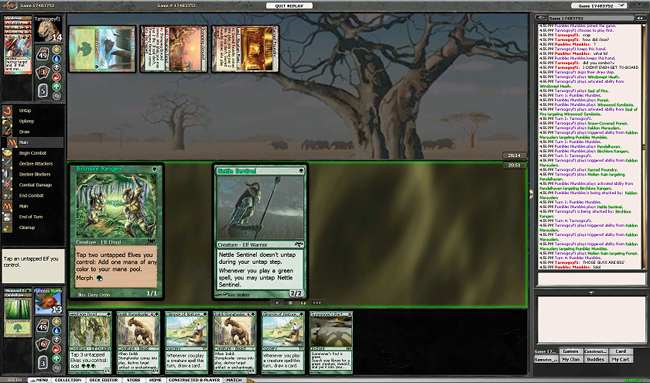 Peebles: you could do all dudes if you wanted

[11:13] prolep: and tilt your opponents when he sees your two dragons