I didnât mean for it to happen, but âWho to Followâ is gradually becoming assumed by the general population to mean âWho to Follow on Twitter,â which wasnât necessarily my intention at the outset. I provide a lot of handy links to all manner of social media, but that doesnât change the fact that slogging through a lot of past writing, contributions to social media, and a lot of old posting takes dedication. Youâre going to look at all of that stuff if youâre interested (hence my selecting people who I think are interesting), but if all you get out of a particular topic is someone new to follow on Twitter, every once in a while, I am going to focus on people I think contribute to Twitter specifically in a positive way. Iâve taken a few soundings in the Twitterverse, and the feedback was as voluminous as it was expeditious. To put it less douchey, a lot of you have a lot of opinions about who makes Twitter worth reading. Iâve filed a lot of the suggestions away for future consideration, but today, I had two contributors locked and loaded who I think are well worth following on Twitter (at minimum!), so things worked out nicely.

I am not going to abandon the format of this series entirely, especially given the fact that a lot of the people I profile contribute a lot to the community, and a hundred forty characters doesnât do most of their contributions justice. However, Iâm keeping the Twitter contributions of the people I profile in mind, and Iâll indicate when I think it will be sufficient to follow the contributor on Twitter alone for those of you who have busy lives and want to optimize their stream and donât use a lot of different social media.

One final word about formatting: Iâve received some feedback from people who primarily use Twitter on their mobile devices. I canât think of a more convenient way than hyperlinking the Twitter page in question so that once the link is followed, all you have to do is click âfollow,â and youâre done. Do you have suggestions for a way to make things easier for mobile users? Thatâs what the comment section is for, but many of you havenât been shy about tweeting or e-mailing me, and thatâs just fine.

Enough of my blathering; itâs time to hear about the coverage team. 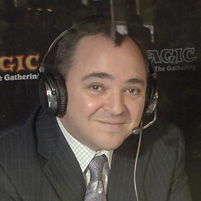 Where You Know Him From: I just told you: coverage. Also, apparently he started a comic book company.

Youâre a savvy individual. You read articles about this game, and youâre looking to optimize your online presence. That said, I feel a little silly introducing BDMâitâs a bit reminiscent of my first WTF article, only this time, Iâm not trying to sell you on the concept. If you follow pro coverage, youâve seen Brian David-Marshall give interviews, talk deck design, and comment on the matches. BDM is ubiquitous in the upper echelons of the game, but he spends his downtime interactions with the community as a fantastic ambassador to the game also.

If you are looking for someone to follow on Twitter specifically, may I recommend Mr. Brian David-Marshall? He tweets often, yet he doesnât flood anyoneâs feed with nonsense. If you ever wanted to learn way more about the game than you ever thought and by accident, his Twitter feed is where itâs at.

I am going to make a special plea to you to consider checking out his Facebook contributions. Just this week, he decided to present fifteen John Cusack movies and asked his Facebook followers what their pack-one-pick-one selections from the list were and which films they wanted to try to table. At the time, I called it my favorite thing ever. Since then, Game of Thrones season two has come out on DVD and Blu Ray, and Iâve discovered Jimmy Johnâs sells day-old bread for like fifty cents, Bill Gates has done an IAMA, and Christoph Waltz has won an academy award, and that Cusack draft remains my favorite thing. I donât know that I can overstate the value of someone facilitating fun that the Magic community can enjoy with a Magic spin on it. Read his articles, and whatever you do, follow this man. 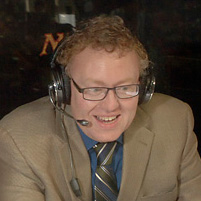 Where You Know Him From: Being Brian David-Marshallâs partner in crime

See what I did with the pictures there? You like that? Not only are these two gentlemen a crack coverage team, but I consider them equally important contributors outside of coverage in their own rights. Prolific writers both, Mr. Hagon is also somewhat of a role model to me in my endeavors to step up my podcasting game. He brings years of experience and connections within and familiarity with the community at the highest levels that I can only aspire to. Richd is friendly and approachable (at least in all of my dealings with him, and I doubt anyone is going to contradict me) at events, and I feel heâs a good ambassador to the game.

If youâre just looking for someone to follow on Twitter, I recommend him if you are looking for insight into coverage, future events, or announcements on his contributions past and future. Heâs âgood value,â as we say in this business, and I couldnât very well recommend BDM and not recommend Rich Hagon as well. If you have any interest at all in what goes into coverage, want insight into how decisions are made with respect to coverage, or are interested in hearing how podcasting should be done, ideally, I canât recommend these two gentlemen highly enough.

As long as weâre focusing on Twitter more than usual, youâre all following MaRo, right? Of course you are. Are you participating in #RosewaterRumble? You all know what that is, but Iâll explain anyway. MaRo is pitting all of the sets he worked on head to head and having the fans vote for their favoriteâbracket style. One clear winner will emerge at the very end. It started out easy with the fan-favorite sets routinely earning over 75% of the vote, but how would you pick between Ravnica and Zendikar? That one wasnât easy for me. What it was, however, was a lot of fun, and lately, Iâve been enjoying little things like the Rosewater Rumble and BDMâs Cusack draft. This is a childrenâs card game played by adults, and I love when itâs not all serious business. This is a good chance to follow Mark if you arenât already and a good chance to follow two other gentlemen I feel are just as important to the way we follow the game at its highest level.

Keep the feedback coming, and I bid you adieu until next week.