I have done my due diligence and played some games with Tergrid in the 99 and I think the only reason Tergrid is sometimes acceptable in the 99 is because sometimes you don't draw the card. That's basically it. I suspected that the card was a really bad time in decks where you always had access to it and also the deck was built around it and, good news, that HAS to be true, because Tergrid is completely bogus in a deck where you don't have access to it at all times and the deck isn't built around it. A spell like Pox or Death Cloud is sort of demoralizing without one player getting everything that the other players lost access to, so spells that were pretty abusive before are now untenable. That's not the kind of life I want to live.

I like taking their stuff. People don't love having their stuff taken, but they don't like having it destroyed, either, so if you're going to beat someone at a game of Magic, you're going to have to do some things they don't love. 75% building has taught me to steal their stuff and webcam has taught me to steal their face-up cards. I have been slowly replacing Thada Adell with Thieving Skydiver, for example, in an effort to still get mana rocks but not doing it in a way that makes them handle their deck in an odd way. Gonti isn't good on webcam and with Tergrid not being the alternative I wanted and me not being ready to brew with Draugr Necromancer just yet, I turned my attention to a way to disrupt their game plan in a way I hadn't in the past - by stealing their land. 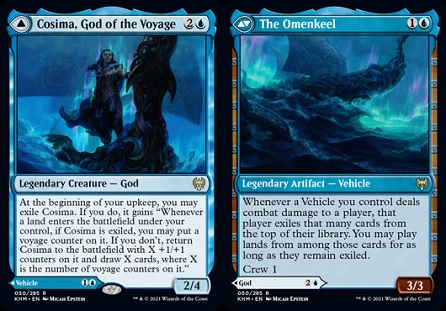 Cosima is kind of decent on the front half and I indeed might end up casting it from time to time, but the real winner here is Cosima's vessel, the Omenkeel. When you hit them with vehicles, which is admittedly a weird thing to have to do, you can exile cards from the top of their deck and play lands from among those cards. Playing their lands is a cool way to mess with their strategy because it could keep them from doing really broken stuff with lands like Nykthos, Shrine to Nyx, Cabal Coffers, or Gaea's Cradle. However, milling them randomly could just as easily draw them right to their good lands as it could past them, which made me have a second thought.

The Omenkeel bashing them can't do much about lands already on the board. However, this isn't the only way to take lands. We can do some shenanigans with Political Trickery, trading a land of theirs we don't really need for one we don't want them having. We could put lands on top of their deck with Temporal Eddy or Gone Missing. We could straight up just Annex the land. With so many ways to make sure they don't get to keep Boseiju, Who Shelters All or, heaven forfend, Homeward Path, we are sure to be able to make them play a more "fair" brand of Magic by restricting the lands they can keep to lands that tap for mana. Spells that bounce cards to the top of their library are also very handy for dealing with a troublesome permanent because we're going to mill it into exile when we hit them with vehicles. The stock Cosima build focuses on vehicle shenanigans mostly, but I like the idea of using Cosima as a venue for cards I always like to use like Helm of Possession and Desertion, new spells I want to try out like Annex and Ghirapur Orrerry and just a soupçon of vehicular shenanigans. We may even complicate their lives further with cards like Overburden and Mana Breach. The resulting mix should be a very satisfying brew, distinct from the stock list and very, very 75%. Let's see what I come up with, already.

I think this is a great start. I'm not sure how much of the stuff that I added is correct, but I think we are pretty close. Let's look at what I did.

Something I am happy with and might even want to pump the gas even more on is that inclusion of cards like Temporal Eddy. Spells that put cards on top of their library effectively removes them since we're going to hit them with a vehicle and exile it. That means we can deal with their permanents on the board as well as the stuff they haven't drawn yet. Being able to exile something at will and not give them anything in return is fairly uncharted waters for Blue - it usually either takes a bounce spell and a counterspell or it requires an artifact that can exile the card, which is usually expensive. Blue has Pongify and Ravenform and spells like that but I'm not interested in gifting them permanents, I'm interested in yeeting something to the top of their deck only for me to roll over it with a tank or submarine or Smuggler's Copter. I like experimenting with spells that are a bit more expensive but are also more versatile, shunting their problem permanents to their "exile waiting room" on top of their deck. This is inherently a little risky, but having access to their Gaea's Cradle or Cabal Coffers if only to deprive them of the huge boost, is worth it. There are some cool utility lands that people play that are fun to snag. Is it more straightforward to just run removal? Sure. But what fun is that?

Speaking of fun, I've never included Magus of the Unseen in a deck before but I think it could be a lot of fun. I realize my MO in the past has been to sac those artifacts rather than give them back and I don't have a way to do that here, but I'm not super worried about it. We have plenty of ways to steal stuff permanently. I considered running a Krark-Clan Ironworks in the deck because I have Master Thief, but decided against it. That's pretty cute. I don't want to be saccing MY artifacts, after all, just theirs, and it won't happen that often.

Overall, I think this is an excellent venue for playing a lot of my favorite Blue spells while simultaneously smashing them with a bunch of big, stupid vehicles and laughing. Playing their lands is awesome and while Blue doesn't have too many ways to let you play extra lands, you'll never miss a land drop at least, and you may end up with some great utility lands that are much better than what you were going to play.

That does it for me this week. Did you overlook Cosima at first like I did? Do you have a list you're going to try out soon? Leave it for me in the comments section. Until next time!