*Editor's Note: This article contains discussion about leaked cards, cards that have not officially been previewed in War of the Spark Preview Season. These cards are not yet proven to be real, so take the following discussion with a grain of salt. If you'd like to avoid content which discusses the leaked cards, then read no further!*

So, you think you can Super Friends. That's a good idea considering we're getting approximately 114 new Planeswalkers and we're also getting 'walkers with static abilities which allows them to impact the board even if they don't have any abilities you can use or someone Pithing Needles them. This set is going to be bonkers and give us a ton of new ideas, so how about we dispense with a very old idea before we even try to plan what we're going to do next?

We get it, the Proliferate is great and it naturally lends itself to a deck with a lot of permanents that have counters on them and Planeswalkers are a natural choice. However, I'm really bored with Atraxa decks. Atraxa is the most popular commander of all time on EDHREC and while Atraxa is certainly going to get a little better with a few new Planeswalkers, can we not get a bit more creative? 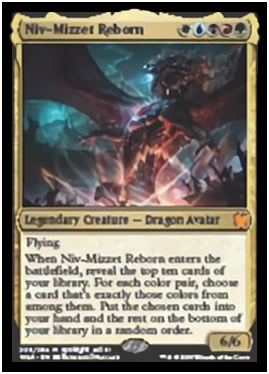 This new Niv-Mizzet is perfect. Ditching an Angel to build around a Dragon just feels right to the 12 year old me who used to use Tinder Wall and Orcish Lumberjack to get out a Shivan Dragon as quickly as possible to eat opposing Serra Angels, it feels good to the current me who wants to use the ultimate Super Friends card that was just revealed this week. 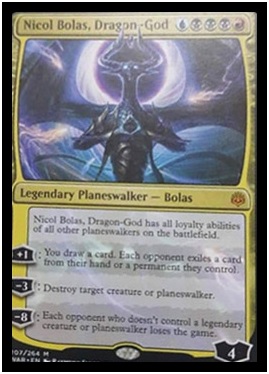 Having the loyalty abilities of all of your 'walkers plus any of your opponents' as well means you have a very versatile 'walker. Having access to Red mana makes it more than worth it to ditch Atraxa and as much fun as it is to proliferate all day, we have other ways to do it. 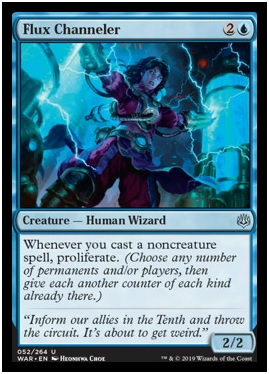 If cards like this being at uncommon are any indication, we will have no shortage of ways to Proliferate and we can concentrate on using our commander to keep our hand full and let our field full of mighty 'walkers do the rest. Access to Red mana also gives us access to both Tibalt 'walkers, and... actually, I'm just realizing that I'm writing this on April 1st but you're reading it on April 4th so any references to Tibalt making the cut aren't going to scan. Sorry, Tibalt, we have better reasons to play Red.

We want to benefit from Proliferate and ideally play all of the cards in our hand easily which makes me think we'll want to cheat. I think Dream Halls is an excellent pairing for Niv-Mizzet. When I first read the card, my first thought was "Conflux on a stick" and as soon as I started thinking about Conflux, I thought of Dream Halls. As Foretold benefits from our Proliferate plans as well as doing a decent Dream Halls imitation and since we finally have access to Red mana, why not jam Maelstrom Archangel? Worst case scenario you can pitch her to Dream Halls, best case scenario, she nets you a free 'walker a turn. If you're sad that you had to pitch something cool to Dream Halls, don't worry, Muldrotha and Nicol Bolas, the Ravager allow you to get your pitched cards back. This is going to be the cheatiest deck I can think of so in addition to a ton of fun 'walkers, we'll be running Jodah and Fist of Suns to make sure we can play everything we need to. That's a lot to jam in a deck but we'll make room. The cure for the common Super Friends deck is on the way!

This obviously isn't perfected yet, but what really struck me is how few of the new Planeswalkers I wanted to add. Let's go over the cards I did add.

Ob Nixilis, the Hate-Twisted is a great way to hose people who draw extra cards and you can kill 2 creatures while still getting the benefit. I'm sold.

Ignite the Beacon either grab you two things to pitch to Dream Halls or it gives you the 'walkers you need.

Nicol Bolas, Dragon-God is a shoo-in. I want access to as many other abilities as I can get, especially with The Chain Veil and Oath of Teferi letting me get multiple activations. A good planeswalker ability is good, getting it four times a turn is gooder.

Kiora, Behemoth Beckoner is another infinite combo with The Chain Veil and even though the deck has tutors, I think it's fine here. Cut it if you're sick of her static ability doing nothing.

Karn's Bastion proliferates. I heard you liked that.

Interplanar Beacon is a card that goes in this deck.

This will likely get updated as you both see new cards revealed in War of the Spark and as you test this and your mana ruins your day. Tinker with this and I think you'll find it's a great starting point, it's a fun deck that you can modify to suit your needs and it's a cure for the uninspired Atraxa decks out there. Until next time!