It's no secret that I like to steal my opponents' creatures and other permanents both as a way to play Magic generally and as a way to build 75% specifically. For the most part, I've been using Blue to accomplish that, but lately I have delved into other colors, and sometimes that includes Black. Red makes an excellent case for itself with cards ranging from Aladdin in 1993 to Robber of the Rich most recently, but for my money, Black is doing it almost as well as Blue. With that in mind, I look at new commanders a bit differently from how everyone else looks at them and it was with this in mind that I thought about how I wanted to build a commander from Throne of Eldraine.

Ayara does not at first appear to lend herself to swiping of any kind. I like to pair abilities like this with Red so that if I am supposed to return a creature I threatened, I sac it instead and send my opponent a bill for the corpse disposal costs rather than the healthy and alive beater they had when they first got a ransom note and a toe in the mail. Ayara isn't an obvious choice for a deck that's going to focus on stealing their creatures but to understand the method to my madness, we're going to take Black creature stealing back to its roots. How far back are we going? All the way back to 1993 with a little card from Alpha you may have heard of. 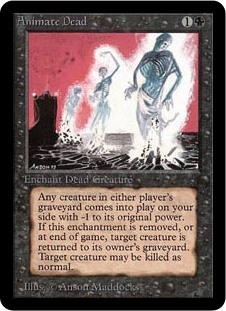 That's the stuff. Just look at those corners! The Judge FAQ right in the text box, the black border so dark you can barely read the white letters, the incredibly literal art. It even has the card type "Enchant Dead Creature" because of course it does. The game has come a long way since 1993, but Black never forgot what it likes to do best - disrupt the eternal slumber of the grateful dead by conscripting them to servitude. What does this have to do with Ayara, though? Well, my goal is to load up on these effects and make sure their graveyards are fully stocked with lots of tasty options by making my opponents play a macabre game of "Simon Says" where the only thing Simon does is sacrifice a creature and they have no choice but to play along. Ayara is great at saccing creatures and Black is great at making sure your opponents follow suit.

Grave Pact effects are going to be the main way we keep the field clear and give ourselves options in their graveyard. While we like to sac creatures because doing so can draw us cards and trigger cards like Blood Artist, our opponents will be less thrilled, especially if we sacced a Thrull token or a Solemn Simulacrum and they have to sac their commander or a big beater. Attrition is an excellent way to keep them honest if they won't sac the creature we really want dead and paying the cost on Attrition has the added benefit of triggering our Pact effects to make their lives even harder. It's mana-Intensive to run the full suite of Pact effects if you want to add Butcher of Malakir at a whopping seven mana, but if we can find room, we'll try and we'll certainly run Grave Pact and Dictate of Erebos. Creatures like Plaguecrafter will keep them on their toes and have the added benefit of being easy to loop in a deck like this with Animate Dead effects.

We have quite a few ways to fish dead creatures from their yard ranging from one-shot spells like Animate Dead to big, world-ending spells like Rise of the Dark Realms. If you don't mind paying some life, try Reanimate (It says any graveyard but most players are so used to just using it on their own creatures that they don't realize it can steal their dead creatures) and if you don't mind paying some mana, try Dance of the Dead. One spell I wish more people used is Ritual of the Machine, an Alliances card that lets you gain control of one of their creatures if you sac one of yours. It's a powerful effect, it's rare in Black decks and it's one more sac effect in a deck that can make great use of those.

I have recently started adding artifacts that can steal their permanents to just about all of my decks since using their own cards against them is how I like to win the game and two of those artifacts, Mirage Mirror and Mimic Vat have been doing a ton of work lately. Vat in particular has a lot of utility because it can exile a creature that a graveyard-based deck may be relying on and keep them from looping it or it can just crank out copies of the best creature you can imprint. Imitation is the sincerest form of flattery but it's also a great way to get access to good cards you didn't have room for or which aren't in your color identity as a Mono-Black deck.

As a capper, I plan to include a lot more Planeswalkers than I normally do because there are quite a few Lilianas that can dumpster dive in your opponents' yards and come out with some buried treasure.

Add these plans to the typical Mono-Black infrastructure of cards like Black Market, Crypt Ghast, Cabal Coffers, and Ashnod's Altar for mana and ways to generate some tokens and what you've got is a very potent deck that can swipe their stuff as well as any Blue deck but can keep their board completely clear the way only Black knows how. Let's see where we land, shall we?

I think I'm going to sleeve this up and take it to the LGS, honestly. This ended up being way more fun to build than I had anticipated and that is largely due to a new card - Piper of the Swarm. Lost in the shuffle a bit when Throne of Eldraine gave us a bunch of cards that would end up banned in multiple formats, Piper is a very 75% Black card. For the low, low price of a few rat tokens, you can take a creature from them and keep it, no questions asked. Well, maybe not no questions asked - in my experience when you steal a creature, people ask questions like "Why me?" and "Are you sure you wouldn't rather take this creature?" and "So who's giving you a ride home from the LGS since I'm not going to after this?" and other delightful queries. So with some questions asked, you get to steal a creature. Luckily the deck lends itself very nicely to a rat token subtheme because you were pretty likely to play Ogre Slumlord in the deck already as well as Chittering Witch. When you search gatherer for cards that create rat tokens you also come across an interesting one - Plague of Vermin. It's very much a gambler's card and I like it a lot. If you're feeling really frisky, try adding Pack Rat, which is a way to turn excess lands or creatures you want to reanimate into rat tokens that grow the more you have. Remember, Pack Rat doesn't just count itself, it counts all Rat tokens so a big Plague of Vermin could lead to a nasty alpha strike if you manage to kill their blockers.

One card I don't think gets enough love is Endrek Sahr, Master Breeder. It's very easy to get a ton of tokens every turn with Sahr and while getting too greedy will end the whole affair, saccing them at a steady rate makes sure you have a constant supply of tokens to sac to your altars or draw cards with. If Sahr dies because you got too many tokens out, don't worry - you're a Reanimation deck and you can always get him back.

I like the second subtheme of looping creatures with Nim Deathmantle so I included a Panharmonicon in the deck because if you get going with Gonti you can really wreak some havoc. Mana shouldn't be a problem late in the game with all of the altars and small creatures to throw on them so get as many Gonti activations as you can, or Gray Merchant if you find it and want the game over. You don't have as many ETB creatures as you'd need to fully take advantage of Panharmonicon but you will draw a lot of cards and you really only need to find one.

That does it for me this week. What do we think? Too similar to a stock list? Do I not know how my cards work? Is this just crazy enough to work? Leave a comment for me about this or your craziest Rise of the Dark Realms story. Thanks for reading, everyone. Until next time!