This has turned into a series by popular demand, which is fine, because until this week we hadn't had many spoiled cards from Ravnica Allegiance and I was chomping at the bit for something to discuss that pertained to the set even if it meant we had to try to predict the future a bit. There's less pressure on us to do that now that we have some spoiled and some previewed cards. Remember - when someone else previews a card, it's a spoiler and when you spoil a card, it's a preview. A few cards leaked but we also got some official cards to look at and I'm sure by the time you're reading this, we've gotten a few more. The most important thing that happened earlier this week for the purposes of this article, though, was that we finally got an answer to the question "What is espectáculo anyway?"

We found out the answer to all that and more when a batch of Rakdos cards were revealed on Monday. As a non-Rakdos player for the most part (an exception was made for Olivia Voldaren who is 75% to the core) I was excited by most of them, especially this one. 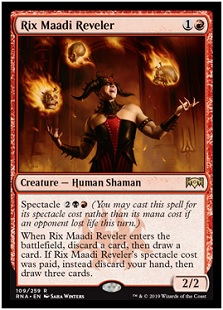 The spectacle cost here is higher than the creature's natural casting cost but it's quite worth it because the effect is a great deal better. Spectacle merely existing will cause your opponents to block quite differently when you attack with Rakdos creatures, especially in Limited and this mechanic may teach newer players to play creatures after combat. I like this mechanic a lot and it got me thinking about how many Spectacle cards will fit into existing Rakdos decks and how many existing Rakdos strategies will be viable when we get new Rakdos commanders. To figure out how useful Spectacle is likely to be moving forward, let's first look at how Rakdos currently wins the game.

Rakdos can make big, flashy plays like smashing into someone with Master of Cruelties or casting Banefire for a ton, but a very Rakdos way to win the game is through incremental advantage. In Limited, Rakdos goes very fast, sacrificing long-term plans for speed and explosivity. However, Commander players have figured out how to "loop" some of those sacrifices to turn a reckless, impulsive plan to go faster into a sustainable advantage engine. Pitching cards to Olivia, Mobilized for War can seem like a losing proposition until you realize you can pitch Squee, Goblin Nabob and empower all of your creatures without suffering any card disadvantage, or you can use that pitching trigger to your advantage, discarding a card with madness to get a cost reduction on the spell. Discarding your entire hand seems foolhardy, but when Malfegor forces everyone else to do the same, you're likely to be better equipped to fill it back up than your opponents who didn't see this coming. Tymaret, the Murder King and Lyzolda, the Blood Witch are optimized for decks where you can hope to turn these advantage engines into a win, punishing opponents for not having the infrastructure in their decks to withstand the constant requirements to keep losing their permanents and cards in hand. At first you might not think a guild such as Rakdos that excels at dealing 20 damage quickly in Limited with unleash creatures would scale well into multiplayer, but a lot if its best effects affect the entire table, meaning for every one card you discard to make everyone else discard, you're getting a three-or-more-fold return on your investment. Dealing 20 damage quickly comes naturally to Rakdos, but they're prepared to grind out a win and 120 damage is just as doable if they let you get set up.

It's Better to Punish than Prevent

One thing a 75% deck seeks to do is punish opponents for doing things we don't like rather than trying to prevent them from doing things. This doesn't always work in practice, but perhaps no guild punishes opponents better than does Rakdos. Commanders like Kaervek the Merciless allow your opponents to play any spells they'd like, but at a pretty severe cost. Mogis, God of Slaughter requires tribute every upkeep phase and if they elect not to play creatures that will be eaten by his Blood Clock ability, they'll pay with their lives. Lifes. Their life points. They'll have to pay 2 life. That adds up and if you can keep their boards clear, and you should be able to do that, you can chip away at their life totals passively and work on swinging into empty boards. It's not just the commanders who get in on the fun - one of my favorite Rakdos cards in Commander is Rakdos Charm which is incredibly versatile, hosing graveyard, artifact and token strategies, whichever is most relevant. I have dealt more damage with Rakdos Charm than I have with any other Magic card.

Though not the best color combination for graveyard shenanigans, there are a significant number of popular Rakdos commanders that can bring creatures back from the dead, which is very useful since other Rakdos cards tend to be powered by sacrificing creatures. Get the two working in concert, and you've got a Rakdos stew, baby. Bring back a Goblin with Wort, Boggart Auntie, get an entire board back with Garna, the Bloodflame, get a Dragon storm going with Bladewing the Risen or have your graveyard be a very temporary resting place with Grenzo, Dungeon Warden.

The card that feels the most like what I want to be doing as Rakdos, though, is Rakdos.

We want to be doing the other things those other commanders do to clear the board, tear their hand apart and create advantage. In this way, I think players get it a bit twisted. They want to focus on doing those Rakdosy things and deal damage to opponents as a matter of course. I think if we focus on dealing damage and do other Rakdos things as a matter of course, we'll come up with a build that is the most Rakdos and which will also optimize the use of Rakdos, Lord of Riots as a commander and also optimize our cards with Spectacle and have the best chance of being a good basis for a deck based on a new Rakdos commander from Ravnica Allegiance. Is Rakdos my favorite Rakdos commander? No, that would be my Xantcha because of my Mindslaver tribal deck. Does Rakdos "feel" the "most Rakdos" to me? Yes, and I want to tune up my old Rakdos deck to be optimized for what I think the future of Rakdos will hold.

This list was conceived when a reader sent in their Rakdos list and I attempted to give it the 75% treatment. It's not necessarily the best jumping-off point to make a pure Rakdos deck that does Rakdos things, so I am inclined to start over from scratch. That will give me the freedom to try a few different approaches without worrying about cards that were in there to work with a different approach. In general, I want to be able to do the following things; 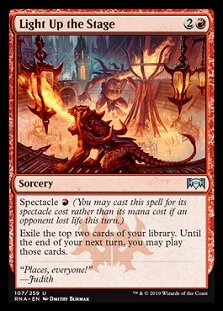 I think the way to build a Rakdos, Lord of Riots deck has changed a lot since the last time I built it with the printing of more Eldrazi, lots of huge demon creatures and with the printing of Vial Smasher the Fierce which practically begs you to play a ton of expensive spells. Built properly, a Rakdos deck won't have to choose between using mana to deal damage with something like Pyrohemia or summoning creatures because every damage you pump into hurting them is an investment in a bigger creature. Keeping our hands full will be a bit of a challenge which is where cards like Rix Maadi Reveler, Light up the Stage and even Sandstone Oracle come into play. We'll want to steal as much of their stuff as we can, so Etali, Primal Storm, Sepulchral Primordial, and It That Betrays will feature heavily in our plans. Finally, since Rakdos is so good at sacrificing creatures and we'll benefit from having the infrastructure, Threaten effects will be quite good in the deck, which is fine since we're trying to still build a 75% deck. Built to make the most of not only Rakdos the commander but Rakdos the guild, I think a good skeleton to take into the future knowing we're getting new cards is as follows.

This is a lot of fun. The synergy between Rakdos and Grenzo is something I recognized right away and I think it will be a lot of fun. Crypt Ghast and Neheb, the Eternal should give you the mana to fuel it, and stealing their stuff with Captivating Crew, Angrath or other means and saccing to an altar can give even more.

This isn't exactly where I want it but I feel like it's a nice sampling of what Rakdos can offer. You can take it in any number of different directions, from adding way more enchantments like Wound Reflection and Polluted Bonds, to adding more Eldrazi, to adding more things to sac to Altar (and more altars) and more Threaten effects. Whatever you decide, it's bound to be pure Rakdos and it's bound to play well with the new cards we get from Ravnica Allegiance.

What do you think? Did I capture the spirit of Rakdos? Did I miss something major? Do you have a favorite Rakdos commander? Leave it in the comments section. I'll be back next week with more new cards to talk about and another guild to delve into. Until next time!