Way back in Living Legends of Dominaria, I did a short profile on Dakkon Blackblade and the Blackblade Reforged, but today - with Modern Horizons 2 indicating a return of Dakkon Blackblade himself, I'm going to dive in with much more detail! His story is intertwined with that of planeswalker Geyadrone Dihada, who was created for the Armada comics. Their story is told in the comic Dakkon Blackblade #1. There's only one issue, although it's a double-sized, 48-page story. Here's my old video, for the basics: 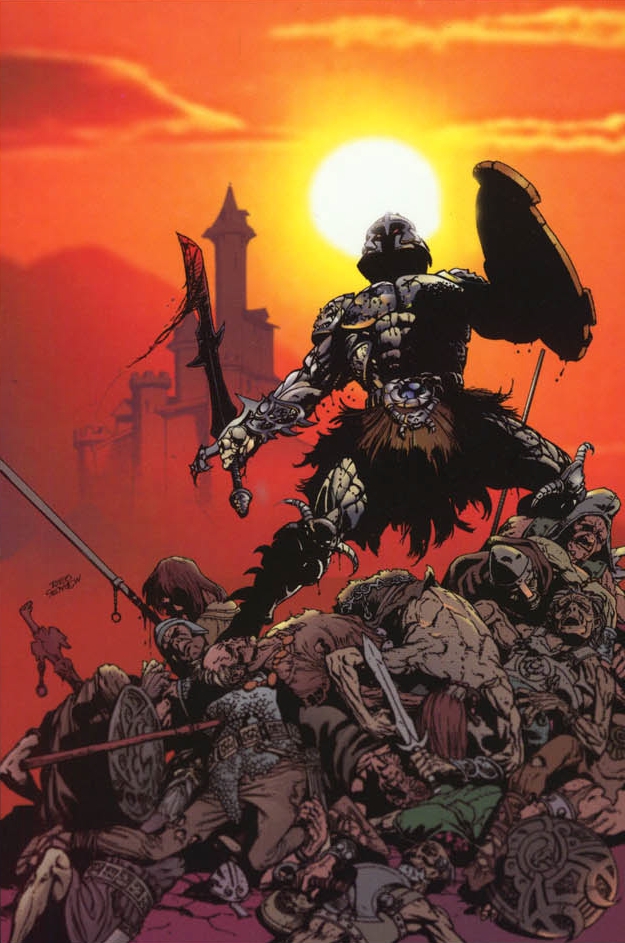 A young man with a crescent moon birthmark, called simply "Boy of Carth", is thrown into a dungeon for attempting to assassinate Geyadrone Dihada. Carth was forced to watch as one hundred of his tribe, including his mother and sister, were slaughtered by Sol'kanar the Swamp King, a servant of Dihada. In Dihada's dungeon, Carth meets the mad monk, who tells him the story of Dakkon Blackblade.

Legend has it that Dihada changed her shape and commissioned a sword from an armorer named Dakkon. She told him that she would give him undreamed of power in exchange for the finest blade in existence.

When Dakkon finished the sword, Dihada returned. She took the sword and plunged it into Dakkon's shadow. The sword drank the shadow and stole his soul. But Dihada kept her promise and gave Dakkon incredible power. He's chased Dihada across many worlds in search of his lost shadow, ever since.

The mad monk helps Carth escape, leading him to a spellbook that teleports him to the dead city of Sedouris on Corondor. Hiding away in the city, Carth summons Dakkon, who arrives in a fury at being summoned and bound by the Amulet of Tifu. Forced into Carth's service, Carth explains that Dihada is there on Dominaria, and that together they may be able to defeat her. The spell doesn't allow Dakkon to travel far from Carth, and if Carth dies, so too will Dakkon. Begrudgingly, Dakkon follows the young man's lead. 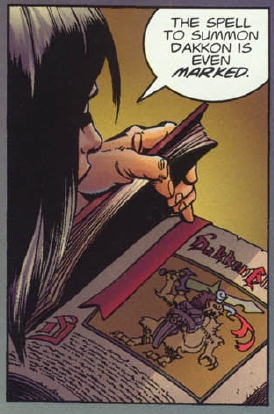 Sedouris was once a beautiful city surrounded by the Enchanted Forest of Khone, which was watched over by a guardian spirit of the forest. When Dihada came, she transformed the forest and with it, turned the guardian spirit into Sol'Kanar the Swamp King. Carth wants to slay Dihada to allow the land to heal from her curse. They arrive at Dihada's citadel, a broken remnant of Sedouris walking with legs made from the bones of the city's dead. While Dakkon has grown strong and is able to withstand Dihada's assault, Carth is injured, and Dakkon is forced to escape with him.

Recovering in Khone, Carth discovers neither he nor Dakkon cast a shadow any longer, an effect of Dihada's magic. He talks about how the Mad Monk set him on this quest, and Dakkon wonders how anyone would know of the story of his origin, as it happened a long time before and far away from Corondor. Dakkon explains that Dihada commissioned the Blackblade from him, and he forged it over ten years by sacrificing many people to the blade and letting it drink their souls (Battlemage would indicate he even sacrificed his own son, Daron).

Before they can ponder this question long, they're ambushed by Dihada and Sol'Kanar - the latter armed with the Blackblade. Dakkon battles the Swamp King, disarming him, and Carth picks up the blade to fend off Dihada's army of imps. 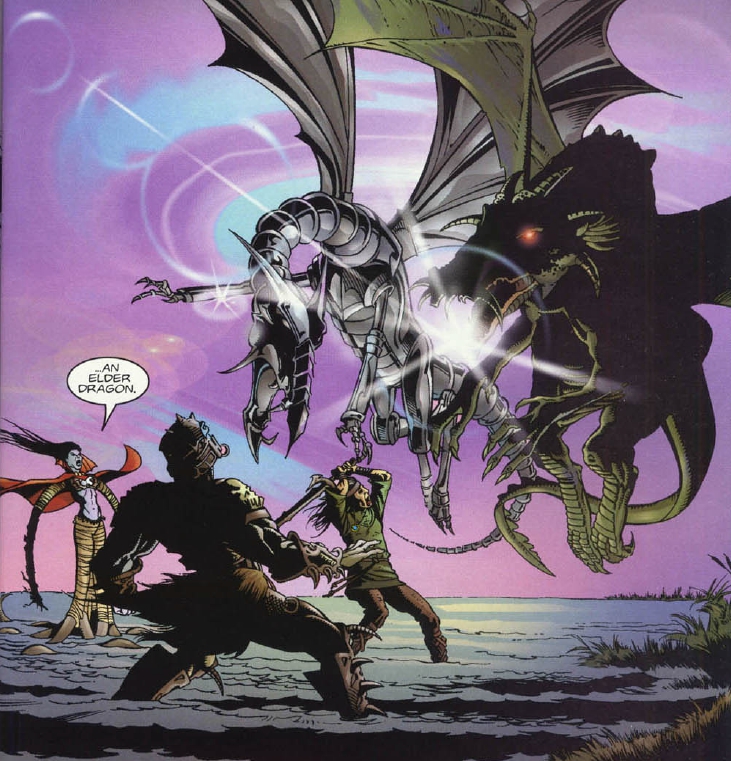 When it's clear Sol'Kanar can't defeat Dakkon, Dihada summons two elder dragons, Chromium and his mate, Piru. Dakkon and Chromium face off, and Dakkon soon finds his spark being pulled from him (perhaps the earliest instance of The Elderspell). With the power he has remaining, Dakkon banishes Chromium from the battlefield. Drained of his power, he's easy pickings for Dihada, who demands Carth return the sword, and makes the same promise she once made Dakkon. Carth possesses a spark, and Dihada can help him ignite it. Carth refuses, and tosses Dakkon the Blackblade instead. 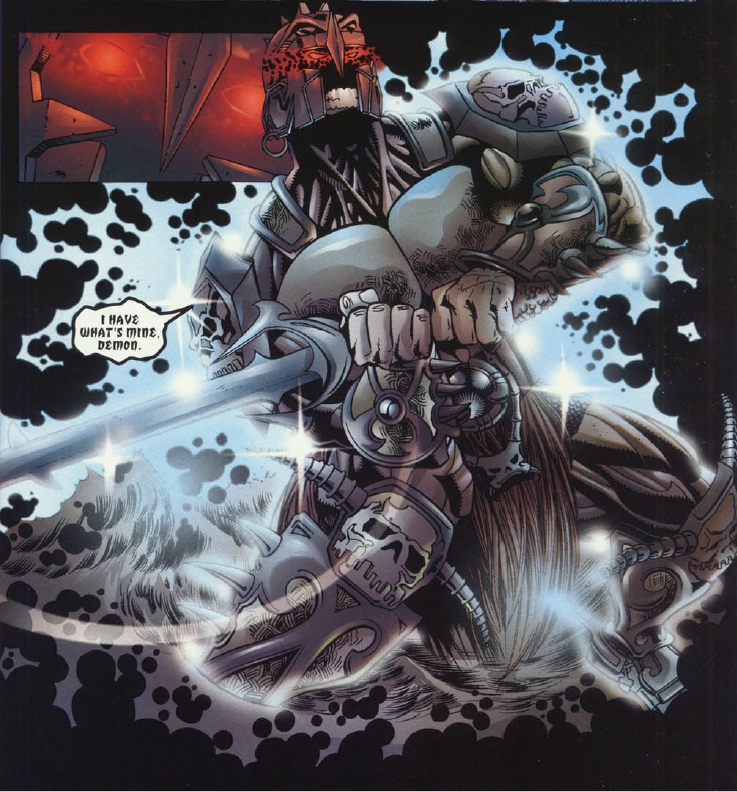 Armed with the ancient sword, Dakkon's power is renewed. He strikes down Piru, unleashing a wave of magic so powerful it creates a chasm so wide you can see it from space. But this is just what Dihada wanted, and the elder dragon's power flows into her. She reveals to Carth that she was the mad monk all along, and luring Dakkon to Dominaria was always her goal. The Blackblade is nice, yes, but she wants the warrior as her true weapon. Dihada captures Dakkon and marks him, binding him to her service and promising to summon him again in the future before departing.

There's nothing left for Carth on Corondor, and he decides to head to Terisiare to learn about the clockwork magic at work there. Dakkon is angry that he's bound to Dihada once more, but Carth points out that they both have their shadows again. Dihada may not be gone, but at least they have their souls back. Dakkon dubs the young man Carth the Lion, giving rise to the Carthalion lineage that would run through many of the early comics.

The back of the comic gives us a four page story titled The Dragon War, involving the former nature avatar Sol'Kanar and several other legends from Legends. I'm not going to get into that story here, but if you want to know more check out The Tale of Shikar, which retells that story a bit more briefly.

We wouldn't see Dihada again for millennia, when she returned in a video game opposing the most famous of Carth the Lion's descendants: Jared Carthalion, True Heir. The Armada comics had been steadily building toward the game and a comic tie-in adapting the game's story, but the comic line was cancelled shortly before it could be published. The events of the game are known as the Planeswalker War, but because of the variable story of the video game, we don't actually know what fate befell Dihada in the war. In fact, of all the main characters in the game, only Tevesh Szat, Doom of Fools and Kristina of the Woods ever appear again, and they're both killed off a decade later during the Phyrexian Invasion (without telling us what happened, I might add)! While there is a synopsis of the comic plot floating around, I should be clear it's non-canonical and I'm not going to reference it here. 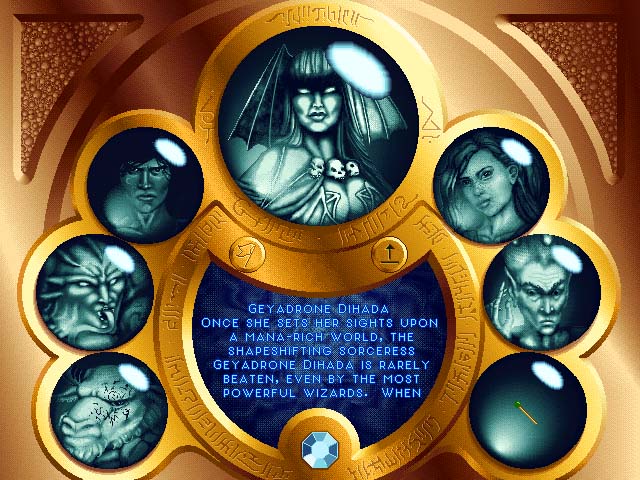 Official Screenshot of the Magic: the Gathering Battlemage video game.

The lore surrounding the game has this to say about demon planeswalker Dihada:

Once she sets her sights upon a mana-rich world, the shapeshifting sorceress Geyadrone Dihada is rarely beaten, even by the most powerful wizards. When she arrived upon Dominaria millenia ago, she set about conquering the continent of Corondor by corrupting its nature avatar into the dread Sol'kanar the Swamp King, and turning its vast forests into swampland. She then manipulated one of her greatest creations, Dakkon, into returning to her by tricking a boy named Carth into summoning him. But the cleverness of Carth and the power of Dakkon's black blade proved to be Dihada's undoing. Now, Geyadrone Dihada has noticed the Battlemage Ravidel's Mox Beacon. She has chosen this time to return to Corondor to exact her revenge on the Carthalion heir scion, take back Dakkon Blackblade as her chief lieutenant, and make the world her own... one continent at a time.

You can read the history leading up to the game in "History of Corondor" on the archived version of the official website. It's a great summary of most of the classic Armada comics. Thanks to April King, we also have transcribed copies of the in-text works from the game on her site for the Lore of MTG - Battlemage, including The Book of Geyadrone Dihada. Neither gives us any new information on the characters beyond the war, but we do know that Dihada wanted her ultimate warrior, Dakkon, back in her service.

Future Sight would show up that the Blackblade ended up with Korlash, Heir to Blackblade at some point, but there's no lore around Korlash himself. The Blackblade Reforged would wind up with the Cabal on Dominaria (leading into Return to Dominaria's plot), but it's not clear what happened to Dakkon himself. With neither Dakkon nor Dihada having an on-screen death - or even the implication that they've died - they could still be out there somewhere.