Welcome back, Lore Seekers! Today I'm going to spend some time catching you all up on the "Magic Story" so far, or at least since War of the Spark ended. Word count is at a premium, so let's dive right in.

War of the Spark Outcomes 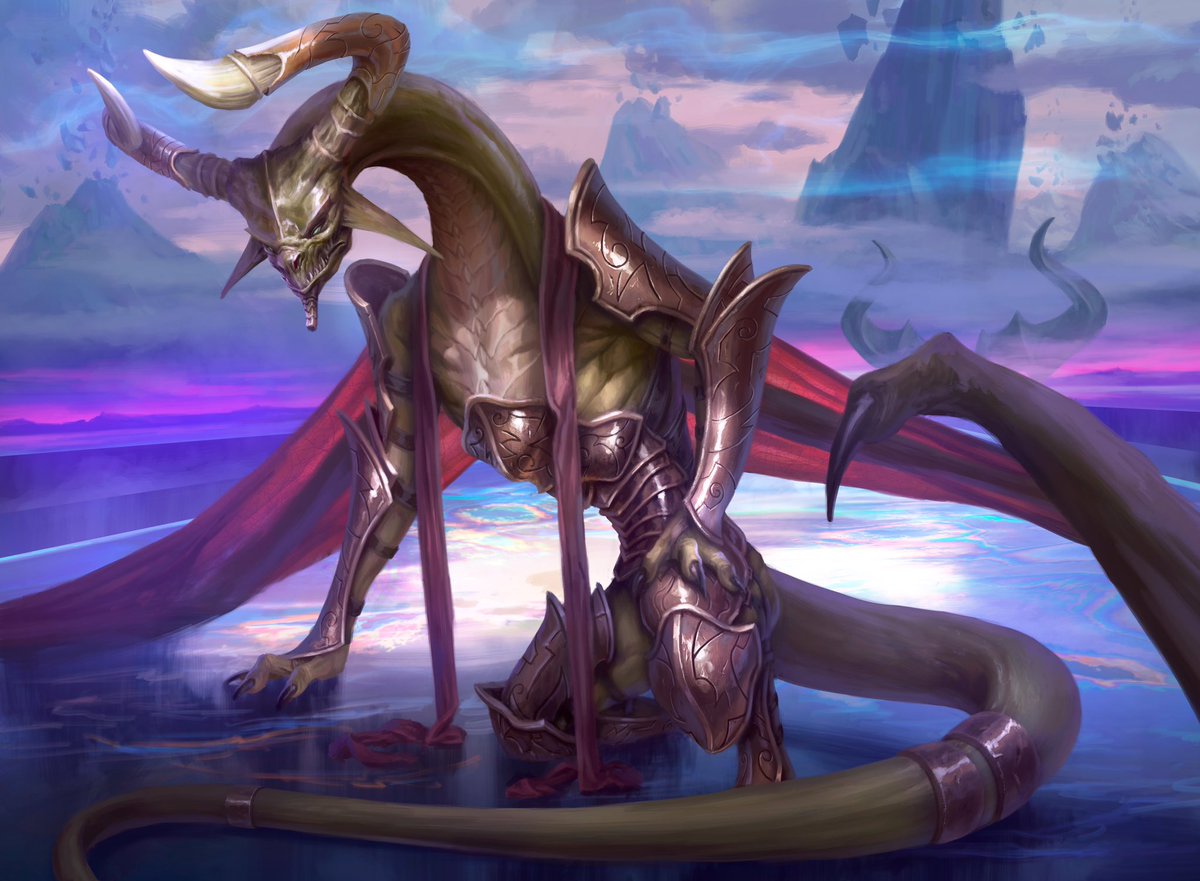 At the end of War of the Spark, Nicol Bolas, Dragon-God had been defeated and desparked on The Prison Realm, the former Meditation Realm, with Ugin, the Ineffable as his jailor. Liliana, Dreadhorde General escapes in the wake of Gideon's death - sacrificing himself to free her. She takes on a pseudonym and begins to live incognito. 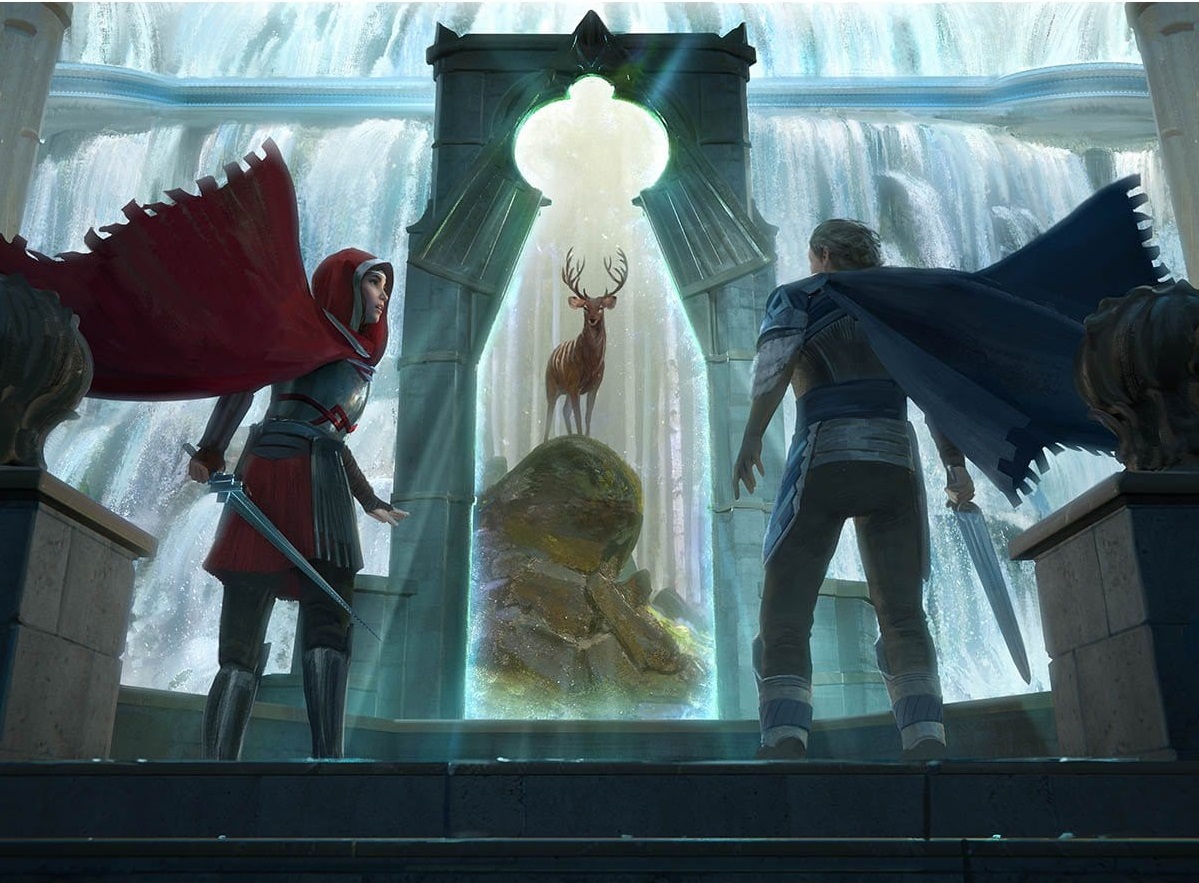 The Royal Scions, aka Will and Rowan Kenrith, meet Oko, the Trickster, who has Garruk, Cursed Huntsman under his thrall. Afterward, Oko transforms their father, Kenrith, the Returned King, into a stag. The twins go on a quest to find their father, and they succeed, in the process discovering The Cauldron of Eternity and freeing Garruk from both Oko's grasp and the Chain Veil's curse placed on him years prior. However, they also discover the dark truth, that their biological mother was a witch who ensorcelled their father and intended to sacrifice them for power, and that it was only their beloved stepmother Linden, the Steadfast Queen who saved their lives... at the cost of her quest to become High Queen. In the aftermath, the twins' shared spark ignites.

The events described here take place in the novella The Wildered Quest. 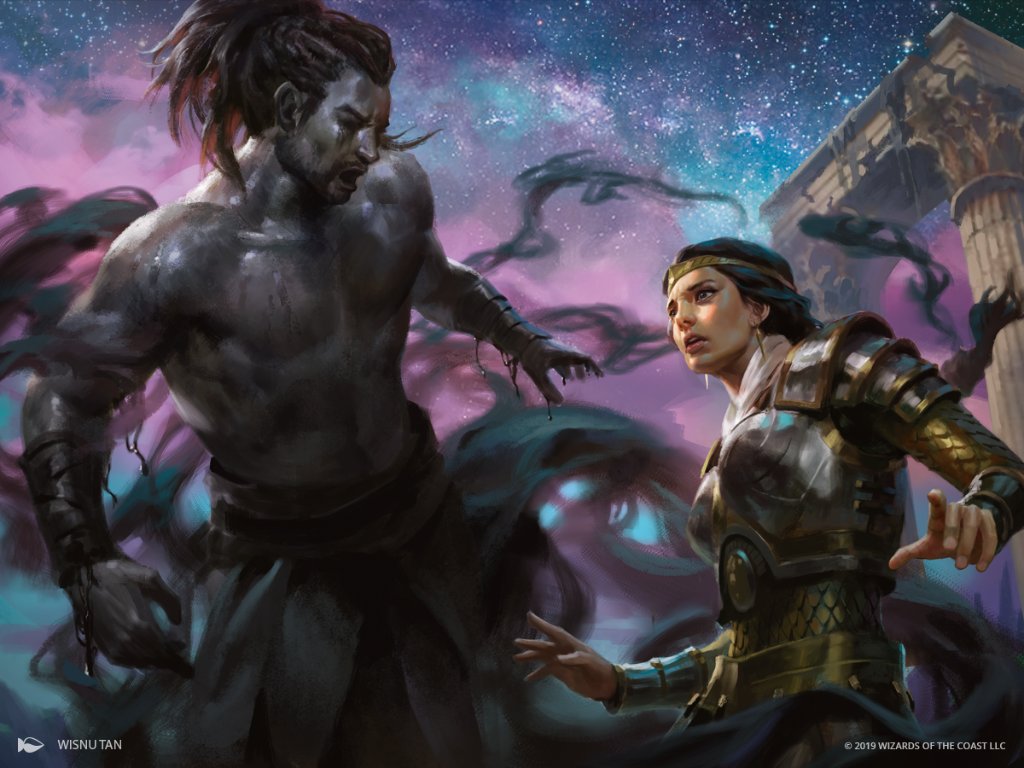 Elspeth, Sun's Nemesis is tormented by Phyrexian nightmares during her eternal rest in Ilysia, the paradise that awaits heroes in Theros' Underworld. Ashiok, Nightmare Muse is the cause, and Elspeth is shaken from her stupor and resolves to return to life, her work unfinished. She seizes the spear of the nightmare version of Heliod, Sun-Crowned that Ashiok taunts her with, and uses it to lead a revolt in the Underworld. She eventually tricks Heliod himself into confronting her in the Underworld, where Erebos, Bleak-Hearted is able to imprison him. As a boon, Erebos restores Elspeth to life. 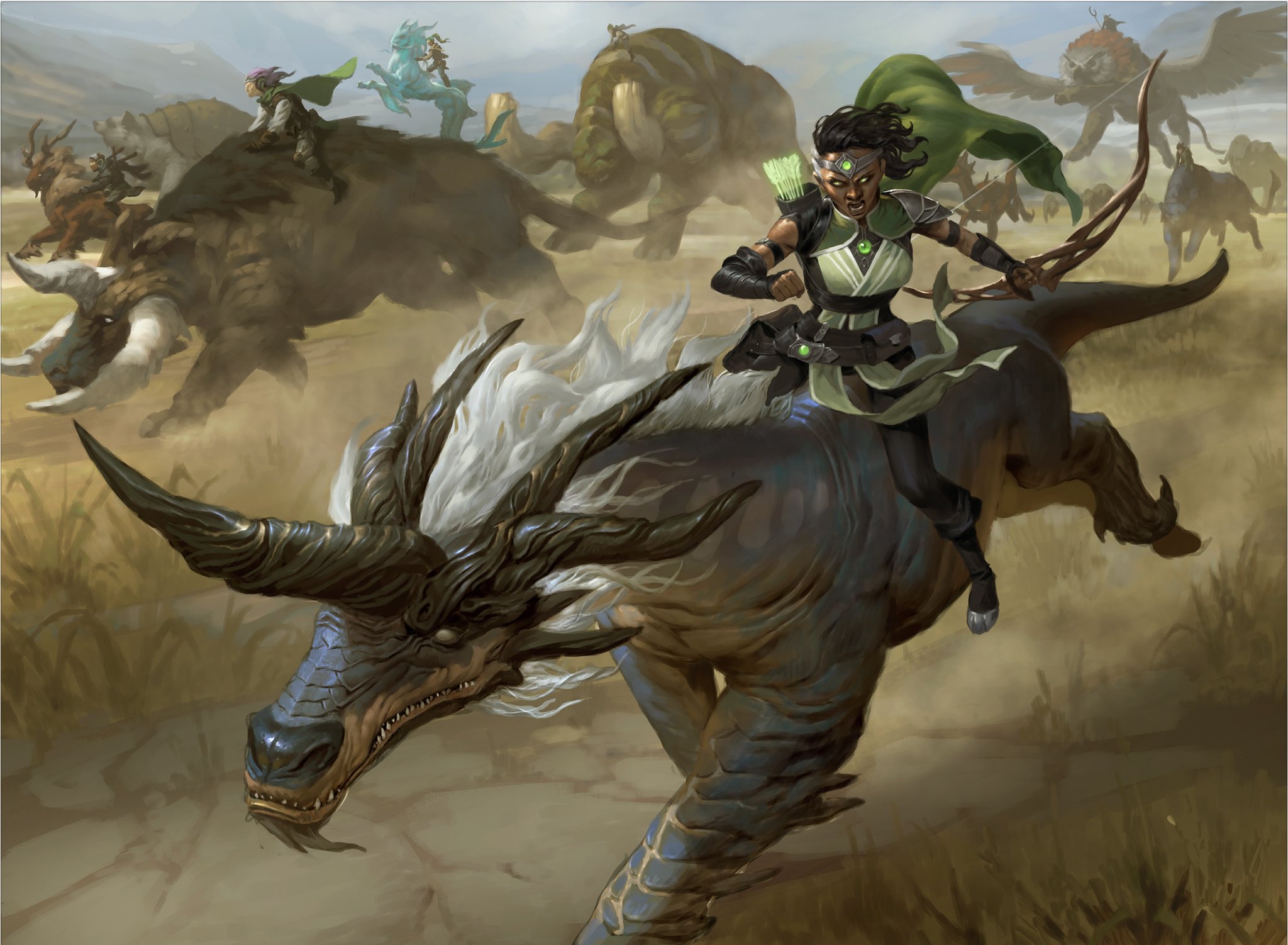 Lead the Stampede by Lius Lasahido

Lukka, Coppercoat Outcast discovers that he is a bonder, someone capable of forging a metaphysical connection with the monsters of Ikoria. Bonders are forbidden in his home city of Drannith, and his own people quickly turn on him. He's rescued by Vivien, Monsters' Advocate, but when they investigate The Ozolith, the source of the magic that has been influencing monsters to be more aggressive, Lukka attempts to take the power for himself and return to Drannith with a monster army at his back. Vivien teams up with Lukka's ex-fiance, Jirina Kudro, and stops Lukka with the help of the bonders. With her father, General Kudro of Drannith dead, Jirina takes control of the city and begins allowing bonders into the city.

The events described here take place in the novella The Sundered Bond. 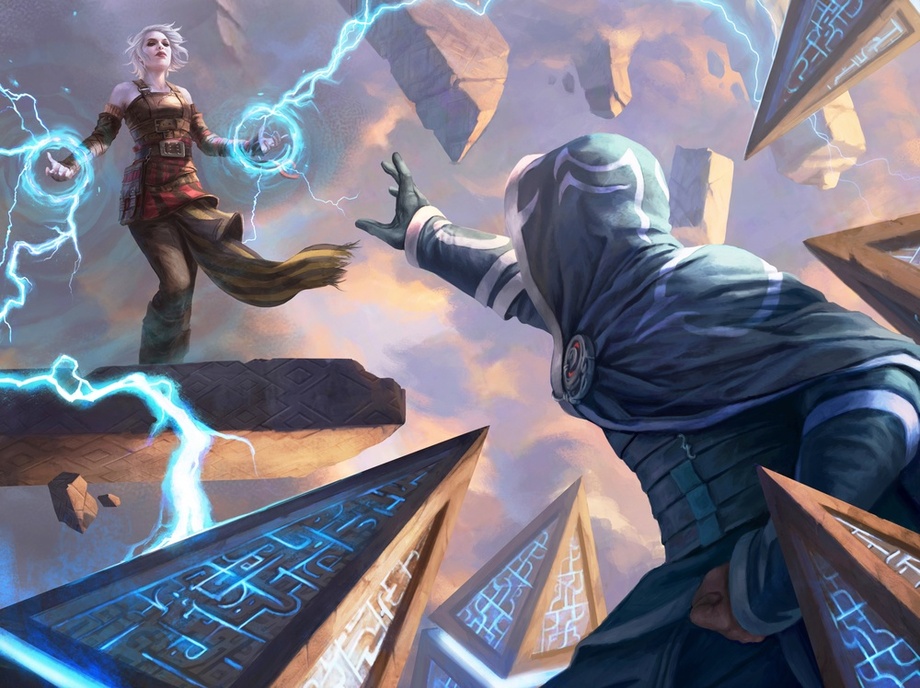 Nahiri, Heir of the Ancients and Nissa of Shadowed Boughs find themselves at odds over their roles as protectors of Zendikar. Nahiri wishes to use the ancient lithoforming technology of her people to end the Roil and restore Zendikar to what it once was, but such a thing would destroy the Zendikar Nissa has grown to love and be connected to. Jace, Mirror Mage attempts to mediate between them, but as the conflict escalates he manages to alienate both of them. Nahiri's plans for the Lithoform Engine are shattered. 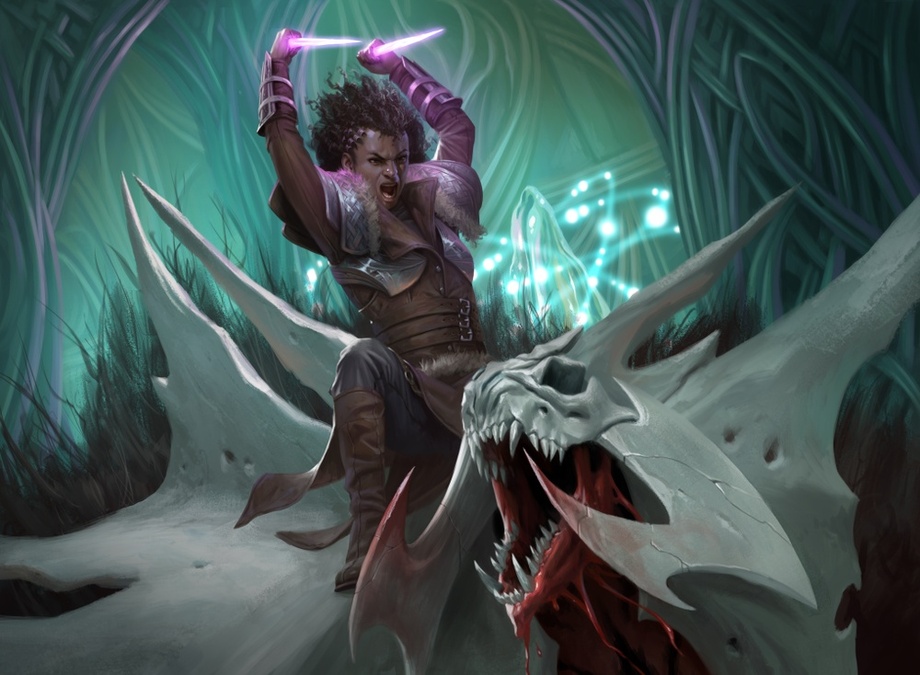 Kaya the Inexorable is hired by a mysterious benefactor to hunt what turns out to be Vorinclex, Monstrous Raider on Kaldheim. However, before she can, she, Tyvar Kell, and Niko Aris are pulled into the schemes of Valki, God of Lies // Tibalt, Cosmic Imposter, who is stirring up war between the realms of Kaldheim. Kaya and the new planeswalkers stop Tibalt's schemes, but Vorinclex is able to escape with sap from Kaldheim's world tree. 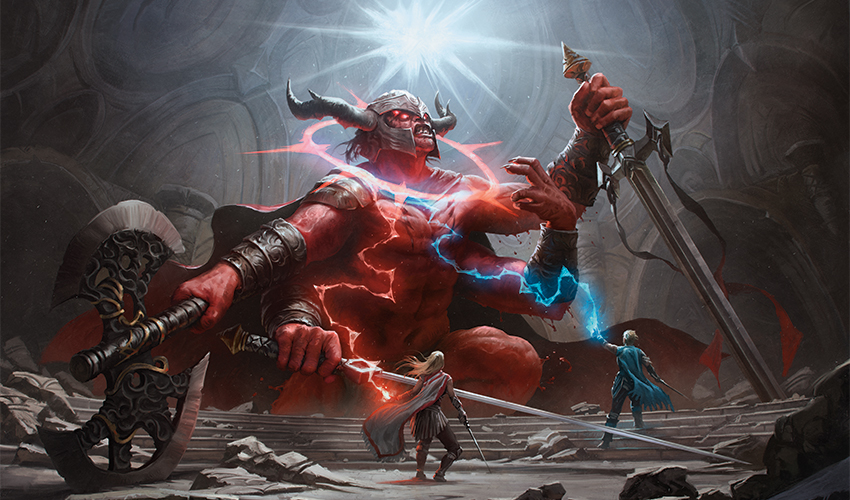 Culmination of Studies by Bryan Sola

Kasmina, Enigma Sage invites Will and Rowan Kenrith to attend Strixhaven, although Kasmina has an agenda about doing so she doesn't share with the twins. Over the course of the semester, they grow more and more distant from one another as it becomes clear they want very different things out of the university. Professor Onyx, who is Liliana Vess under an assumed name, discovers a plot by a cabal of evil mages, called the Oriq, to destroy the school. Mila, Crafty Companion // Lukka, Wayward Bonder helps the Oriq by taking control of their mage hunters and attacking the school, but he's driven off by Liliana while the twins stop the Oriq's leader. In the battle, Will loses part of his leg, and Rowan taps into an ability to channel power she hadn't previously realized she'd had. Liliana discards the alias, deciding to live as herself once more. 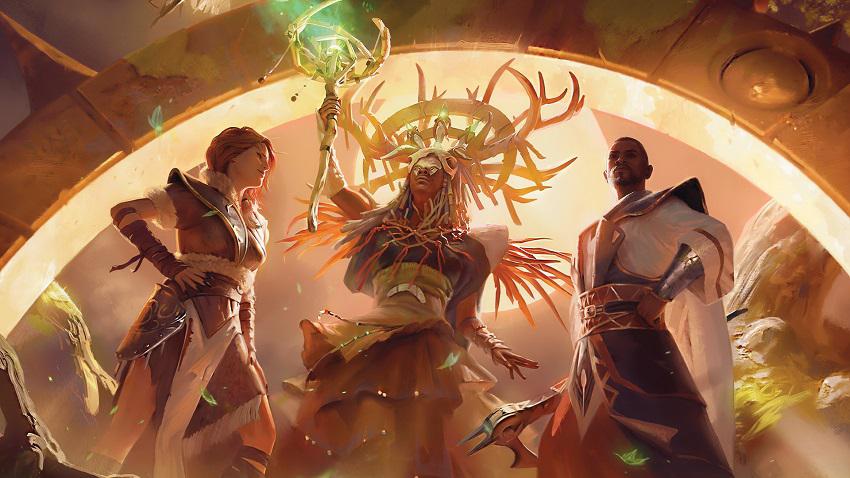 Kaya returns to the Gatewatch to tell them about what she found with Vorinclex, only for Arlinn, the Pack's Hope // Arlinn, the Moon's Fury to come and ask them for help. Teferi, Who Slows the Sunset, Chandra, Dressed to Kill and Kaya, Geist Hunter help benevolent nature witches called the Dawnhart Coven find the Moonsilver Key, which they need to enact a ritual that will restore Innistrad's balance between day and night, only for Tovolar, Dire Overlord // Tovolar, the Midnight Scourge to unleash his werewolf pack on the festival and disrupt the ceremony. Olivia, Crimson Bride arrives during the chaos and steals the key, killing the head witch in the process.

The Gatewatch, along with a coalition of Innistrad's peoples, attack the Voldaren estate during Olivia's wedding to Edgar, Charmed Groom // Edgar Markov's Coffin. The Moonsilver Key is recovered, and balance is restored on Innistrad. At one point, during their time on Innistrad, Teferi encounters Wrenn and Seven and after an initial misunderstanding, the two become friends. Kaito Shizuki has spent years searching for his lost friend, The Wandering Emperor, and hunting Tezzeret, Betrayer of Flesh. He happens upon a clue that leads him to Tamiyo's adopted son Nashi, Moon Sage's Scion. Together they investigate Tezzeret's link to Jin-Gitaxias, Progress Tyrant, finding the key to bringing the emperor home in the process. Although Kaito and the Emperor are reunited, Tamiyo, Compleated Sage is captured by New Phyrexia and turned into the first Phyrexian planeswalker. 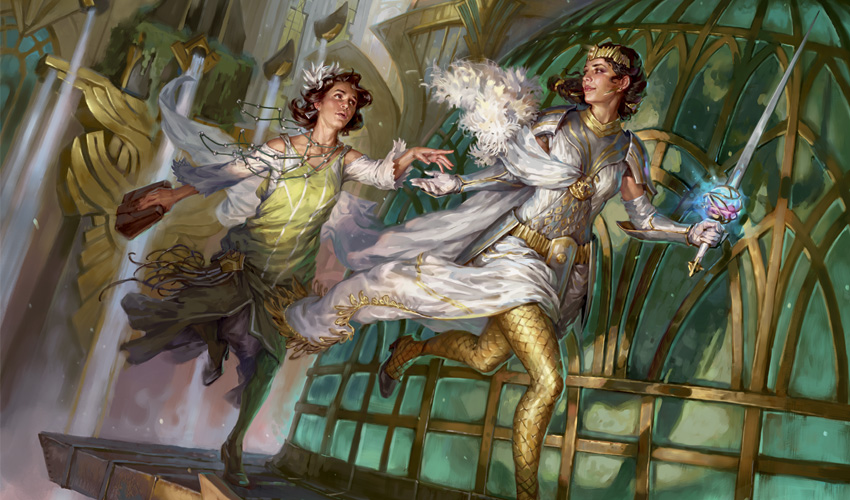 Elspeth Resplendent reunites with Ajani and is told that New Capenna may be her home plane. There was a Phyrexian incursion there centuries ago, and she decides to go and learn how they fought it off. Meanwhile, Vivien on the Hunt also arrives on the plane, and is introduced to Urabrask, Heretic Praetor, who is also investigating how the Phyrexians were defeated. The answer in both cases has something to do with Halo, the mysterious commodity on the plane. Urabrask and Tezzeret tell Vivien of an impending uprising on New Phyrexia.

Meanwhile, Elspeth gets embroiled with one of the crime families on the plane, and encounters Giada, Font of Hope. With Vivien's help, she frees Giada from the crime families just as Ob Nixilis, the Adversary launches an attack. As they flee, Giada's true nature as an angel emerges, and she gifts Elspeth Luxior, Giada's Gift to fight off the demon. In the aftermath, Elspeth and Vivien decide to track down the Gatewatch and tell them of what they learned.

Now that we're all caught up, it's time to circle back around to Dominaria! Back when I first started writing for CoolStuffInc, it was just before Dominaria came out, so it feels nostalgic to be going to back!