Back in March, I wrote a data summary article looking at explicitly large Modern events in the weeks following the Jace, the Mind Sculptor and Bloodbraid Elf unbannings. Now that these cards have had a few months to stew and be tuned within the format, I would like to look at these larger Modern events again and see how things compare to the first few weeks after the unbannings.

Before we dive into the details, though, remember that Magic data is hard to dig into in an objective manner. This is even more true when it comes to trying to construct pictures of a broad format metagame. This is because our best source of data for knowing what people are successfully playing is intentionally incomplete. For those who are unfamiliar, this piece describes how Wizards of the Coasts chooses which successful decks are posted from Magic Online data.

Specifically, WOTC only shares deck lists that are at least 20 cards different from all the other decks that are posted with that same data. This means that even if there are 100 copies of the same deck going 5-0 each week, only one of them will be posted. This allows formats that are unhealthy to appear artificially diverse.

This intentional skewing makes Modern metagame samples you see posted on sites like MTGGoldfish and MTGTop8 poor for determining if the successful decks in a format are diverse at a glance.

This means that in order for the data digest I am looking at today to be meaningful, I have looked at only large swiss Modern events. While we do not have full deck list data from these events, we do get a good number of the top finishing decks at each event. This allows us to create a moderately accurate "most successful decks" snapshot for a given period of time.

The data I am going to look at today comes from large Modern events that took place in April and May of this year. It consists of MTGO Challenge events, SCG Classics, SCG Opens, GP Hartford, and other swiss events that had at least 75 players that were reported on MTGTop8.

My full tallies included 416 data points and if you want to see my raw tallies you can find my Google Sheet here. Some things to note about my data tallies:

Even with my fairly liberal lumping of deck lists together under archetype listings, my data set for the last 6~ weeks included 59 different archetypes. This does not leave a lot of room for any singular deck to occupy a large chunk of the format, but there were seven decks in my tallies that had at least a 4% share of the top finishes:

This data snapshot mostly just validates what I've felt was likely the case from playing lots of Modern recently -- Humans is the best performing deck in Modern and it is not particularly close. In fact, if you compare this top 7 to the top 7 lists in my post unbanning snapshot, you will note that humans increased how many top finishes it put up in this new data by almost 50%.

While it is interesting to compare how the shares of just the top decks in the format have shifted between my previous data set and this one, because there are so many fringe decks in Modern that post results, looking at a more generic breakdown is often more useful in terms of determining what the top tables have really looked like: 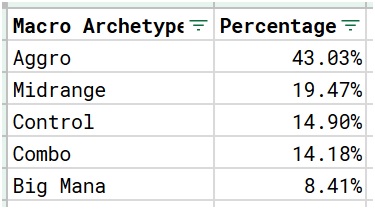 While this is still a moderately diverse breakdown, let's compare to how it looks versus the previous snapshot: 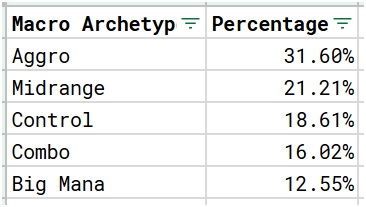 All four non-Aggro archetypes look to have lost percentage points, while Aggro gained a fairly significant chunk. Worth noting that Big Mana archetypes lost the most, which makes sense because, traditionally speaking, these decks tend to struggle against the more aggressive decks in the format.

Next, I would like to be a bit more specific -- how have Jace, the Mind Sculptor and Bloodbraid Elf specifically been in terms of numbers? Well, let's look! In the weeks immediately following their unbannings, both had fairly strong numbers without being oppressive:

Our most recent data tells a fairly different story though:

It seems that once the novelty of playing with cards that were once banned wore off, people got right back to playing with the toys they liked previously. Modern has shown that it is often a fast and brutal format. Playing cards like Jace that offer minimal board impact at a large mana cost comes at a real cost and they often are not very good. While there is a subset of games in Modern that Jace can certainly take over, there are far more where he is just not good enough.

People often ask me what I would do with the Modern banned list if I was given the power to manage it. I was once of the opinion that a heavy handed approach to sculpting the format would be best. Today I think I was a bit wrong about this. Modern is a format where people get to do wacky things that they love with lots of sweet cards. It is a format that on average is brutal and efficient. These efficiencies alone go a long way toward policing the format into being a reasonable place.

With this in mind, if I was allowed to make changes to the Modern banned list today I would not ban anything. Instead I would free a bunch of sweet Magic cards. While every card on this list is certainly powerful, I think they are also in line with the power level of the existing Modern format. The format was a different place when these cards were banned and I think it is worth giving them all a chance again.

I would unban all of these awesome cards:

I have no doubt in my mind that there will be people posting in the comment section of this article letting me know how all or some of these cards are too strong to unban. The same types of arguments were made when we talked about Jace being unbanned and right after his initial unbanning. Lots of Magic players -- including many very good ones -- thought he would take over Modern.

All of those players were very wrong.

Much like Jace, I think these cards are powerful and will certainly see play in Modern. What I don't think is that they will be oppressive. Before you try to formulate arguments to me about how Green Sun gets Dryad Arbor and Stoneforge Mystic fetches a fast Batterskull please remember the following things:

I never expected Jace to ruin Modern as a format. If I am being honest though, I thought he would have more impact that he has ultimately ended up having. If there is ever a TCG case study on the fact that power level of cards is format contextual, this unbanning will almost certainly be one of the most prominent points in it. It is important to remember that just because a card is good, or even busted, in Standard / Legacy / Format X does not automatically mean it is going to be that powerful in every other card pool.

Modern has survived powerful cards like Jace, the Mind Sculptor and Bloodbraid Elf. I hope that sometime soon we will be able to say the same about other powerful cards that we have not been allowed to play with in a long time.