Spoiler season is the best time of the year, right? It comes so often but it always feels so good when you're in it. For the many years I have been writing I have never been given a spoiler card to preview. Today, that changes! Thank you to Wizards of the Coast for this free preview content!

Before I tell you what the card is I want to play a little game and see if you can guess it:

Take some time to think about it. I think it's the best kind of reprint for a Masters set. It's a card that is playable but isn't expensive but could get more expensive because of other cards being reprinted. I often write about how reprints can positively impact the price of the card being reprinted but negatively affect related cards. This is one of the reprints that doesn't look like it is needed but is just early and should be welcome. 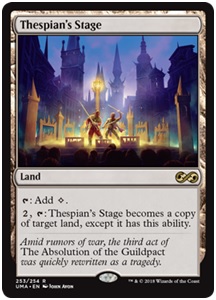 Currently Thespian's Stage play is limited to Commander decks and Dark Depths Legacy decks. While it's not a particularly exciting card alone, a lot of its supporting cast is being reprinted and will be a great buy. Typically this card is in the same decks as Life from the Loam and Dark Depths, both of which are being reprinted. Turbo Depths decks are approximately $3,000 and approximately $1,800 worth of it is made from reserve list cards Bayou and Mox Diamond. Thespian's Stage is integral to the deck but none of these reprints will really have a meaningful impact on the price of that deck. Where it will shine most is in Commander decks and especially players that enjoy foils. Foil Thespian's Stage is $18 and will likely be a more manageable $8-10 after a reprint. If you are a Commander player looking to grab this three-card Green graveyard combo, I think this set will have a big impact on the price of all cards involved. Even if you can't play Life from the Loam, Crucible of Worlds is pretty affordable and the abundance of powerful flipped lands from Ixalan leads me to thinking that people should be playing a lot more Thespian's Stage than they currently do anyway.

If you're a collector, there are a few things to note about this version. It's the first one with the colorless mana symbol instead of a number, it's got the same art and flavor text as the original, and is the first printing with the holographic stamp. I know that may not matter to a lot of people but I think making the choice of which version of a card to play is something people do a lot more than they realize.

Thanks for joining for my first Magic preview card. I'm hopeful I get more because I have like 2,000 words worth of "Thank You" ready for an Oracle of Mul Daya reprint!