Nobody likes getting their spells countered.

You build your deck or gameplan around a particular element, only to see your opponent tap two Islands and just say no. As such Blue players, and control players in general, have this general disposition of being smug and controlling. I know, I often am one.

However, when a White deck counters your spell? All bets are off!

While the combination of Boom // Bust and Flagstones of Trokair has been a thing since Time Spiral Block Constructed, I've been working on this list for over a year and it continues to impress me. 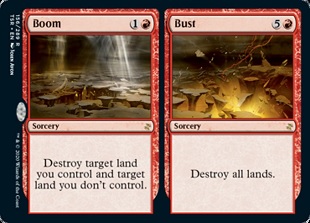 At its core, Nahiri Boom is a land destruction deck. That is, it's main purpose to deprive your opponent of the pleasure of playing Magic by killing their lands before they can do anything relevant, then killing them before they can find their way out of it.

A Boom on turn two is the primary draw here, as targeting your own Flagstones of Trokair, Cascading Cataracts, or Darksteel Citadel removes the drawback of needing to kill your own land. This gives you a bona fide two-mana Stone Rain in a day and age where Wizards of the Coast won't even print a 3 mana Stone Rain. This is great on the draw and backbreaking on the play, where it curves into your three-mana land destruction effects in Pillage and actual Stone Rain. The latter is a full playset because sometimes finding two Red mana on turn three can be a bit of a snag, but the ability for Pillage to pick of artifacts is very relevant.

Backing up this land destruction is a trifecta of one-mana interaction, which is extremely important for keeping your opponent off balance. Lightning Bolt needs no introduction, but the underplayed Oust gets prime time play here as an answer to Noble Hierarch on turn one or a 10/10 Death's Shadow on turn five. The life gain is actually a benefit against Death's Shadow decks rather than a drawback. Path to Exile would of course be pretty out of place in a land destruction deck.

And of course, our spotlight card is Mana Tithe. Force Spikes have always been all right in constructed, but they risk going dead too quickly to usually be worth it. Well, when your entire deck is built around constricting your opponent's mana Mana Tithe looks much more like Counterspell than Force Spike. The flexibility of Mana Tithe being able to tag anything from Birds of Paradise to Karn Liberated is huge and a big draw to the deck.

Of course, we need to win the game too! One of the areas where prison decks struggle the most is actually closing games. If you give your opponent too much time, they will eventually draw out of your land destruction, so closing the game is a must.

Enter Nahiri, the Harbinger. Nahiri is a one card combo with one copy of Emrakul, the Aeons Torn in your deck, as you fire off the ultimate and deal 15 to your opponent while annihilating six of their permanents. Nahiri goes ultimate in only two turns, while also providing a ton of utility as a very reasonable planeswalker as well. She is by far the best win condition for the deck in such a small package.

Chandra, Torch of Defiance doesn't need much introduction as it's also a phenomenal card with an ultimate that can win the game. Chandra, Acolyte of Flame is a bit more obtuse, but performs very well as a cheap threat that can flash back land destruction or removal as needed, as well as push your other walkers to ultimate faster.

The last, newest, and perhaps most exciting piece for the deck is Cleansing Wildfire. Pointing Cleansing Wildfire at your opponent's lands to kill key non-basics like Urza's Tower or just kill a land entirely if they're not playing basic lands is awesome, but Cleansing Wildfire also functions amazingly on your own indestructible lands just like Boom // Bust. This turns it into a mega Rampant Growth, essentially a two-mana Cultivate that often draws a spell. This can ramp you into your planeswalkers or into our safety net in Wrath of God, which helps to shore up aggressive creature matchups which can get in under your land destruction.

Lastly, don't be afraid to cast Bust! If you can keep the board relatively clear, playing Bust with a planeswalker in play as well as a Cascading Cataracts or two is a huge, game ending play.

The biggest dangers for Nahiri Boom are decks that full of cheap spells that can invalidate our land destruction, or decks that don't really need to cast spells in the typical way. Our sideboard seeks to address these issues, as we are not afraid to board out our three-mana land destruction spells and morph into a Boros Control deck.

Fast creatures and Burn are a problem, so we're packing heat. Timely Reinforcements is a powerhouse against Burn or Prowess, giving you the time and space needed to get your bigger planeswalkers and removal online. Celestial Purge pulls double duty here, as it is a great removal spell against aggressive decks as well as Death's Shadow decks which can be especially problematic because their mana curves are so low. Lastly Anger of the Gods can come in to compliment your Wrath of Gods.

Dredge and other fast graveyard decks can be a problem as well, because they realistically don't even need to cast spells to win. Relic of Progenitus is our graveyard hate card of choice as it is cheap, efficient, and draws you a card. We can't play Rest in Peace because of how it interacts with Emrakul, the Aeons Torn. Normally, if we draw Emrakul and don't want it in our hand, we can just discard it to Nahiri and it will shuffle back into our deck. With a Rest in Peace in play it would just get exiled. Anger of the Gods is also lights out against Dredge.

Against more controlling decks or even combo decks, Goblin Rabblemaster comes in as an additional threat that kills very quickly and is totally different than the other threats in our deck. The additional planeswalkers are great against slower decks, with Chandra, Awakened Inferno and Boil being knockout punches for Control decks.

This deck has done nothing but impress me for well over a year now. Between the pseudo-Divination of Cleansing Wildfire and the planeswalkers it has a surprising amount of card advantage for a Boros deck, with a solid plan and a very clean finisher. It also has the benefit of just pounding on Tron and Primeval Titan decks.

Plus, you get to Stone Rain your opponent into oblivion! What could be more fun than that!