They're reasonable, perhaps slightly underpowered, fair decks that are fully capable of winning a normal game of Magic, but also have the ability to execute a powerful combo when needed either to provide for fast and unexpected wins or to bring themselves back from the brink when they are behind. In many ways the mere threat of their combo finish is more dangerous than the combo itself, forcing their opponents to play scared and make bad trades. It can also lead opponents to oversideboard for the combo element, ripe to fall prey to the fair plan.

About three years ago, the best deck in Standard was a very difficult to pilot

deck based around good value creatures, the format's best midrange engine, and a combo finish that revolved around bringing stuff back from the graveyard.

Despite differences in composition and how it actually wins, the Four-Color Dreadhorde deck that has been making waves in Standard lately is eerily similar to the Four-Color Rally decks of old. It plays some of the best fair cards in the format, while simultaneously looking to execute a big combo finish that will end the game. It attacks from many angles and the flexibility it has it what makes it so difficult to play against.

Let's break the deck down into its component parts:

It's no secret that Wildgrowth Walker, Jadelight Ranger, and Merfolk Branchwalker are quite the trio. Not only do the explore creatures help you to make your land drops, dump a few extra cards into the graveyard, and allow you to both attack and defend early, but they fall right into the deck's main plan of simply trading resources in the early and mid game. Against aggressive decks they help keep you alive, and against slower decks they can come down quickly and allow you to start pressuring and getting ahead so you can get your planeswalkers and eventual Command the Dreadhorde engine going while your opponent is off balance.

Getting ahead is important because of part two:

While your explore creatures won't often get the job done all by themselves, what they excel at is setting the stage for phase two: your planeswalkers. Planeswalkers are a card type that is at its absolute best when you are ahead, which ideally is exactly where you will be after an early game full of explore creatures. Each planeswalker has the ability to effect the board the turn it comes into play, hopefully allowing you to continue to press your advantage.

Teferi, Time Raveler is one of the best cards in Standard and worth the hassle of the White splash. Not only is Teferi an amazing tempo card that helps you to both not die and get ahead, Teferi also provides you with incidental insurance against counterspells. Having Command the Dreadhorde countered sucks, and Teferi makes sure that doesn't happen at an extremely low opportunity cost. Teferi is also awesome bring back with Command the Dreadhorde to effect the board right away.

Vraska, Golgari Queen and Sorin, Vengeful Bloodlord are both solid midrange planeswalkers that do a lot of grindy work necessary to keep up in the midgame. A lot of times Vraska will come down, kill something, and then get attacked, but a Lightning Helix that can come back from the graveyard is totally fine in this deck. She also handles small planeswalkers well too. Sorin plays amazingly well with the explore package, giving you extra copies of Wildgrowth Walker or your explorers, while also gaining you a lot of life for big Command the Dreadhordes for when it's time to go off.

Speaking of going off...

Now this is not a combo deck in the sense that it kills your opponent immediately when it goes off, but most of the time any sufficiently large Command the Dreadhorde will create an impenetrable board position that is not only almost impossible to lose from but can be recreated at a moment's notice.

The true core of the combo lies in your explore package, as Wildgrowth Walker is the card that not only gives you the life to play with when you first cast Command the Dreadhorde, but also all the life you spent on it back and more as you return Wildgrowth Walkers and explore creatures along with whatever else you are getting.

Tamiyo, Collector of Tales also ends up in this section because of how well she plays with Command the Dreadhorde. Unlike the other planeswalkers she doesn't affect the board when she comes into play, but she does help both fill your graveyard up and find Command the Dreadhorde, or let you recur it and cast it again letting you play small, value Commands in the midgame for only a small amount.

The deck also has a few flex spots which can be shaped by what the metagame is currently looking like.

Massacre Girl has bounced around from the sideboard to the maindeck, as it's only super effective against creature heavy decks like White Weenie or decks that are heavily invested in mana creatures and Nissa, Who Shakes The World. In most other matchups you are heavily invested in building a board and Massacre Girl can make that hard to do. However with Nissa, Who Shakes The World very popular right now Massacre Girl is back in the maindeck. Just having access to a single copy in Game 1s is very valuable as the deck can usually find it.

Trostani Discordant is a very effective flex card at the moment, as not only is she a good stopgap against Mono-Red Aggro but she also helps to handle Thief of Sanity, Hostage Taker, Entrancing Melody, Mass Manipulation, and most importantly the mirror. You must be aware that she can form a non-bo with your own Command the Dreadhorde - if you steal your opponent's creatures they will get them back - but by that same token she is a very good surprise in the mirror. You know you have her so make sure you play accordingly.

Trading resources is the name of the game with this deck, as it is your goal to keep your opponent busy with all of your early creatures and planeswalkers while you set up for your inevitable endgame.

Your explore creatures are wonderful for this, providing mild pressure and great defense, so do whatever you can to get them into combat early and often. The same goes for your planeswalkers. Ideally you will be playing them when you are ahead and getting them to stick, but a lot of the time Teferi being "Repulse + 3 life" or Vraska being "Abrupt Decay +3 life" is exactly what you are looking for. Every time you block a creature or make their creature attack your planeswalker instead of you is valuable time and life you're gaining as you work toward your Command the Dreadhorde endgame.

Are you going to need to cast a huge Command the Dreadhorde to win? Will grinding it out with your creatures and planeswalkers be enough? What sort of top end threats or interaction is your opponent bringing to the table? Answering these questions will help you sculpt your gameplan.

Remember that sideboarding is an art, not a science. You will need to change and adapt this sideboard guide on the fly based on what your opponent is playing, the cards they are sideboarding, and how they are approaching the matchup.

Four-Color Dreadhorde is one of the best decks in Standard right now, and it is also one of the most challenging decks I've played in a long time. You not only need to manage a somewhat wild mana base and quirky endgame, but play out many turns with a wide swath of options available to you. You may just find yourself in a situation like this: 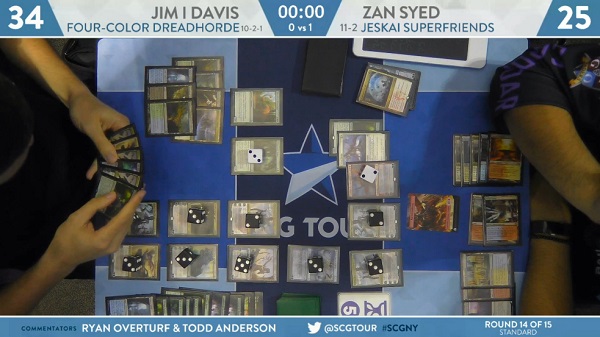 The basic rules of tempo and building your board are important, but most vital of all is having an understanding of how the game is going to fully play out and being able to move yourself toward your goal. Your plays must have a unified purpose, and that purpose is a moving target that varies from matchup to matchup.

A four color deck that is challenging but rewarding to play, very powerful, and uses a card previously thought to a bulk rare to amazing effect? Sign me up!