How to make Standard a good format:

Step 1: Ban everything until Solemn Simulacrum is playable. 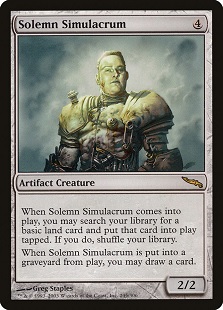 It's really that simple!

We've got a vibrant and active Standard format on our hands that only seems to be getting better with each passing week. Rather than feeling compelled to either play the busted deck or try and beat it, many decks have risen and fallen in this time frame and there's no clear answer to what the "top deck" currently is. It is honestly a breath of fresh air after a year or so of soon-to-be-banned cards running ramshackle over everything.

The three main pillars of the format are Embercleave decks like Gruul, Rogues decks (with and without Lurrus of the Dream Den), and various flavors of Yorion. There are also food decks, graveyard/sacrifice decks, and ramp decks also floating around as well. But recently a new deck has arisen, one that pushes for a new pillar in Standard:

It looks like playing fair is back on the menu!

Ugin, the Spirit Dragon is the format's ultimate top end and working toward it by playing interaction, the card draw of Mazemind Tome, and the ramp and card advantage of Solemn Simulacrum is very nice. But what's most interesting is the color choice to pair it with. The seemingly obvious options are the more controlling colors; Blue for card draw or counterspells, White for sweepers, maybe Black for removal. Or maybe we want Green for some ramp, to get Ugin our faster?

The answer is Red.

Sound weird? Well, yes, but once you put all the pieces together it starts to make a lot of sense. With the format revolving largely around creatures of various types and lacking any sort of huge over-the-top effect like Omnath, Locus of Creation or Hydroid Krasis, sitting back and grinding your way to Ugin makes a lot of sense.

The removal is certainly there, with Bonecrusher Giant being one of the best cards in the format and not dead against creatureless decks. Mono-Red even gets a very serviceable Wrath of God effect in Storm's Wrath, which is an all-star against Vivien, Monsters' Advocate, the best planeswalker left in the format. What really throws things over the top however is the removal and utility you get from your lands.

The modal double faced cards, or spell lands, have been one of the most impactful new mechanics in Magic in a long time. They fundamentally change how we build our decks and Big Red Control is no different, with Red showcasing two of the best. Spikefield Hazard is likely the best non-mythic spell land, giving you extra removal built right into your mana base that has additional utility against graveyard cards like Skyclave Shade, while Shatterskull Smashing is also probably the best of the mythic spell land cycle, offering up pseudo-mass removal.

One of the biggest issues that control decks have is they need to play a lot of lands so they can make all of their land drops up to their big spells, but can't afford to not have good spells in the late game. Having eight of your lands also be spells is huge. But that's not all!

Crawling Barrens is creeping up on everyone as one of the best creature lands printed in a long time. Serving a similar purpose to Raging Ravine in Modern Jund, Crawling Barrens just hangs out among your lands until you and your opponent have spent most of your resources, then comes alive and ends the game quickly. It can attack planeswalkers, plays great with Ox of Agonas, and survives any Ugin sweep.

Radiant Fountain is one of my favorite cards and just more value from your lands, offering you a nice buffer for very little cost. This deck only has 12 lands that do nothing but tap for mana, but boasts an astounding virtual land count of 28!

But of course, this is all for nothing without the big whammy.

Ugin, the Spirit Dragon is the headliner here, making everything you are working toward possible. With the format being heavy on effects that play to the board, Ugin is the ultimate endgame, providing you an almost universal answer to everything in the format as well as a victory condition. You will ultimate Ugin a lot with this deck! If your opponent doesn't concede first of course.

But the big kicker here is Irencrag Feat. Mostly a meme card or a piece for Goblin Charbelcher decks in older formats, Irencrag Feat casts Ugin on turn five which is usually enough to end most games. Normally this would be very inconsistent, but with the rest of the deck doing a great job at buying time having a control deck with a "nut draw" is very appealing. Furthermore, both Shatterskull Smashing and Crawling Barrens provide worthwhile mana sinks for Irencrag Feat when you don't have Ugin handy.

The last important piece is Ox of Agonas. Red decks typically have problems with drawing cards, which can mean they struggle into the mid and late game. There aren't any Chanda, Torch of Defiance-type planeswalkers currently in Standard to work up to that provide card advantage, which gives Ox of Agonas a very important role - play your cards, kill your opponent's stuff, and then reload. The body is certainly relevant, while the escape cost also means that you hopefully won't run out of things to do if the game goes really late. The fact that Ox of Agonas is also great against Rogues is just icing on the cake.

So, when you put it all together, you end up with deck that is fairly straightforward but very effective.

You've got a thing to do and you do it well. It's just good, honest Magic in an age where that doesn't usually feel like enough. Well I guess, turn five Ugin isn't that honest, but who's counting.

The sideboard seeks to address the weakness the deck has to decks that are light on creatures and heavy on counterspells. Realistically, decks with lots of counterspells are going to line up well against Big Red Control. Trying to play Irencrag Feat into a big spell isn't a winning strategy when your opponent has Negate in their deck, so we get to change things up for Game 2 and three.

As we learned in our How To Play Around Counterspells article, one of the most important ways to get ahead of a control deck is to pressure them and get under them. This is not something our maindeck is really capable of doing, but we've got Robber of the Rich and Phoenix of Ash ready to come to the rescue. When added alongside Bonecrusher Giant and some modest Solemn Simulacrum beatdowns, they present an aggressive force that turns you into an aggressively slanted midrange deck that also features some card draw and bigger elements. Robber of the Rich has an opportunity to create card advantage as well, while Phoenix of Ash is durable and hits harder as the game goes on.

This sort of transformational sideboard is the perfect plan for this deck, allowing you to modify your deck on the fly when you are at a strategic disadvantage.

Soul-Guide Lantern fills out the sideboard as an excellent tool against both escape-based decks as well as Dance of the Manse-based Esper decks. The opportunity cost is super low, and because it cycles so well you can use it as a sub in any time you have dead cards in your maindeck that you don't really want.

The sideboard is rounded out with a few Chandra, Heart of Fire and a handful of extra removal spells.

Chandra, Heart of Fire has impressed me, as she is a non-creature, non-graveyard threat that can provide card advantage as well as some extra persistent removal. Red does struggle to kill larger creatures sometimes, where Chandra can help you double up and kill that larger toughness creature while only casting one spell.

What Will They Think Of Next?

Mono-Red Control may sound silly, but I assure you this deck is the real deal. It had been floating around a few weeks ago with a Rakdos splash, but has really been making the rounds again in the last few days as a more straightforward and consistent Mono Red deck.

Plus, you get to cast Solemn Simulacrum and draw cards, what more could you want!