I think it's hard to debate the fact that Urza, Planeswalker is the most powerful planeswalker ever printed. 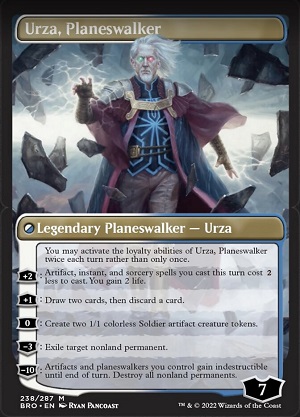 Sure, you could try to cite Ugin, the Spirit Dragon or maybe Nicol Bolas, God-Pharaoh, but it's hard to argue that once Urza, Planeswalker is actually on the battlefield, there is none better. Urza not only does actual everything, from killing things to drawing cards to gaining life to making threats, but he gets to do it twice a turn, with a huge starting loyalty. A few turns with Urza in play should turn almost any game into a formality.

Of course, the trick is getting it in play.

All Urza, Planeswalker's competitors have the advantage of being on a single piece of cardboard, not two, but the reality is that both Urza, Lord Protector and The Mightstone and Weakstone are both very reasonable control cards that curve perfectly together.

Urza blocks well, doesn't get hit with Cut Down or most Red removal, curves into a turn four The Mightstone and Weakstone, but most importantly cost reduces almost all of your spells. Casting Negate or Destroy Evil for one mana is excellent, as is making X spells like March of Otherworldly Light or Silver Scrutiny more efficient. And even The Mightstone and Weakstone is a reasonable enough card to just cast when necessary.

At its core though, this is a Farewell deck.

Farewell is one of the most powerful, albeit difficult to use, cards in the format, and pairing it with planeswalkers is the perfect place to be. Being able to mop up midrange boards of Fable of the Mirror-Breaker // Reflection of Kiki-Jiki and random creatures is awesome, while also being exceptional against true aggro decks.

If you love control and going big, Urza is your man!