The Simic Combine, the Blue and Green guild of Ravnica tasked with the preservation of life and nature - usually the ones not well suited for the urban life of the great city. In the process, the guild doesn't object to providing some... improvements on life. In Dissension, Momir Vig tried to force these changes on Ravnica, causing the guild to fall in standing until later being brought back to form by the likes of Zegana and her merfolk kin. Life continues to evolve and change on Ravnica thanks to the Simic and as such there's plenty to explore in this week's Advanced Jumpstart. 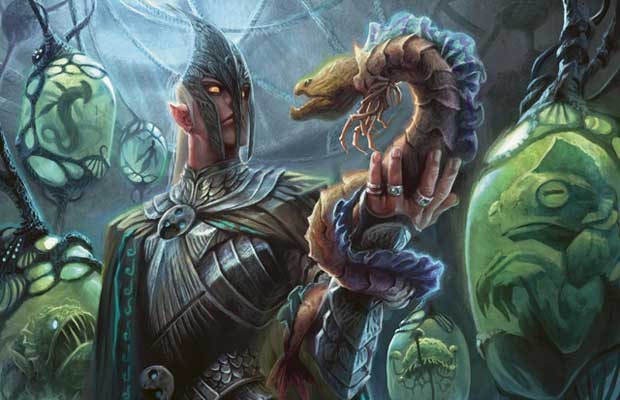 It's time to break out the dice as we go in on Dissension Simic!

Graft, the Simic mechanic for Dissension, is a really weird one. It triggers whenever any creature enters the battlefield - including your opponents! Generally, the latter part of that isn't something we necessarily want to do, but it really makes cards like Cytoplast Manipulator and Experiment Kraj work spectacularly well. Kraj doesn't do much when it comes to yoinking abilities from your creatures, since they can target themselves more or less, but it's advantageous at stealing opposing creatures' abilities if they have them.

Thankfully, the other graft creatures have pretty great abilities. Plaxcaster Frogling and Sporeback Troll both offer your creatures fantastic protection. One gives shroud so your creatures can't be targeted by spells or abilities and the other regenerates so your creatures aren't likely to die. Just remember to be careful, though, as you can't regenerate a creature once it has shroud! The last graft creature is Novijen Sages, which lets you draw cards by removing +1/+1 counters. Not getting very many counters from graft? Not a problem! Just use an Evolution Vat to really juice them up.

The various graft creatures aren't the only things Simic has to offer, though. In fact, there's tons of other good value creatures. Coiling Oracle and Trygon Predator are both very efficient cards at an incredibly low rate. Coiling Oracle either ramps you or draws you a card for a whole two mana while also giving you a body. Trygon Predator, meanwhile, is a classic for repeatedly blowing up artifacts and enchantments when it hits your opponent's face. Even if they don't have either of those, it's still a 2/3 flyer for three mana, which is a fantastic rate. And if the small bodies don't do the trick, there's always the classic powerhouse of Simic Sky Swallower to get the job done! Best of all, each of these creatures can be found with ease thanks to the guild's leader, Momir Vig, Simic Visionary.

Unfortunately, Momir's reign as guild leader didn't last too long. He was taken out by Argus Kos, his pet Kraj torn apart by Rakdos, and his guild left in ruins by his unspeakable actions of forced evolution and change among the citizens of Ravnica. It wasn't until the merfolk emerged from the deeper regions of the plane that the Simic regained their former glory, and that leads us straight into Gatecrash!

Building for Gatecrash (and Dragon's Maze) is actually a bit difficult for a couple of reasons. For one, Simic was actually one of the more underpowered guilds of the block. Evolve wasn't quite as good as it seemed in a Limited setting and, while it got far better in many different formats otherwise, wasn't all that great in a format dominated by the Boros. As it turns out, when we can build the packs ourselves, things get a little better. It's not as perfect as many of the other guilds in the block, but that's fine when it can work well enough with other packs alongside it.

Here you won't find any Experiment Ones or Cloudfin Raptors that you have to take from a super low power to a higher one. You can kick it off hard with cards like Gyr Sage and Simic Manipulator only to beef them up hardcore with cards like Renegade Krasis and Vorel of the Hull Clade. Even dropping a Fathom Mage at four mana is still likely to generate you absurd amounts of card advantage!

To help you get your creatures the counters deserve, we have the likes of Master Biomancer to make all future creatures that much larger, thereby triggering evolve effects. And if that somehow doesn't do the trick, we can cast a Nimbus Swimmer as big as we want to ensure we get our triggers. While we want to use it more on opposing problem creatures, Rapid Hybridization can also be used in a pinch as a way to both put a big creature on your board and set off evolution in the process.

Let's see how the guild continues to evolve into Ravnica Allegiance!

Ravnica Allegiance has some of our most beloved - or reviled, depending on which side of the fence you're on - cards in recent memory. Remember how much you loathed Growth Spiral? And Hydroid Krasis? Well, they're getting their love here! After all, it's really hard to show off the Simic of Ravnica Allegiance without including two of the strongest cards over the last couple years. But thankfully they aren't front and center in the set. No, that is, in fact, adapt.

Adapt lets our creatures get big and monstrous, and has plenty of power in the process. Some of these cards are quite innocuous. It's hard to believe at times that Benthic Biomancer is a rare when it can only adapt once, turns into a meager 2/2, and loots you one card. As it turns out, though, sometimes that's enough. It gets even better when you put it alongside Skatewing Spy to give it a little flying upgrade, or you can use it with Biomancer's Familiar to adapt an extra time and loot even more.

We also have Incubation Druid for ramp, Sharktocrab for a big beefy meme that taps down opposing defenses, and Zegana to give all our big critters trample in addition to drawing a card on entry. If adapt wasn't enough, we've also got some great value spells as well. Applied Biomancy gives great reach in combat and Frilled Mystic is like a better Mystic Snake to counter problematic spells while leaving you with a body in the process. Last but not least is Biogenic Ooze. While not a Simic card by way of watermark, it's hard to deny that this is clearly one of the Combine's creations, and is well deserving of making an appearance here.

Now let's slam them all together as only the Simic can do!

Simic is one of the best guilds of Ravnica when it comes to value, and it's best when you throw as many of the best value cards all together in one pack. Some of these cards aren't perfect by any measure, but they all work together quite well with one another. Benthic Biomancer, for example, seemed kind of meager of an effect in that last pack, but here it's rarely bad when you can combine it with the likes of Vorel or Master Biomancer. There's not so much graft or evolve here, but that's fine when we're aiming for more value - which a lot of those cards simply don't offer much of. Instead, the key is to find the couple best and mix them with cards that improve our +1/+1 counters or else have sweet effects like Coiling Oracle or Momir Vig himself.

And that wraps up Advanced Jumpstart with the ten guilds of Ravnica! Next week I'll be coming in hot with my Pauper review for the awesome new set Kaldheim, but I'll no doubt have plenty more Advanced Jumpstart in the future. In fact, I've got a nice long list of themes I'm working on building so please make sure to let me know in the comments below what kinds of packs you'd like to see later on. Until then, may your creatures grow ever larger, and ever mightier.