Demons are such a fickle bunch. You make one lousy little deal and suddenly your soul is damned for all eternity. What a ripoff! Some demons don't care so much about deals, though. Some just want to kill all things and cause as much chaos as possible. 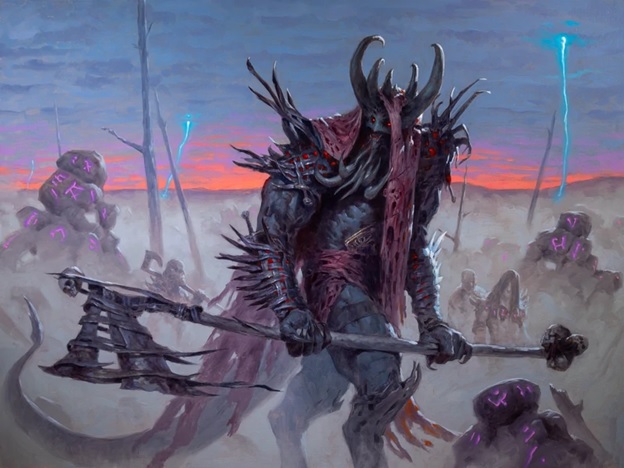 The poor guy just wanted bring some pitiful humans under his wing and lead them on a killing spree across the realm of Bretagard. Then, as they made their way to Beskir Hall, Varragoth found himself in combat with the gods for an entire month! When the dust finally settled, they sent him back to Immersturm. How unfair!

Over the years, Varragoth turned his rage and ferocity into a bitter hatred of the gods and Bretagard. Then, as chance would have it, Tibalt arrived and caused a massive Doomskar - opening the way to Bretagard once more. With numerous demons in tow, he went on a killing spree once more before eventually being felled by the planeswalker Kaya.

Varragoth was a mighty leader of demons, one for whom the darkest of songs are sung about. As such, I felt it appropriate to make use of his tutor abilities on his card and make a deck filled to the brim with tons of powerful demons.

The plan here is as simple as it sounds: assemble a critical mass of powerful demons as quickly as possible. There's a bit of a hitch, though: many of them are quite mana-intensive. In fact, the majority of them are at least five mana to cast. That's why we're running a few mana rocks, cost reduction artifacts, mana doublers, and even some reanimation spells as well. The deck doesn't even need that many thanks to Varragoth's tutor ability, allowing us to find whatever we need when we need it. We can even forego many of the expensive mana costs thanks to Dream Devourer allowing us to foretell our demons, thereby paying a little bit up-front.

There's also a number of great options to fill up the board. Things like Bitterblossom, Pack Rat, and Piper of the Swarm are great ways spit out tiny creatures to block with or else get sacrificed to the machinations of the mighty demons. This can be by using something like Victimize or Whisper, Blood Liturgist to bring some big baddies back from the graveyard, or else to fuel the ravenous hunger of Razaketh to quickly find more of what you may need.

And if you don't want to win with the all-in on demons plan, I've come up with another take on Varragoth.

I suspect several people are going to want to use his boast ability much the way people use Maralen of the Mornsong to quickly cheat out instant win-cons and win games fast. That's not really what I'm about here. I'm trying to play things more on the casual end rather than try-hard my way at the next table I play at! Instead, I sought to get creative with a simple idea: chaos.

Demons love to wreak havoc on unsuspecting victims and that's precisely how this deck plays. It's about as chaotic as one could hope to make a Mono-Black deck. In fact, I think that makes things even more fun. Here, we get a lot more straight-forward, if more painful, cards than Red - the usual chaos color. Chaos there is known for headache-inducing cards like Warp World, Grip of Chaos, Radiate, and more. It's often difficult to resolve and takes forever to figure out.

In Black, we're generally dealing with more cards like Painful Quandary, Choice of Damnations, Endless Whispers, and Bottomless Pit. In fact, I ended up leaning in a bit more on some artifacts to give to your opponents to make them hurt. These might include Crown of Doom, Jinxed Choker, and Jinxed Idol. There's even a bit of random chaos that's masked as group hug. We're talking things like Gate to the Aether, Omen Machine, and Timesifter, all of which create some craziness that can benefit your opponents along the way.

There're even more ways you can make this fun too. You can play this deck the normal way, by using Varragoth's boast ability to find what you need when you need it. Alternatively, consider this instead: when you activate his ability, pull six cards out and put them face down. Then, you roll a die to decide what ends up back on top of your deck. You get something you want, but you add a bit more chaos into the mix at the same time!

Truth be told, this deck is absolutely something I'm dying to try out with friends as quickly as I can. It feels like exactly the kind of deck I'd enjoy that makes things miserable in just the right kind of way. It's wild, crazy, and chaotic - just the way a demon lord like Varragoth would want it.

I hope you get to try both lists out for yourselves and have a wicked good time with this sweet Kaldheim legendary. Until next time!