It's another year and that means another sweet set of powerhouse Commander decks courtesy of Commander 2021...or is it Strixhaven Commander? I can't keep these names straight anymore after last year's major Commander decks had as many as four different names depending on where you looked, but that doesn't matter so long as the quality is good. Last year's decks were great and I really feel this year's was no exception.

One that really grabbed my attention was the Blue-Red deck Prismari Performance. 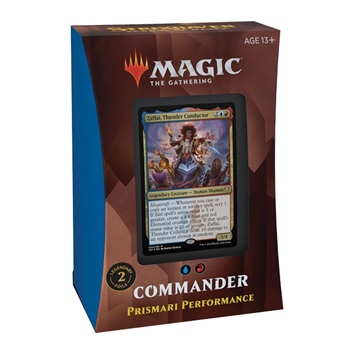 Yes, yes, we all know about how Zaffai is the Thunder Conductor and the Thunder Collector, but that shouldn't take away from how good the card is itself. Zaffai brings the beats, either setting up your draws nicely, making an army, or going in for the kill with some massive direct damage. It's truly befitting of the grandiose artistry the Prismari loves so dearly. In fact, it's absolutely my jam. If I were to find myself on Arcavios attending Strixhaven, Prismari is definitely where I'd be applying first.

For how good the deck is, though, I thought we could do a little better. Some of you out there may recall that some of my very first articles had to do with upgrading a set of Challenger Decks into something a little bit more playable than they were right out of the box. I thought it'd be great to go back to my roots a bit and see just what we can do to make this deck even wilder than it already is. Let's have a look at the original list and then see what we can do to upgrade it.

For as much as I really like the deck and how it looks, it's clear there were some stinkers in the mix. After all, it's a Commander precon. Were you expecting a top tier, fully tricked out deck straight from the get-go? No, that's not how WotC does things, after all!

The first thing I did was touch up the mana base. After all, Commander precons have always been pretty atrocious with their lands. Tap lands? Temple of the False God? Get them out of here! Generally, I filled things up with a bunch of the typical Blue-Red lands you might expect, but added a few others. The Biblioplex and Boseiju, Who Shelters All make for some pretty great lands to slip in for a deck that cards so much about casting instants and sorceries. And while I don't think we need four cycling lands for our deck, adding in a Castle Vantress to still help smooth out draws is always welcome.

But the lands are the easy part. Take out the garbage tap lands, put in a shock land and a check land and such and we're good. The tricky part comes with identifying bad non-land cards and finding either appropriate replacements or else decent cards that can fill the hole. For example, Traumatic Visions and Fiery Fall were never that good of cards, and are here to largely fill things out and act as ways to get lands. Seething Song, while a good card in its own right in many formats, just isn't that good of a Commander card when it's one of exactly two ritual spells in the deck. And then there's Elementalist's Palette, a new Commander card found only in this deck. This card is really cool and in the right deck - like Rosheen Meanderer - can be downright bonkers. In a deck like this with exactly two spells with X casting costs, however, it's just bad.

With all this in mind, I set to work. I took out the less desirable cards and looked for big bad bombastic spells to put in and make the deck more epic than it already was. Here's what I came up with:

We're playing this deck to go big or go home! That's what I really loved about the original list is that it's as bombastic and epic as one could hope for with a main Commander named the Thunder Conductor. The original list did a great job and all, but we needed to go just a little bit harder and heavier. Putting in spells like Shark Typhoon and Thousand-Year Storm really add a powerful wallop to our opponents with our number of sick spells already in our arsenal.

On top of the many fantastic cards already on display, adding a couple over-the-top pieces seemed like a solid play. This includes cards like Crackle with Power and Comet Storm, both of which scale as needed for Zaffai thanks to how mana values work when it comes to X spells. We also add in Sea Gate Restoration and Shatterskull Smashing because, while they can be tremendous spells in their own right, they can also serve us quite well as lands in a pinch.

There also seemed to be a dearth of ways to really close out a game at times, and we bring in cards like Murmuring Mystic, Young Pyromancer, and Saheeli, Sublime Artificer to help build an army. Talrand's great and all, but having additional options is big game. Guttersnipe also brings the beatdown hard. And remember those rather unnecessary ritual effects I mentioned earlier? I think we can do a similar thing but better with cards like Baral, Chief of Compliance and Goblin Electromancer. And of course, if we really need some strong finishers, sticking in a God-Eternal Kefnet and a Niv-Mizzet, Parun will get the job done just fine.

And that about does it for this one. Many of these upgrades are wonderful and fairly inexpensive, and I think it can make for one explosive deck. If you want to take an already excellent deck and make it that much better, take this list for a spin at your next Commander game. May you shock all of your opponents with a dazzling display of cacophonous splendor befitting of the Prismari school!