In June 2019, Wizards of the Coast dropped on us a bombshell of a set: Modern Horizons.

This set was absolutely unheard of at the time, as a set that could allow for new cards to enter the Modern format while bypassing the requirement of going through Standard first. The set completely changed the face of every format that could play the cards. Modern was obliterated by Hogaak, Arisen Necropolis for months. Similarly, while it wasn't as obscenely dominant as Hogaak, Wrenn and Six tore up the Legacy format and, much like Hogaak in Modern, quickly saw a ban in that format.

The set even gave us the innocuously powerful mana filtration device known as Arcum's Astrolabe. Whereas Hogaak and Wrenn and Six were both only banned in a single format, Arcum's Astrolabe was banned from both Modern and Legacy, as well as my format of choice, Pauper. While Arcum's Astrolabe was simply strong and made mana a little too good in Modern and Legacy, it was the wild west in Pauper. Not only were people playing whatever they wanted simply because the card existed, but players found ways to take even further advantage of the Astrolabe by combining it with cards such as Ghostly Flicker, Glint Hawk, and Kor Skyfisher for absurd draw engines.

Even when Arcum's Astrolabe was removed from Pauper, Modern Horizon's impact was still felt quite strongly on the format. Here's a small number of the cards that have and continue to see play in the format today:

Even beyond these cards, we're still seeing cards end up being tremendously playable. Case in point Putrid Goblin.

It turns out when you combine the otherwise mediocre goblin with a card like First Day of Class and a sac outlet, you suddenly have a combo going on. The deck's already been putting up some results in Magic Online challenges and I expect that to only continue as players continue fine tuning it.

Now Modern Horizons 2 is soon upon us and if it's anything like the first one, we're sure to be in for a wild time with tons of powerful cards. Fetches, Counterspell, Diamond Lion, and that's all just for starters. Today, I have for you three sweet new common cards to show you from that set, courtesy of the awesome people over at Wizards of the Coast. Let's check out the first one, Arcbound Mouser! 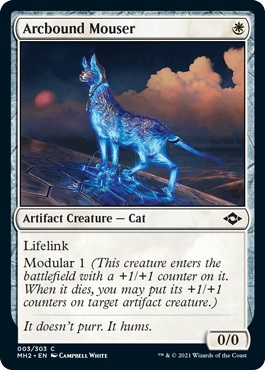 This card is obviously a reference to Arcbound Worker, being a one-mana artifact creature with modular 1. It also has some amount of similarities to the many lifelinking cats we've seen in recent years, such as Sacred Cat, Charmed Stray, and the various tokens made by creatures in the Amonkhet block. This card seems a bit innocuous at first and begs the question of how good it can even be. After all, most artifact decks already have Arcbound Worker and the decks that want Sacred Cat want it because they can bring it back in a pinch, thereby avoiding Edict effects.

If there's a probable home in Pauper for this card, though, it's probably in something like the various Jeskai Metalcraft decks we've seen floating around. Play this as a small creature, gain some life, and fuel your other creatures. It's also possible that having this as copies of 5-8 of Arcbound Worker alongside Atog just happens to be enough to really fuel up some big creatures and win the game. Fling the Atog and, oops, that didn't work so might as well Temur Battle Rage whatever big creature is left.

Arcbound Worker has also seen play in various Hardened Scales lists in Modern and it's not too much of a stretch to see this being playable there as well. And while the colored mana makes it a bit of a tough sell, perhaps it can be good enough to warrant as an inclusion if Affinity decks ever manage to see a resurgence. One can only hope!

Now let's check out another sweet card in Rift Sower - a nod to Time Spiral classic Search for Tomorrow! 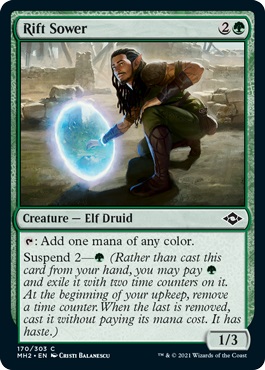 Kendra getting to preview a common elf?! You know it!

When I first read this card, I was somewhat perplexed. My initial reaction was why would a deck like Elves ever want to play this over the many other dorks the deck already features? Turns out on that first read, I missed the part where this creature taps for any color mana and not just Green like Llanowar Elves, Fyndhorn Elves, or Elvish Mystic. That changes things quite a bit, as a card like this can really help you cast cards like Distant Melody, Harsh Sustenance, and various countermagic - all of which are frequently played in the deck.

It's hard to say just how many you want to play of this card, though. Given the fact it takes a few turns to come into play, it's not always likely that you'll want to suspend this card immediately on turn one. After all, with Elves, there's so few lands that you often rely heavily on having access to that second mana ASAP. Still, I think it's a really cool card that's going to have some amount of play. I also have to imagine that it'll see play in other decks, like the cascade ramp decks, as a way to hit multiple colors while ramping.

I also feel like this card's impact will hardly be only felt in Pauper. The set is Modern Horizons 2 for a reason, and while it's possible Modern simply doesn't need this effect with so many other options in the mix, having something like this can help a ton. The format will still probably want the card this one is referencing thanks to Valakut decks, but it's still a reasonable option for, say, Jeskai Ascendancy. If not in Modern, then this will undoubtedly be a budget Cube and Commander staple until the end of time.

I'm very excited to see what the card ends up doing, but I've got one more for you all today! Check out Bone Shards: 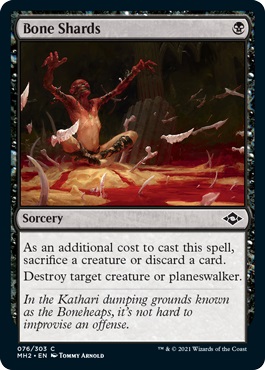 Of the three cards here, Bone Shards seems like the most impactful, and not just for Pauper either! Sorcery speed removal may hurt the card a fair amount, but Bone Splinters - which this is no doubt a reference to - already sees play from time to time, or at least has in the past. As it happens, Bone Shards looks to be a far more powerful card thanks to one little line of text: "or discard a card."

There's a lot of decks that like sacrificing creatures but there's even more that like to discard cards. This makes for a really easy way to get cards into your graveyard for a deck like Reanimator or Tortured Existence while also taking out your opponents' creatures. There's likely also quite a bit of play in combining this card alongside the newly previewed Kitchen Imp. While it's obviously playable in Pauper in some capacity, it's no doubt playable in other formats as well where Reanimator and Dredge strategies like to fill their graveyards as quickly as possible. Pitching a Griselbrand while blowing up the problem creature that just hit the board? Don't mind if I do!

I have to imagine Wizards knew the card's potential for those older formats, as they also gave this card the beautiful retro card frame treatment. Check it out: 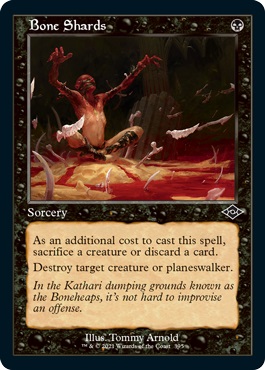 You'll be able to get these sweet old school copies of Bone Shards from all kinds of booster packs of Modern Horizons 2. There's even going to be some snazzy foil-etched treatments inside collector boosters! I know when I go to pick up my copies of this card for my many decks, I'll absolutely be going in exclusively on the retro frames. As the definition of a paper boomer, having been playing this game for 21 years, I was a sucker for them with Time Spiral: Remastered and I'm a sucker for them now!

That about wraps things up for now! But that's not all! Make sure you check out my fellow CoolStuffInc.com author Mike Flores and see what sweet cards he has to offer as well. They might just appeal to you Pauper fans out there as well!

Last but not least, I'd like to take a quick second to say thanks to Wizards of the Coast for these free previews. They absolutely rule and I feel so grateful to have been able to share these with you all today. And if you want to get your preorder on for some sweet Modern Horizons 2 product, might I direct you to the various products currently offered on this fine website you're visiting right now? If you're new here, you should definitely check out those customer rewards too because they're really a lifesaver.

In the meantime, make sure you check out all the other stellar content creators and all the excellent previews they bring you along the way. I'll be back in a few weeks to review every single common in Modern Horizons 2 in the context of the Pauper format, much like I did with the first set. It's already been a wild ride thus far and we're just getting started! I can't wait to see what other powerhouses we'll find in this set soon enough.