I've been a big fan of Pioneer since it was announced as a format and did quite a bit of messing around in its early days. I messed with decks, looked at what was going on, and tried out different things. It felt like a really cool and different way to play Magic for a while, and then we got the double whammy of problems with the format.

With the release of Theros Beyond Death came a handful of cards that proved too much, between Thassa's Oracle, Underworld Breach, and Heliod, Sun-Crowned. This left a sour taste in a lot of peoples' mouths and made players less eager to play. On top of that, the pandemic followed shortly afterward, ending the majority of paper play for a long time and the momentum that the format had been building. With the format not being on MTG Arena - and still apparently on hold due to Historic's popularity - the last bastion of the format ended up being Magic Online. The problem there, however, is that Magic Online is a bastion for so much other already well established formats like Modern and Legacy that players would rather play those than Pioneer.

This has left Pioneer in a very strange spot over the last year and a half, with the format being left in limbo with few areas to play. The format did see a minor resurgence thanks to the banning of most of the major combo decks that had been arguably tearing up the format and causing events not to fire, but even then, things have been rough. With the pandemic slowly starting to wind down a bit, people are more willing to get out and play at their local game stores again, and Wizards clearly wants to help jolt some life back into the format again. Enter the Pioneer Challenger Decks. 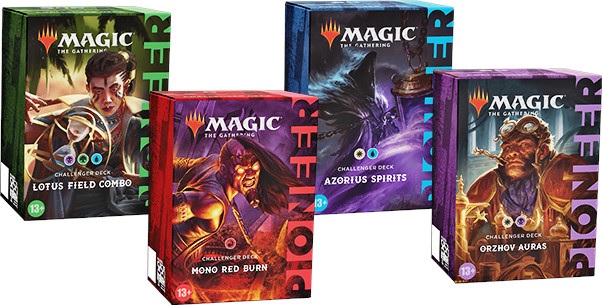 The idea here is that Pioneer as a format is much cheaper and closer to Standard than something like Modern, so it's easier to make something like a Challenger Deck for. Some may recall the Modern Event Deck that flopped super hard a number of years ago. The problem there was that even then, many Modern staples were already pricey due to lower printings and higher desirability with Legacy. Couple that with only one deck being released that wasn't terribly meta, and you have a dud product.

Pioneer isn't as beholden to that, with the recent years' releases being printed heavily and thus lowering prices on singles. With the structure of variety Challenger Decks provide as well, this opened the doors for what Wizards could do and allow people to get into the format a bit more. With this run of decks - marketed as the 2021 versions, indicating the possibility of more in the future - we have four archetypes represented. These include Lotus Field Combo, Mono Red Burn, Azorius Spirits, and Orzhov Auras.

Today I'll be talking about the Lotus Field Combo list and the Azorius Spirits list, with the other two following next week. Let's start with one of my personal favorites: Lotus Field.

For the most part, this is actually a pretty accurate representation of the Lotus Field archetype! This was a deck that primarily functioned early on thanks to Underworld Breach and Thassa's Oracle but continued to be good even after those two were banned. Turns out that even without those 2 powerful cards, the combo of Lotus Field and cards like Hidden Strings and Pore Over the Pages is good enough to keep it going. Most of the key cards are well represented here and even the mana base is pretty rock solid. For as much as Temples get frequently derided in precons, here they actually serve a purpose, filtering your cards to get you that much closer to your combo pieces.

Let's look at an actual tournament list for comparison:

The non-land part of the main deck is strikingly close to the precon, which is great. The only real changes are the four Opts going away in favor of 2 copies each of Wolfwillow Haven and Bala Ged Recovery // Bala Ged Sanctuary, which most players should have a few copies of. Even the lands don't need that much upgrading, and can be started with just a couple copies of either Barkchannel Pathway // Tidechannel Pathway or Botanical Sanctum to start if you can't afford the full sets.

The biggest thing that needs an overhaul is the sideboard, which makes some amount of sense given how the deck functions overall. Thanks to Fae of Wishes, Lotus Field Combo relies heavily on the sideboard to find critical win conditions as well as potent cards to help stop whatever your opponent is doing. A well-timed Anger of the Gods, for example, can wipe out an opponent's board and buy you the time that you need to be able to combo off.

The biggest aspect the sideboard is sorely lacking in is a good win condition. Because of how much Lotus Field Combo tends to sift through its deck, it's not difficult to end up drawing to the bottom of your deck. This is why Jace, Wielder of Mysteries is such a critical piece to the deck and is normally the way you will end up winning. The Approach of the Second Sun that the precon comes with is probably fine as well, but is harder to get going in certain situations between the mana cost (which can be relevant even in a deck like this) and having to draw even further into your deck. Some lists have also run Banefire as another way to win if Jace gets dealt with somehow.

Other aspects of the precon sideboard are generally fairly generic solutions that can work one way or the other, such as with Sweltering Suns over Anger of the Gods. Omniscience is probably a little over the top for a deck like this, but can be fine should you want to mess with it, as I believe older lists have run it in the past. The one selection that feels tremendously out of place, however, is Shifting Ceratops. I'm guessing it was included as a way to push through control matches more easily, but even then, it's just a dumb beater that might ultimately not get you there. Niv-Mizzet, Parun is far better both as an uncounterable beater and turns into a simple and straightforward win condition by simply casting spells if left unchecked as well. He's a simple and cheap pickup as well, so it should make an excellent upgrade out of the gate.

All told, the Lotus Field Combo precon is one of the best values for a deck that you could hope for. It's less represented in the meta these days but is a fun deck to help kickstart your adventure into the land of Pioneer.

Now let's check out the second archetype I've got to go over: Azorius Spirits.

Now this is a deck that needs some serious work. The big problem here is that the land base is just horrid and is a pretty far cry from what you'd want in a deck like this. Glacial Fortress is fine, but the Temples are downright unplayable! There're even more questions, like why is there a Brazen Borrower here - something that doesn't see play in this archetype at all? This could easily have been removed in favor of another Spell Queller - which has too few inclusions - or some better lands.

Here's what an actual Azorius Spirits lists looks like:

Lands aside, the precon is fairly accurate, but still has issues. The lack of notable cards like Skyclave Apparition and Rest in Peace really adds to the amount that you'll need to upgrade here. On top of that, there's also the addition of several Innistrad: Midnight Hunt cards that have come out since then. It wouldn't surprise me too much to see more powerful tools show up in the upcoming Innistrad: Crimson Vow either. As such, this makes upgrading this list much pricier than the Lotus Field list, though still oftentimes more affordable than many Standard lists and certainly costs less than the majority of Modern decks.

However, the issue is that while Azorius Spirits is a fine way to play Pioneer, the main way the archetype is typically played is with Bant Spirits, and that comes with a much higher price tag. Not only do you need to upgrade more or less the same cards as with the Azorius list, but you also need more lands - including the expensive Breeding Pool and Mana Confluence - and a full playset of Collected Company. The result is a much pricier list requiring far more extensive upgrades. Here's a list for example:

Once again, this list still features much of the same general creature base. A few choices have been changed up both in the main deck and in the sideboard (you'll notice the copies of Selfless Spirit and Spectral Sailor here, unlike the Azorius list) but by and large it's pretty comparable. The biggest difference is in the lands, which of course is the bulk of the price. My recommendation if you were to upgrade from Azorius to Bant Spirits would be to first pick up your copies of Collected Company and then Mana Confluences alongside some Barkchannel and Branchloft Pathways to give yourself a solid base and then build the rest up from there.

As it happens, Spirits is also a popular Modern deck, so it's not hard to take this as a basis for a deck in that format as well. That version is much pricier thanks to cards like Aether Vial, Cavern of Souls, and Force of Negation showing up frequently as players, but can be something to work towards if you want something beyond Pioneer in the long run. Alternatively, if you want a cheaper upgrade that is in some ways a downgrade, you can check out this Mono-Blue Spirits list that went 8th in a recent Pioneer Challenge on Magic Online:

This list is dirt cheap, and thankfully you should have a large chunk of the cards from this list. Many of the others are commons and uncommons you can get at a bulk or otherwise affordable rate. The Faceless Havens and Snow-Covered Islands take up the majority of the list's price tag at a whopping 3/8ths, but even then it's likely that you'll have a bunch of Snow-Covered Islands floating around. Even if you don't, they're not that hard to get thanks to Kaldheim and can probably get picked up fairly easily simply by asking a friend even.

And there you have it, two fairly solid entries into Pioneer and a great way to get your foot in the door with the format. I know I personally am looking forward to grabbing a copy of the Lotus Field Combo precon myself so I can have something to jam at my local events as they start to open up once more. I'll be back next week with the other two lists - Orzhov Auras and Mono Red Burn - so be sure to check back then!