Today I wanted to share my ongoing testing process for the NRG Series 10K team event on November 27. The format is Team Modern, Legacy, and Sealed. There are plenty of angles to prepare for this event outside of deck selection.

My team consists of RIW teammates, Raja Sulaiman and Zach Allen. You may remember them from my recent Modern 2.3K report where we all made the top 8. 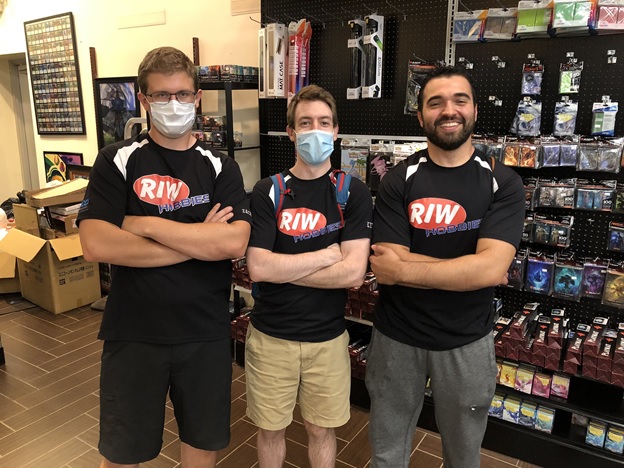 I've worked with Zach and Raja on plenty of decks in the past making the team chemistry strong.

Let's go through the format for each member on the team. Zach is on Legacy, I'm playing Modern, and Raja will try his hand at sealed.

We are directionally preparing for the event as there will be another set release, Innistrad: Crimson Vow. This affects our limited preparation and Modern may be influenced. Legacy will likely remain the same outside of a B&R announcement.

If you're familiar with Zach's work you will know he loves a good control deck. It was a natural fit for him to take the Legacy seat because he has been playing Leagues and staying current with the format. He also recently made the Top 8 at a high stakes Legacy event in Columbus.

The current deck to beat in Legacy is Izzet Delver. Zach prefers control decks, but there are some decks that are too good to ignore and join the bandwagon. As a responsible teammate I need to take a deep dive into Legacy to learn if clever play is enough to swing the matchup with a more reactive deck.

I watched Twitch streams of Izzet Delver as well as other archetypes to get a feel for the format. Since Izzet Delver is so popular I've seen both points of view in several matchups and the deck feels very beatable.

Izzet Delver only plays eight maindeck counterspells and the four Dazes can be played around. Make sure you mulligan hands that are susceptible to Wasteland. Make no mistake, Izzet Delver is a strong deck, but I wouldn't play it if tempo decks aren't your cup of tea.

Deck selection is critical in team events. Not only are you playing for yourself, but also two other people. If you are going to deviate from the norm you should get a sign off from your teammates.

I've been working with Zach on Legacy to solidify a control deck. We each have our own ideas on how to build the deck. Here's what I would register if the tournament was tomorrow:

The core idea of this deck is to control the game with Force of Will, Swords to Plowshares, and Prismatic Ending to draw out the game and generate card advantage with Uro, Titan of Nature's Wrath.

A key deviation from the stock build of Bant Control is building around Life from the Loam instead of generating card advantage with Sylvan Library. Enchantments used to be difficult to interact with, but the landscape has been changed by Prismatic Ending.

There's also a popular Four-Color Pile created by Anurag Daas that generates card advantage with Expressive Iteration in a Bant shell. The cost to playing more cards in your fourth color is not being able to interact with lands.

I've been happy with Life from the Loam. It can recur Wasteland against Dark Depths and Urza's Saga or add additional lands to your hand to fuel Brainstorm. Dredging can help clear the top of the deck for Brainstorm or fill the graveyard for Uro.

Life from the Loam helps protect your single Volcanic Island after sideboard. Most four-color decks should have a second Red source because Izzet Delver is a deck where Pyroblast shines, but plays four Wasteland.

A single Field of the Dead helps go over the top in control mirrors. Four copies of Uro ensures there are more extra land drops to make Zombies faster. Since traditional control decks aren't playing Wasteland, the Field can be difficult to remove.

The entire mana base is designed with Field of the Dead in mind. A split between basics and snow-basics help diversify land names. There's a fringe deck playing Predict so you also gain some percentage with different card names.

The last utility land for Life from the Loam is Mystic Sanctuary. The single Terminus can be added to the top of the deck, but it will mostly just target Swords to Plowshares or Brainstorm. It helps keep the momentum in the mid game and has exceeded expectations. Zach and I were sorely missing the card in an earlier draft of the deck.

Karakas is in all of the Bant-based Control decks. The most popular use for Karakas in Legacy was to bounce Marit Lage tokens and Thalia, Guardian of Thraben. Ragavan is now the main target and you can also bounce your own Uro with the sacrifice trigger on the stack or save it from exiling removal.

Teferi, Time Raveler is less popular in Legacy, but overperformed. Remember you can bounce Urza's Saga; a play right out of Modern.

Speaking of Modern technology, Bant Control was the first big deck to adopt Dress Down. You can cast it at the end of turn two to stick an Uro the following turn. Removing creature abilities is great against Death and Taxes as well as Elves. Doomsday is one of the top combo decks that wins the game with a creature, Thassa's Oracle.

Endurance is a catch-all threat that plays well in Legacy. It rarely wins the game by itself, but helps this reactive deck cover all of the bases. It's able to flash in and block Dragon's Rage Channeler much like in Modern.

Control mirrors come down to Uro coming back repeatedly and Endurance can help clear out the opposing graveyard. Since you are churning through the deck quickly Endurance can also help avoid decking.

Rakdos Reanimator is a very powerful deck that is able to put a Griselbrand on the battlefield on the first turn and play an Unmask to clear the way. Endurance provides additional redundancy to interact for zero mana.

I've seen many lists that play three Carpet of Flowers in the sideboard, but Life from the Loam makes it less important. Izzet Delver can't interact with a cheap enchantment outside of countering it. A savvy Delver player will fetch a Mountain or leave them uncracked until they're needed to keep the amount of Islands to a minimum.

Death and Taxes is a popular paper Legacy deck because it doesn't require a playset of a card that costs over $500. Even the Yorion version of the deck costs less than $1,500 in total which is very impressive considering Legacy decks average $5,000. I want a Terminus in the maindeck because this creature deck will be played for practical purposes and two more in the sideboard.

Court of Grace is like a third Jace against slow decks. It's possible I want a second Court in the sideboard to swap for Jace against Izzet Delver as it steals the monarchy from the opponent which can come in handy against Court of Cunning. A White enchantment dodges Flusterstorm and Pyroblast. It's easier to play around Daze after sideboard with Carpet of Flowers.

The Surgical Extraction can be a third Endurance, but I want a more efficient graveyard hate spell in the board. The 3/4 body of Endurance is more relevant after sideboard against Izzet Delver when they become the monarch with Court of Cunning. I can Surgical Extraction Life from the Loam against Lands or a big creature against Reanimator.

Collector Ouphe is a 2/2 clock against Storm where it shuts down Lotus Petal and Lion's Eye Diamond. It's also a very strong effect against Mono Blue Echoes.

I'm going to take my Legacy testing a step further and play a 1K next month with Bant Control. It has been a long time since I've been able to sling paper dual lands and I'm excited to game.

The overall objective to get acquainted with Legacy is to help Zach with slight tweaks to the decklist, but I don't plan to help with game play at the team event. A big downside to playing Bant Control is the propensity to draw. Luckily the Field of the Dead helps create inevitability in the matchup that is most likely to go to time.

Zach, Raja, and I are all familiar with Modern. I've been liking two decks so it's not clear which one I would register if the tournament was tomorrow. Grixis Dress Shadow and Temur Rhinos have both been treating me well. They are both proactive decks that are difficult to effectively fight.

I've been making subtle changes to Temur Rhinos over the last couple of weeks. Here's the list I would register:

Most of Temur Rhinos is set in stone in my mind:

This locks in 28 out of 36 spells leaving us with just eight flex slots.

1 Cryptic Command - I have found myself wanting to draw to this singleton. It's a fifth counter against decks where Force of Negation shines or it can tap opposing creatures to swing for the win with Rhino tokens. A second copy could be clunky, but I've been very happy with one.

1 Dead // Gone - I don't want to play more than one in the maindeck, but I've been happy drawing it against Ragavan. It's a fifth bounce spell for Murktide Regent, but Cryptic Command can also do the job against the Delving Dragon.

1 Murktide Regent - The single Murktide continues to pull its weight. A second would have diminishing returns much like the rest of the flex slots.

2 Bonecrusher Giant - The 4/3 body is still relevant even if Stomp doesn't trade 1-for-1. I basically swapped the third Bonecrusher for the Pyromancer. Double-red can be tough on the mana early in the game making Bonecrusher still desirable. Even though Bonecrusher and Seasoned Pyromancer are both 3-drops the Bonecrusher provides turn two interaction as well.

2 Prismari Command - I could play other flex spells in this slot, but it's important that Prismari Command pitches to both Fury and Force of Negation. Hammertime is still a very powerful deck and I would like to have some dedicated slots for the matchup. I'm not worried much about maindeck Chalice of the Void, but it's only weak against Cascade mirrors.

A single Endurance in the maindeck was considered, but it creates some awkward play patterns. When I have three Endurance I know to hold off on suspending a Crashing Footfalls, but one feels too random.

The other deck I'm considering is Grixis Dress Shadow:

This list might look familiar as it's the exact 75 I proposed after making the Top 8 at the 2.3k a few weeks ago. My attention has been on Temur Rhinos lately, but Dress Shadow offers more play. The downside is that Dress Shadow is significantly more complicated. I need to track a lot of information while also getting pulled into side conversations with Zach and Raja. This will be factored into my team deck selection.

I also have an upcoming Modern 1K where I'll either play Rhinos or Dress Shadow.

Raja typically avoids tier one decks and gravitates toward his own controlling brews. His strong intuition makes him a great candidate for an unexplored Sealed format. Innistrad: Crimson Vow will be released one week before the event. I plan to practice sealed ahead of the event to provide input on building the deck.

My preparation for a new Sealed format will be watching Michael Jacob stream as he's the master of the format. An upcoming Sealed star, Bryan Hohns, is also on my radar. He reviews new sets with an emphasis on sealed.

That's all I have for today. I'm very excited to be preparing for a team event as it has been a couple years since I have played in one. Legacy is my favorite format behind Modern so I'm also happy to be thinking about Force of Wills once again.