For years now, Counterbalance has been the scourge of many Legacy players, creating a soft-lock that filled the opponent with fear and frustration. After Green Sun's Zenith, Counterbalance took a serious hit, and now with Mental Misstep around, we have seen strikingly few Counterbalances over the last few months. Despair not, however, for there are people dedicated to proliferating the Counterbalance terror, men and women who want to counter everything and not only win the front played out on the battlefield, but psychologically destroy opponents as well. Today, we look at modern approaches to Countertop decks and see what insight can be gained from them.

Why Counterbalance? Why Now?

Counterbalance in conjunction with Sensei's Divining Top is such a powerful combination that many strategies are entirely pacified while itâs on the table, and even when that isnât the case, it stifles any form of development that most other decks have to overwhelm the lock. Unlike many combos, both pieces of the Countertop engine are low-cost and useful on their own, which makes them desirable. Considering that the deck has so little chaff, it should always be a consideration, but now after the dust has settled in a post-Misstep world, we can start to examine how to build a Countertop deck to trump much of the format.

The first and likely most critical step in deciding if the metagame is ripe enough to introduce Counterbalance is to take a look at the state of the metagame. There are two times where Counterbalance is strong; the first is when the metagame has a high number of degenerate decks running around that are generally weak to a control deck, and the second is when the dominant decks exist on a very low curve that is easy to prepare for. Right now, the major degenerate decks are Show and Tell and Dredge decks, which are both a bit of a problem for Countertop. On the other hand, Storm is making a resurgence, and that has traditionally been a very strong match, so the prospects arenât all bad. The other major players at the moment are G/W Maverick, B/W, Stoneforge-based aggro-control decks, and NO R/U/G, which all exist on a curve that is easily manageable, which is great news. Ideally, youâd want to lay out the curve of the most successful decks in the environment to see how well equipped you can really be to fight them, and luckily, Iâve gone through and done all of the necessary footwork to help visualize the concept.

What Iâve done is take a look at the ten largest Legacy events over the month of July and sort all of the decks that finished by cost. This is how the numbers came out: 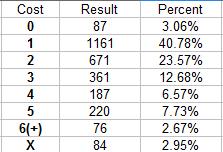 If you happen to be a person who likes to visualize things with a pie chart, I also have one of those for you: 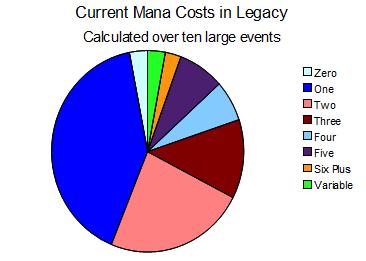 A quick word on method: Unlike a breakdown of a deck that is automated, I only counted spells in a deck that were likely to be cast during a given match. This means that cards like Emrakul, the Aeons Torn are ignored because not only are they uncounterable, but the times where an opponent actually has 15 mana are the exception, not a strategy. Also ignored are cards like Bridge from Below and many other pieces of graveyard-based combos that are never going to be cast, so considering them part of a curve is going to produce misleading results.

Once we have the numbers of the variables we can expect, itâs then time to plug them into a formula that helps us understand how to build a deck to anticipate the metagame. For the purposes of this experiment, I recalled that regardless of approach, nearly all of my Countertop decks have played twenty-three lands, leaving me with thirty-seven or thirty-eight slots for spells. What I did is take the number we expected to see per mana cost and multiply that times thirty-seven to help find a rubric for what a curve should be. Iâll present the numbers I found along with an example I list of Countertop Thopters, my favorite style of Countertop deck.

Mana Cost (# of Cards Desired for the Slot)

This brings the rough count to thirty-four or thirty-seven cards in the deck and gives us a few slots to experiment with, but we need to keep in mind where these extra cards came from. One of the cards comes from 0-cost spells, meaning that this is essentially a free slot, since 0-cost spells are painfully easy to counter with Counterbalance. Another one of these open slots comes from the need to address variable-costed spells, such as Green Sun's Zenith, and yet another from high-cost spells such as Hive Mind and Wurmcoil Engine. Keeping that in mind, I decided to flesh my deck out with the following three cards:

1 Future Sight/Counterspell (if I am going to play sixty-one, which I normally do)

The Force of Will is mandatory, and the Enlightened Tutors will give the deck the flexibility it needs to fight against a large field of opposing decks relatively easily, although this build is by no means the final word on the matter. Because there are so many different approaches with this deck and many different play styles, much of the deck can be tailored to your needs and will likely work as long as you stay close to addressing the metagame with the curve of the deck.

If you like how the metagame looks for the deck, youâre going to need to pick a plan of attack. There are several good approaches that have been placing for us to take a look at. First is what I consider to be the current standby, Countertop Thopters:

As stated, this is my favorite approach that can easily incorporate Counterbalance. If youâre not familiar with it, this deck uses the Countertop engine to keep the opponent out of the midgame while the deck establishes the Thopter Foundry + Sword of the Meek soft-lock to tie up combat. While either of these combos is generally enough to take many opponents out of the game with little effort, in conjunction, these two combos present a board state few decks are equipped to battle against. This deck is going to thrive in environments with a lot of creature-based decks such as G/W and Zoo, and is also excellent against Natural Order and Storm decks, but stock builds will struggle against Hive Mind and Dredge.

For those of you who like you play a bit more aggressively, there is a slight modification of the Thopter Control deck to incorporate Stoneforge Mystic.

These builds are going to be strongest in metagames that have a lot of control and aggro-control mirrors happening, as Stoneforge Mystic gives a tutor for a combo piece or even just another threat if needed. This build isnât going to be quite as strong against heavy aggro plans such as that of Merfolk, because it isnât as well equipped to take advantage of strong control cards such as Moat or Ensnaring Bridge, but the Batterskull plan is a relatively strong strategy that fits nicely into the plans of many players and is often just a matter of preference.

Of course, there are some who donât ever want to go for the Thopter Foundry kill and eschew it entirely in favor of more creatures. Dark Confidant and Vendilion Clique are both favorites to pair with Stoneforge, and this next list does exactly that:

This deck is an attempt to take the Stone-Blade variants that weâve seen in nearly every Top 8 for the last few months and integrate a new element into the deck. I was skeptical of the list, but as I looked at it more, it grew on me and would be something Iâd consider testing. For me, the most questionable card in this list is the Shadowmage Infiltrator, but I would have to imagine that the deckâs creator tested this slot rigorously, as there are a whole world of cards that can fit into the slot. Shadowmage is another great source of card advantage and of course is able to hold equipment quite well, so perhaps in the era of Stoneforge, John Finkelâs Invitational card can find new life.

While I chose a U/W/b build to feature, there are a number of U/W/r builds using Grim Lavamancer that have had strong finishes. Not uncommonly, these U/W/r decks are also taking advantage of other Red removal in the form of Lightning Bolt or Fire // Ice, and oftentimes using what little Red disruption is available using both Blood Moon effects and Red Elemental Blast to generate a deal of leverage against control.

Showing that Supreme Blue isnât dead in a world of NO R/U/G, this list recently made Top 8 in a 120-player event. The deckâs pilot has made some interesting choices, such as not playing Mental Misstep and playing Elspeth over Jace, which I feel are both defensible arguments. Regardless of offbeat choices, the role of Countertop in this deck isnât just to stifle the opponentâs development like it is in other builds, but to also guard your win conditions, Tarmogoyf and Rhox War Monk, which both tend to be weak to 1-cost spells.

Iâve seen a few Bant lists running around Top 8s that are playing what seems like a dated configuration of Natural Order and Countertop, but with the recent surge of popularity of NO decks, it wouldnât at all be a surprise to me to see some entrepreneur trying to take advantage of Countertop in modern NO R/U/G builds or even looking back to a slower NO Bant build that uses a toolbox of creatures and sets up for longer games.

In sounding off, I encourage you to look at some events and see if you think that Counterbalance has a place in the metagame right now. Thopters is on my short list of decks to tinker with, but Iâm still having a lot of fun and success with Reanimator, which has kept me away from several projects. Iâll be especially interested in seeing how the Reanimator list in Legacy Champs turned out. Speaking of which, Legacy legend Mark Sun @AllSunsDawn) lived up to his nickname, making Top 8 of Legacy Champs in GenCon with NO R/U/G. I was pulling for him to go all the way, but the Merfolk menace reared its head again after lying low for the last few weeks. Regardless, I wanted to congratulate him on his finish. Next week, Iâll be taking a look at the Top 8 of the event and contrasting the results of that event to what many people expected to see in this event.

~Christopher Walton in the real world

Master Shake on The Source