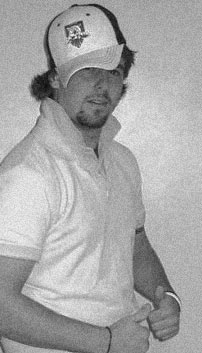 Jellico, Tennessee â Jason âMacâ McIntyre, twenty, a local Magic player, vowed on August 10, 2010, to go an entire year speaking only in Magic slang. If he can make it to this Wednesday, he will have achieved his goal. When asked for his thoughts on the feat, McIntyre responded, âGot there,â quickly adding, âTotally OP. Broken!â

When asked whether he is proud of what heâs accomplished, he replied, âStrictly better! Must be nice.â Though he is proud of sticking it out through the year, including at his brotherâs wedding and his grandmotherâs funeral, he does not currently plan on attempting the act again in the future, saying only, âGG, man. GG,â before extending his hand in a robotic manner and making a strange buzzing sound.

McIntyreâs former girlfriend, Kristen Bevins, nineteen, was asked why he decided to undertake such a monumental task. âBecause heâs an idiot,â she says. âHe told me about his idea and I told him not to do it. But he did it anyway. And thatâs why we arenât together anymore. Heâs such a jackass.â

When reminded that he still had a few days to go at the time of the interview, McIntyre replied, âThatâs unfortunate.â But he went on to clarify this statement, adding with a grin, âStill had all these.â 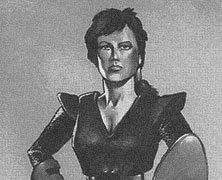 Seattle, Washington â A retired employee of Richard Garfield [creator of Magic: The Gathering] announced that her upcoming autobiography will reveal several alleged workplace abuses committed by Dr. Garfield, including what she believes to be unfair pressure to âbandâ with other employees.

During a press conference on Friday, Barbara Tirel, known to many simply by her working name, âBenalish Hero,â claimed that during her employment she was, along with most of the Magic community, deliberately misinformed as to what Banding, an unpopular and intimidating mechanic, actually was.

âI donât think even he [Dr. Garfield] knew what we were supposed to do,â says Tirel. âIt seemed like the rules were always changing. When I tried to attack with all the other creatures, I could usually only convince one of them to come with me. I remember one squire said heâd ârather date a Sedge Trollâ than follow me onto the battlefield. Dr. Garfield never punished this sort of behavior or fixed what was obviously a flawed company policy.â

The companyâs rules for a blocking band were reportedly even stranger. âWe all had to hold hands, like in the game Red Rover. It was so humiliating. The Black Knights yelled such degrading things as they rode by. Finally, around 4th Edition, I sent Dr. Garfield a memo about my role in the company as a âbandingâ hero and how it needed to change. When I got home that night, my house had been ransacked and my puppy was gone. I never saw my Timber Wolf again.â

Despite the implied threat, Tirel feels that now is the time to step forward. Her book Phantom Monster: Richard Garfield in the Workplace will be released later this month.

Tirel is currently preparing a class-action lawsuit with other banding creatures as well as the families of victims of Magicâs âfading,â âphasing,â and âhauntâ policies.

Renton, Washington â Wizards announced last Friday that it will be holding the first ever card-slamming contest in late September 2011 to coincide with the festivities surrounding the release of Innistrad. Brandon Garvey, the Wizards marketing guru in charge of the project, says WotC feels this will be a big hit with casual and tournament players alike.

âWeâre very excited about this contest,â he says. âEveryoneâs familiar with the overhand windmill slam. Weâve all seen it. But what about the three-hundred-sixty-degree-under-the-leg slam? The backward-one-and-a-half-with-a-full-twist smash? There are so many players out there really pushing the boundaries of whatâs possible in the realm of slamming cards onto tables. We canât wait to see what people bring to the table in September.â

A Level 2 judge from Spokane, Washington, expressed his doubts about the propriety of the contest. âThis is just a bad idea all around,â he says. âJust terrible. Weâre supposed to discourage this sort of thing. Under the official IPG [Infraction Procedure Guide], this would constitute aggressive behavior not directed toward another personâunsporting conductâand would result in a game loss. Why would Wizards encourage this kind of behavior by sanctioning this event?â

When asked for a response, Garvey said, âWhat's unsportsmanlike about a good windmill slam with a thirty-second windup? There's going to be nothing but positive energy and good vibes at this contest. We hope that all contestants in this truly monumental and historic event will come away with an appreciation of how much more art and skill is involved in card-slamming than there is in attacking with a bunch of 1/1 Hawks.â

Savannah, Georgia â Julie Mahoney, thirty-one, says her husband, Dale Mahoney, thirty-four, has left his Magic cards all over the kitchen table one time too many. âThis happens every weekend,â she says. âHe and all his buddies get together on Friday night to play, and then he gets it in his head that heâs finally going to sort out his collection alphabetically, and when I get up on Saturday morning to cook the kids breakfast, this crap is all over the table. These things are four dollars for ten cards or something, and there are forty-two piles a foot and a half high! But I canât have a Coach purse because we canât afford it? Bullshit. Next time this happens, Iâm going to get a trash bag and just toss the whole mess.â