Login
0 Item
Advanced Search
Sign In
Create Account
"The Beatles can be considered the greatest rock band of all time - and still be underrated - at the same time."

I remember the weekend distinctly.

It was the first weekend when Khans of Tarkir was legal to play, and I didn't have a lot of new cards. I played a Selesyna Ramp deck topping up on Elspeth, Sun's Champion on Day One, and got demolished by an unanticipated Golgari version with Doomwake Giant and a more significant enchantments theme. Still, I did okay. Better, I wasn't worried - Day Two was Legacy, and for Legacy I didn't need any new cards.

I brought my not-quite-yet-"trusty" Goblin Guides and Legacy Burn. Good day overall, and I had a shot to win the Khans-inaugural Open for most of the day. One of my two losses was to eventual winner Bob Huang, who was playing lots of new cards:

In hindsight I probably didn't play the matchup tightly enough. I had a macro idea that Mono-Red was deeply favored over

, and didn't respect enough when he tapped one for his Treasure Cruise, or what this newfangled "Prowess" ability was all about. It ended up being one of those days where I'd play the narrow choices back for a while, but I kind of dismissed Bob's take as a fluke.

Then Bob's deck won basically everything in the format from that point forward. Personally, I liked having it as a boogeyman, as I was still convinced my pet Mono-Red had the advantage; but even if it did, that didn't say a word about the unrelenting stranglehold this archetype, and its near neighbors, had on the format. Treasure Cruise was banned in Legacy less than six months after first becoming legal in the format.

Around that time, Modern was not yet the runaway juggernaut of popularity it eventually became. But players were certainly interested, and waiting with great anticipation on the World Championships results. Patrick Chapin led the Modern portion (on the way to yet another Worlds Finals) with this:

A Modern take on Huang's deck. Sure. But the battle lines were even clearer at Worlds. This was a strategy that could apply pressure in multiple ways, retain its leads with light permission, or disrupt a combo opponent for just long enough... All while drawing three extra cards for one.

Was it Treasure Cruise?

Sure. Treasure Cruise was an overpowered card - especially in formats with cheap Blue cantrips, and Thought Scour in particular. But it would be a mistake to attribute all the Khans of Tarkir oomph to Treasure Cruise alone.

Monastery Swiftspear was the Izzet deck's silent partner, and a clear upgrade to its predecessor.

Prior to Khans, Izzet decks tended to look more like this:

Besides a philosophical move from Snapcaster Mage + Price of Progress to cantrips + Treasure Cruise, the main important shift was Goblin Guide to Monastery Swiftspear. Izzet Delver wanted more offensive 1-drops, and Goblin Guide was the next-best option after Delver of Secrets itself.

While the strategy had scattered success, it was always sort of at odds with itself. Were you drawing cards or letting them draw cards? It's not just that Goblin-to-Human Monk smoothed that element of the strategy up... A deck with so many cantrips could actually deal a lot more damage, while churning through itself aggressively (especially with Gitaxian Probe). The 1/2 would often be capable of more damage than the 2/2!

So, this is all nice, you might be thinking. But without Treasure Cruise, how good was Monastery Swiftspear, really?

Because none - absolutely none - of the immediate damage she did in large formats held a candle to Monastery Swiftspear in Standard.

That's okay, though. It took down two of the next three.

Pro Tour Fate Reforged doesn't really count for our purposes, being Modern; but Monastery Swiftspear still occupied 25% of the Top 8:

And with options like Splinter Twin and Amulet Titan available... Did you check out the pedigree of those Fire Gods?

Once we were back to Standard, nothing could stop Swiftspear:

I love the details on this one. Four copies of Mana Confluence to support essentially four Atarka's Commands. Dang's deck could make monsters and quietly accelerate its mana at the same time. Dragon Fodder was two mana for two bodies. Hordeling Outburst was three mana for three... Either one of these would deploy 1/1 creatures and wash out its cost in Stoke the Flames the same turn.

Joel took down Pro Tour Magic Origins in a Top 8 rife with Mono-Red decks. This tournament will always have a special place for me. Personally, it was my first time back on the Pro Tour since the birth of my son some ten years earlier, and my first individual Top 32.

Aside: If you want to watch a sweet little Swiftspear back-and-forth between me and then-teammate Sam Black (followed by an interview with YT) from this tournament, I promise it's fun:

Monastery Swiftspear wouldn't win any more Standard Pro Tours (at least in its first run, at least as far as I know), but would sneak in another Top 8, and in the hands of a pretty good player.

People used to talk a lot about the showdown at Pro Tour Dark Ascension that never happened. Jon Finkel didn't block the Wolf, so Brian Kibler went to the Finals, where he drubbed PV in the mirror. But had Jon blocked the Wolf? They say it would have been a battle for the title of GOAT. No shade on Kibs, of course (a Hall of Famer who won his second Pro Tour that weekend).

But at Milwaukee's Pro Tour Battle for Zendikar, PV and Finkel did meet, albeit merely in the Top 8 and not for the title. Jon got that one, but spiritually, you have to give it to PV's deck. While it had elements similar to Dang's from the previous year, this was maybe the apex Monastery Swiftspear deck of the original Standard run, grafting a potential combo kill with Titan's Strength, Become Immense, and Temur Battle Rage onto the already Prowess-capeble 1/2 haster.

For those of you who mostly think of Monastery Swiftspear as a tool of Boros Burn in Modern... We've barely scratched that part of her resume.

What I really wanted to get at this point was just how versatile she's been in contribution - and in the best decks over and over across larger formats; while being absolutely dominant in Standard with so many Top 8s and multiple wins in a two year period.

I don't know if Monastery Swiftspear is "the best" 1-drop of all time; but I think the fact that no one every suggests that she is says something about how underrated she must be given the overwhelming pedigree.

While she started out a Goblin Guide replacement for Izzet in Legacy, good old Taylor Swiftspear has settled into a partnership with Goblin Guide for Mono-Red Burn in that format. It might seem odd given the availability of Boros Charms and Lightning Helixes in bigger formats that the Legacy Red Deck opts for basic Mountains instead of Taigas and Plateaus... But you have to remember that's a room where Wasteland can ruin your day on turn two.

Again, starting off Izzet in Modern, Swiftspear has become primarily associated with Burn decks in that format given, you know, no Treasure Cruises any more. At this point you probably don't need me to paste a Modern Boros Burn build from any era, but if you're interested in sharpening your skills around the greatest archetype in its most hermetically congruent home, I'd invite you to look at any of my favorite articles I've done here on Cool Stuff:

The Chained to the Rocks Experiment (Boros Burn)

What Everybody Gets Wrong About Modern Burn (Rakdos Burn)

On Becoming a Fire God in Central Florida (Mono-Red Burn)

But I'd be remiss if I didn't share my favorite Monastery Swiftspear deck I ever played in Standard. It's probably not what you'd expect:

I loved that I could do so many things with this deck. I could come out with Taylor Swiftspear and Seeker of the Way, swing with both, and stare my opponent down. You don't dare, I'd say (but silently). They never dared. I could follow up with Brimaz, King of Oreskos or Heliod's Pilgrim.

I really loved this deck for the Heliod's Pilgrim part. You see, I was a Chained to the Rocks maniac even then!

I had a ton of burn to finish them off; Wingmate Roc to compete on power level or in mid-range grinding games... But I could essentially transform into Planeswalker Control after sideboarding! Sadly, Monastery Swiftspear would be spending the balance of the match in a pile of fifteen cards off to the side in that case.

This was a near-miss tournament for me. Third. So close. So very far away.

Why write about Monastery Swiftspear at all?

And not in a techy way like The Chained to the Rocks Dilemma or something like that? 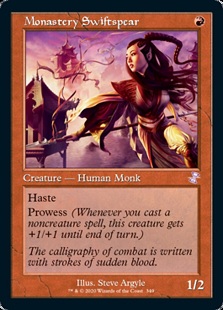 She is, of course, the single most exciting card in Time Spiral Remastered, for me. That ancient border sure looks hot, doesn't it?

So, here's my The Monastery Swiftspear Dilemma...

On the one hand, that throwback border is something I want to be shuffling, isn't it? One thing that I absolutely love is to play FNM variants and other alternate art cards. I used to go crazy for foreign language cards, back before everything was black bordered. Especially if you're not playing "your own deck" it is a way to personalize your deck, make it your own even when it's someone else's.

On the other hand... These are $12 out the gate for a card I already have!

But when you consider we don't currently seem to have any copies of any of its three other printings... Maybe $12 is going to look like the friendly side of supply and demand a week from now.

Yet my old Khans of Tarkir set... They're the ones, aren't they? The ones that went to Vancouver with me, to earn my first individual Top 32. The ones that went to Utah with me. My second-ever PPTQ win. My Regionals Top 8. Countless local Top 8 and cash finishes. Buying a new set almost feels like cheating.